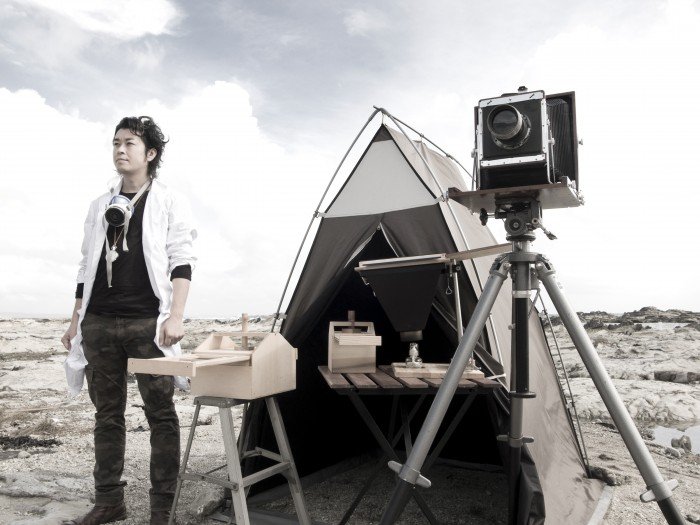 Fall 2014 International Artist-in-Residence, Takashi Arai, answers questions about his work, his life, and his time at Artpace.

Where are you from?

I’m from Japan, born and based in Kawasaki, the southern neighboring city of Tokyo.

When did you start getting interested in art?/ Was there a defining moment you experienced that indicated art should be your chosen path?

I remember that I’d been totally possessed by the paintings of Bruegel and Bosh when I was 5-6 years old. Every time my father’s car was caught in a traffic jam, I was engrossed in their books of paintings. Since then, my parents (they are art teachers), often brought me to the exhibitions anything related to fine art, but I think I was never excited because museums are always like hospitals.

I regained my lost interest in art when I was 20 years old, with the great paintings, sculptures and incredible texts by Alberto Giacometti. I chose biology as my major in my university, since I was interested in the origin of mankind and the origin of nature. Meanwhile a Polish writer of science fiction, Stanisław Lem was always haunting in my mind — because his stories always cast the questions about the boundary of our observable world.

When I found Giacometti’s works and writing, I was deeply impressed by that artists also can engage such fundamental questions with their art works. I was particularly interested in the boundary of “seeing” so I grabbed camera and started shooting without any preliminary knowledge of photography. It was reckless leap and I even dropped out from school.

Give three words that describe Artpace to you.

Tell us a little about your work.

When I took my first trip to US six years ago, I found a photography book of nuclear tests. The tremendous atomic cloud photographed there, which seemed overwhelmingly strong and somehow beautiful. If art is something that we cannot stop demanding to overpower us, or to transcend human knowledge and death, perhaps the new suns unveiled by thermonuclear bombs are some extreme realization of this demand—even if this is something that leaves an unremovable curse on the earth. In any case, such were my thoughts at that time.

The daguerreotype, irreproducible and etched by the light emanating from a particular place—its surface literally carved in 100-nanometer relief— I call it as a “micro-monument”. A monument is an object which surface has been marked by traces of contact with a certain event, and which arouses new emotions and recollections in each individual who comes into contact with it. The encounter is, necessarily, a personal experience and can not be collectively summarized with a single meaning or interpretation.

Since after the nuclear disaster suddenly rose in Fukushima in 2011, I started my journey to collect the monuments which are stigmatized with the nuclear catastrophe. For our generation Fukushima is the first and only direct exposure to the nuclear issues. Everything has been coming into my own reality, and I couldn’t help myself get involved in a realtime consequences in Fukushima in the aftermath. I’ve been frequently visiting Fukushima and documenting visible and invisible impact brought by nuclear contamination. This is the opposite point of view from the way of sensing divine “beauty” on H-bombs tests.

I’m here in Artpace to complete my new project on B-29: one of two US bombers manufactured in the end of the WWII and actually dropped atomic bombs in Japan. Facing massive problems like nuclear issues, we tend to refer statistics. For example, Atomic bomb dropping to Japan was justified by the logic that could quicken Imperial Japan’s surrender and minimize the total number of casualties. This calculation might not be wrong mathematically, but in any case there is no way to bridge the ideas of megadeath and individual sacrifice. Fifty-four nuclear reactors in Japan were also built with the similar statistics. Since 1950’s Japanese government rapidly built nuclear plants in the remote areas to revitalize high-growth economy in the capital. Provinces are sacrificed and critical risks are concealed.

There are always two extreme sides of technology. And in the societies dominated by economy, technology is always proceeded with the statistics of utilitarian viewpoints.

My mission is to breakdown massive issues into observable world of individuals, with the extraordinary details and durability of daguerreotype.

How do you find inspiration?

Everything in my daily life always bring me inspiration. I’ve been continuing “Daily Daguerreotype Project” to keep my feet on the ground, and trying not to overlook the details of my daily life and start searching “something new”. Since our view and imagination are so limited, I believe the most creative attitude is to concentrate on realities and details brought to your ordinary life.