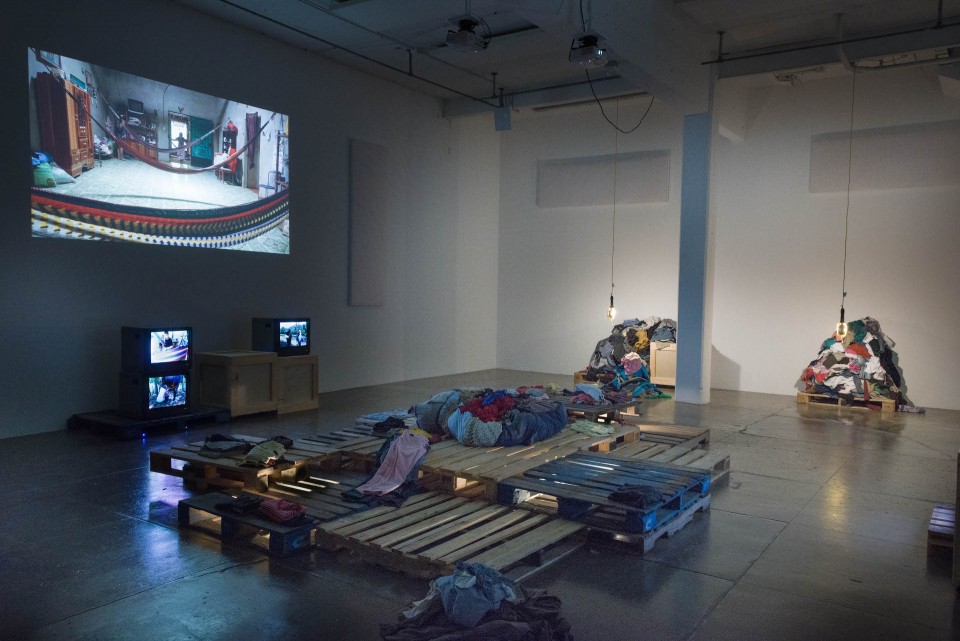 Emphasizing the production, preservation, maintenance, and transmission of culture as work, the performances question what bodies are afforded leisure and how the meaning for being productive changes depending on whose body is performing what.

Blurring the line between work and leisure, the works seek to recalibrate how we collectively define and embody those terms today. The event will also serve as the launch for Francis Almendárez’s book titled “Reconciliation in the Search for Home,” a small publication of creative texts in relation to his visual art work.

About the Artists
Anthony Almendárez
Anthony Almendárez is an interdisciplinary artist working in music composition, video art, sound, noise, improvisation, performance, fixed media, and film. His works challenge the hierarchy between audio and visual stimuli confronting their respective stereotypes in relation to identity and within the frame of narrative. AlmendÃ¡rez ultimately seeks to inject new modes of storytelling that are inclusive of histories and collective memories of those thriving along the margins of society. His works have been performed at various events and venues including: EchoFlux 19, Prague, Czech Republic; Conservatoire Maurice Ravel, Paris, France; Houston Cinema Crawl, Alabama Song, Nameless Sound + Lawndale Art Center, Houston, TX; The Reading Room, Dallas, TX; SPLICE, Kalamazoo, Michigan; and the Florida School of the Arts. He earned a BA in Music Education from California State University, Dominguez Hills, CA, and an MA in Music Theory and Composition from John Marshall University, Huntington, WV.

Francis Almendárez
Francis Almendárez is an interdisciplinary artist who traverses the intersections of history, ethnography and the arts, using them as tools to address memory and trauma, specifically of migrant and queer bodies of Central American and Caribbean diasporas, in attempt to make sense of and re-construct identity. Being the product of a family of intergenerational migrants and having to frequently re-locate due to financial instability, he attempts to transform spatiotemporal dislocation and intersectionality into agency, resistance and autonomy by vocalizing and embodying the experiences of the marginalized, disenfranchised, or liminal Other. His work, ranging from video installation to performance and text, incorporates music and storytelling, and brings to the foreground time, labor and rhythm. Combining personal narratives with those of his grandmother, Almendárez uses the biographical to collapse and juxtapose past, present and future, subtly touching upon underlying, overlapping and recurring themes from postcolonialism to migrant labor to gender roles and motherhood. Working from the vantage point of both insider and outsider, he observes, he listens, and he collects. Then, he transforms the material from the personal to the political – and finally – to the poetic, in the effort to re-present and re-historicize alterity, and provide an alternative to the dominant Western narrative.

Xavier Gilmore
Xavier Gilmore currently resides in San Antonio, Texas with a Bachelor’s of Fine Arts degree from the University of Texas at San Antonio. As an interdisciplinary artist he employs the use of experimental sound and performance as well as traditional practices in his exploration of fragmentation and cultural identity. Gilmore has exhibited internationally at the Capilla del Arte, Puebla City and the Museo Soumaya in Mexico City, Mexico. He has also exhibited regionally at Artpace, The McNay, Bluestar Contemporary, Hello Studio, and the Luminaria Contemporary Arts Festival, and will be an Artist-in-Residence at the Vermont Studio Center in 2020.

Nick Long
Nick Long is a singer/songwriter and guitarist based in San Antonio, Texas. Taking cues from Woody Guthrie, Lead Belly, and the black and white movies he used to watch with his grandparents as child, Long explores ideas in the blues, rock and roll, and folk music. Known for his work as Lonely Horse with drummer Travis Hild, and his solo project We’re Brothers We’re Brothers. Long has had the honor of winning the Brooklyn Afropunk Battle of the Bands in 2014 and has performed on many national stages including CMJ Music Marathon in New York and Red Bull Sound Select.

Andrea “Vocab” Sanderson
Andrea Sanderson performs as “Vocab” in her hometown of San Antonio, Texas. “Watching her perform, the word “hero” comes to mind. And not “hero” for the sake of just skill, but for her work in her community: Sanderson teaches poetry workshops, mentors, builds up and encourages artists to pursue their art, and gives them platforms to showcase their talent.

Sanderson’s interest in other people’s art and artistic development became a passion of hers, and she started curating her own shows and creating platforms for other artists to hone their craft by hosting open mics.” (From The San Antonio Current, Jan. 16, 2018.)

Her poetry is published in, The Texas Observer, January 2016 Issue, Pariah Anthology SFA Press, March 2016, and Sycorax’s Daughters, Cedar Grove Publishing, January 2017. She released a long anticipated single, “Waiting For Me,” in December of 2017. She received awards, Performer of the Year, Influencer of the Year, from Project Forward, and Dream Voice, from the Dream Week Commission, and most recently The People’s Choice Award granted by Artist Foundation of San Antonio.

This performance is free and open to the public.