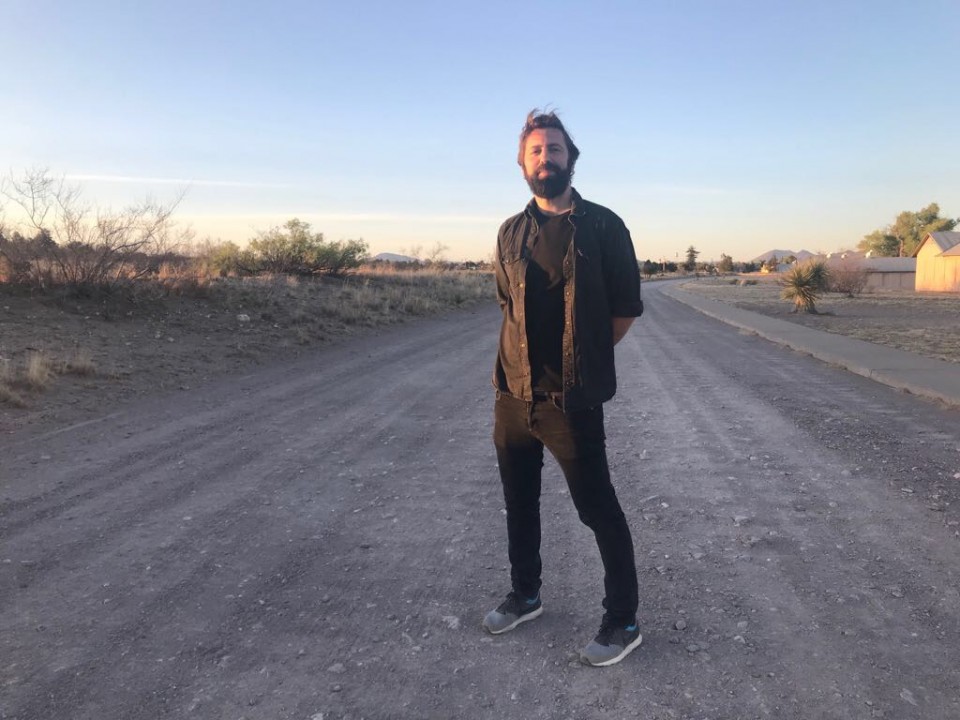 Juan Canela is Artpace’s Spring 2018 Curatorial Resident. Now two weeks of his residency, he has conducted studio visits with several Texas artists across the state. Read about his experiences meeting them below.

Before traveling, everything is expectation. I wonder about what I will find, how the city will be, the landscapes I will pass, and the people I will meet. I imagine exhibition spaces, artists’ studios, conversations, and artworks. I think about the kinds of artists I will meet, the topics they tackle, and the techniques they use. Having a month-long residency program with the objective of knowing the artistic context of a region like Texas is a unique opportunity, and it is difficult not to create expectations.

The truth is that, beyond the stereotypes, I did not know much about this land. I knew Texas had a desert and that there are cowboys and weapons. I knew it was the state where Geroge W. Bush was governor and that the majority of the population votes Republican. But once I received the invitation from Artpace, I began to investigate and find out that this is one of those essential places in the world to understand some of the most urgent matters that we are facing as a society.

So here I am, with the aim of navigating all these issues through the eyes of Texas artists. 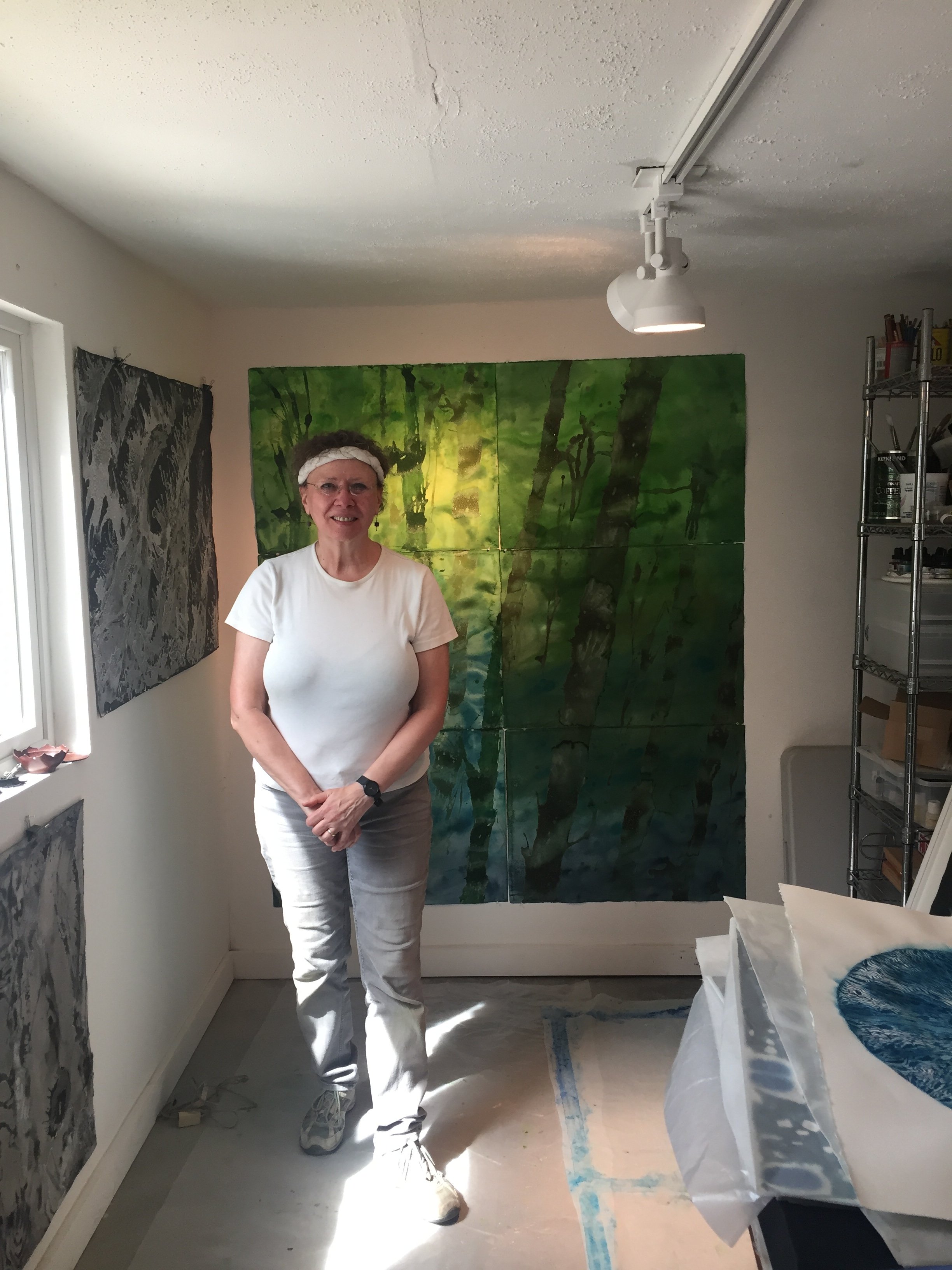 When I arrive at Madeline Irvine’s atelier, she is on the floor working on a series of mangrove paintings made with crystallized salt. We talk about the Antrophocene, global warming, extractivism and the sea. Irvine has been painting with sea salt crystals and ink for years, reflecting different formations and marine inhabitants. In her latest series she focuses on corals, mangrove, and kelp forests which are ‘buffer zones’ between the force of the ocean’s waves and the shore, a physical transition between water and earth. Today, those important ecosystems are in danger thanks to the rise of water temperature. 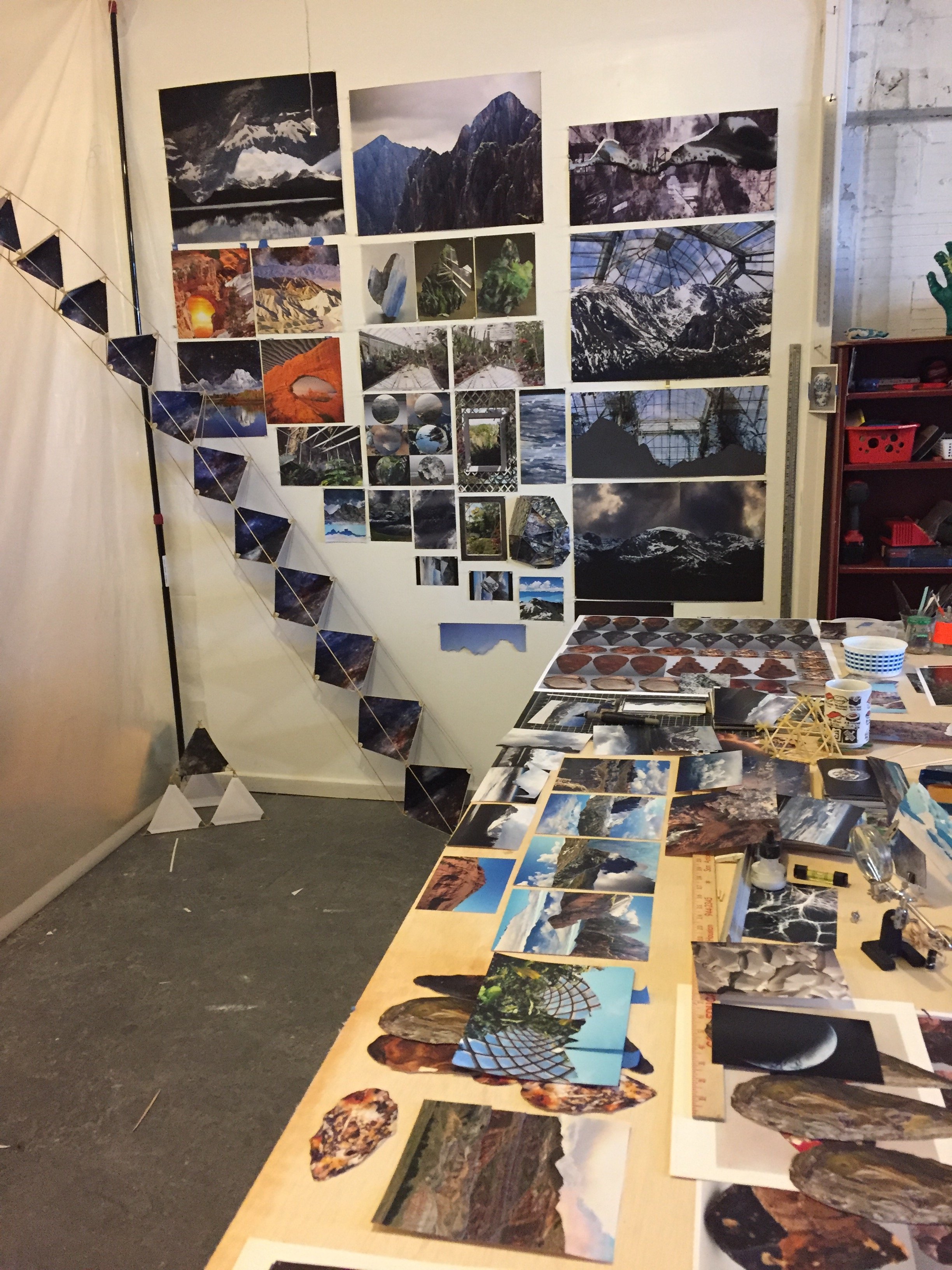 Entering Megan Harrison’s studio at Blue Star Arts Complex is like walking through a strange fragmented landscape, a prehistory of the future made of vegetables, minerals and ghostly architectures. While we observe the delicate collages and the disturbing paintings, the conversation runs among trips, places, geology, materials, uncertainties and intuitions around artistic practice and life and, above all, time. I leave there thinking about our relationship with architecture and nature, about how much time a mineral takes to form, how much time a tree needs to mature, and how a turtle perceives time. I think about the many different “times” that inhabit the universe and, again, how insignificant humans are. 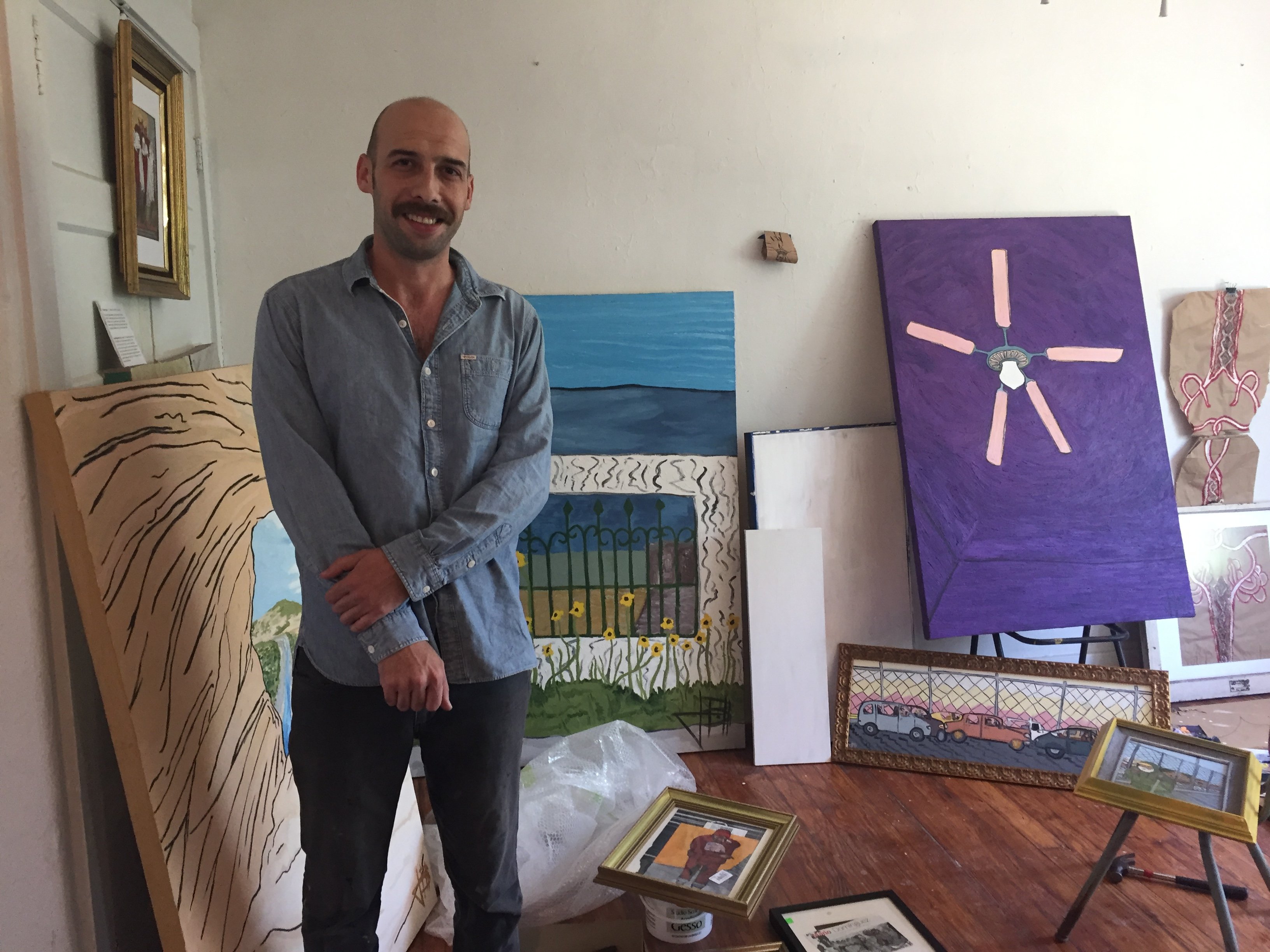 As insignificant as I felt driving through the Texan desert, crossed by the Rio Grande, which acts as a frontier. This is where José Balli has lived all his life, between one side and the other, navigating the two contexts and adapting himself to both. He told me that he has spent at least 1/8 of his life on the bridge that connects McAllen in the United States to Reynosa in Mexico. Balli was a geologist before, and worked for an oil company doing expeditions in the desert. And from there, from the desert and the border, his paintings emerge reflecting desert landscapes, disturbing interiors, characters that inhabit the international bridge, day-to-day scenes of the border, and even collages made with the skin of a snake that he himself killed and ate. 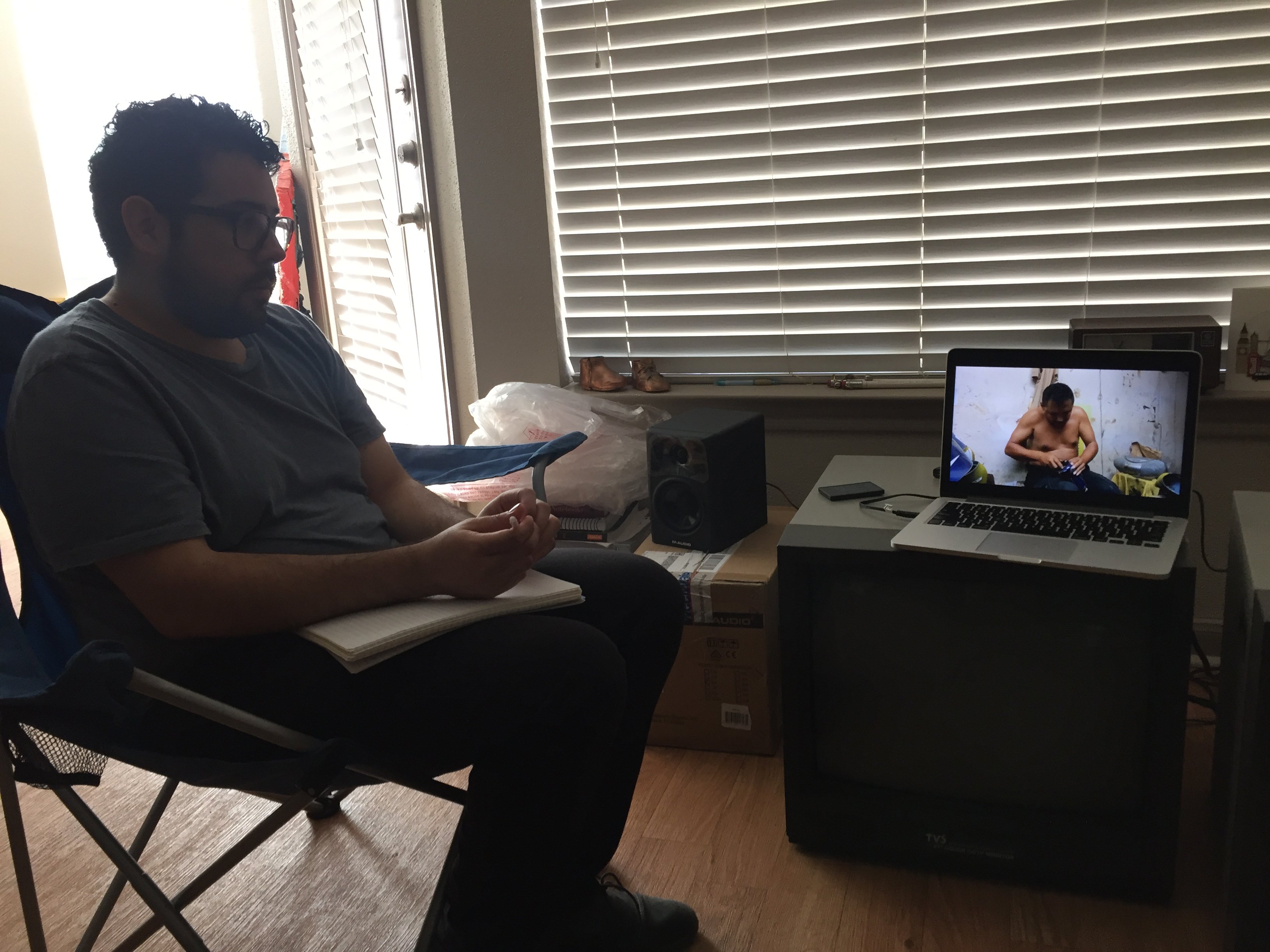 That desert must have crossed at some point in the past with the grandmother of Francis Almendarez, protagonist of one of his striking video installations, in which she narrates her experience working in the fields of Los Angeles after having emigrated from her native Honduras. The vital and heartbreaking voice of his grandmother is accompanied by images that the artist has recorded in different places in Central America. While we eat a delicious meal prepared by his mother, Francis tells me about his life journey to Houston, the difficulties and joys, and his plans to re-record a series of video-portraits of manual workers and artisans in Central America. 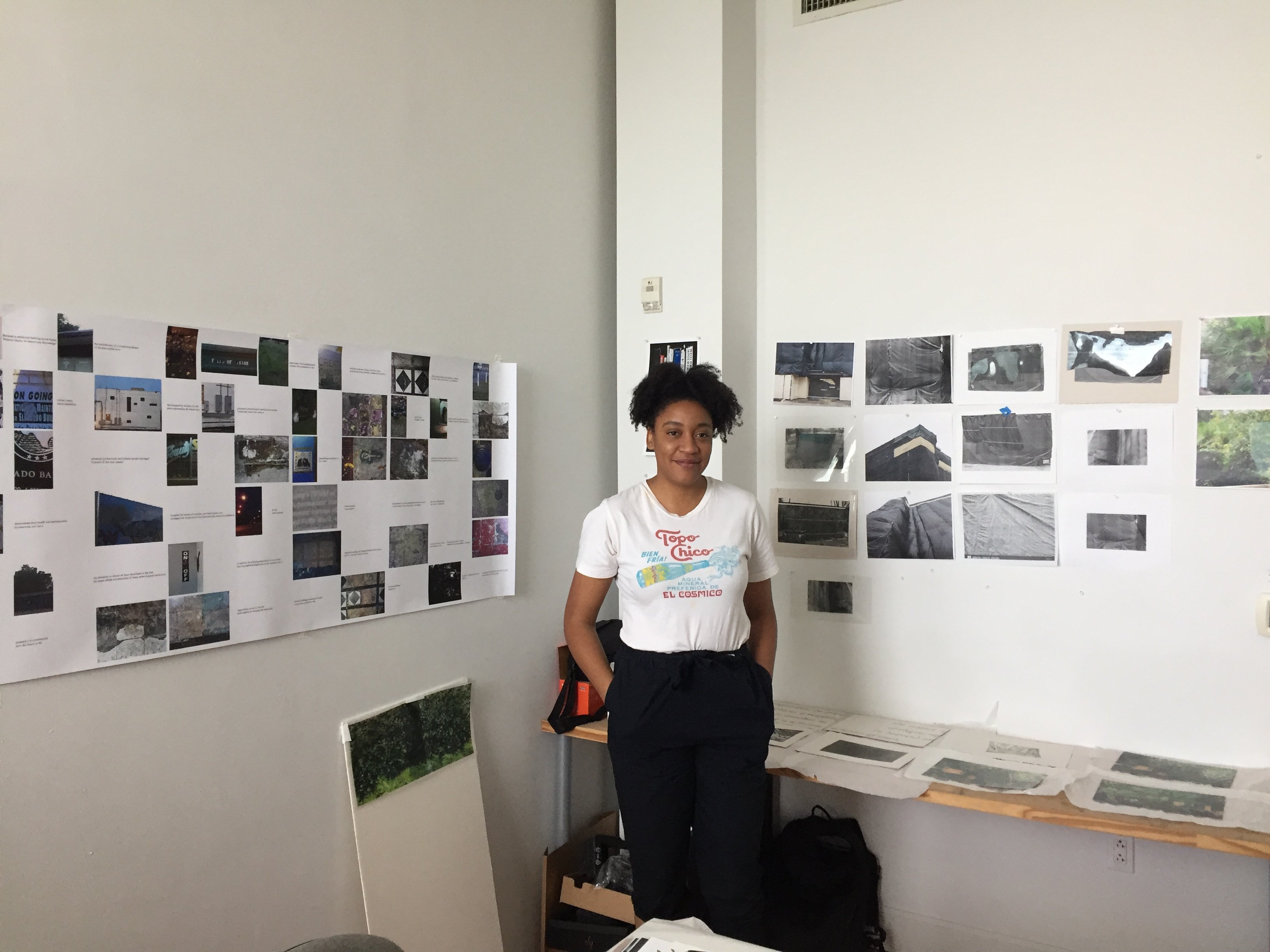 After getting lost in Houston freeways, I arrive to Regina Agu’s Lawndale Arts Center, where images meet words to generate fragmented stories that affect the construction of the natural and urban landscape of the Gulf of Mexico. We talk about the different communities that inhabit the Gulf, such as African-American, Native American, or Latino, and how they live in those geographies. Regina reflects on how to use psycho-geography techniques from a race, gender or class perspective, and we imagine how to rethink the world beyond national borders. In one of her latest works, a long 80-foot panoramic photograph printed on vinyl, she documents a group of dune sand prototypes built from the sargassum that regularly accumulates on the shores of Galveston. Again, another of those algae that are disappearing rapidly from our seas because of climate change. 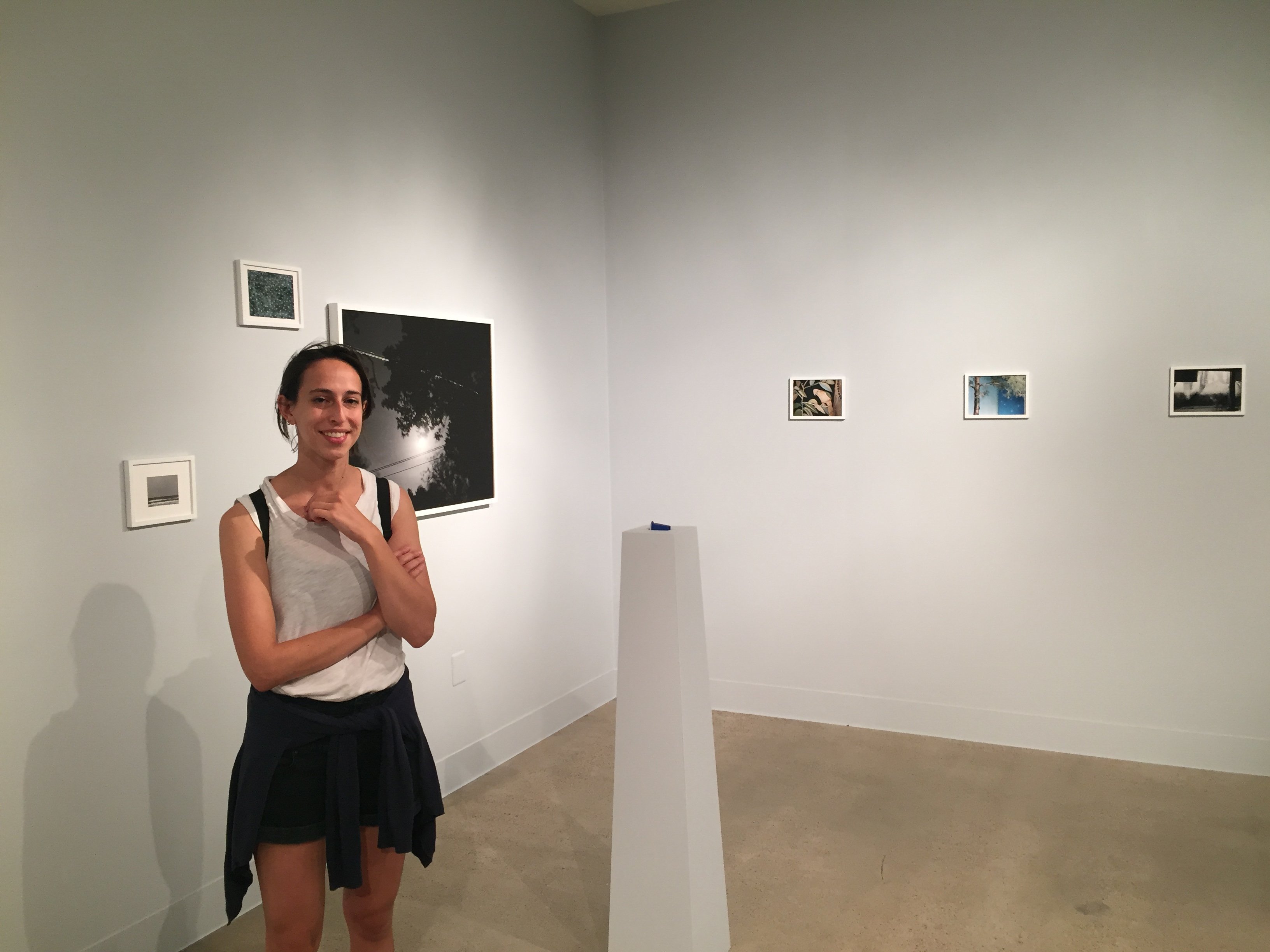 Natural, urban and rural landscapes. Leaves, branches, cactus, earth. Plots, textures, patterns. The scanned and fragmented image of a parrot that repeats itself and almost disappears on paper. Another parrot stamped on a cushion. Photographs of photographs intervened with objects inhabiting small half-frame key-chain viewers creating a feeling of fluidity. The moon with grain like the vanished head of a statue. Anika Steppe tells me in her studio of the Visual Arts Center at UT Austin how she uses photography to try to make sense of things, approaching the unknown and the impossibility of a final and close understanding of the world. 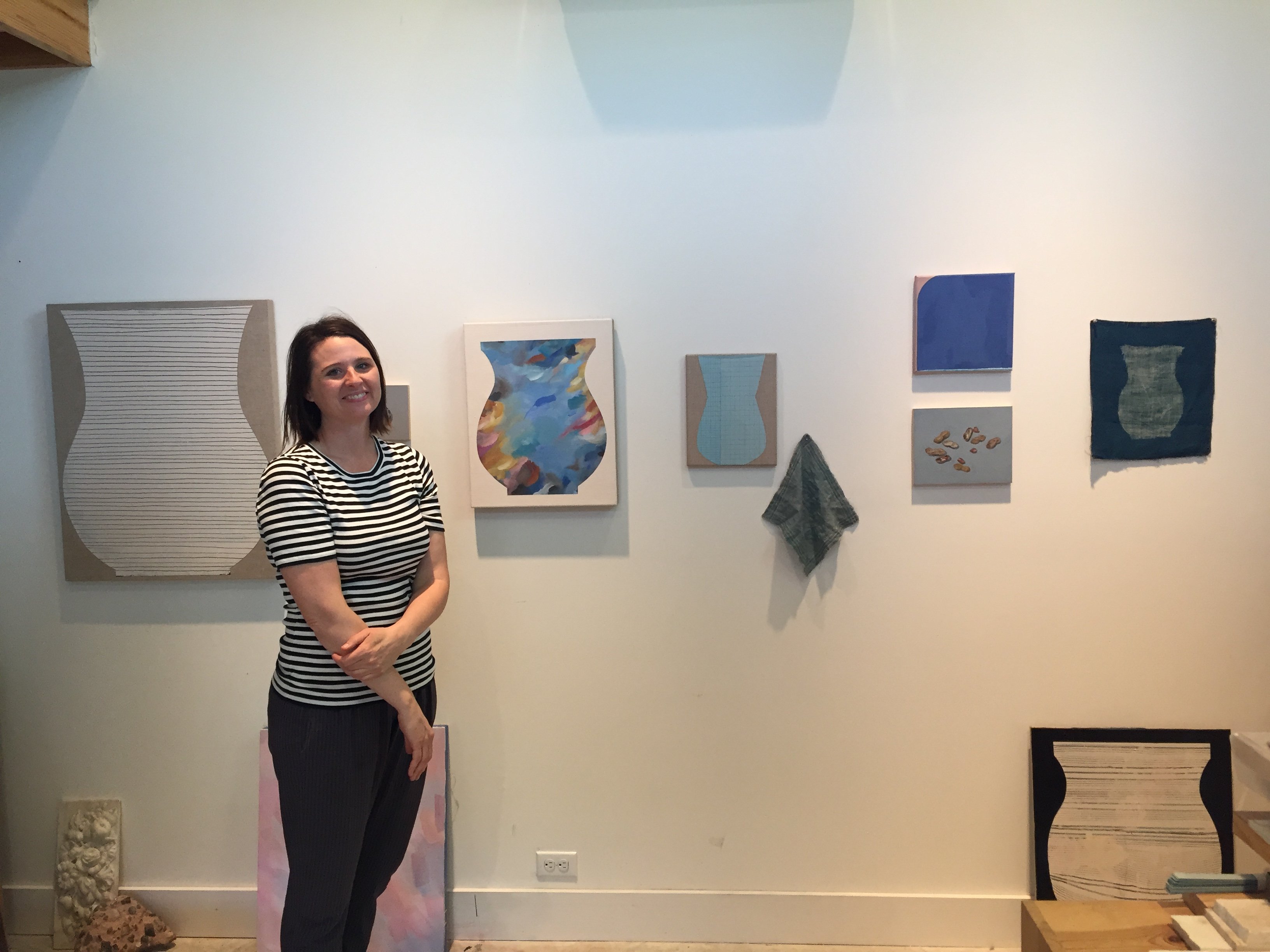 About the unknown and the ineffable we also chatted with Jessica Halonen in her Austin studio. On the origin of the color blue, its connotations and readings, and how it makes dialogue in her latest project with the last paintings by Manet, small canvases in which vases with bouquets of flowers appear. From here, Halonen generates rudimentary and archetypal forms that delve into alchemical investigations around blue. In her work, the familiar mixes with the inexplicable, science with magic, history with illusion. 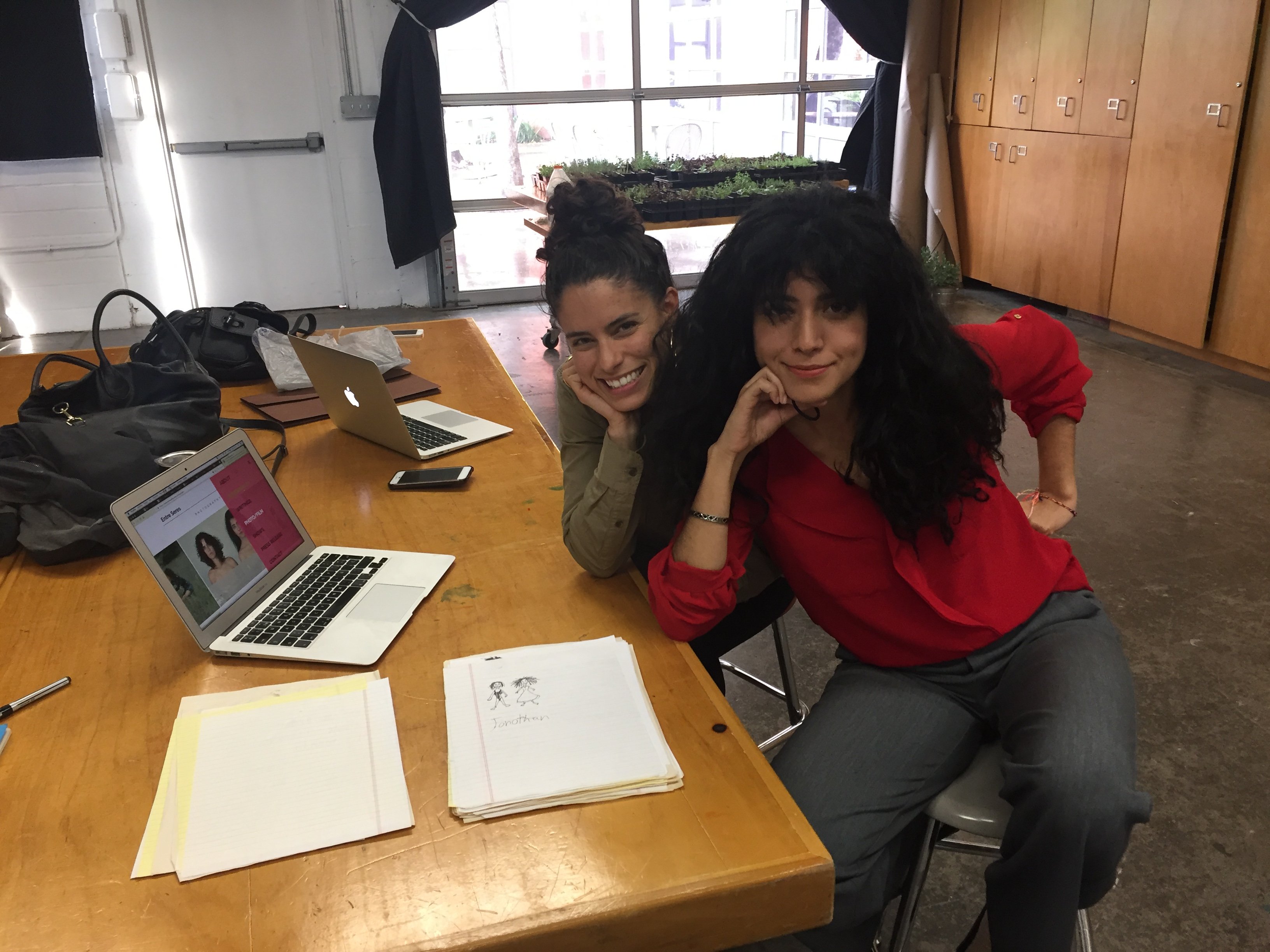 Flor Ameira Parada and Ashley de la Montaña Casillas
Flor Ameira Parada and Ashley de la Montaña Casillas have been involved for some time with Entre Seres, a collective that works around performance and photography to open common spaces for dialogue with the public, challenging the place destined for women in Tejano culture. We talk about the patriarchal society in which we live, the differences and similarities of women in various geographies, or the difficulty of changing inherited habits. And we reviewed the fantastic writings by women in their performances in San Antonio and Austin, in which they create room and opportunity to enunciate issues that perhaps do not come out in the spaces of daily life.

Now that I am in the middle of my residency, the topics I preconceived have begun to disappear, and the complexity of a place like Texas emerges. The proximity of the border, the colonial history of the place, the overlapping of different cultures—Native American, Mexican, Spanish, North American, African American—and the relationships that are established within the disparate natural environments make Texas one of the those key places on Earth to which we should carefully listen.