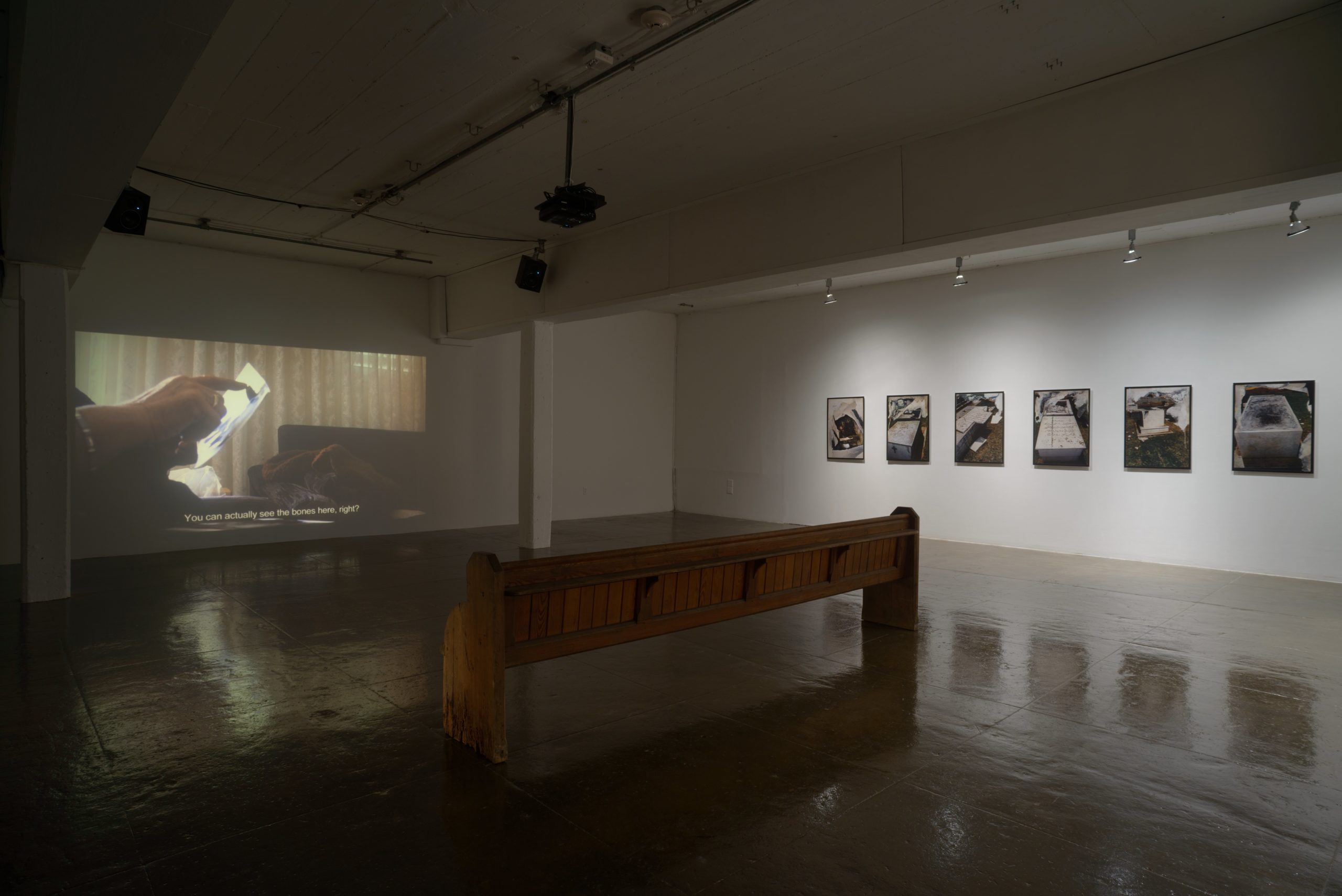 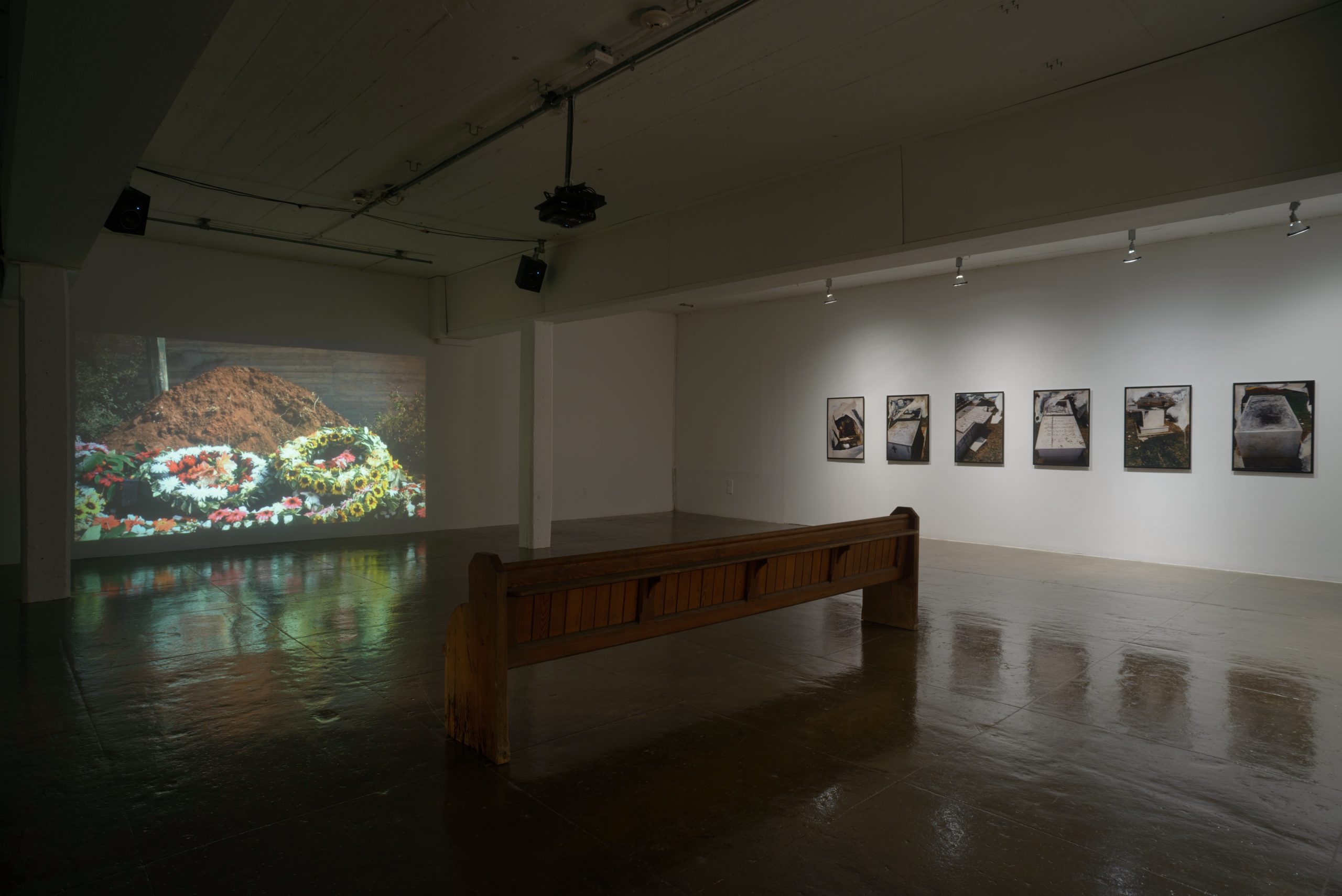 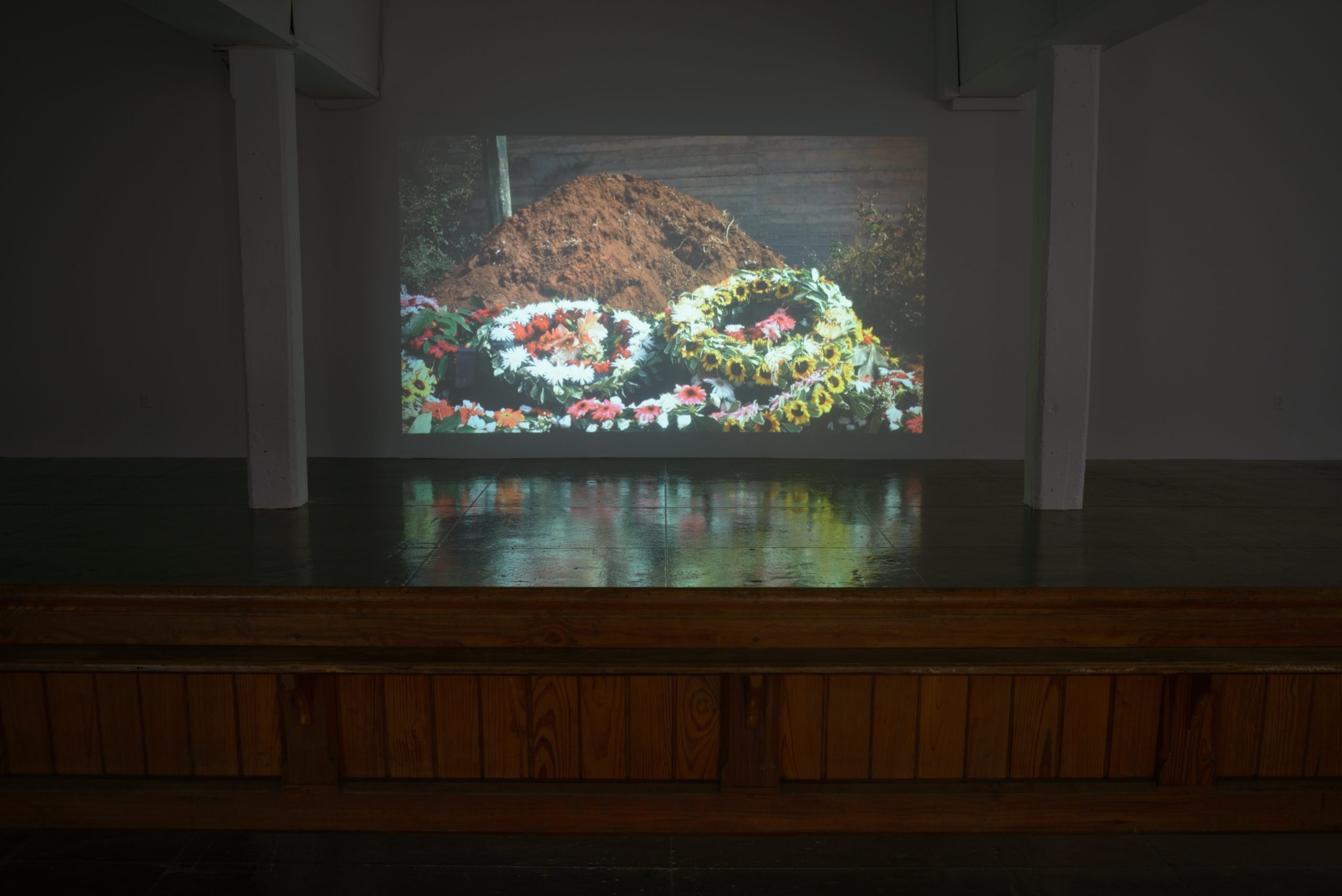 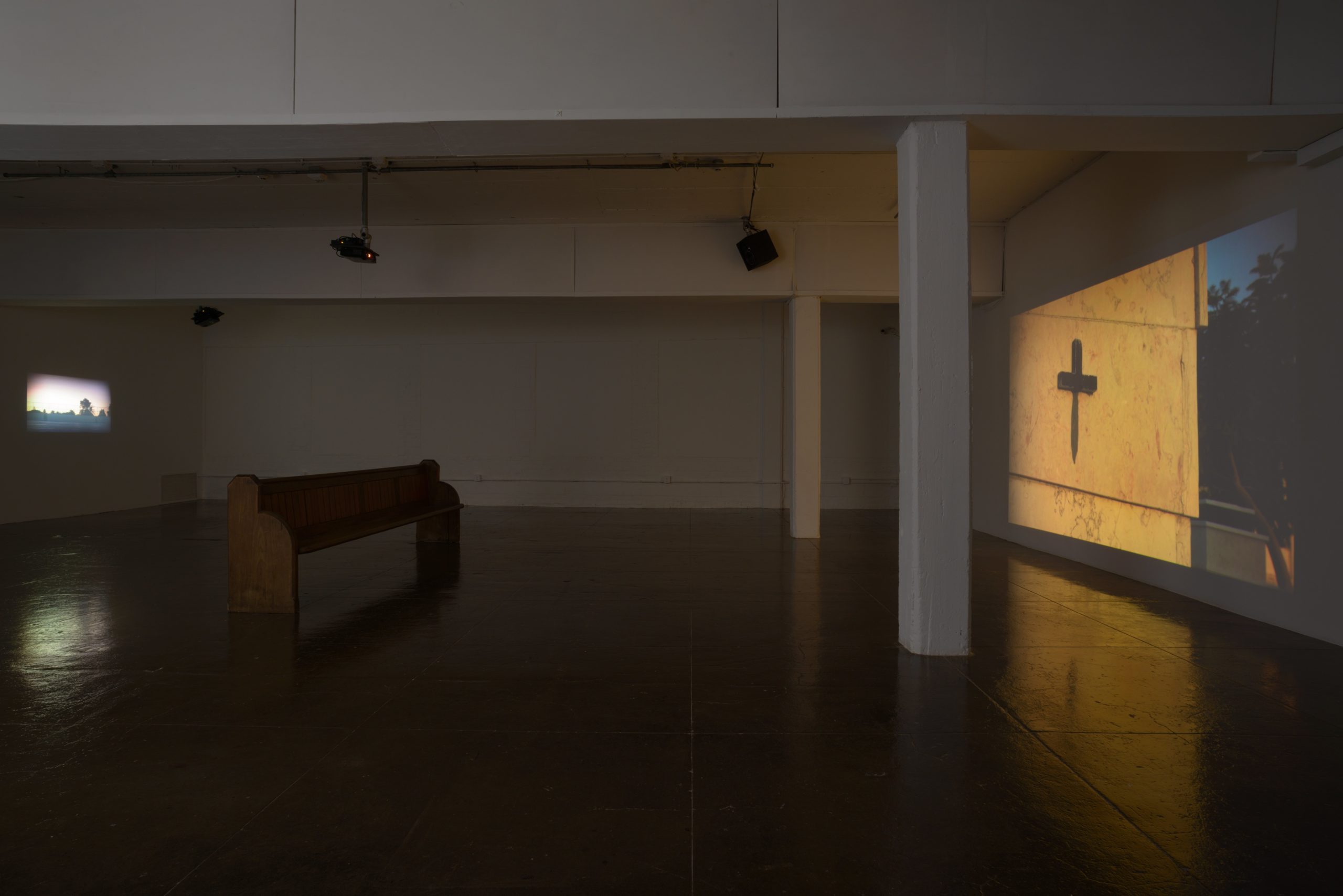 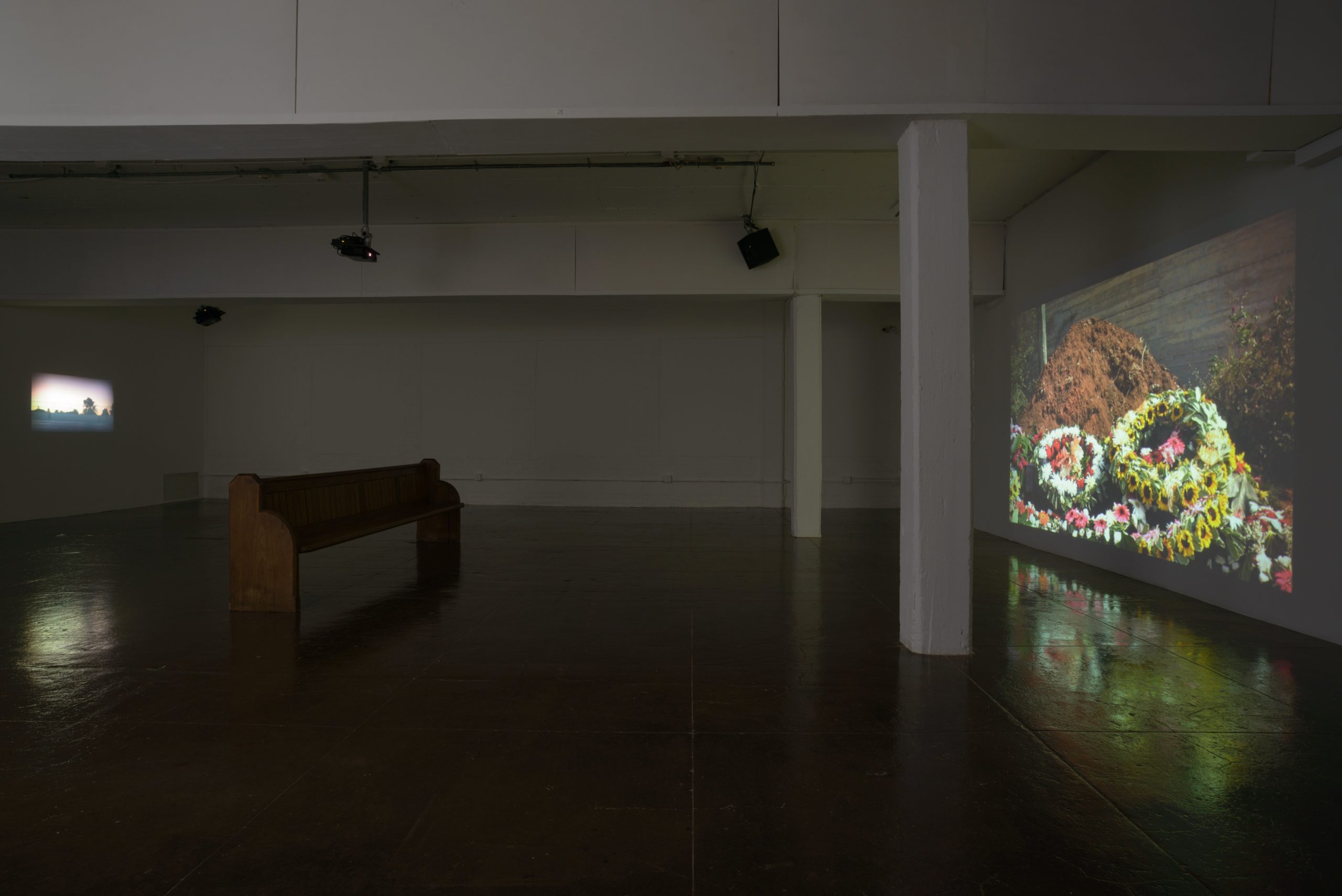 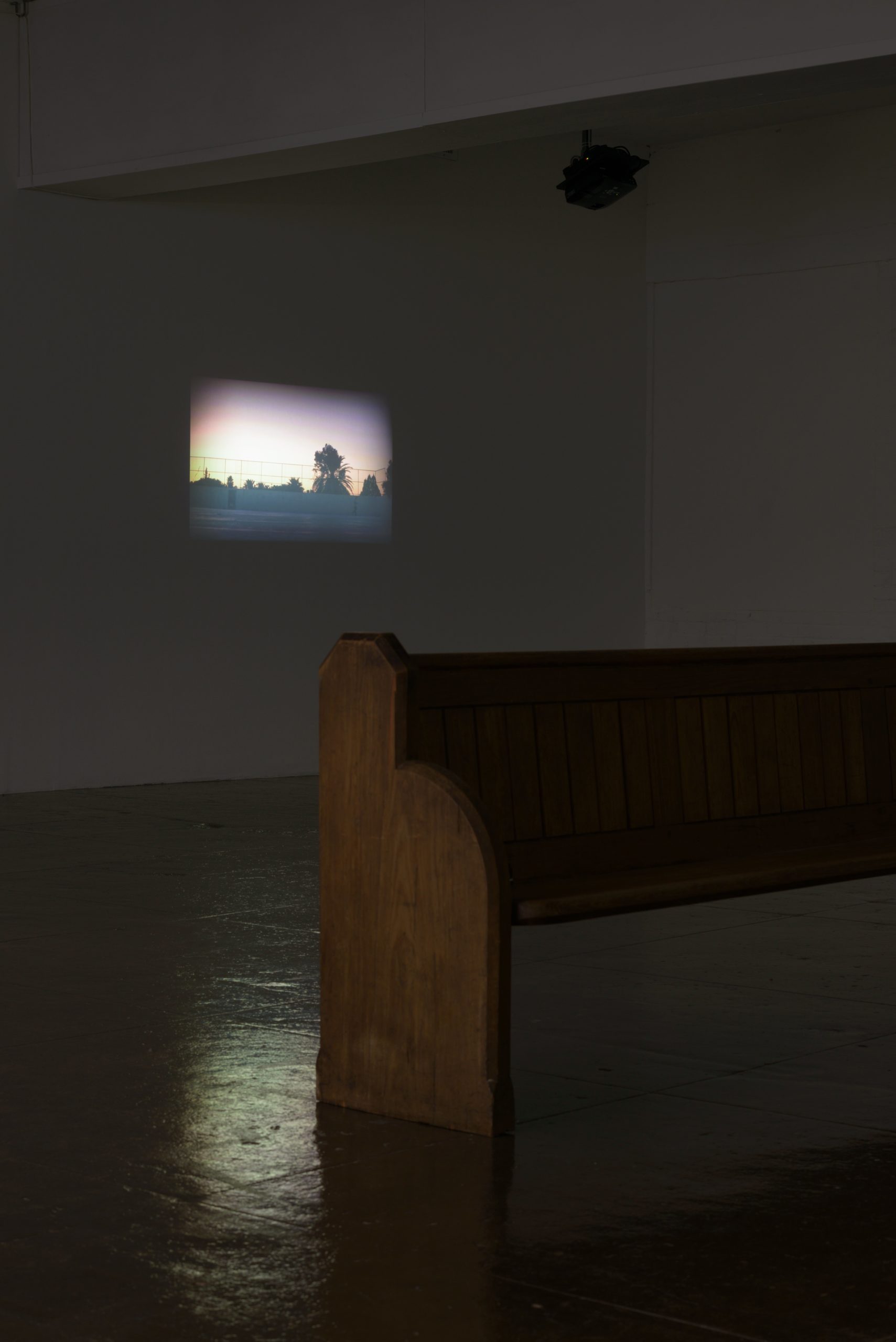 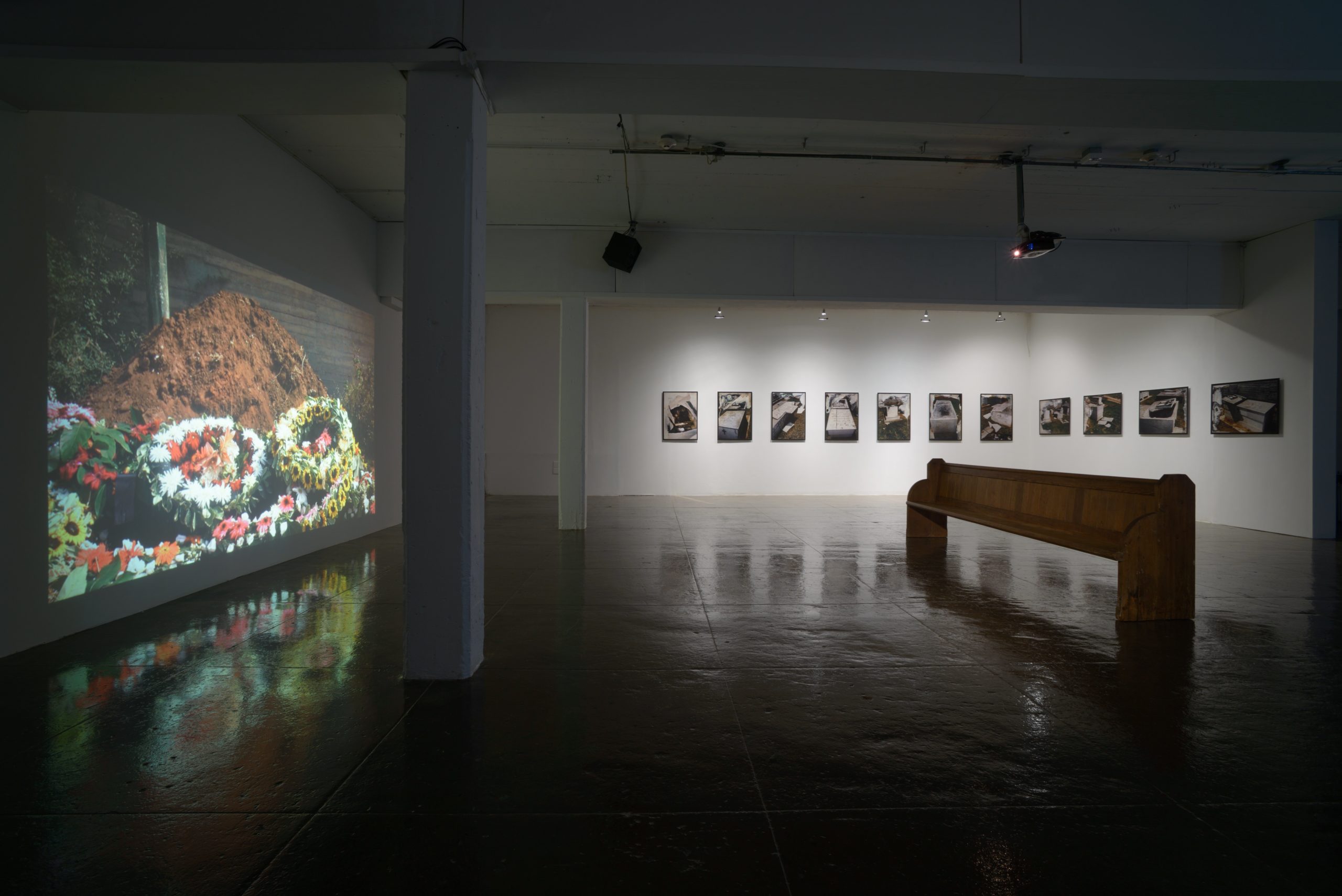 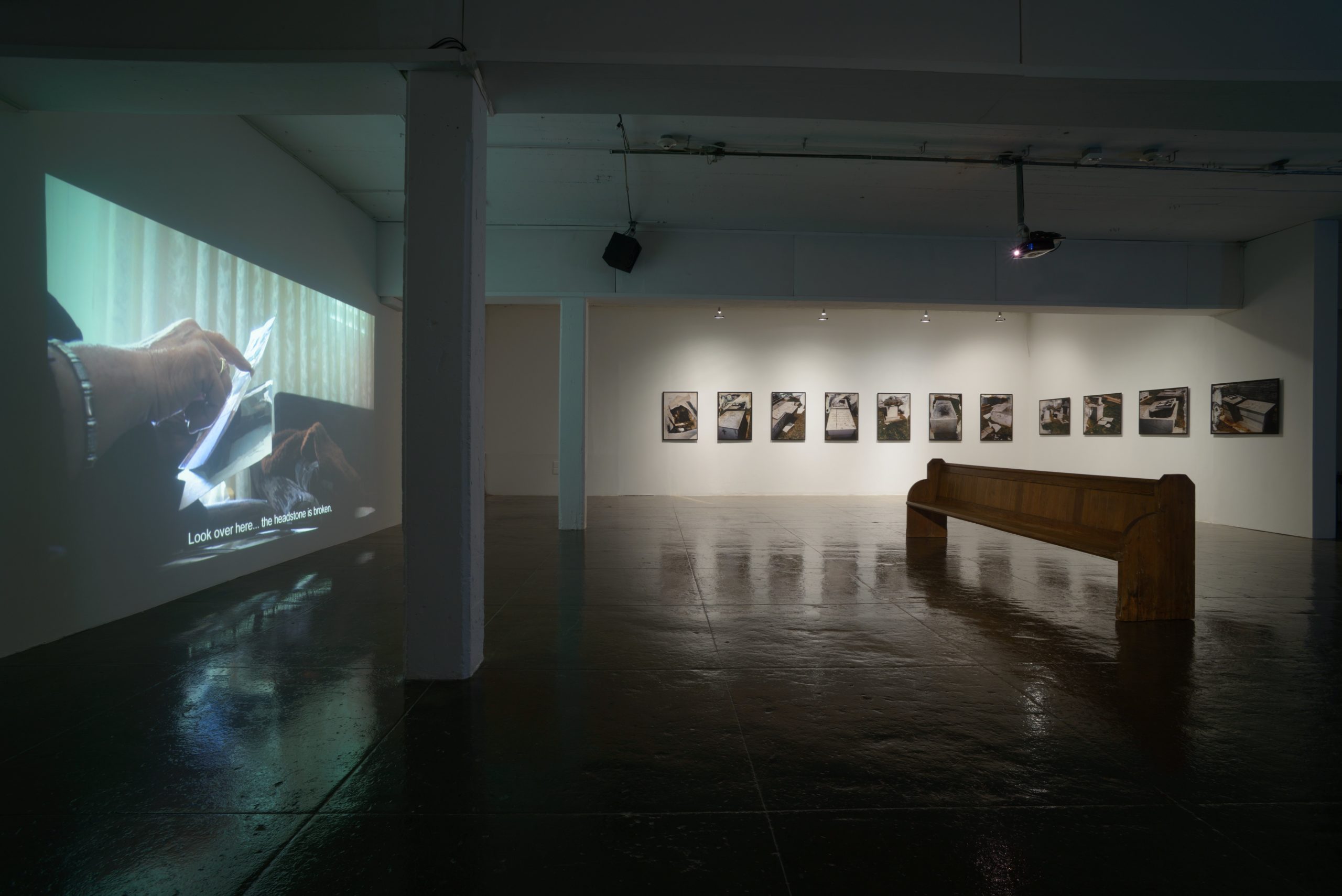 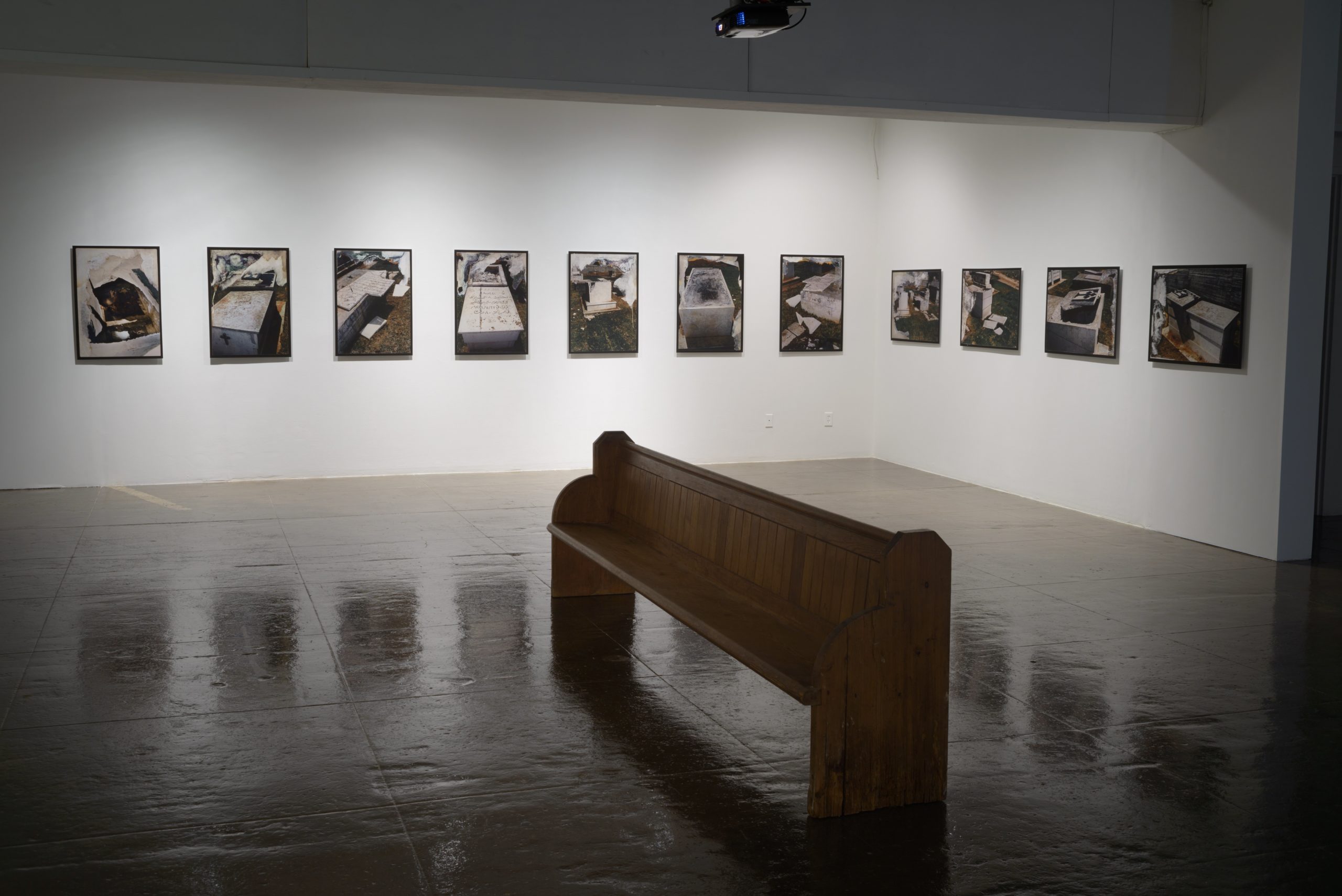 Untitled, 2012Todd Johnson35 3/8 inches x 25 ½ inches each35 3/8 inches x 25 12 digital photographsTodd JohnsonTodd JohnsonSource: NIKON D800
Offering a reverent, subdued space to reflect on the story of his grandfather’s memorial and the larger narrative of the marginalization of the Christian-Palestinian community, central to Guez’s 40 DAYS is the destruction of the cemetery in Lod. Projected in front of a wooden pew, his video weaves interior views of the Monayer home with scenes at the hospital, the cemetery, and Jacob Monayer’s grave—as well as his memorial service inside a local Eastern Orthodox church. In one scene, Samira Monayer, Guez’s grandmother, shares her husband’s original snapshots of the desecration that occurred years before in the cemetery. Stored in a kitchen drawer and subsequently dampened and stuck together, the photographs have to be torn apart by Samira as she identifies—in fluent Hebrew and Arabic—the destroyed graves of her mother, Jacob’s parents, and other family members. On the wall of the gallery space, enlarged scanograms of the images detail gravesites with broken crosses, defiled inscriptions, and broken tomb covers, exposing the remains of the deceased—damaged photos referencing destruction within destruction. A second video, projected on the wall opposite 40 DAYS, is a short loop of a man walking to the cemetery at sunset, offering a rhythmic reprieve from destroyed gravesites and familial grief. Guez’s use of personal storytelling in his exhibition is a compelling tool to give voice to previously unknown pieces in the history of Palestine and Israel.

Dor Guez’s process at Artpace included reviewing and editing video footage documenting the days before his grandfather Jacob Monayer (1920-2011) passed, and the memorial services that occurred 40 days later. (In the Eastern Orthodox Church, souls of the deceased are believed to wander the Earth for 40 days after death, when ascension of the soul occurs; special prayers at the gravesite and in the church are then held in memorial of the departed.) 40 DAYS combines intimate video works with prints of destroyed gravesites in the Christian-Palestinian cemetery in Lod, a town between Tel Aviv and Jerusalem. The images originate from Guez’s ongoing work maintaining the first Christian-Palestinian Archive, a growing collection of archival documents pertaining to the Palestinians who were dispersed from—and those who remained in—Israel after the 1948 War. He incorporates selections from the project into his installations as “scanograms” or manipulated ready-mades created by layering three different scans into one image, giving each part specific light, color, and depth. The scanograms in 40 DAYS are enlarged versions of the photographs Jacob Monayer took to document the cemetery’s destruction to file with the police. 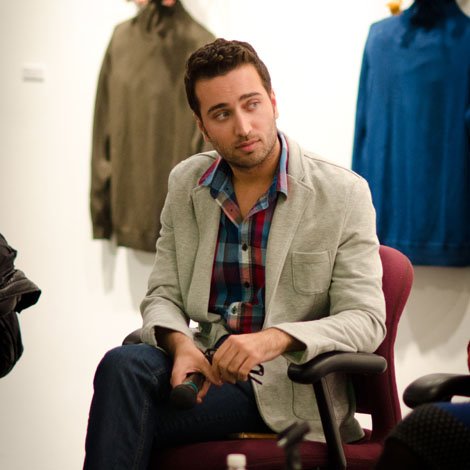 Through installations that incorporate diverse media such as video, photographs, archives, and scanograms, Dor Guez focuses on issues of cultural identity and ethnicity surrounding his homeland. Drawing on personal experiences and the complex history of the Christian-Palestinian minority-an ethnic group within the larger Muslim minority-in the Middle East, his work provokes questions about the larger sociopolitical climate in the Middle East and the lives of marginalized groups in conflict areas. For exhibitions such as 100 Steps to the Mediterranean at the Rose Art Museum at Brandeis University in Boston (2012), The Nation’s Groves at Tel Aviv Museum of Art (2011), and Al-Lydd at Kunst-Werke Institute for Contemporary Art in Berlin (2010), he integrated photographs of the ancient Arab city Al-Lydd (today’s Lod) and the surrounding landscape with video featuring three generations from the Christian-Palestinian community.
Guez is a lecturer in the History & Theory Department at Bezalel Academy of Arts and Design in Jerusalem, and a researcher of archives affiliated Tel Aviv University, where he received his PhD in photography. In 2009, he established an archive devoted to the Christian-Palestinian minority of the Middle East, which he incorporates into his installations. His work has been the subject of solo exhibitions worldwide, among them shows at the Petach Tikva Museum of Art and the CCA in Tel Aviv. His work was presented at the 12th Istanbul Biennial; the 17th International Contemporary Art Festival SESC_Videobrasil in Sao Paulo; the 3rd Moscow International Biennale; and more recently at Palais de Tokyo in Paris; the Bucharest Biennale; and the Benin Biennial. An overview of his work-his first major museum exhibition in the United States-is on view at the Rose Art Museum through December 9, 2012. 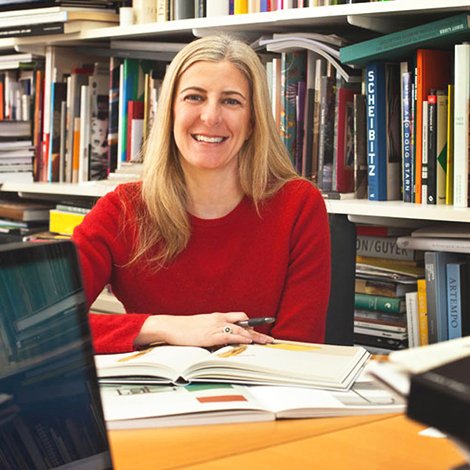 Heidi Zuckerman Jacobson is the Director and Chief Curator at the Aspen Art Museum. From 1999-2005 she was the Phyllis Wattis MATRIX Curator at the University of California, Berkeley Art Museum and Pacific Film Archive, where she curated more than forty solo exhibitions of international contemporary artists such as Peter Doig, Tobias Rehberger, Shirin Neshat, Teresita Fernández, Julie Mehretu, Doug Aitken, Tacita Dean, Wolfgang Laib, Ernesto Neto, Simryn Gill, Sanford Biggers, and T.J. Wilcox. Formerly she was the Assistant Curator of 20th-century Art at The Jewish Museum, New York, appointed in 1993, and curated Light x Eight: The Hanukkah Project, Contemporary Artist Project: Kristin Oppenheim, and Louis I. Kahn Drawings: Synagogue Projects which traveled to The Israel Museum, Jerusalem.
Zuckerman Jacobson has lectured extensively on contemporary art, independently curated exhibitions internationally, and served in numerous advisory capacities at The Louis Comfort Tiffany Foundation, The MacArthur Foundation, The Joan Mitchell Foundation, Creative Capital, and The Art Council, among others.
She received her BA from the University of Pennsylvania and MA in Art History from CUNY Hunter College. A graduate of Christie’s Education and recipient of a diploma from the Royal Society of Art, London, Zuckerman Jacobson has taught at UC Berkeley, CUNY Hunter College, and is on the faculty of CCA as a professor in the Masters of Curatorial Studies program.
Photo by Jim Paussa 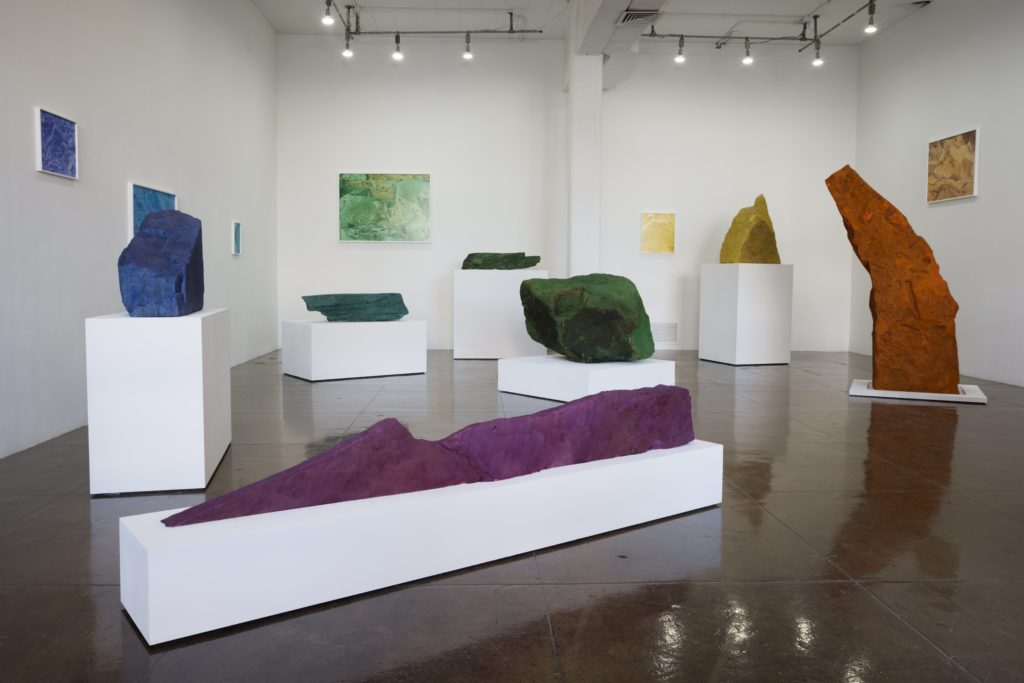