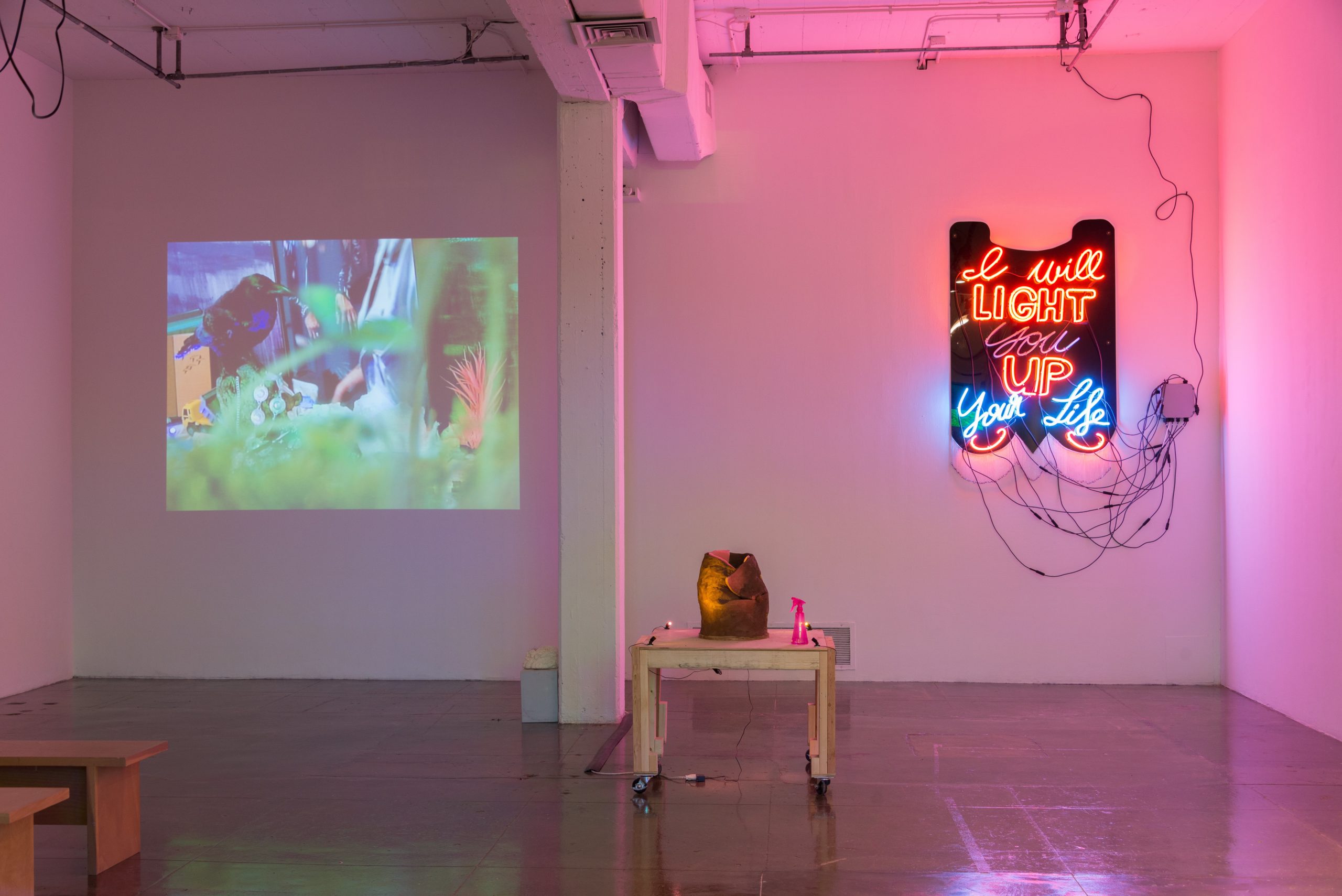 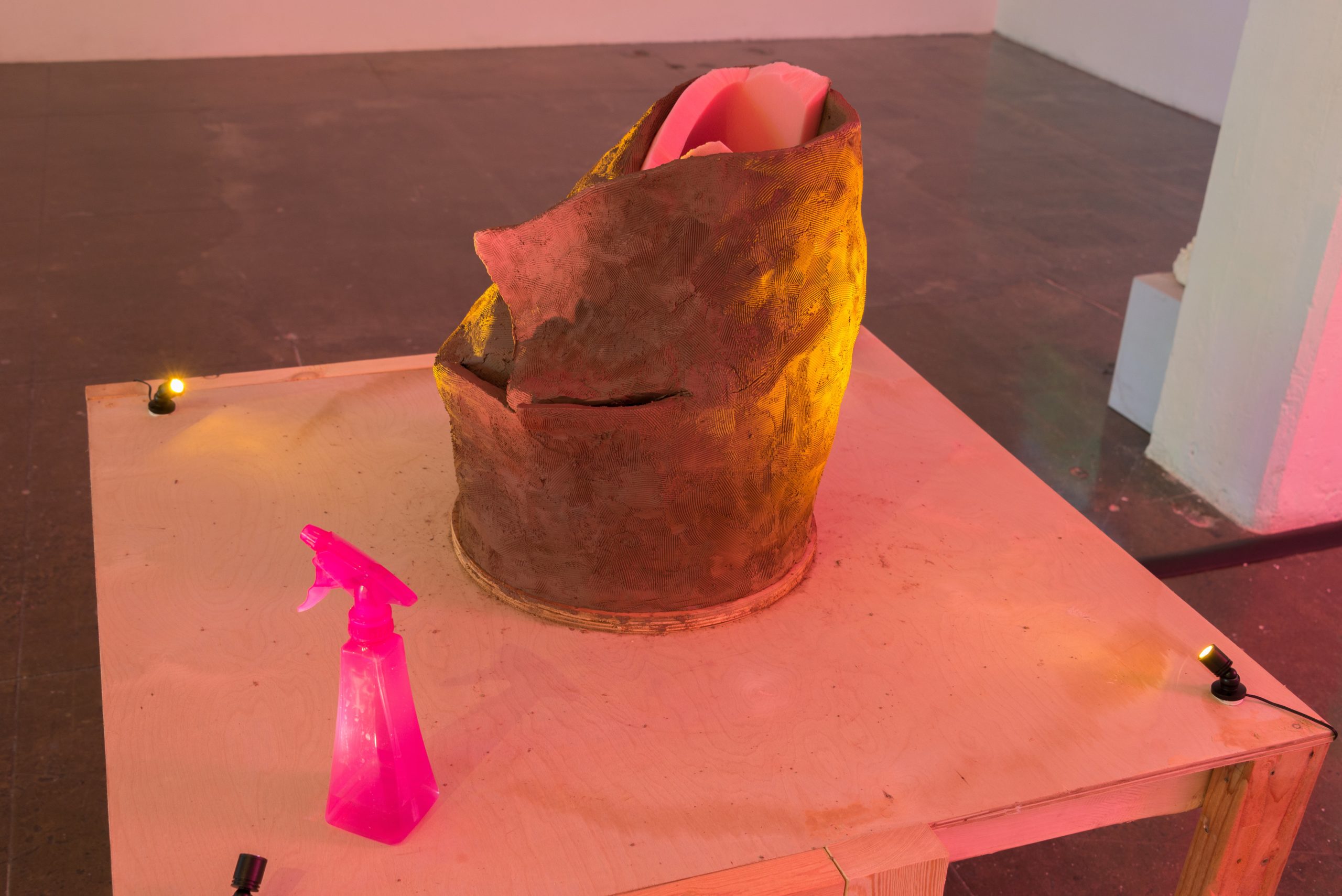 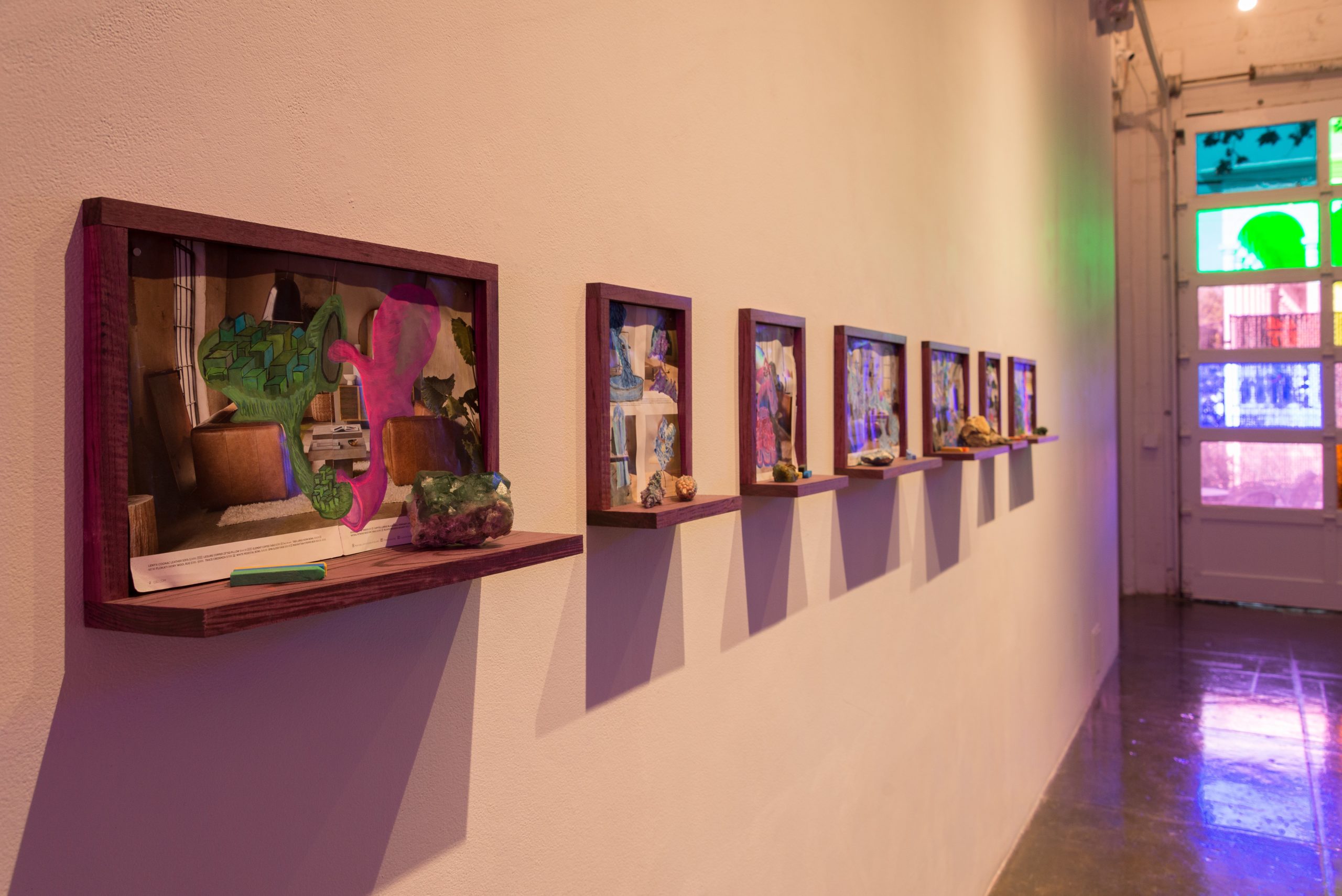 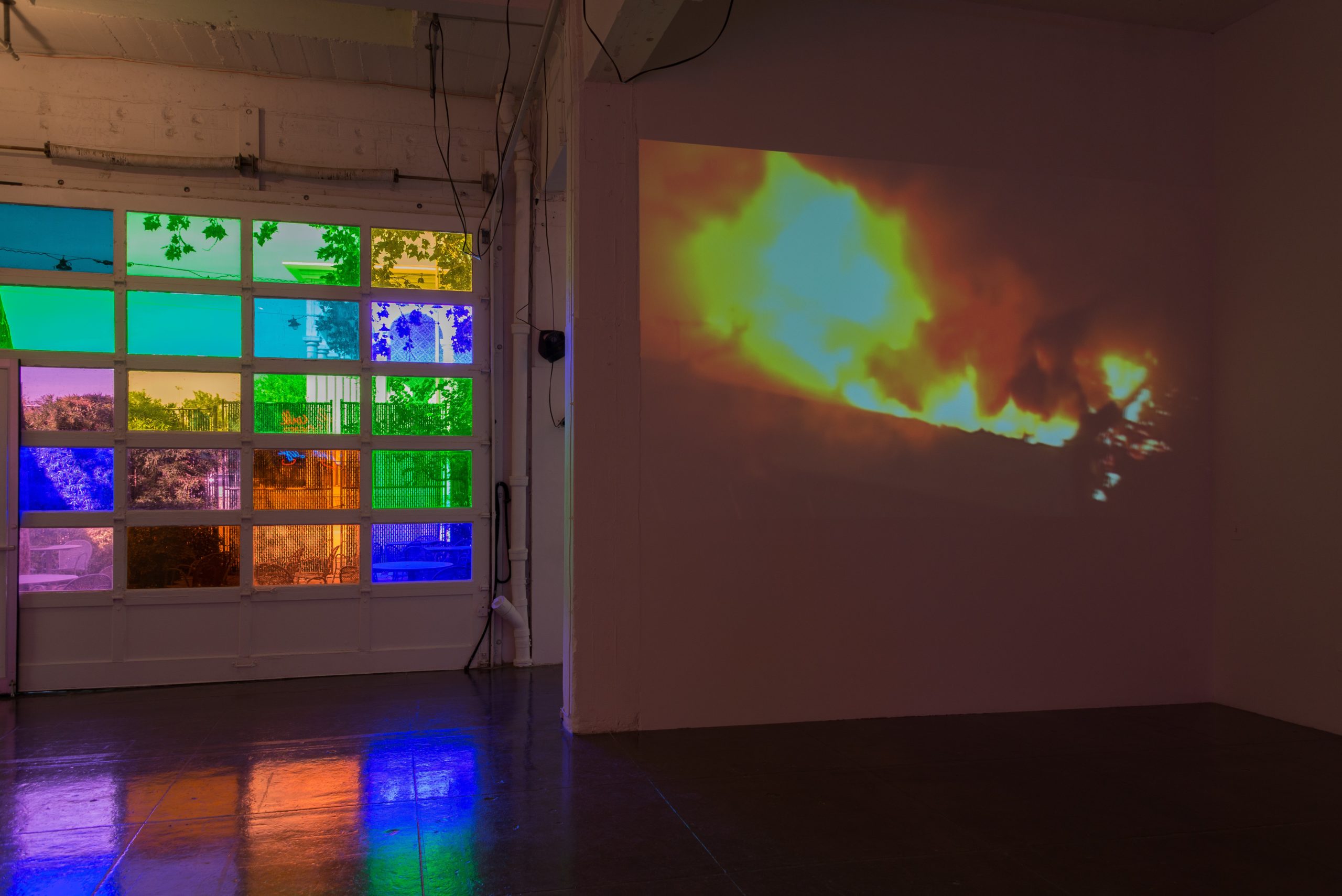 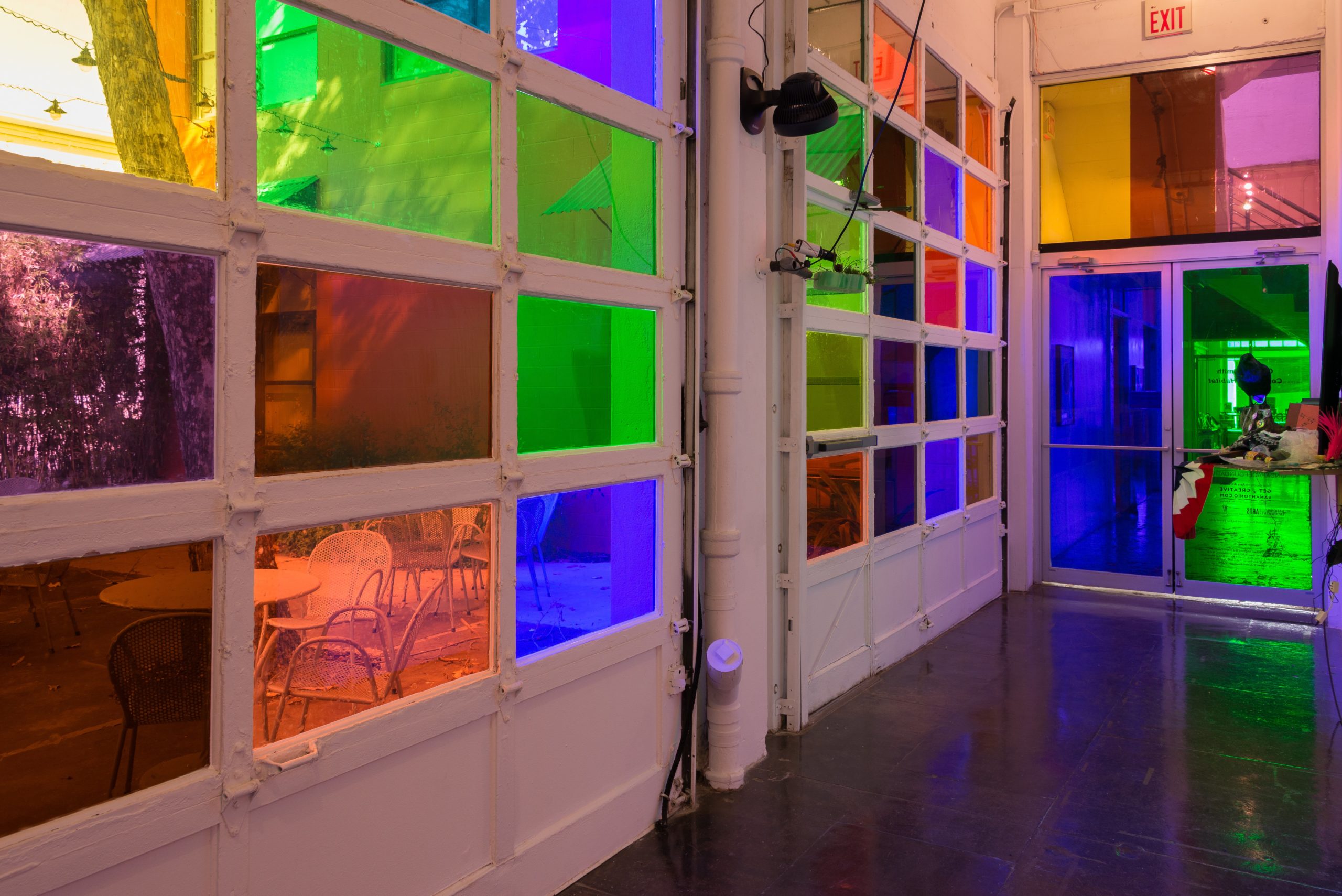 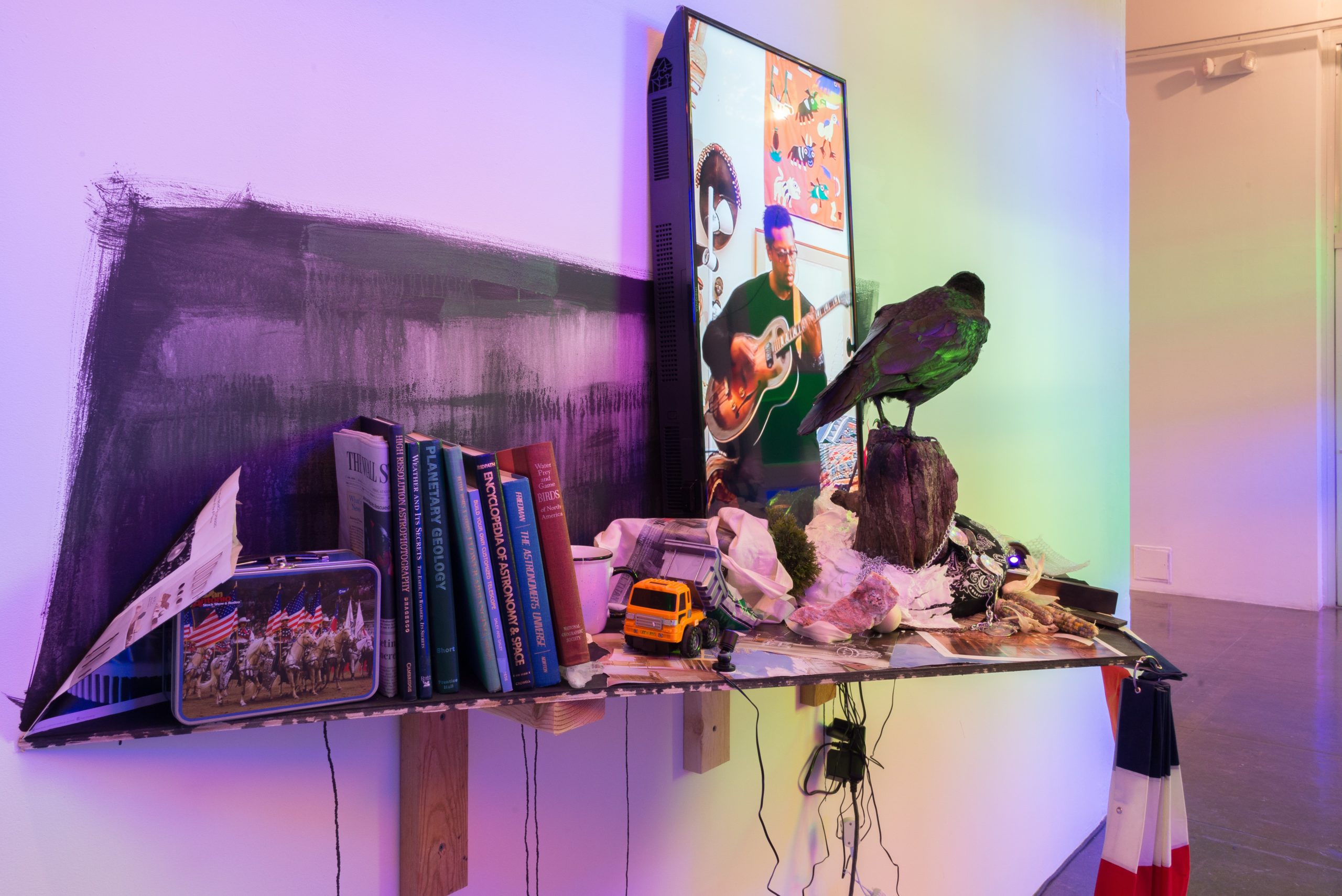 Cauleen Smith’s Contingent Habitat unfurls for the viewer gradually, inviting them to move throughout the space and consider every object, image, and intervention with the same intentionality she employs throughout her process. She presents both two- and three-dimensional “habitats,” none of which are crafted to render reality. Contingent Habitat envelops the viewer in a continually changing environment (via the changing light through multihued films on the windows) and offers an intimate and homey atmosphere.

In Smith’s thoughtful assembly of objects for Procuress (titled after a 17th-century Johannes Vermeer painting of the same name), the taxidermied crow is collecting objects in her own space, what kind of space exactly, is left unclear. A live video of the diorama is projected onto the other side of the wall. Opposite the live projection of Procuress is a video entitled Social Otherwise. Smith weaves found footage of riots, starlings, fish shoaling, scenes of an interior with dancing, learning, writing cowboy-meets-biker women, and a mashup of two songs (“Light You Up” by Shawn Mullins and Debby Boone’s 1977 song “You Light Up My Life) with audio excerpts from the Sandra Bland recording.

Text in neon alternates between “I will light you up” and “I will light up your life.” The former was taken from widely circulated video of the late Sandra Bland in 2015. The 28-year-old African American woman was pulled over for failing to signal, ended up in jail, and three days later, died of apparent suicide. The case drew national attention with the spread of the officer’s dashcam footage in addition to Ms. Bland’s own cellphone video. It goes from what appears to be a routine traffic stop to a disturbing and aggressive confrontation wherein the officer points at her with a taser and threatens her “I will light you up.” The confrontation is made even more unsettling by Ms. Bland’s death only three days after being arrested.

The latter phrase is taken from the title of Debby Boone’s “You Light Up My Life.” Growing up the song and era reminded Smith of the epitome of a white American ideal. The song was covered eventually by Whitney Houston and Aretha Franklin, among others, and there is a marked shift that the song takes. Smith reclaims the hostile language from the Sandra Bland encounter and inverts the phrase to be more positive.

Nearby, perched on frames are objects and colorful renderings of geological formations set among pages from catalogues peddling the domestic habitat. Habitats are considered environments where one feels safe and protected, welcome, and able to let down one’s guard.

Much like the other work on view here, the drawings inquire into ideas of home, safety, and vulnerability. Smith brings to our attention that the safety of home and our own private and personal spaces is most definitely not a universal experience when one considers Sandra Bland, Botham Jean, and Atatiana Jefferson, among numerous others. One’s existence is entirely subject to chance and subject to overarching, and everchanging, influences due to no fault of one’s own. 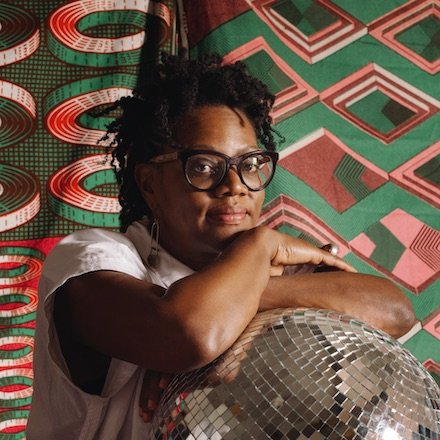 Cauleen Smith is an interdisciplinary artist whose work reflects upon the everyday possibilities of the imagination. Operating in multiple materials and arenas, Smith roots her work firmly within the discourse of mid-twentieth-century experimental film. Drawing from structuralism, Third World Cinema, and science fiction, she makes things that deploy the tactics of activism in service of ecstatic social space and contemplation. Smith enjoys container gardening, likes cats and collects disco balls, vinyl records, and books. She is an avid leisure and functional cyclist. She lives in Los Angeles and is Art Program faculty at California Institute of the Arts. She received a BA in Creative Arts from San Francisco State University and her MFA from the University of California, Los Angeles School of Theater Film and Television. Smith’s short films, feature film, and installation and performance were showcased at International Film Festival Rotterdam 2019. Smith is the recipient of the following awards: Rockefeller Media Arts Award, Creative Capital Film/Video, Independent Spirit Someone to Watch Award, Chicago 3Arts Grant, and the Foundation for Contemporary Arts, Chicago Expo Artadia Award, a Rauschenberg Residency, Herb Alpert Awards in the Arts in Film and Video 2016, United States Artists Award 2017, and was the 2016 inaugural recipient of the Ellsworth Kelly Award.
Photo credit: Dustin Aksland 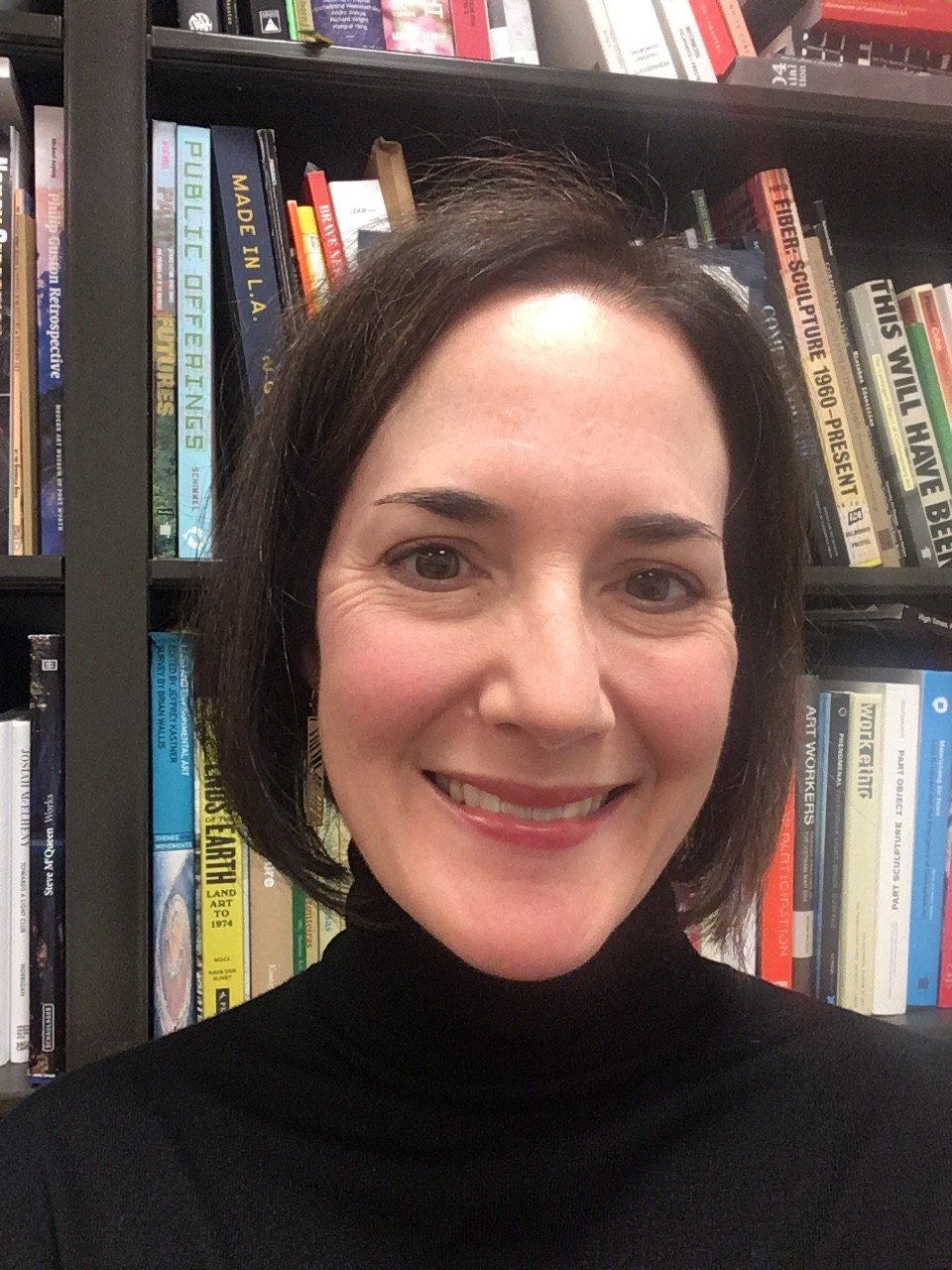 Kelly Baum is the Cynthia Hazen Polsky and Leon Polsky Curator of Contemporary Art at the Metropolitan Museum of Art. She has held curatorial positions at the Princeton University Art Museum (2007–2015), the Blanton Museum of Art (2002–2007), and the Museum of Fine Arts, Houston (2000–2002). Kelly has curated or co-curated over twenty-five exhibitions, including Carol Bove (2006); Nobody’s Property: Art, Land, Space (2010); New Jersey as Non-Site (2013), for which she received a Warhol Curatorial Research Fellowship; The Body Politic: Video from The Met Collection (2017); Delirious: Art at the Limits of Reason, 1950–1980 (2017), and most recentlyOdyssey: Jack Whitten Sculpture, 1963-2017. Her writing has been widely published in books and catalogues as well as in such journals as October and Art Journal. In 2018, she was a fellow in the Center for Curatorial Leadership. 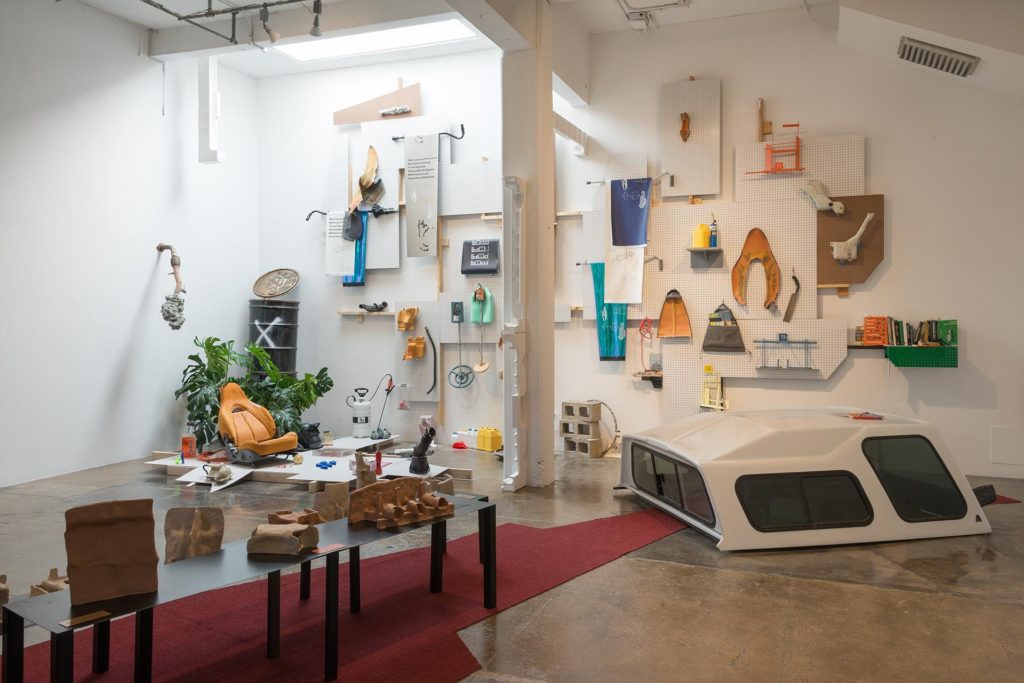 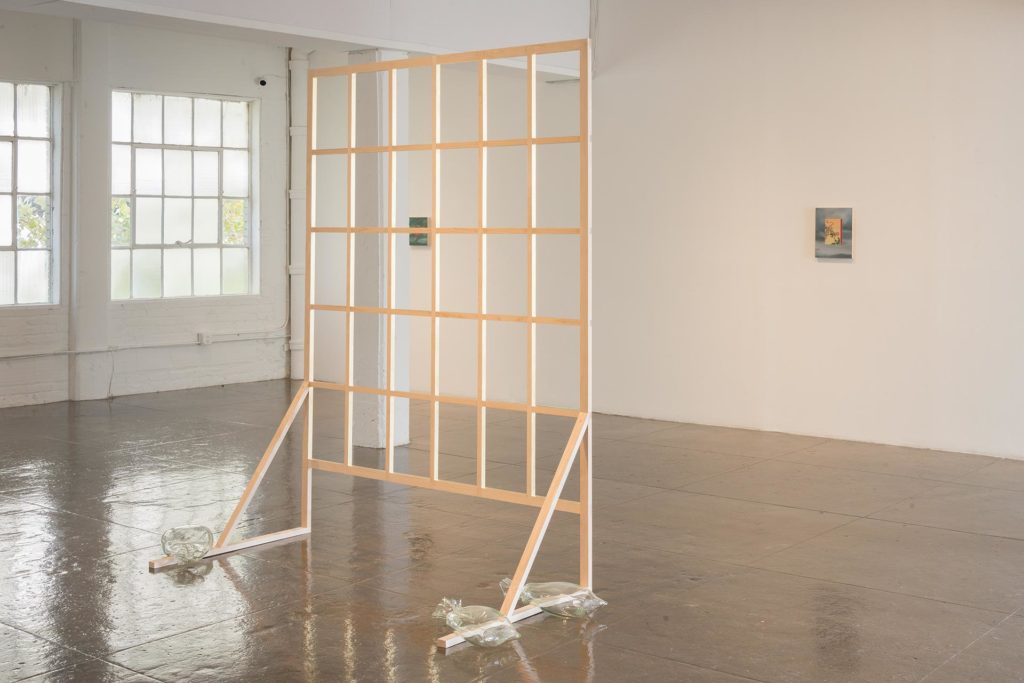