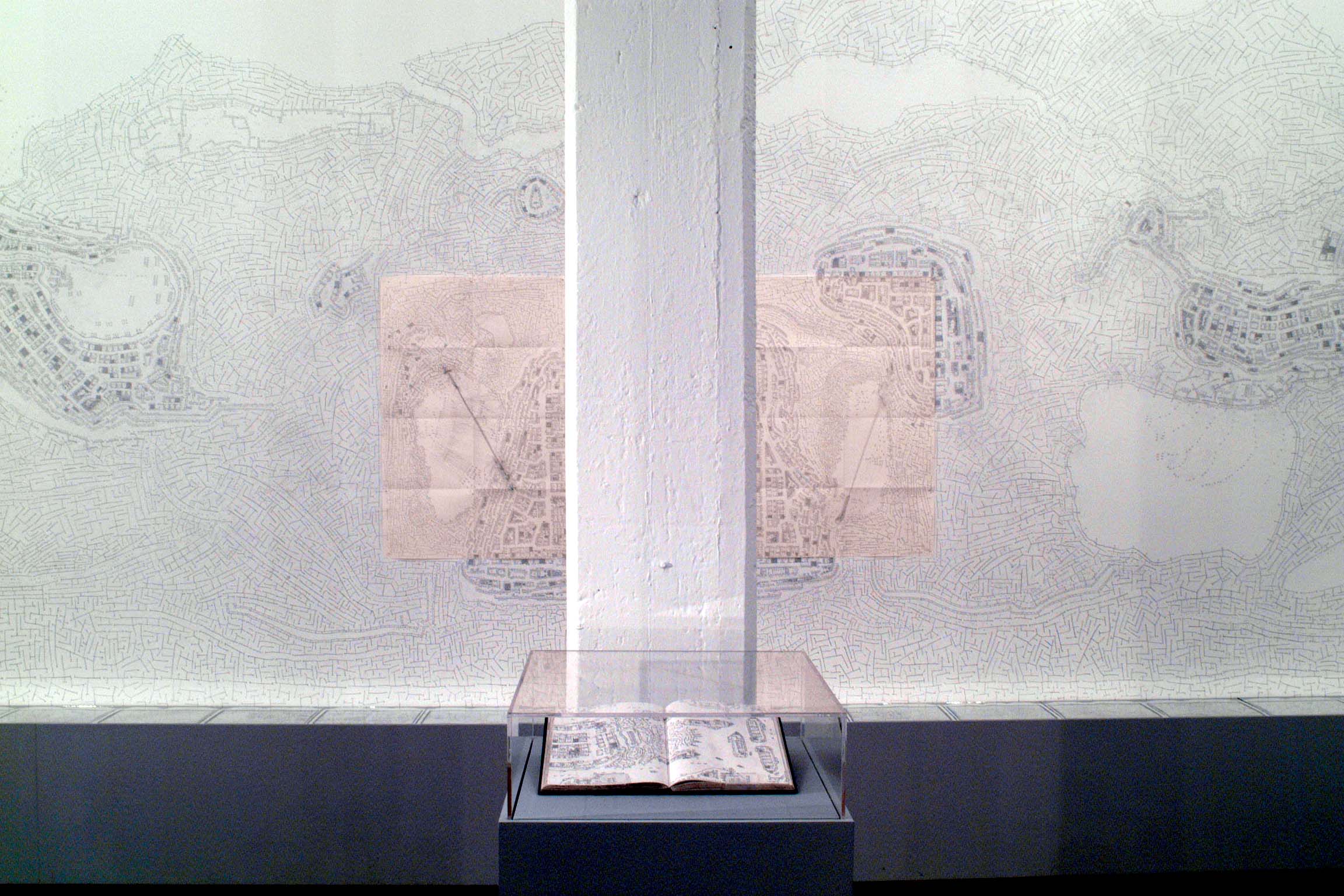 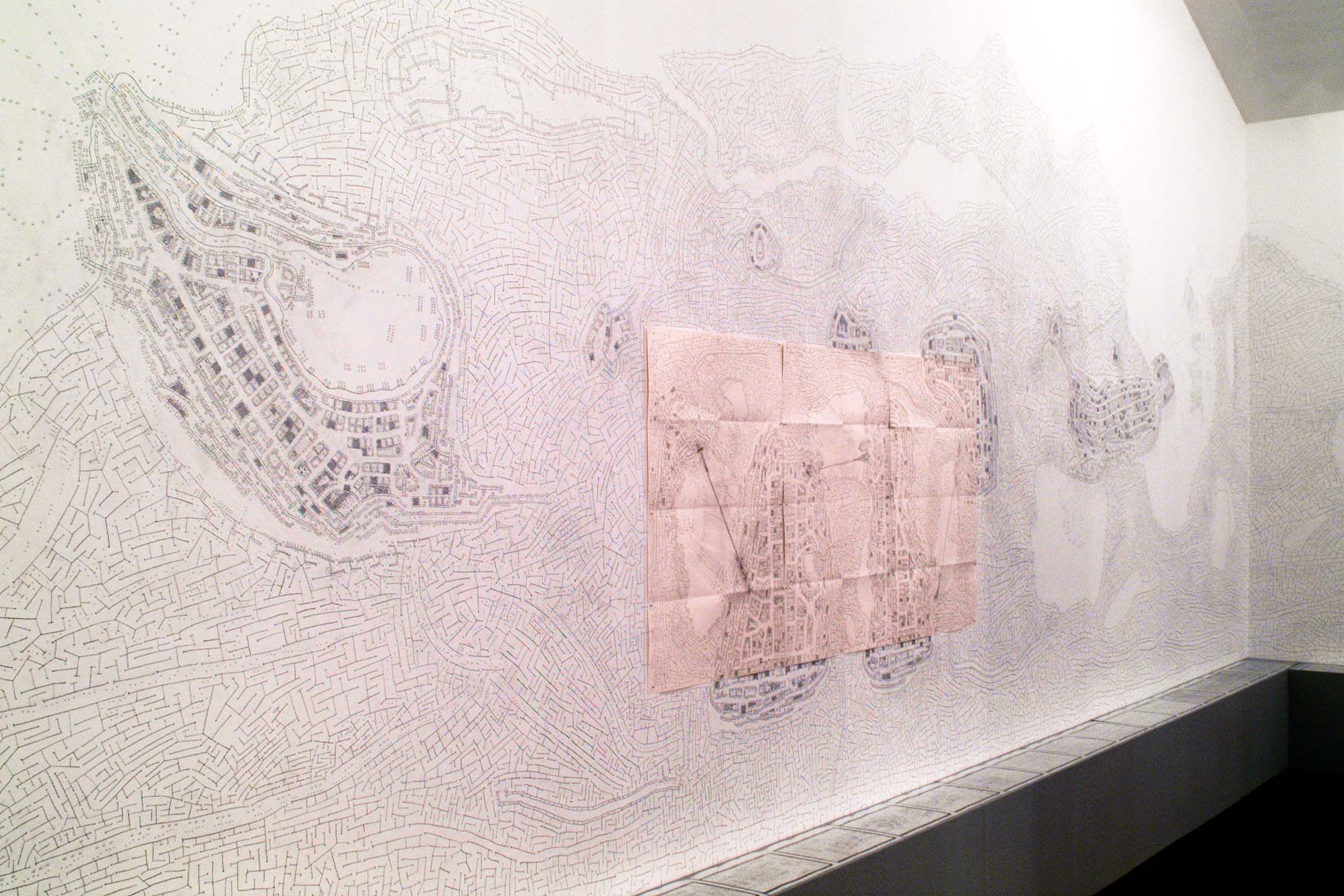 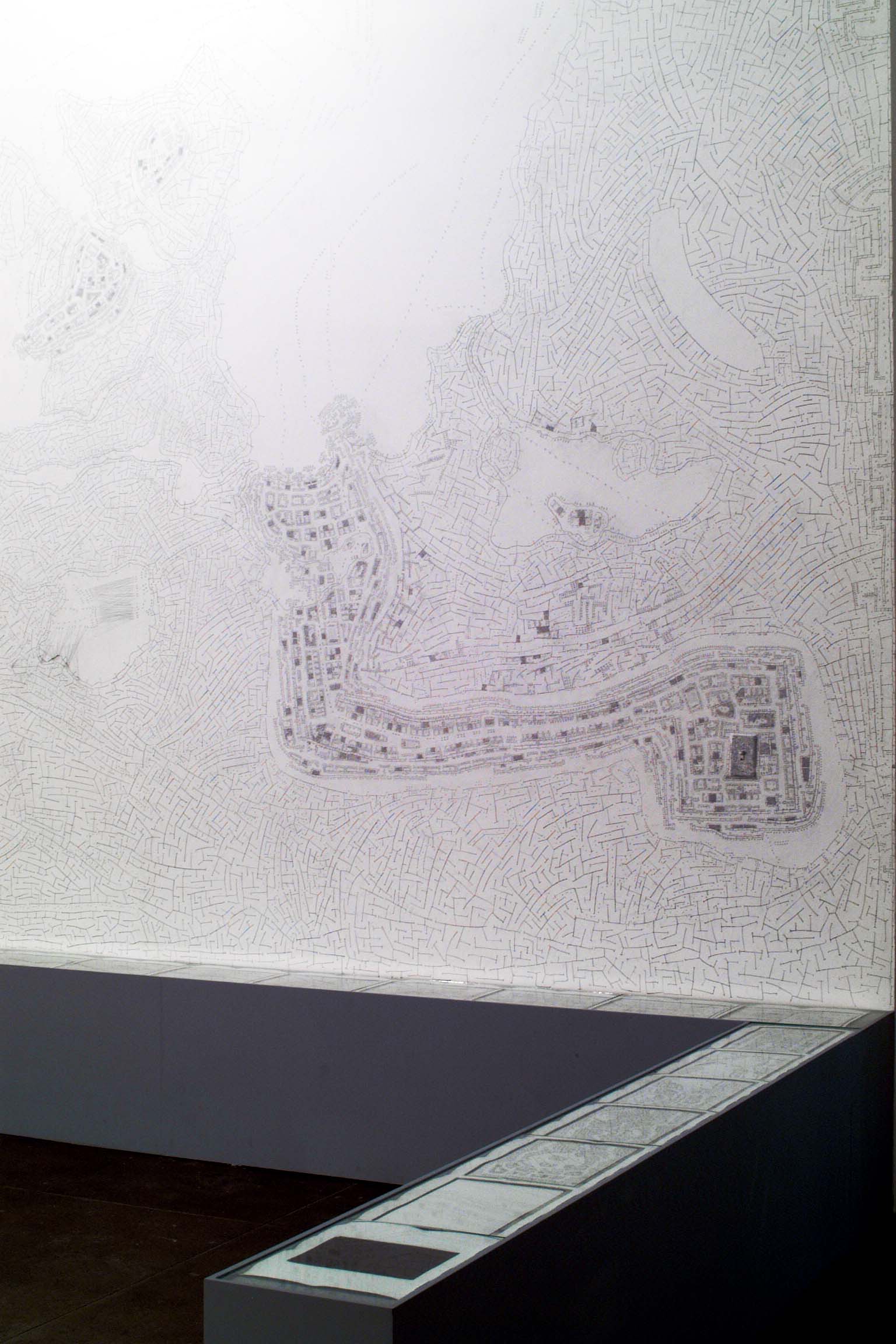 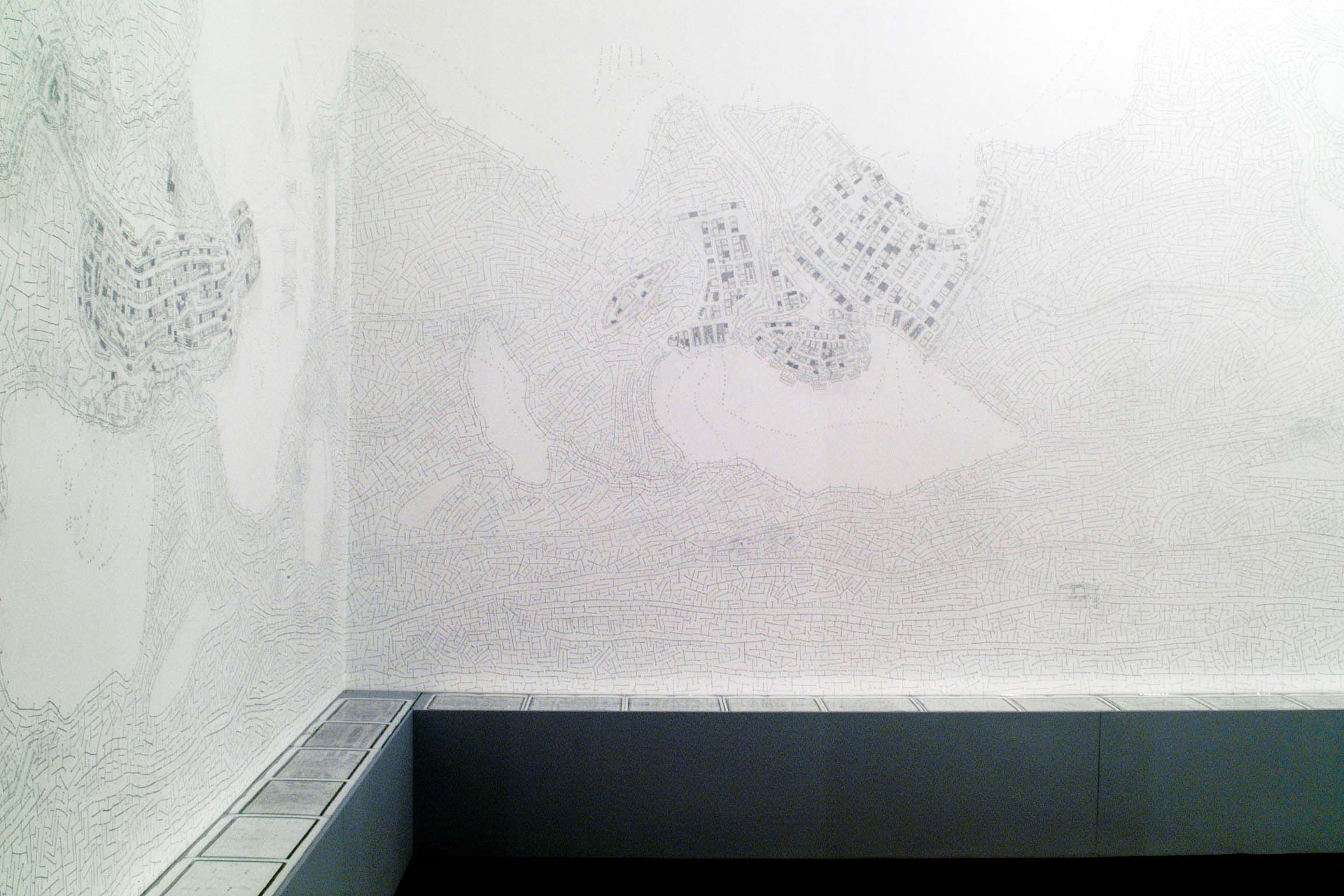 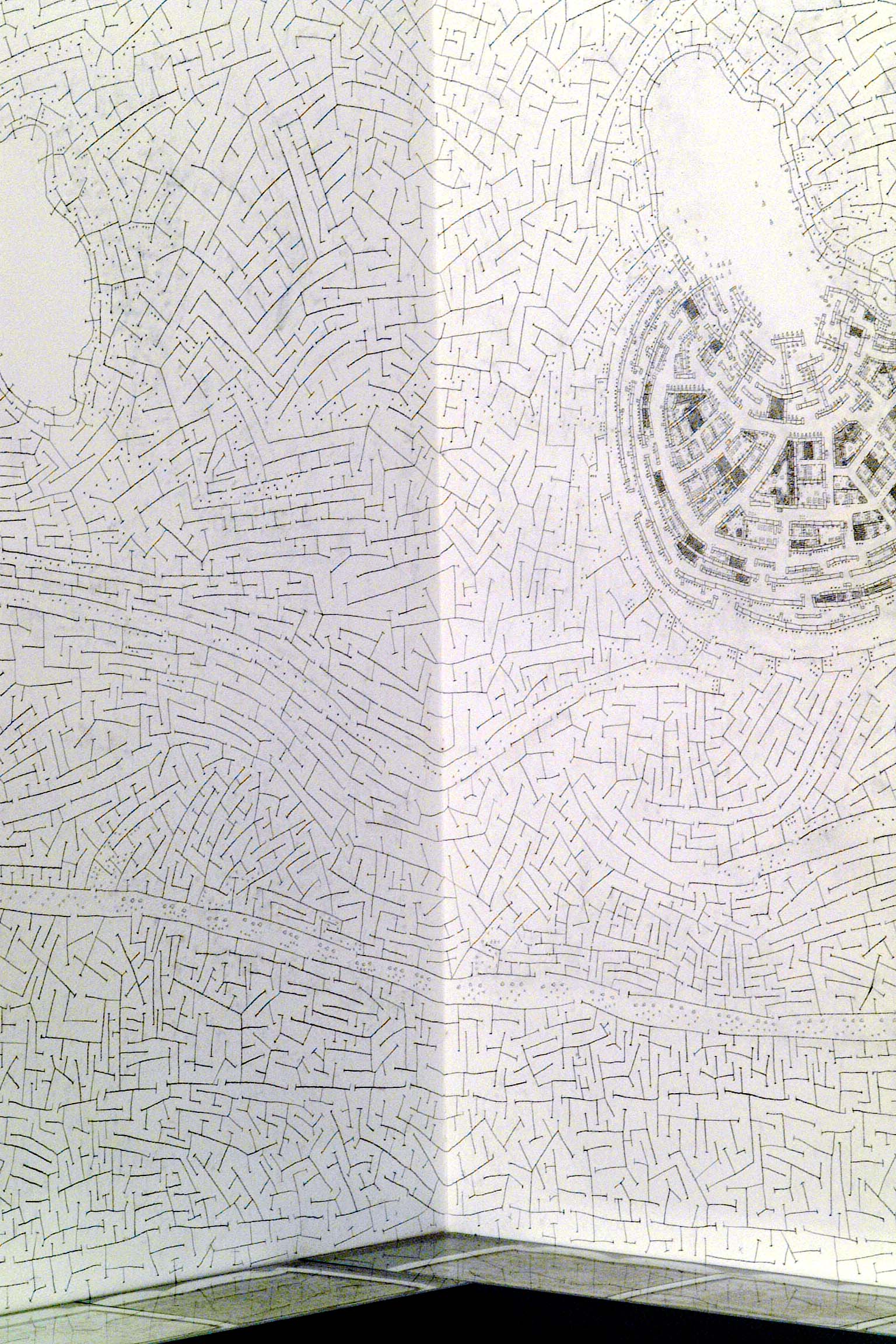 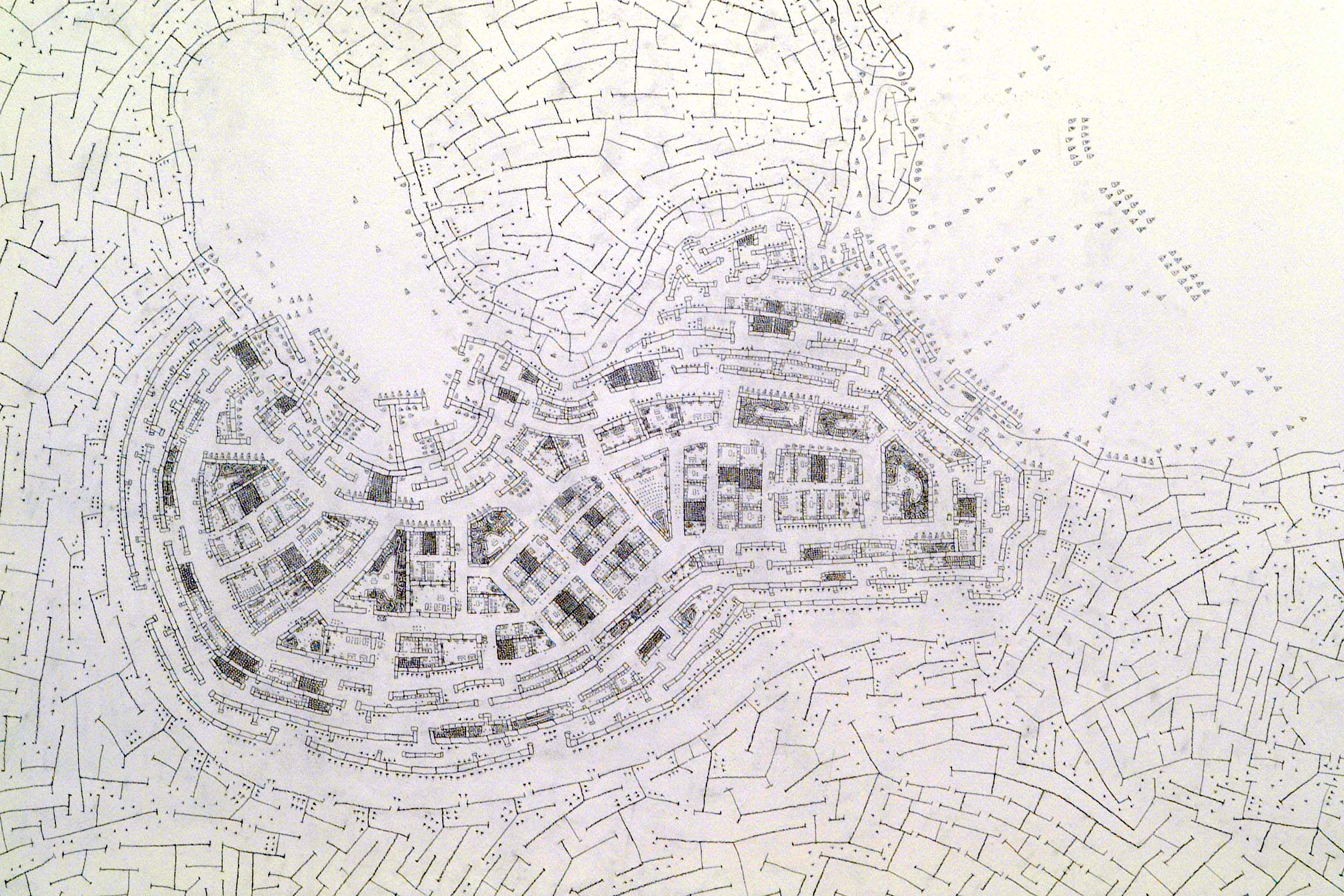 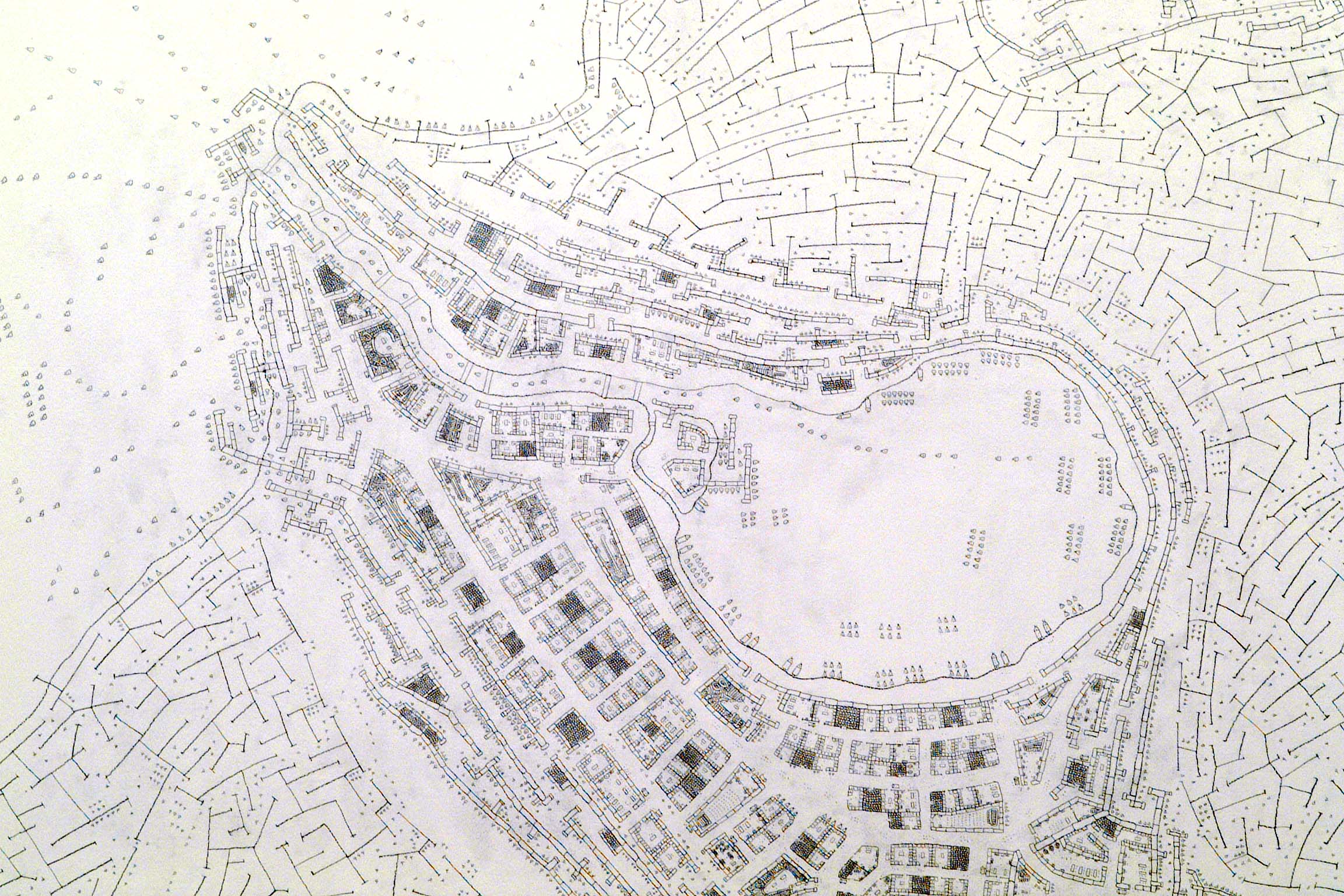 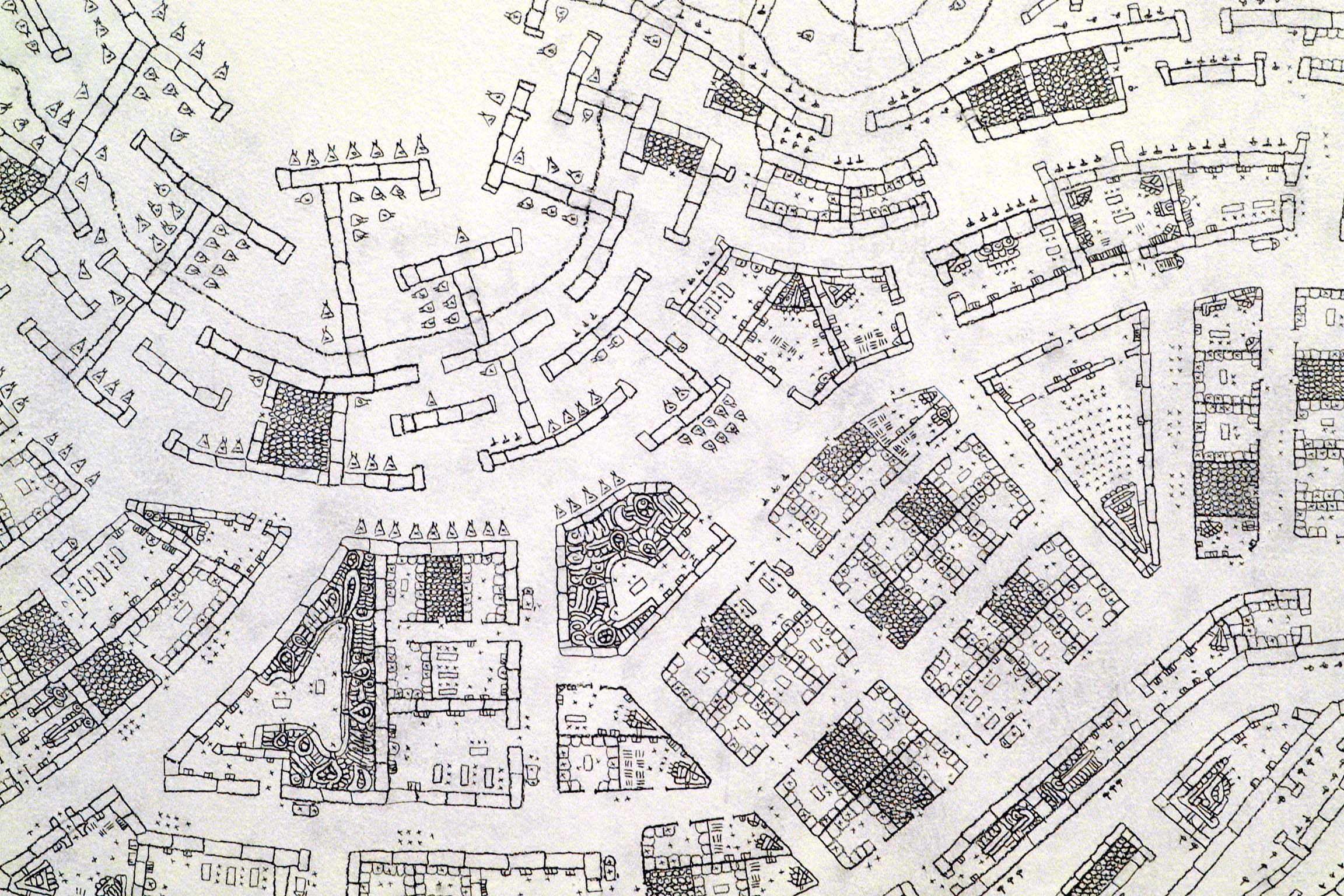 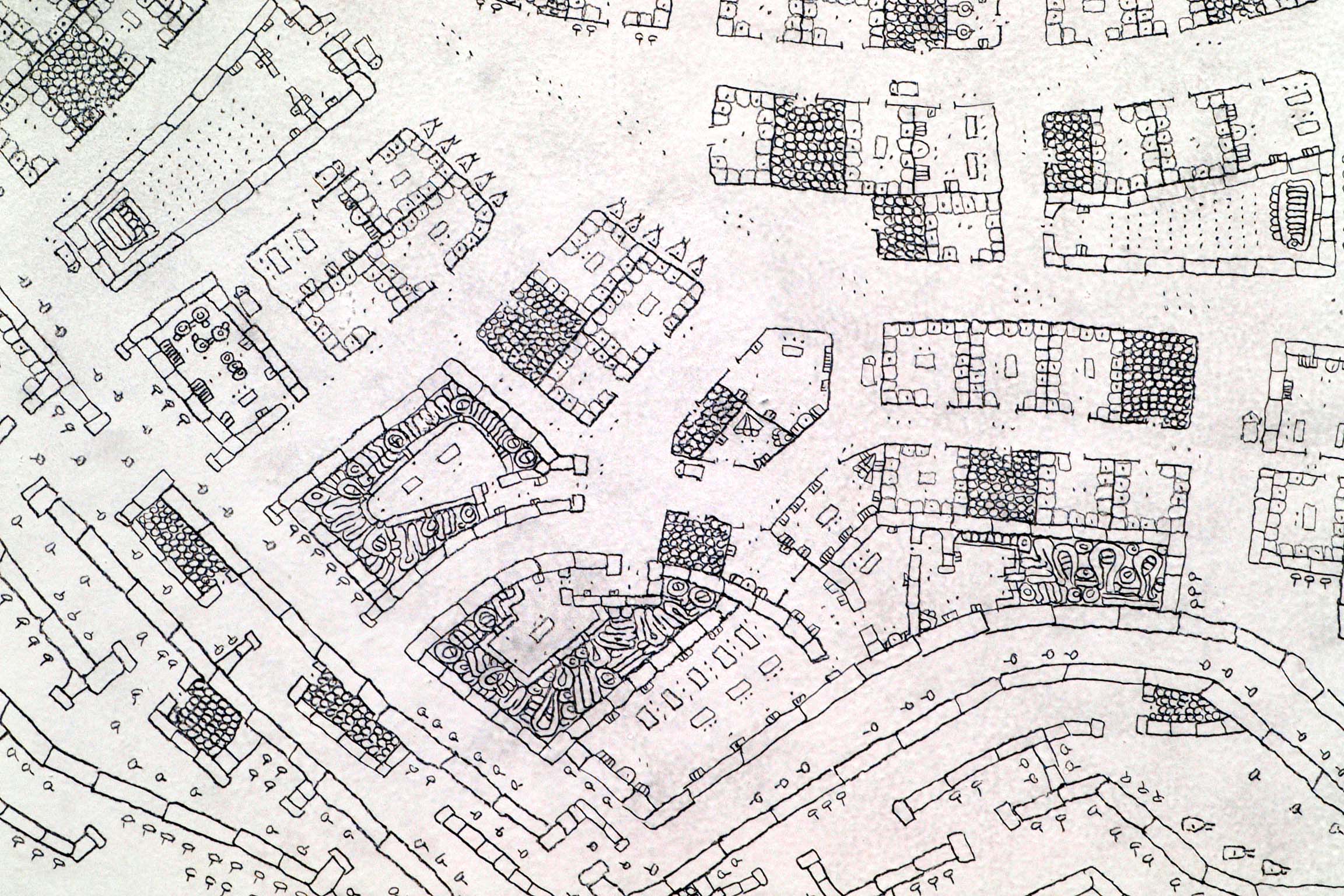 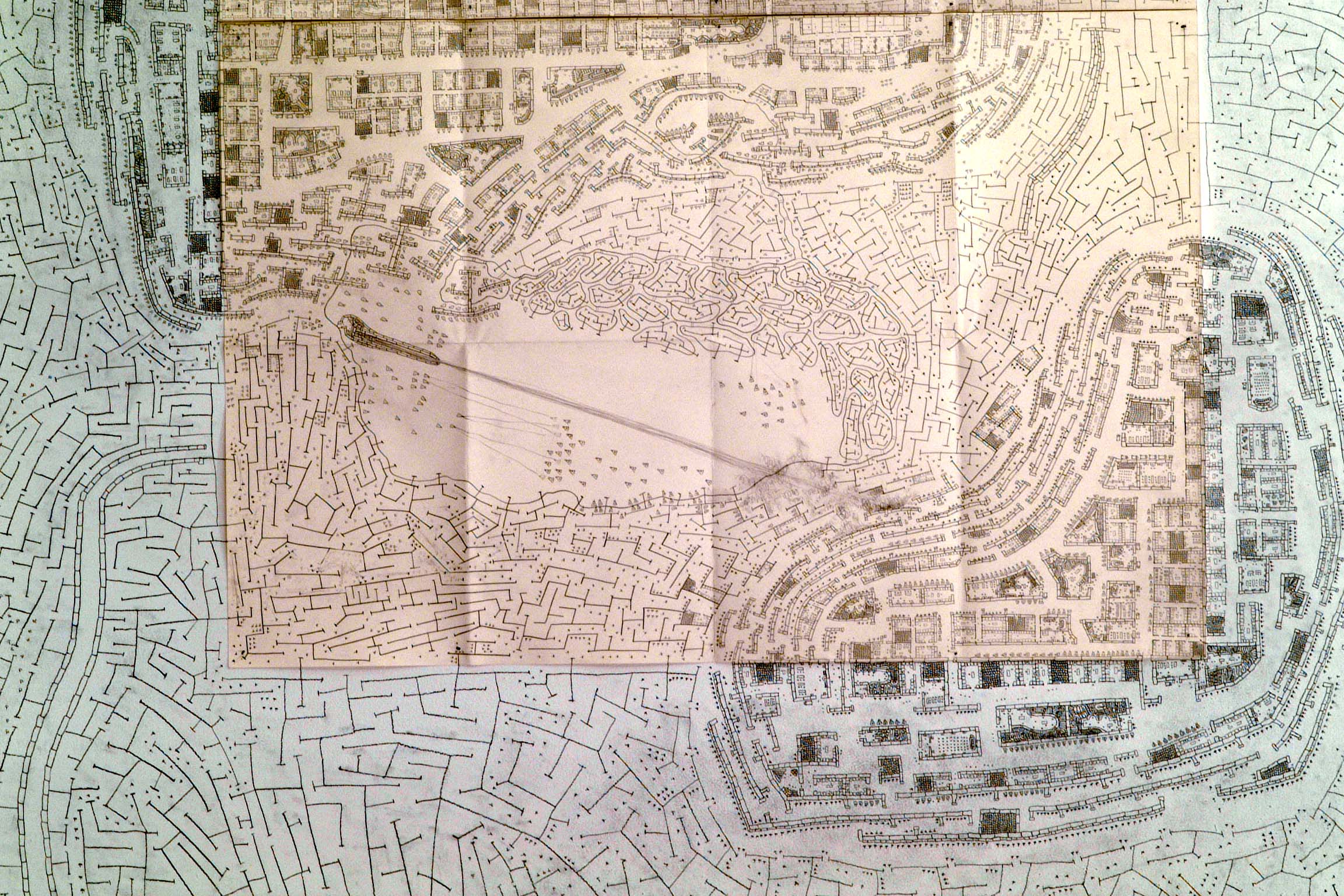 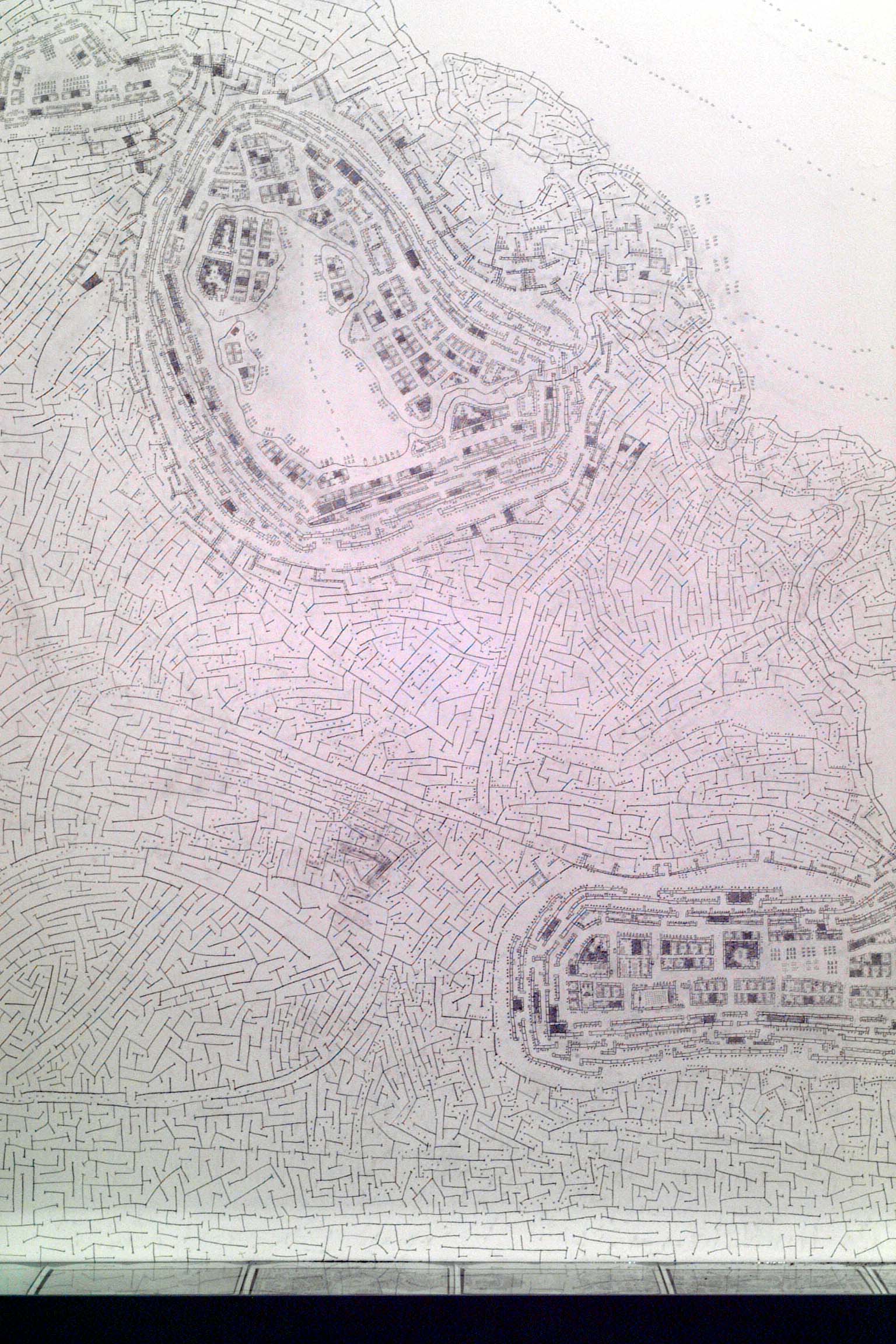 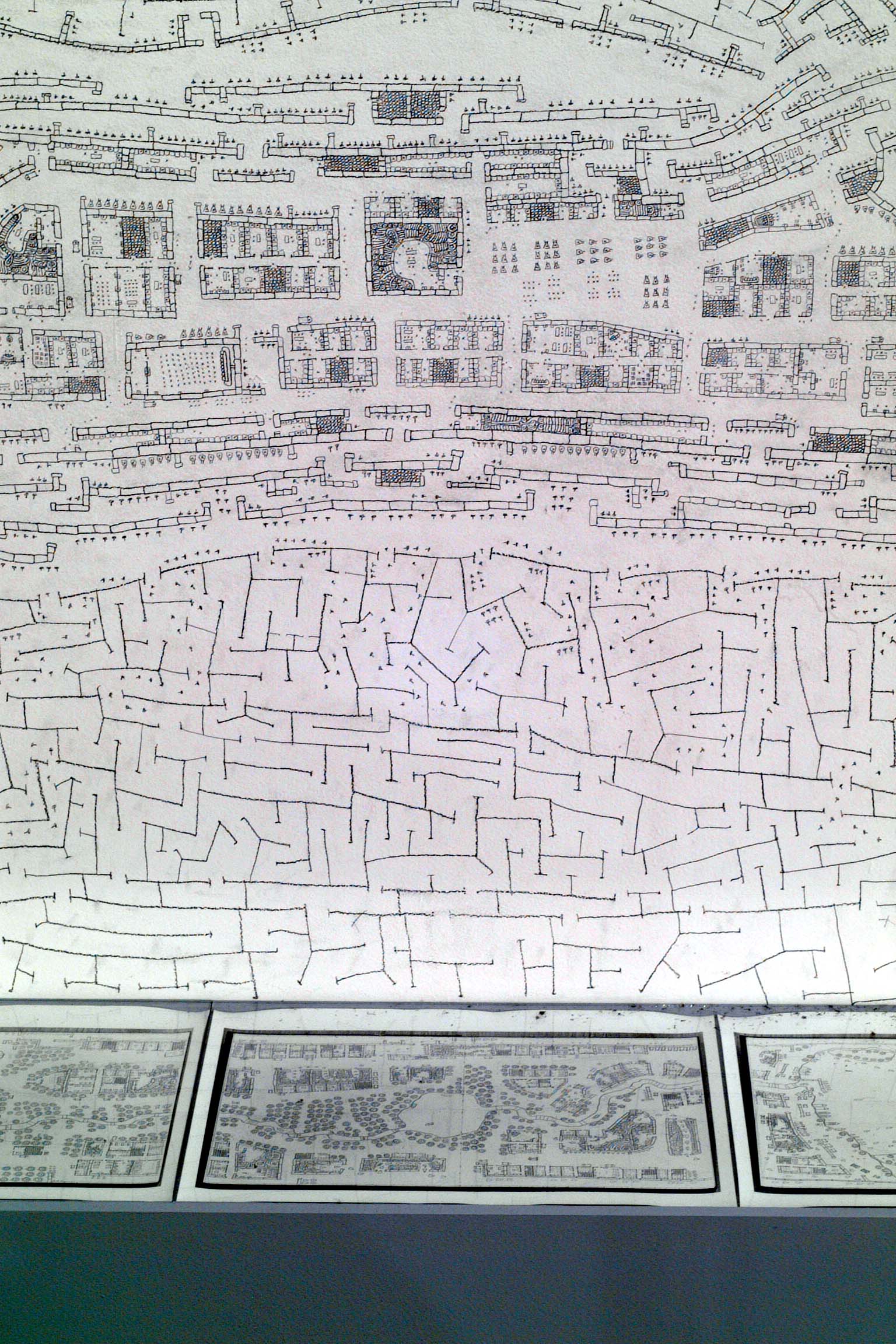 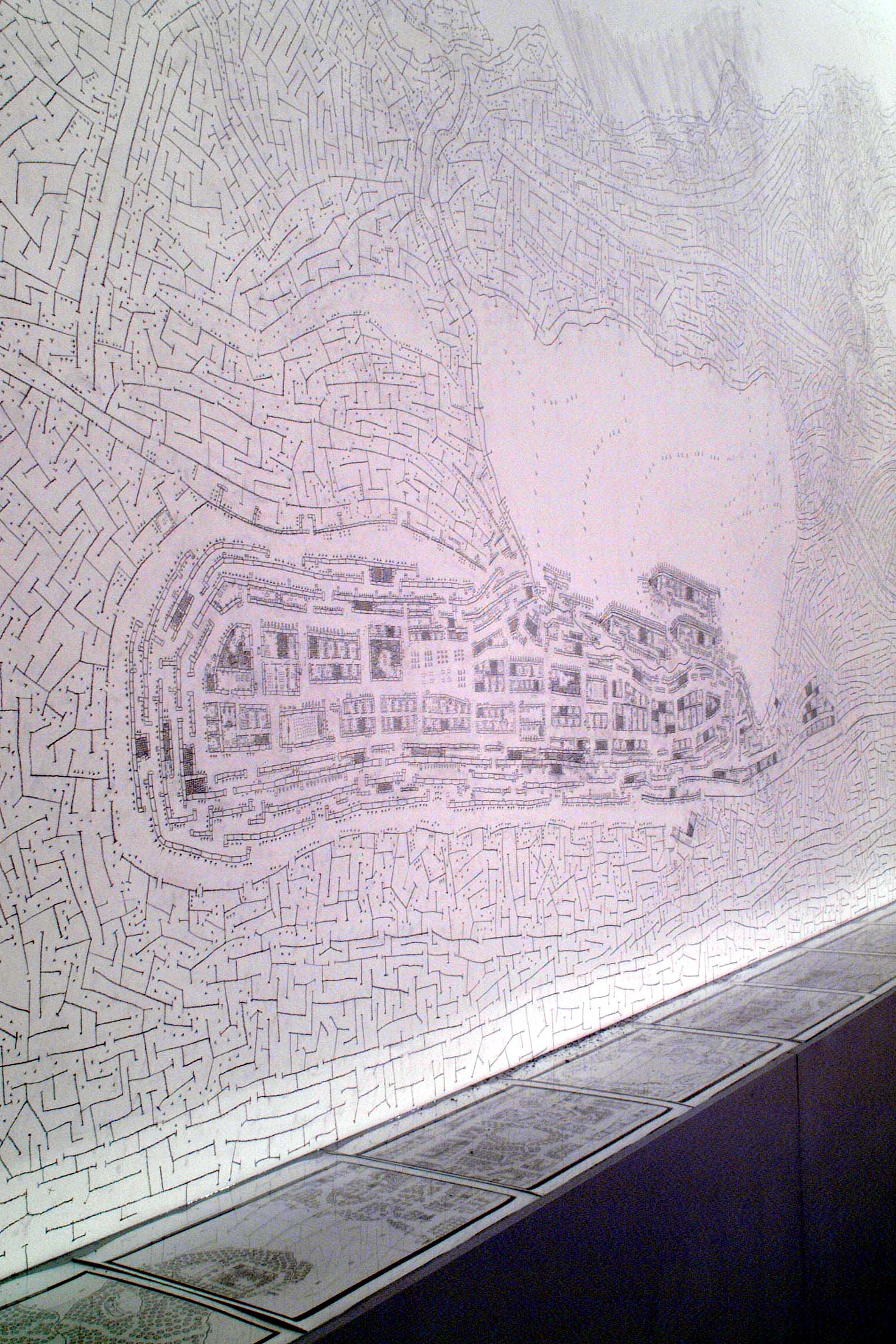 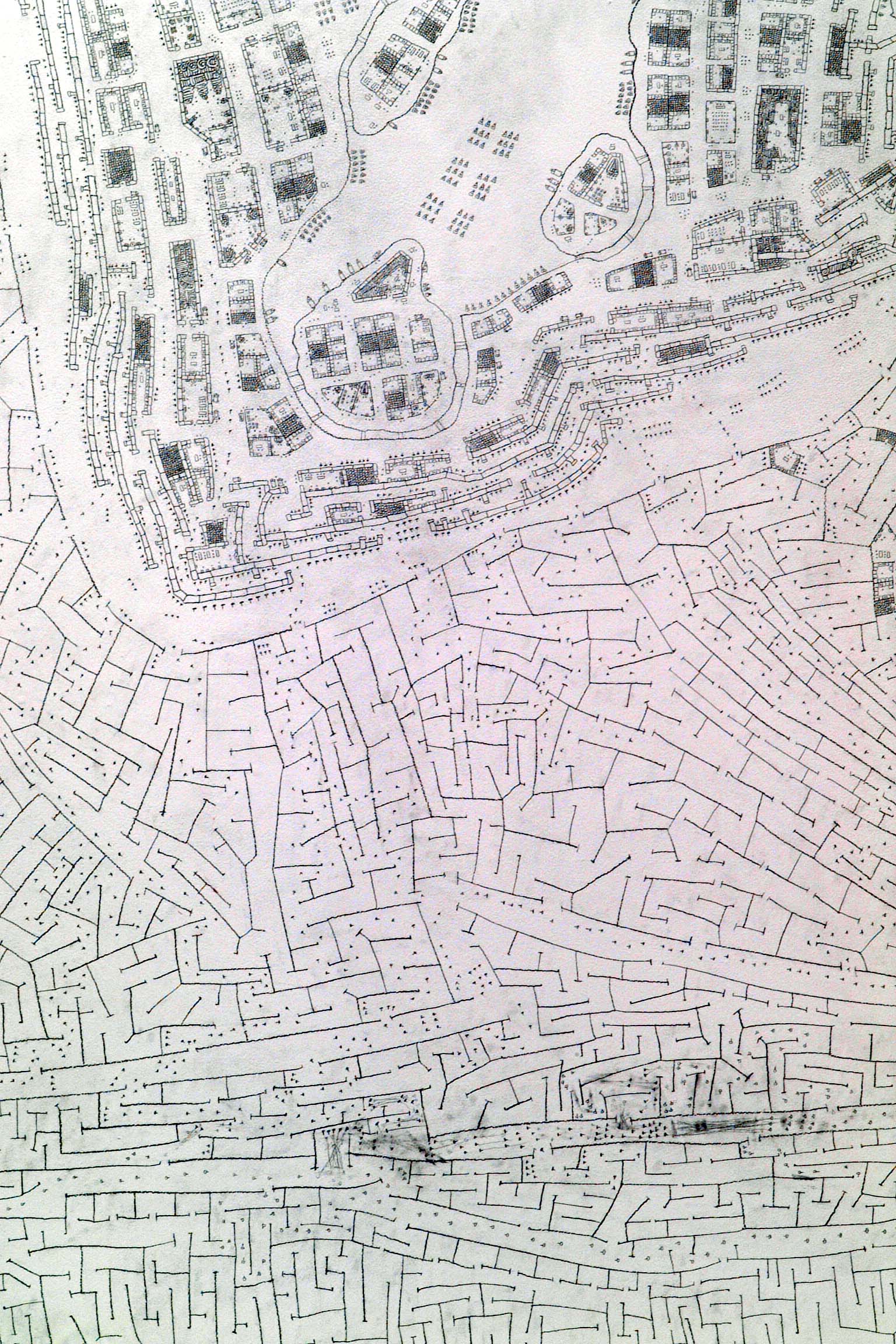 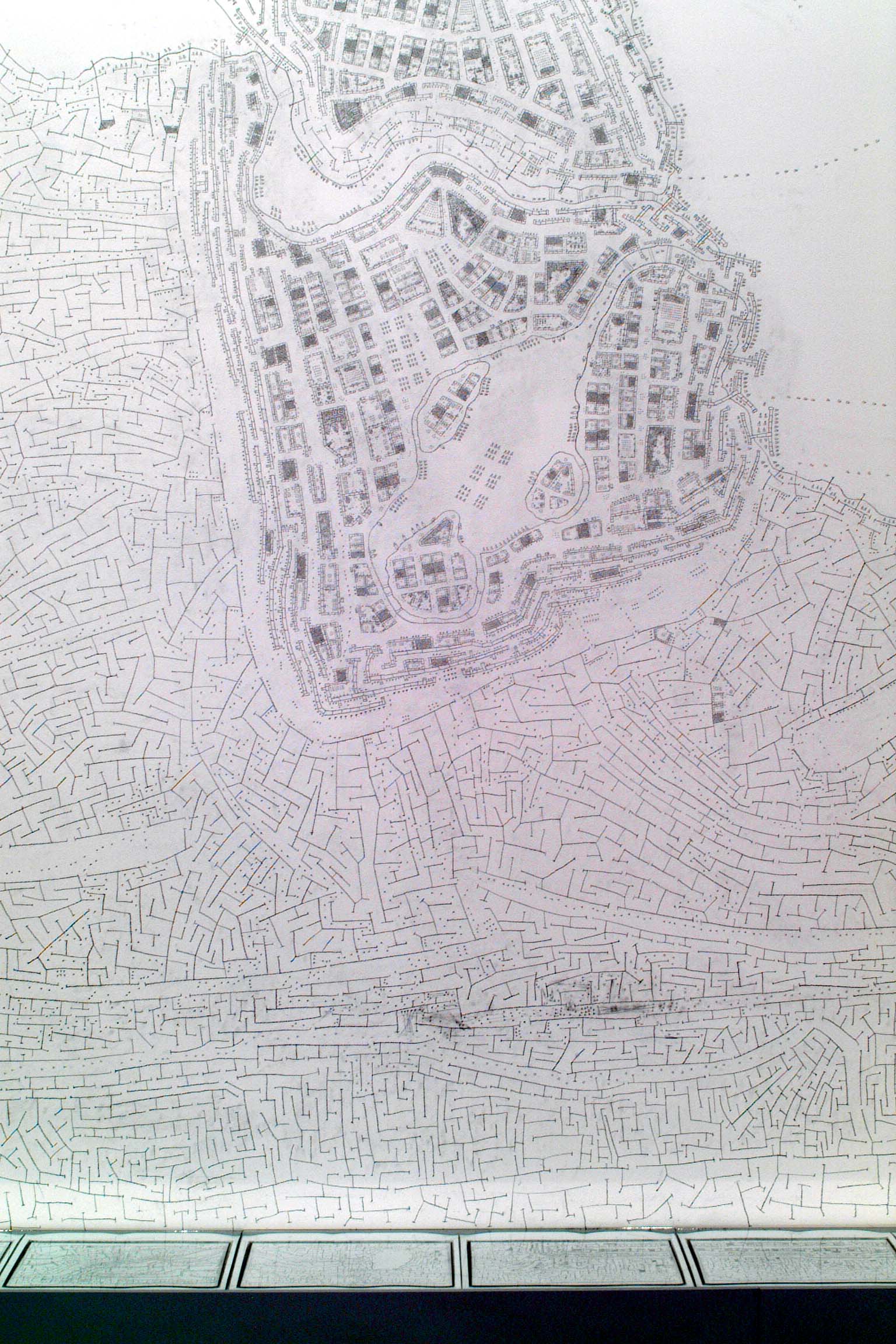 At Artpace Kim Jones has filled the gallery with Flatland Wars, the latest in his ongoing series of War Drawings. Working directly on the wall, Jones uses pencil to map a labyrinth of oceans, cities, ramparts, and cannons—a two-dimensional world inhabited by constantly warring populations. Influenced by Flatland, a science fiction novel written by Edwin A. Abbott in 1884, the War Drawings are video game-like in their visual simplicity and intricate set of rules. Based on a childhood pastime of the artist, these are his pictorial descriptions of an imaginary land where x’s and dots are in constant battle over territory.

As with many of his War Drawings, Flatland Wars began with a drawing on paper, in this case one five years old. Jones works indefinitely on these sheets, using graphite and eraser to allow for the sense of progress, while evidence of the erased marks indicates the past. Cities are built and knocked down. Troops move across the page in formation. Battalions are killed and reinforcements sent in.

Although Flatland Wars started with a single piece of paper, it has since strayed far beyond its borders. The massive drawing has filled three gallery walls, covering almost 1,600 square feet. This is Jones’s largest War Drawing to date. But it is not alone in the gallery. Accompanying it is another in the series played out on the pages of Jones’s black sketchbook. The book is on display in a vitrine, while the individual pages, reproduced in photographs, are presented in sequence around the periphery of the room.

Surrounded by the sprawling maze of Flatland Wars, the quantity of drawn marks and represented activity is astounding. While in other works Jones creates barriers with masses of tangled matter, this piece is diagrammatic and legible, yet nonetheless overwhelming in its breadth. The irony is that, for all of its logic, Flatland Wars leads only to conflict. 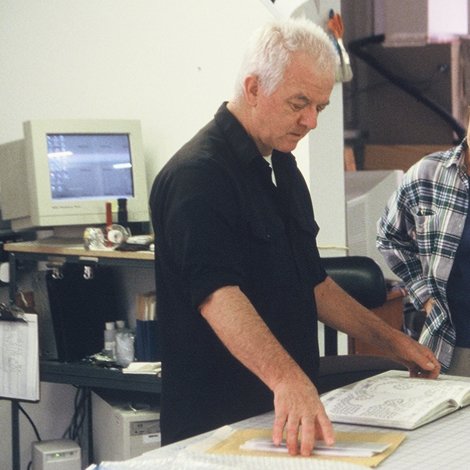 Kim Jones is best known for his visceral, at times disturbing, performances as Mudman. In this ongoing series begun in the 1970s, he covers his naked body with mud and sticks, transforming himself into a walking sculpture. With a nod to Joseph Beuys, Jones brings this cryptic concoction of myth, organic material, and interactivity to the public—not only to art-goers but also to those he encounters while roaming the streets.
Jones’s object-based works are no less startling and evocative. Many similarly involve mutation and a messy-ing of the everyday. An early example is Calender (1975). Jones used felt-tip markers to transfer Mudman’s three-dimensional exoskeleton onto the pages of a pin-up calendar. Intricate webs of barbed sticks mar the clean, voluptuous bodies of the nude women, ultimately hiding them from view.
A similarly thorny tangle makes its way into Jones’s installations. In A Cripple in the Right Way May Beat a Racer in the Wrong One (1999), child-sized cars adorn the walls, but are rendered unusable by the wood, foam, tape, cord, and toy dolls that encase them. The jumble operates in much the same way as the sticks do in other works—it creates a nearly unbreachable, yet altogether intriguing, barrier between the art piece and the viewer.
Kim Jones was born in California in 1944. After returning from the Vietnam War, he earned a BFA from California Institute of Arts (1971) and an MFA from Otis Art Institute (1973), both in Los Angeles, CA. He has had solo exhibitions at The Sirius Art Centre, Cork, Ireland (2003); Pierogi Gallery, Brooklyn, NY (2002); and John Weber Gallery, New York, NY (1999). Jones has been included in group exhibitions at Nassauischer Kunstverein, Wiesbaden, Germany (2001); Apex Art, New York, NY (1999); Museum of Contemporary Art, Los Angeles, CA (1998); and the Museum of Modern Art, New York, NY (1995, 1994). Kim Jones lives and works in New York, NY. 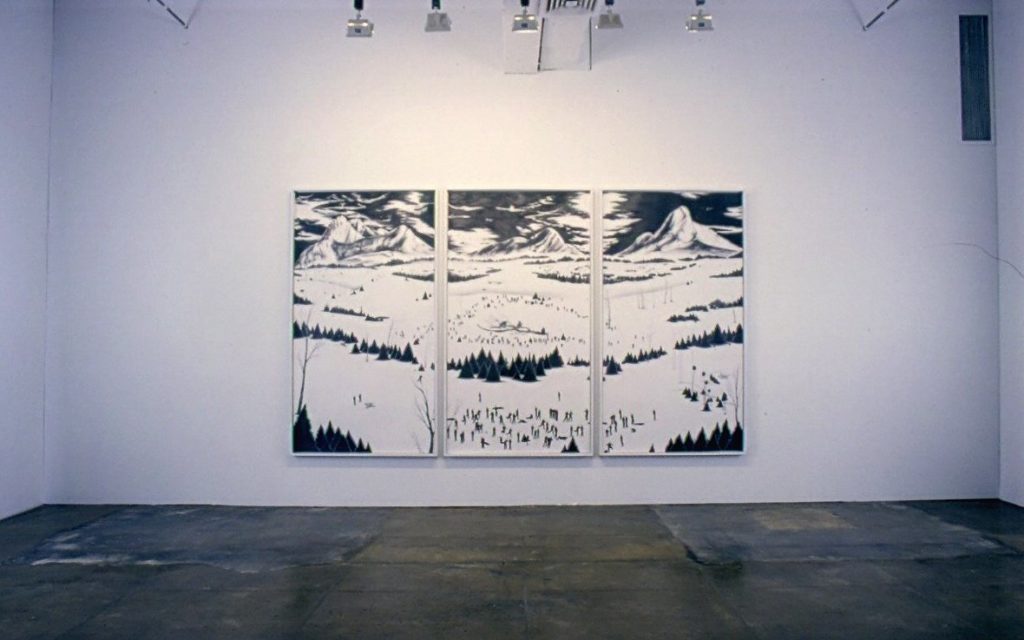 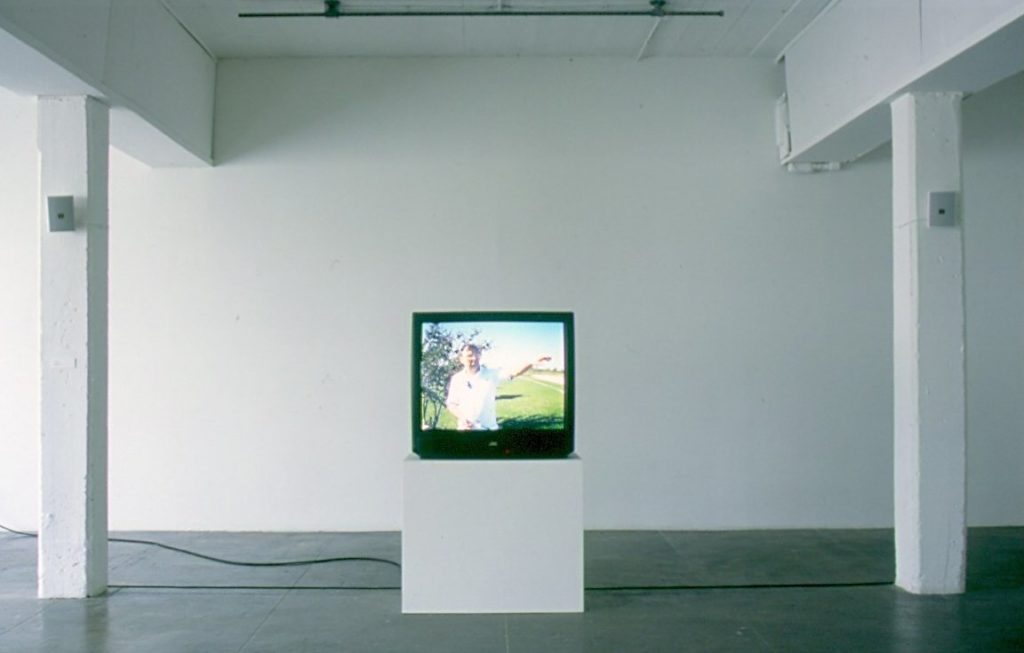