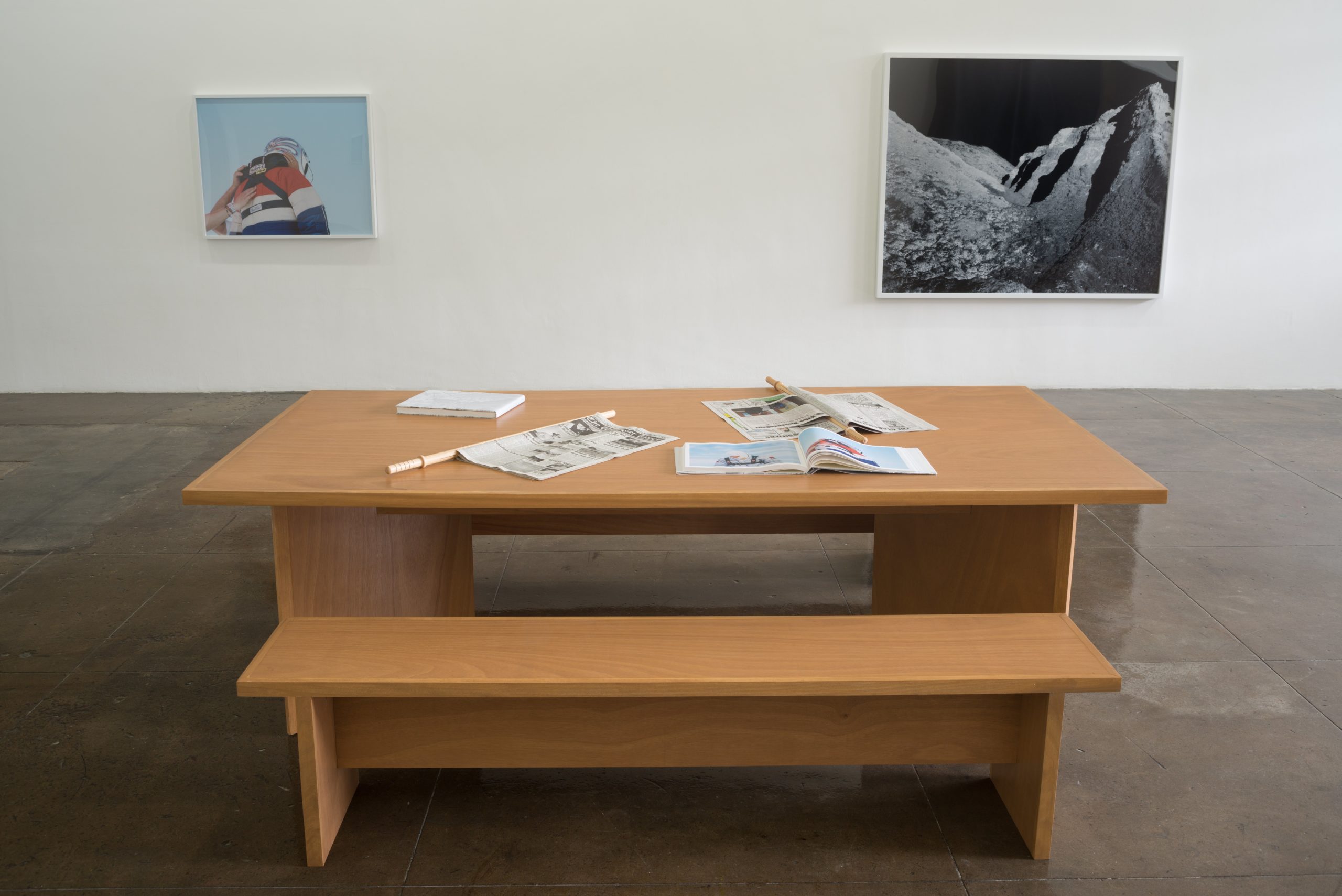 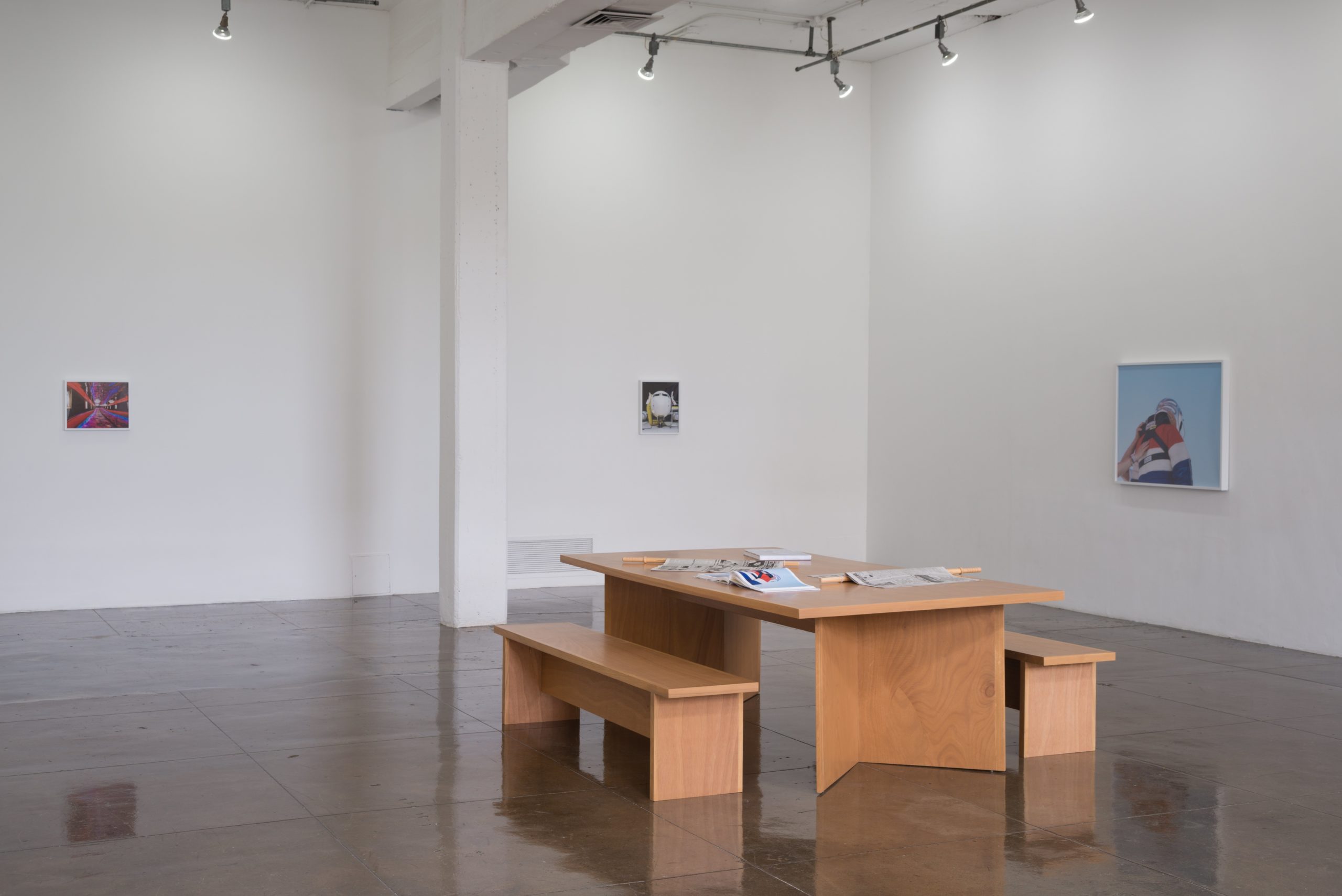 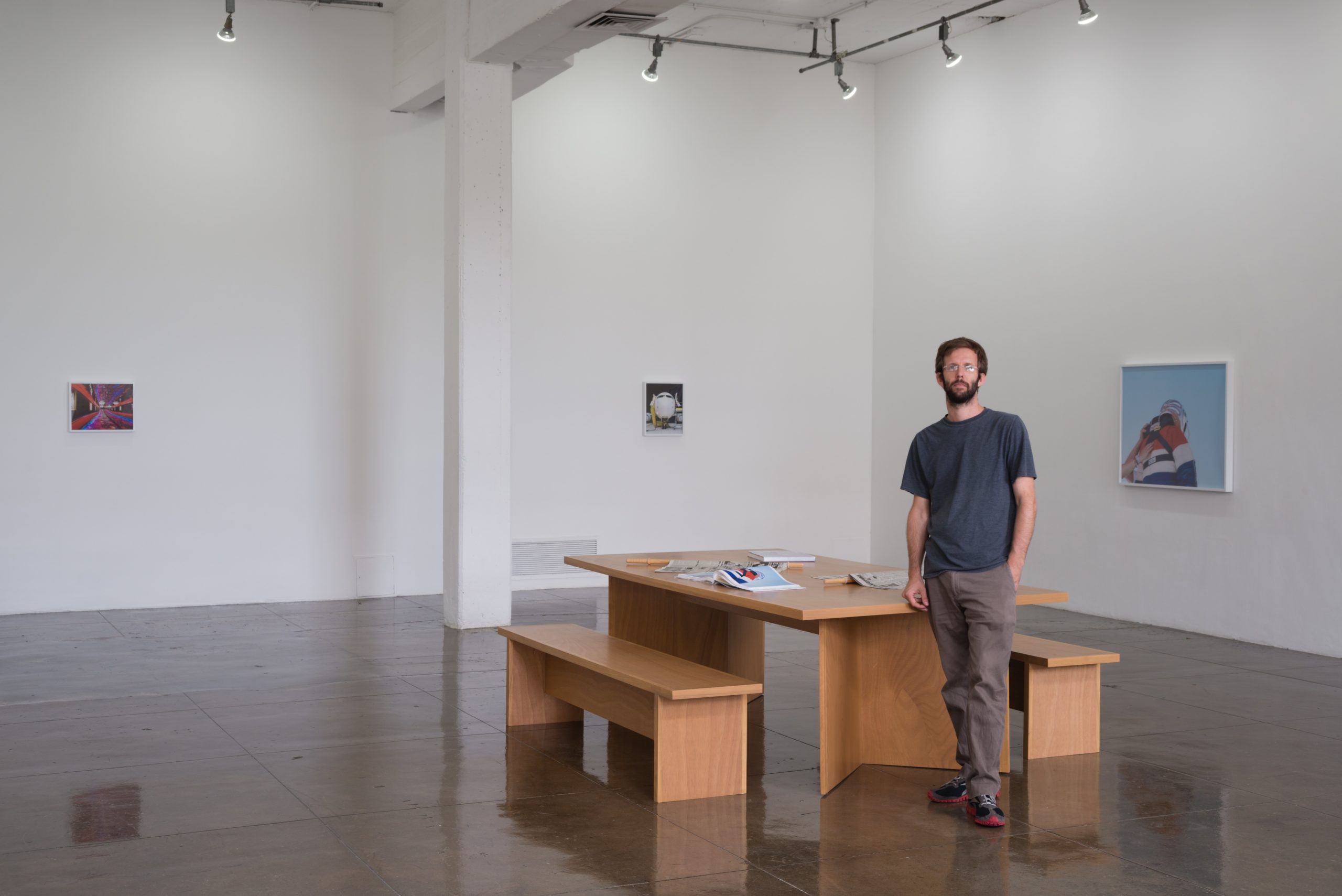 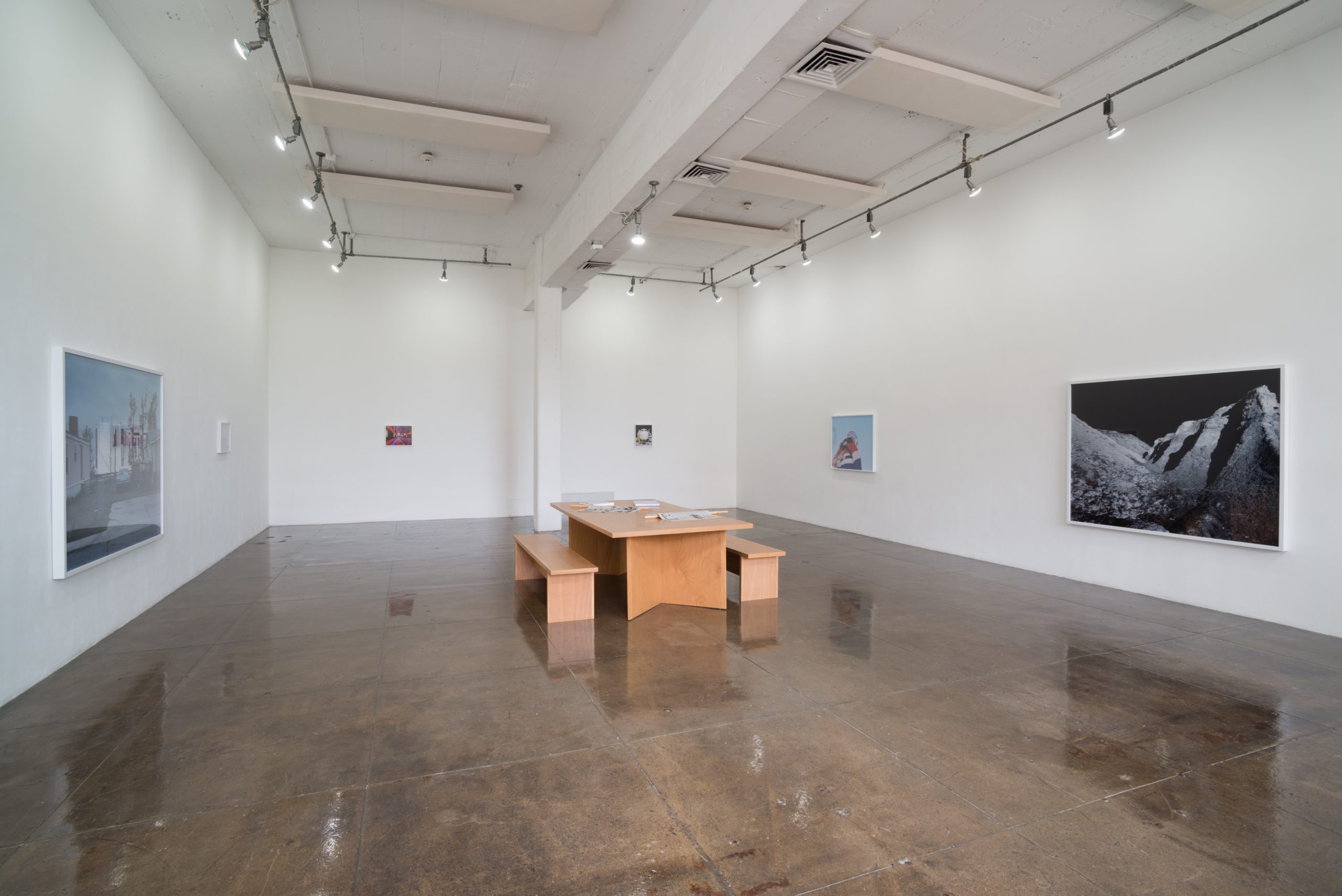 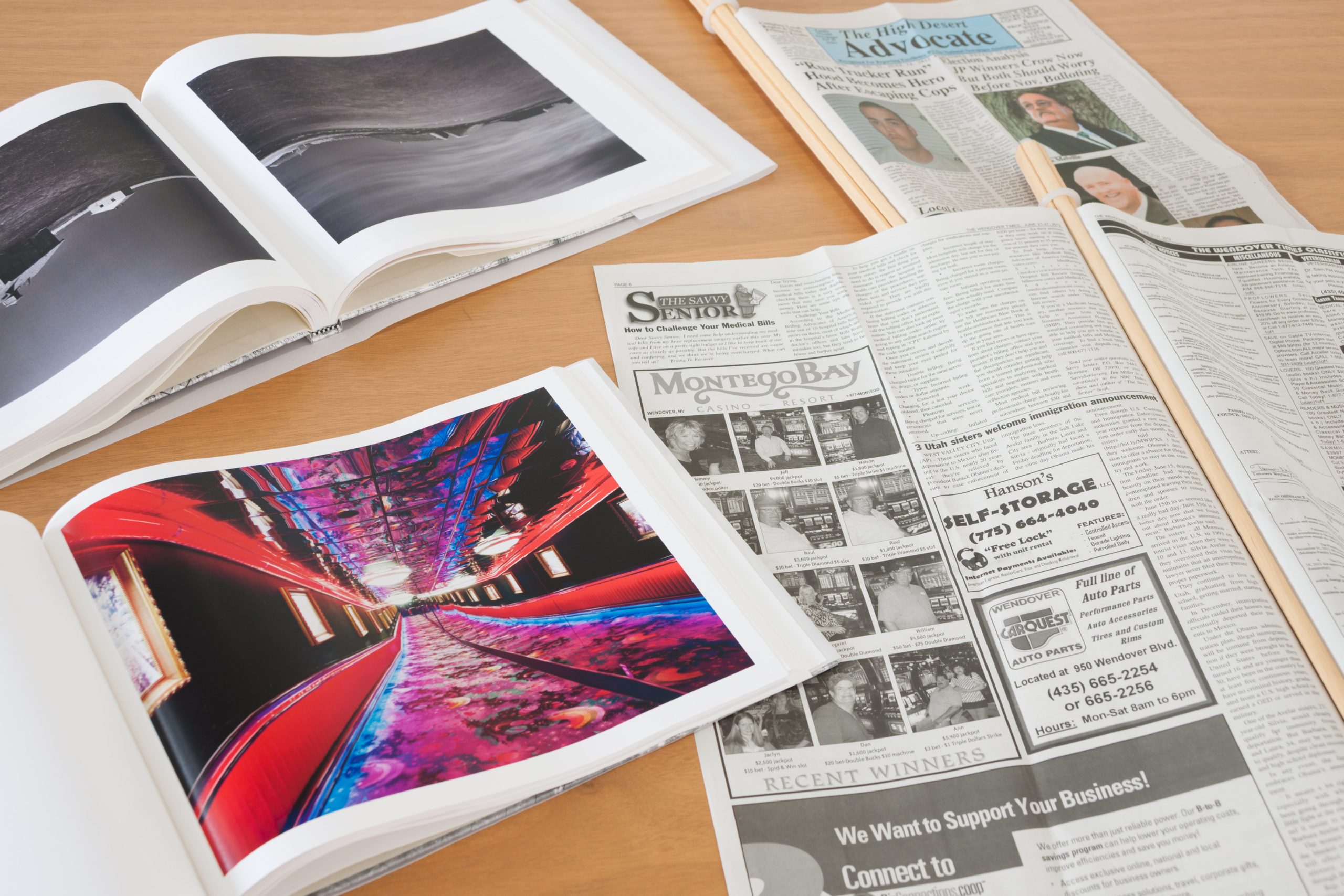 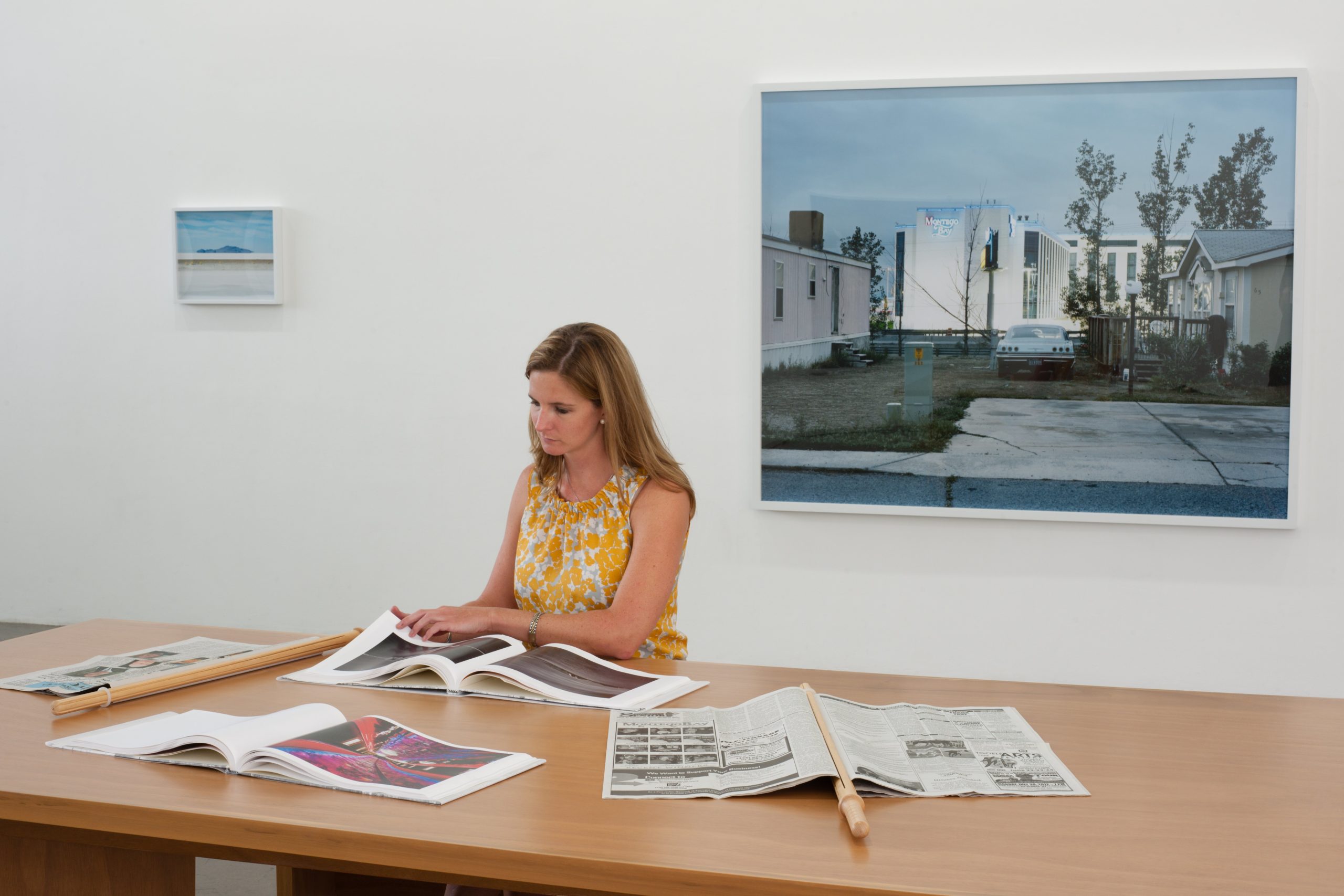 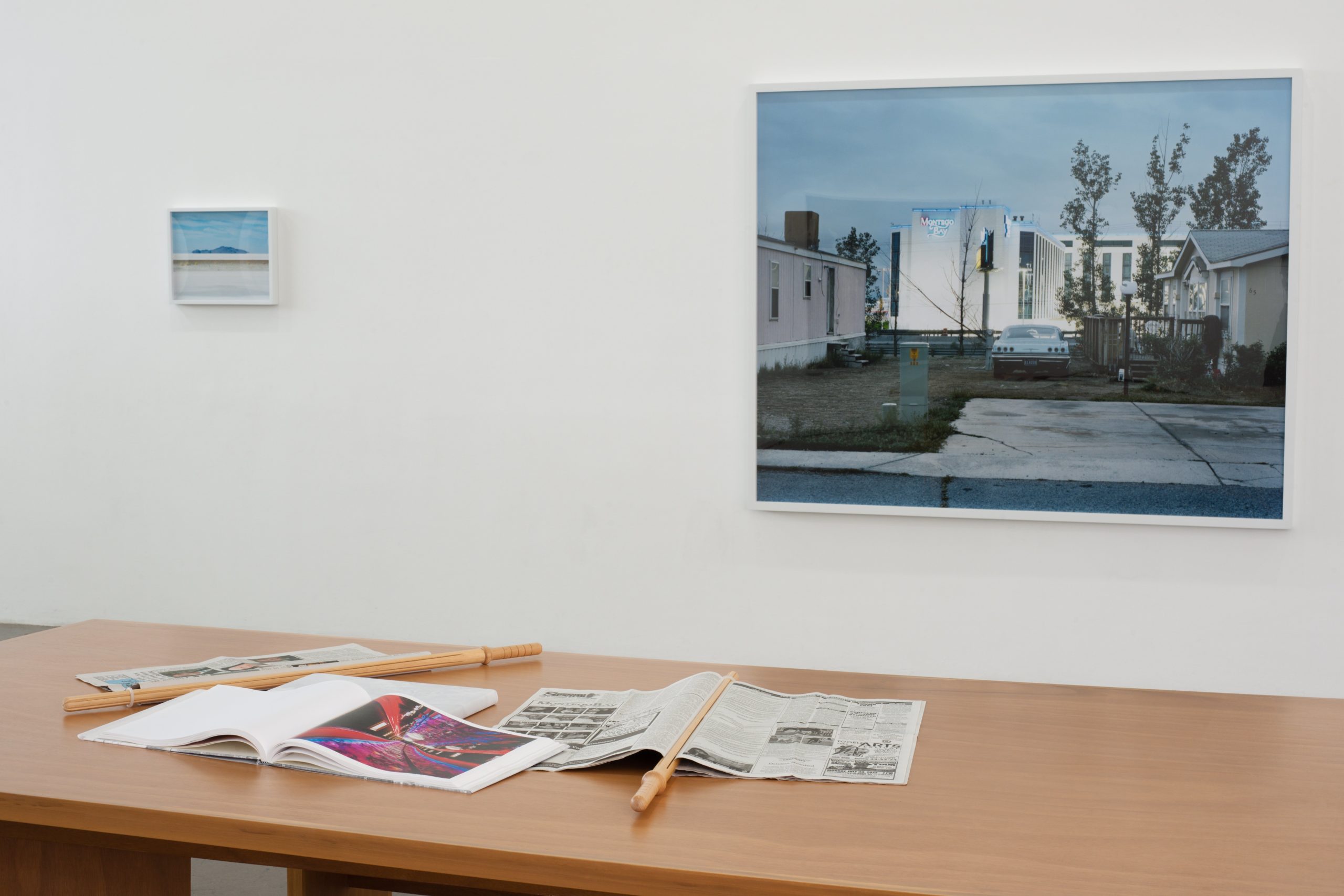 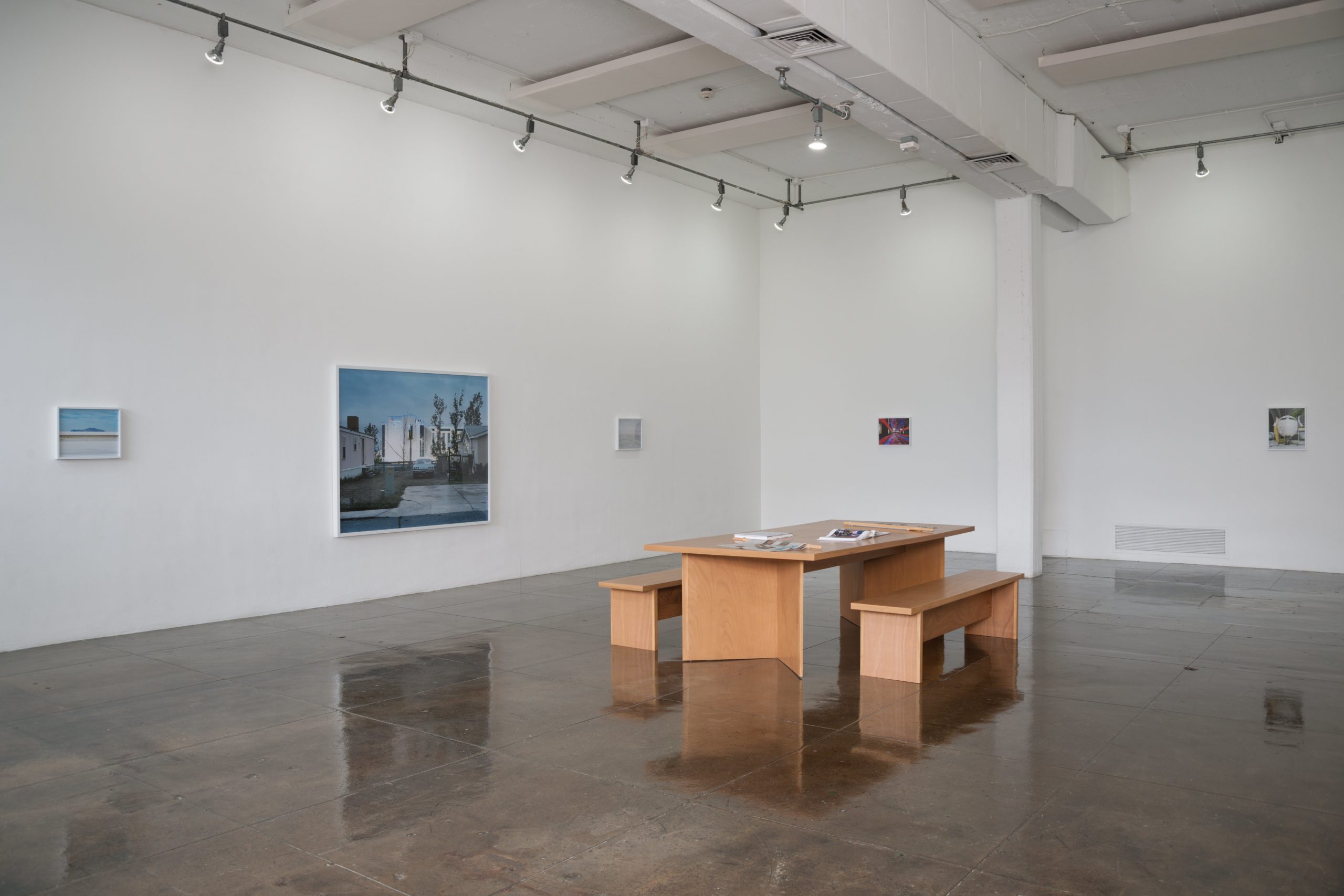 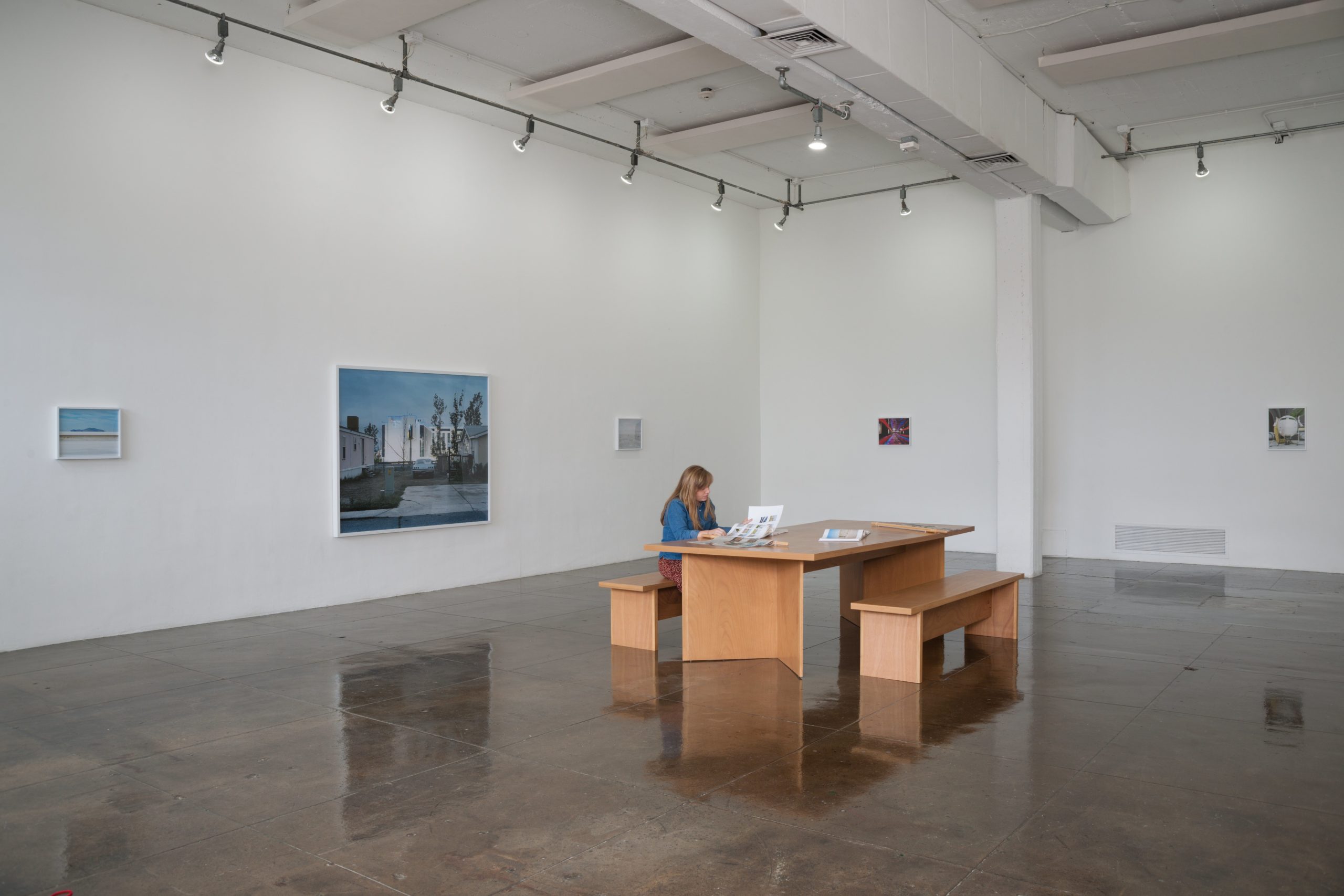 The title Floating Island-which is the name of the exhibition, the book, and the first photograph in the show-refers to a small mountain located at the heart of the Bonneville Salt Flats, several miles east of Wendover. Due to an optical phenomenon known as an inferior mirage, the mountain appears to hover perpetually above the horizon line: a real illusion.

Throughout Floating Island, Osborne plays with the boundaries of narrative, truth, and artifice. While material artifacts such as The High Desert Advocate provide a reference point for the photographs and anchor them to a specific context, the newspapers obscure the fact that not all of the images were shot in Wendover. Among the prints in the exhibition, he includes a new photograph, White Plane, Port San Antonio, shot at a local airplane finishing firm, Gore Design Completions. Though geographically disparate, this new work fits seamlessly into Floating Island’slarger constructed narrative by evoking Wendover’s history of aviation as well as connecting to the project’s more fantastical, otherworldly elements.

Floating Island’s fantastical aspects reflect the landscape’s inherent cinematic allure. The site’s otherworldly roles have ranged from an apocalyptic Area 51 stand-in (Independence Day, 1996) to quasi-Heaven (Tree of Life, 2011). For photographs such as Vertellus (Valley II), which portrays the remnants of a mining operation as though they were the surface of the moon, Osborne also studied depictions of space and celestial bodies in NASA photographs and science fiction films. Werner Herzog’s film Fata Morgana (1971) -in which the director reportedly traveled to the North African desert with the intention of shooting a science fiction movie only to return with a lyrical document of a stunning landscape-was another important inspiration. In its own way, Floating Island attempts to reckon with a landscape by exploring its realities and illusions, and the myths and fantasies they inspire.

At Artpace, Osborne continued work on Floating Island, a project he began during a recent residency provided by the Center for Land Use Interpretation. He chose a remote town as the heart of the project because of a visceral attraction to its landscape and an interest in its unique cultural, military, and economic history. Located in the sprawling Great Basin Desert and straddling the Utah/Nevada border, Wendover (Utah) and West Wendover (Nevada) are home to the remnants of a major military installation, several casinos, and a community of roughly 6,000 people. In the late 20th century, Wendover’s livelihood shifted from dependency on the military (many World War II pilots, including those who dropped atomic bombs on Hiroshima and Nagasaki, trained at Wendover Airfield) to a casino-based economy by the 1980s.

Artpace’s residency provided an opportunity for Osborne to develop a multifaceted installation for this new project. Inspired by land artists Nancy Holt and Robert Smithson and their encounters with this same desert landscape as a site for executing and presenting their work, Osborne treated his Artpace studio/gallery as a “non-site” (to use Smithson’s term) or container for the pictorial and material artifacts of his experience working in Wendover.

From his first day at Artpace, Osborne requested delivery of Wendover’s two weekly newspapers,The High Desert Advocate and the Wendover Times, to enact a dialogue between the sites depicted in the photographs and his studio here. Throughout the course of the exhibition, updated issues of the journals were added on a weekly basis in order to maintain a real-time dialogue between Wendover and San Antonio. In addition to the newspapers, his exhibition integrated both large and small framed photographs and a publication, Floating Island, which consists of 96 photographs grouped in 13 chapters. The book’s editing, sequencing, design, and printing were finalized during Osborne’s Artpace residency. 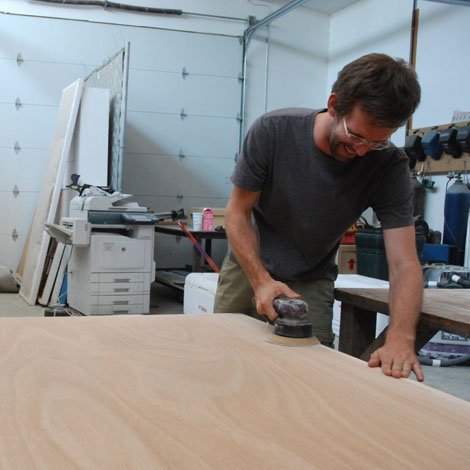 Combining a documentary style with sometimes cinematic qualities, Mike Osborne’s photographs capture the reality and fantasy of specific, sometimes charged places. Exploring subjects such as architecture, public space, landscape, and technology, his work reflects his interest in the perpetual flux of the contemporary world, which can be observed in projects such as Enter the Dragon (2006-2008) in Beijing, Taipei, and Shanghai, China; Underground (2009-2010) in Stuttgart, Germany; and Floating Island (2012) in the Great Basin Desert in Wendover, Utah.
Recently appointed Assistant Professor at Georgetown University, Osborne currently lives and works in Austin, Texas, and Washington, DC. He received his MFA in Studio Art at the University of Texas at Austin in 2006. Solo shows include Papers and Trains, Akademie Schloss Solitude, Stuttgart, Germany (2010), and On Location: Beijing, Houston Center of Photography, Texas (2008). Among a selection of group shows, he participated in Nowhere Near Here, Fotofest, Houston (2011); Photoforum, Museum of Fine Arts, Houston (2010); and 22 to Watch: New Art in Austin, Dallas Center for Contemporary Art, Texas (2006). He has received a development grant from the Graham Foundation for Advanced Studies in the Fine Arts (2008) and, recently, a Dozier Travel Grant from The Dallas Museum of Art (2012). 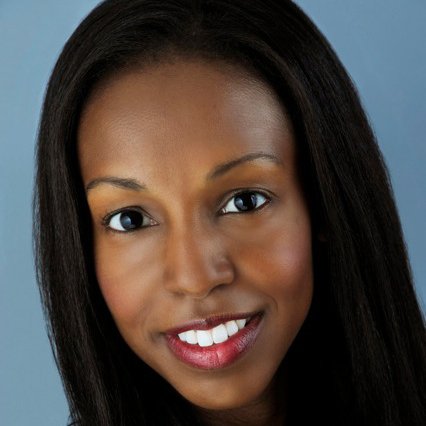 Sarah Lewis is a curator and historian whose writing has been featured in publications for the 2007 Venice Biennial, the Guggenheim Berlin, the Museum of Modern Art (MoMA) in New York; MoMA PS1; Smithsonian Institution; and The Studio Museum in Harlem-as well as Art in America andArtforum magazines. She is also the author of RISE: The Power of Failure in Pursuit of Success, her forthcoming book, which draws on her work in the visual arts and expands into sports, business, psychology, sociology, and science to explore the importance of failure in human endeavor.
Lewis was co-curator of the 2010 SITE Santa Fe Biennial and has also curated at MoMA; Tate Modern in London, England; the Wadsworth Atheneum in Hartford, Connecticut; and the Woodruff Arts Center in Atlanta, Georgia. She has taught in the Department of Painting at the Yale University School of Art, and is a member of President Obama’s Art Policy committee.
Lewis received her BA from Harvard University, an M.Phil from Oxford University, an MA from the Courtauld Institute of Art as a Marshall Scholar, and is currently a doctoral candidate in Yale University’s History of Art Department.
Photo by Frank Stewart 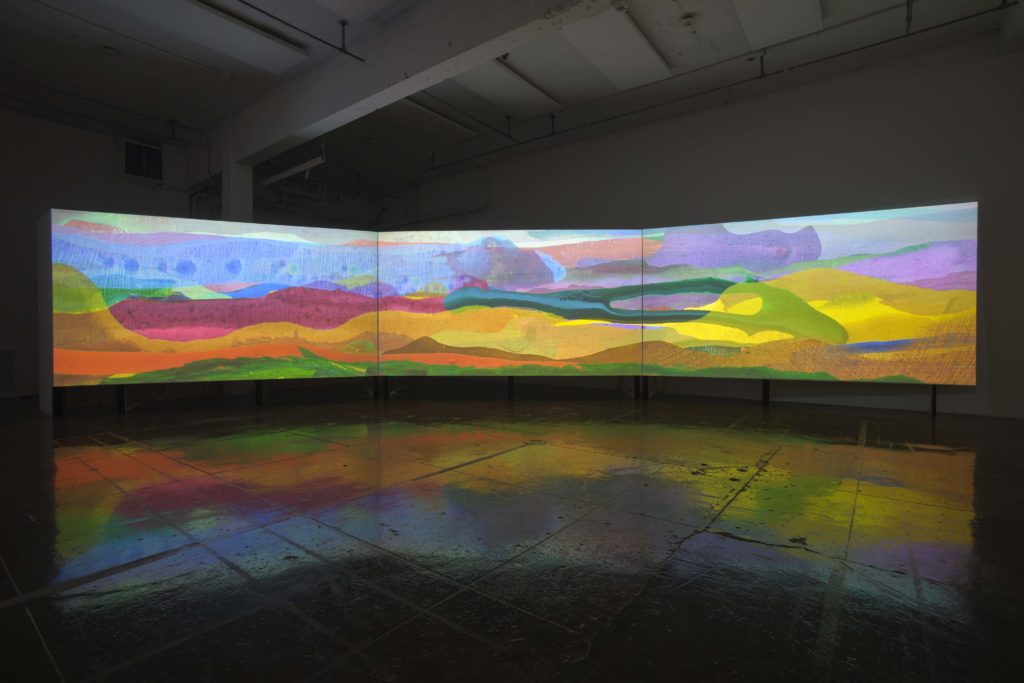 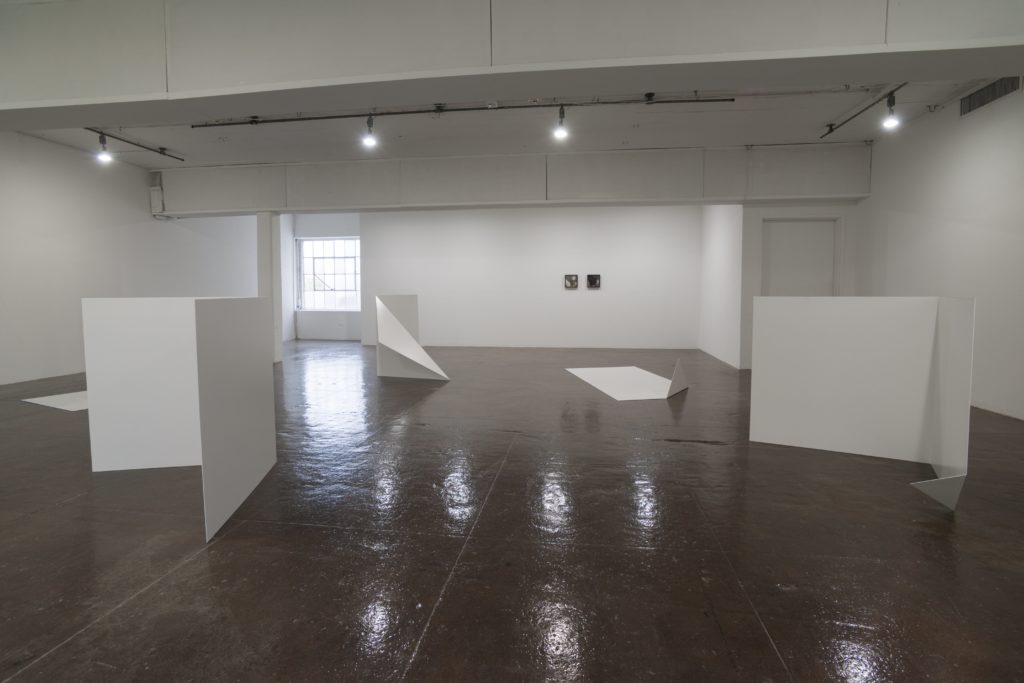 Where Paths Meet, Turn Away, Then Align Again