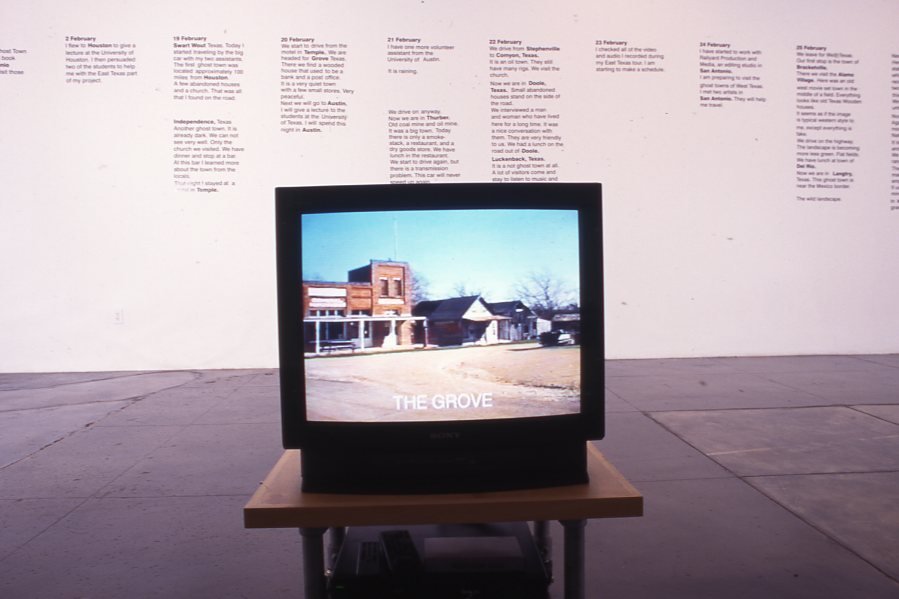 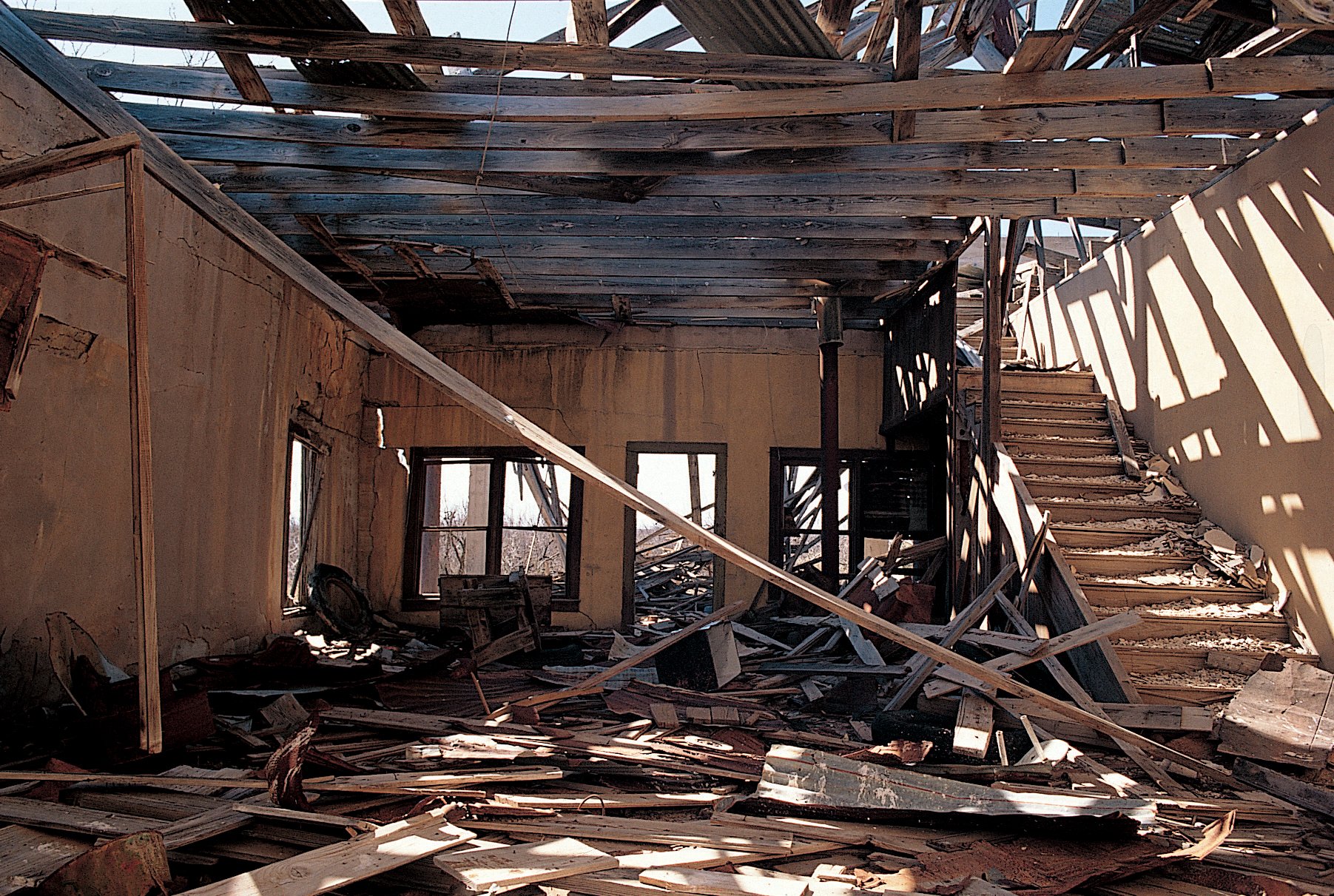 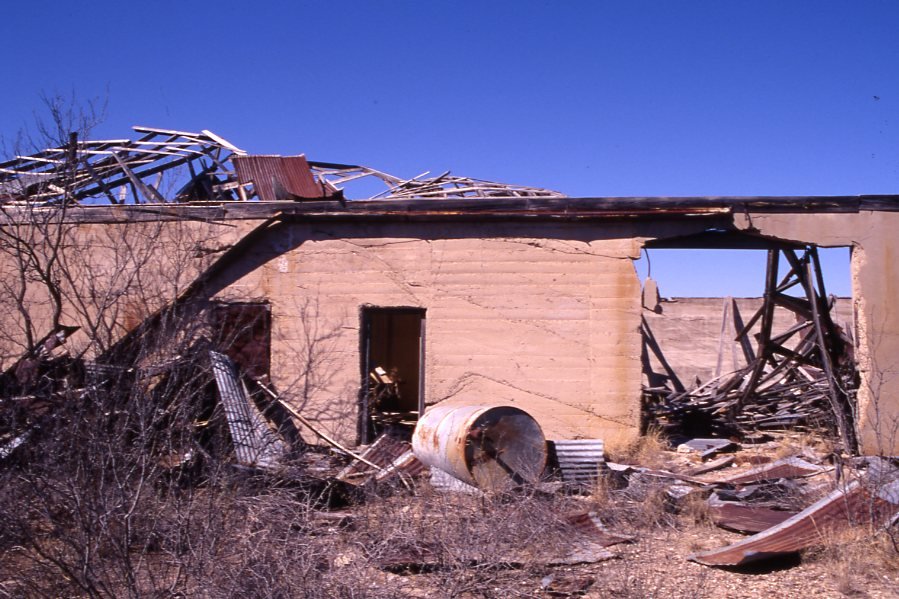 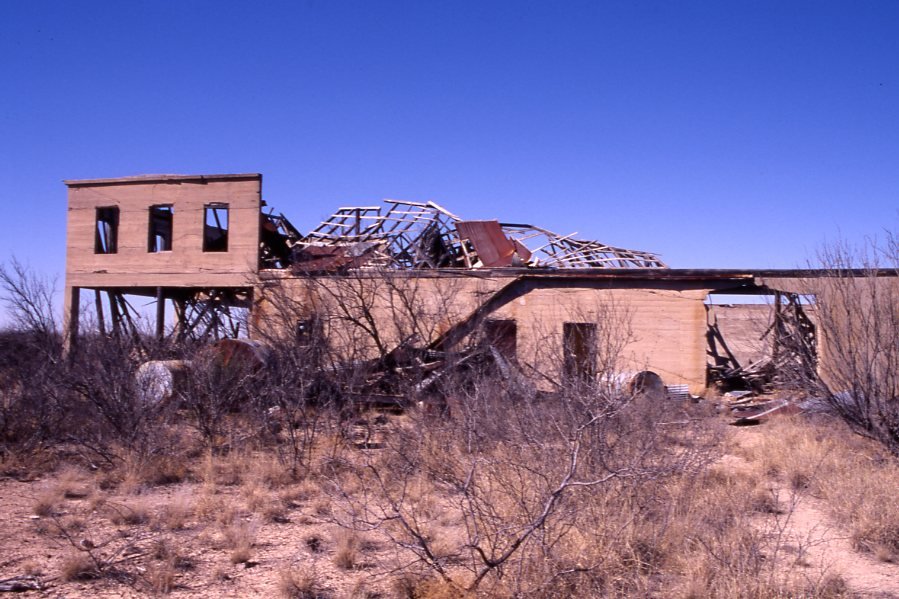 Tadashi Kawamata’s installations almost always take the form of rough wooden constructions halfway between the framework of the fragmentary exoskeleton of a building and the rickety scaffolding that surrounds a structure under repair or awaiting demolition. They are sprawling, chaotic, improvised, and incomplete as if the builders had to leave in a hurry. It seems fitting that in Texas the artist chose to examine ghost towns, which are as near a real-world corollary to his sculptural projects as one can imagine. What is surprising is that the video makes available to us a new reading of his best known works, a tendency obviously inherent in the work all along. In both sculpture and video Kawamata makes clear that there is no useful distinction between creation and destruction, between an exploding catastrophe and a burgeoning renaissance.

Kawamata’s structures resemble homeless encampments, a type of provisional architecture that in its most simple way meets the basic survival needs of its builders. Some, like the favelas of Rio, have lasted decades, are fabricated from stable materials and start to merge into the official buildings of the city. Most, however, are built with the knowledge that they will be torn down whenever the next urban renewal project begins, when local residents demand that something be done to make them disappear.

By conjuring practical building rather than the theorized art of architecture, (which may speak in intentionally self-contradictory ways) Kawamata’s art is by definition optimistic. One does not build or renovate if one has forsaken the possibility of a (better) future. One does not take care to carefully raze a building unless one plans to build anew. If you really think the world is ending, you merely abandon the building to the elements.

Surely then we should expect that the locales depicted in the videotape Kawamata Ghost Town Texas must be understood as dusty monuments of tragic failure and ruined lives, but that is not the case. The vast space of the United States pinch-hits an endless future as the agent of continuance in Kawamata’s examination.

The opening shots of the video, taken in the town of Girvin, are startling in how much the collapsed roof and tangle of wooden planks look like a Kawamata installation. The look is romantic and vast—Kawamata is clearly not afraid of getting overpowered by the larger than large mythology that Texas conveys. The piece is structured by the names of towns such as Thurber and Pumpville. The list reads like found poetry, mixing nonsense syllables and Americana. Our amusement at the quixotic list must be tempered in the knowledge that the names once meant home for some people, and still have significance in the memories of others as ‘the place where Mom is buried,’ or ‘where they went all the way for the first time.’ We hear a woman’s voice in the front passenger seat of the car in which Kawamata roams. She tells of her perception that ‘people come to Texas to accomplish something, for a purpose,’ drawing a comparison between current Texans, those of the past whose former homes we visit, and the artist’s traveling entourage. It is only after the tape has moved through to its conclusion that we realize the universal applicability of her words; no one ever goes someplace to accomplish nothing, without any purpose. One may misjudge, set an illogical goal, or merely fail. But even the most stubborn slacker is trying to achieve something—even if that goal is only to be left alone and sleep a lot.

We work through the hypnotic tape, observing scurrying tourists, park rangers and a selection of locals, and passing through gorgeous landscapes and picturesque ruins. We hear a few narratives as to why towns were abandoned. One was made useless by the switch from steam powered trains to diesel—another example of destruction linked to progress. Finally, the artist sums up the lesson in few words, ‘This is a history of these people who had options to get a better life.’ The ruins symbolize neither failure nor success but merely perseverance.

Finally, what Kawamata’s work always does is give us a way to look at the history of his chosen sites in all their complexity, whether the destroyed church he used for Kassel, West Germany an empty lot on a busy Toronto shopping street, or the ghost towns of Texas. His work invites a nonhierarchical reading of one event following another as if ruled by the logic of small necessities. That runs counter to the easier reductive reading of seeing events either in terms of progress or regression. Kawamata’s interventions encourage us to see the richness of life’s pageant in holistic terms and appreciate the miracle of the billions of people continuing to rise in the morning and tend to themselves. We must celebrate our collective tenacity—even when our desire to keep living must be manifested by rebuilding after a war or abandoning a small Texas town, the name of which name was once synonymous with home, because the next home promises to be better.

Bill Arning is an independent curator and critic based in New York. 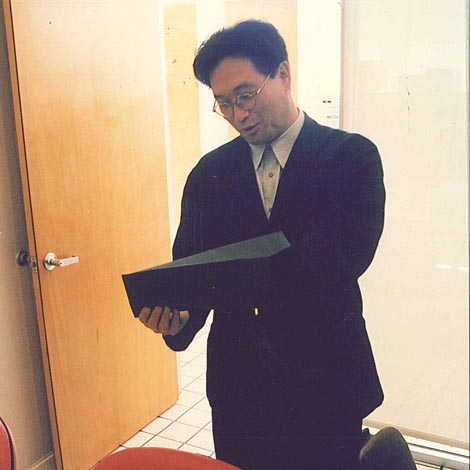 Born in 1953 in Mikasa, Hokkaido, Japan, Tadashi Kawamata lives and works in Tokyo. Since 1979, Kawamata has had projects commissioned throughout Japan and the globe, including public projects in Tokyo, New York City, Toronto, London, Houston, Zurich, Vienna, Geneva, Barcelona, and Munster. He has participated in a number of inter-national festivals, including the 40th Venice Biennale, Documenta 8 & 9, the 19th Sao Paulo Biennale, the 1993 Lyon Biennial, and the 1997 Sculpture Project Munster. 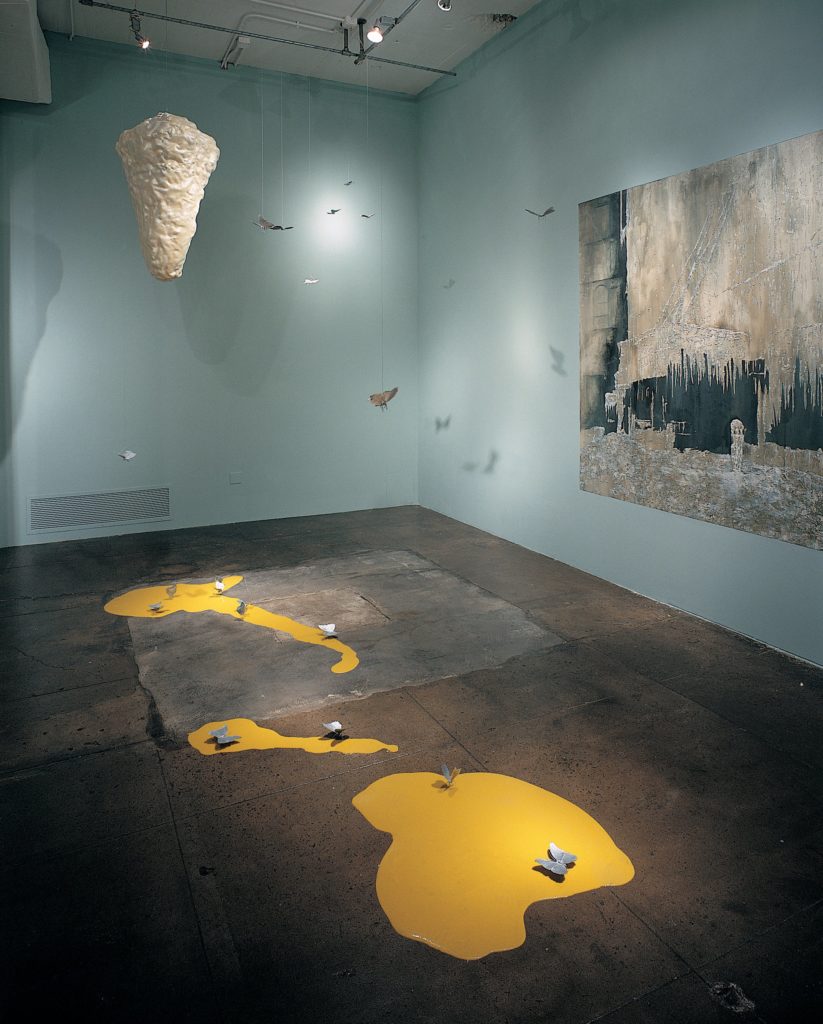 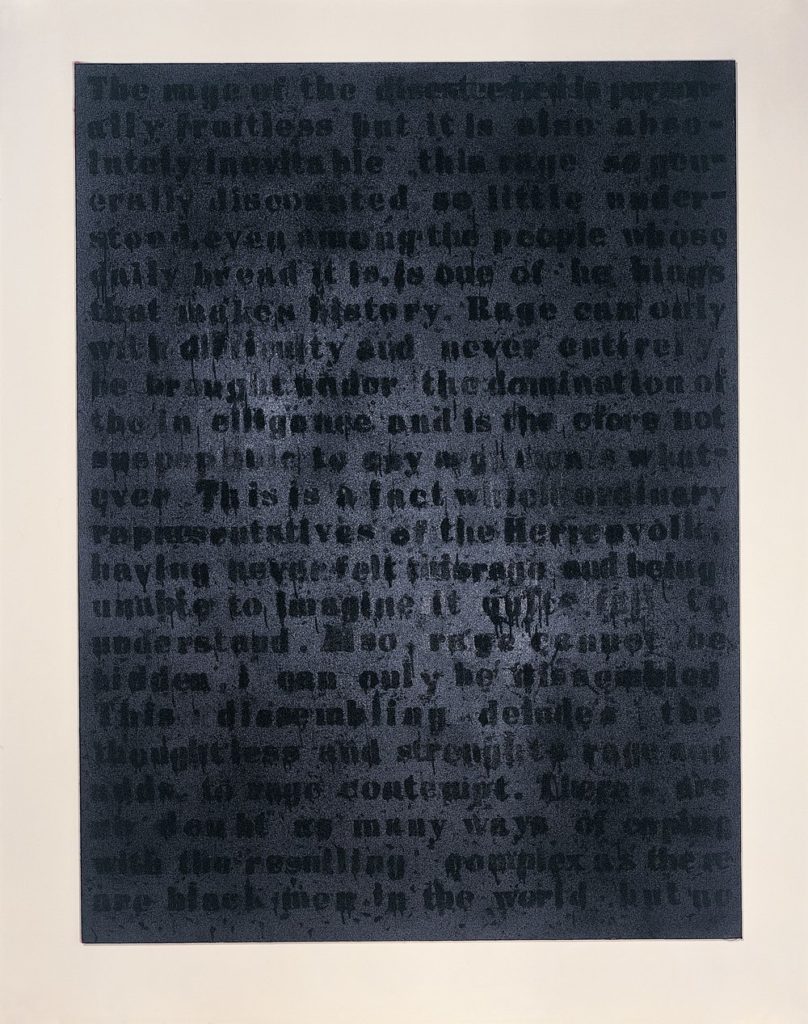