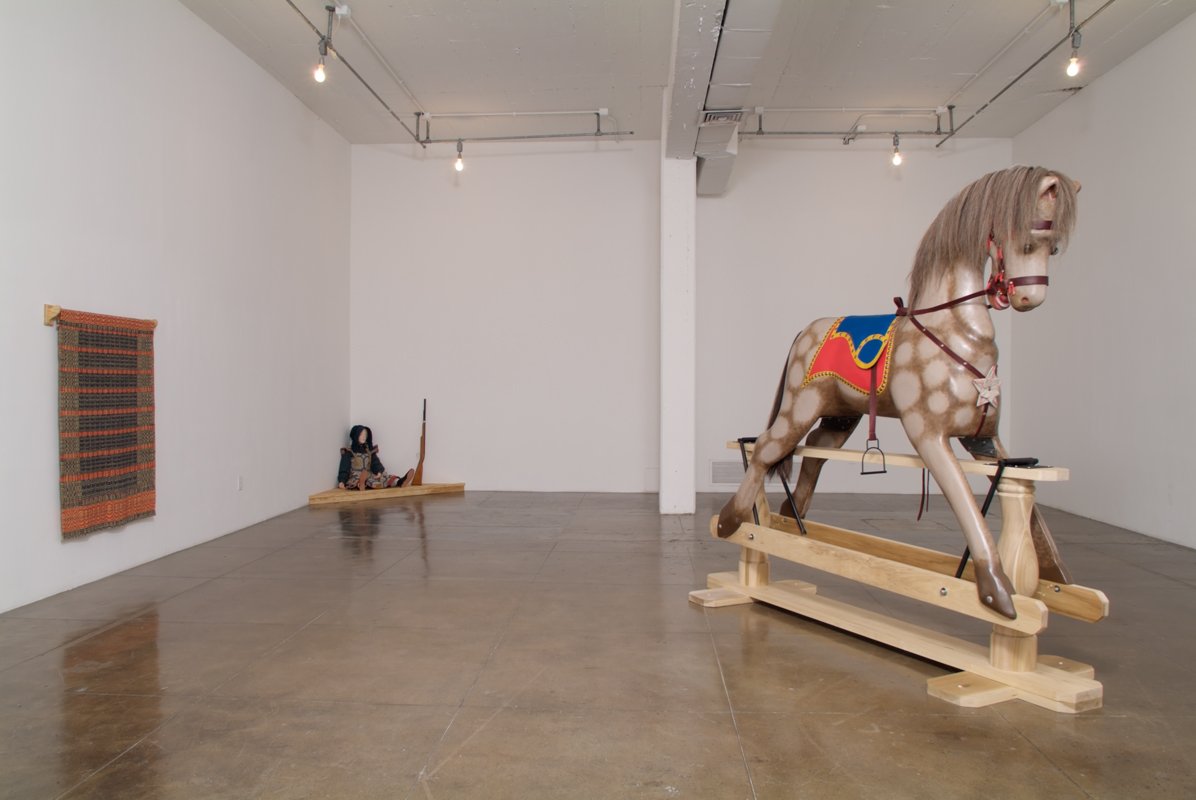 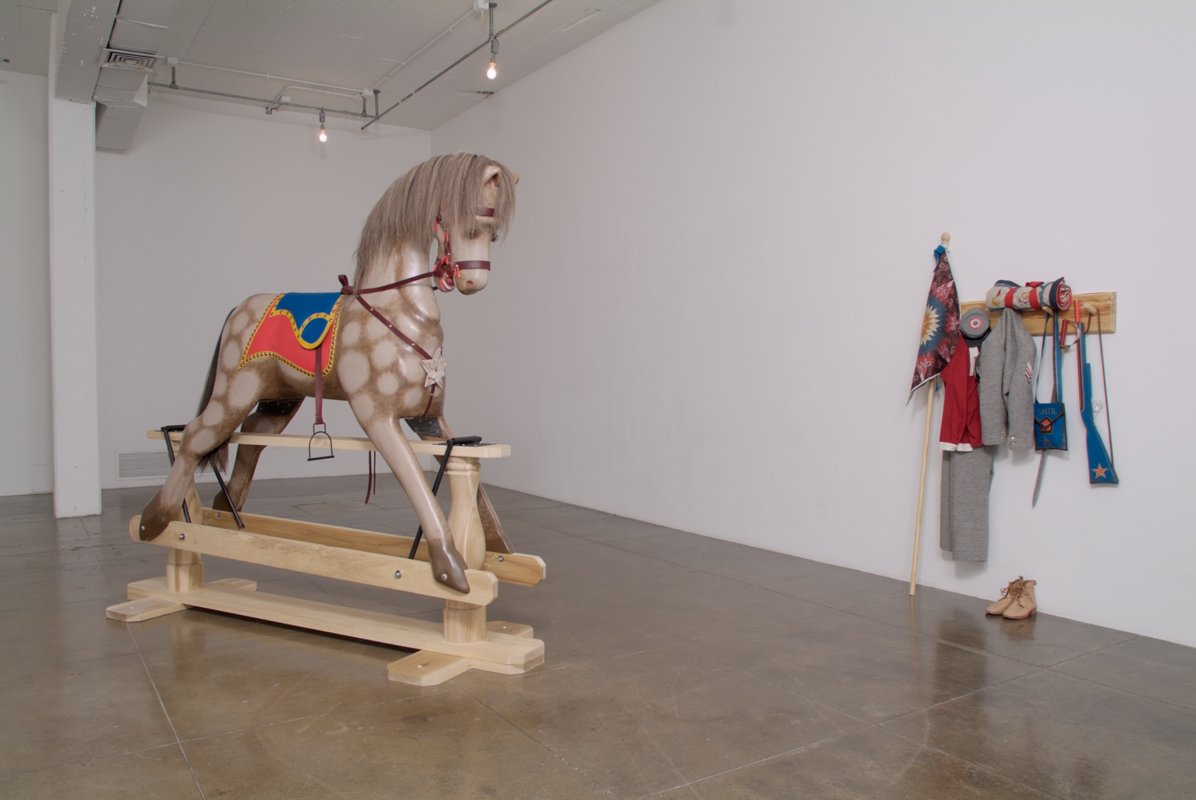 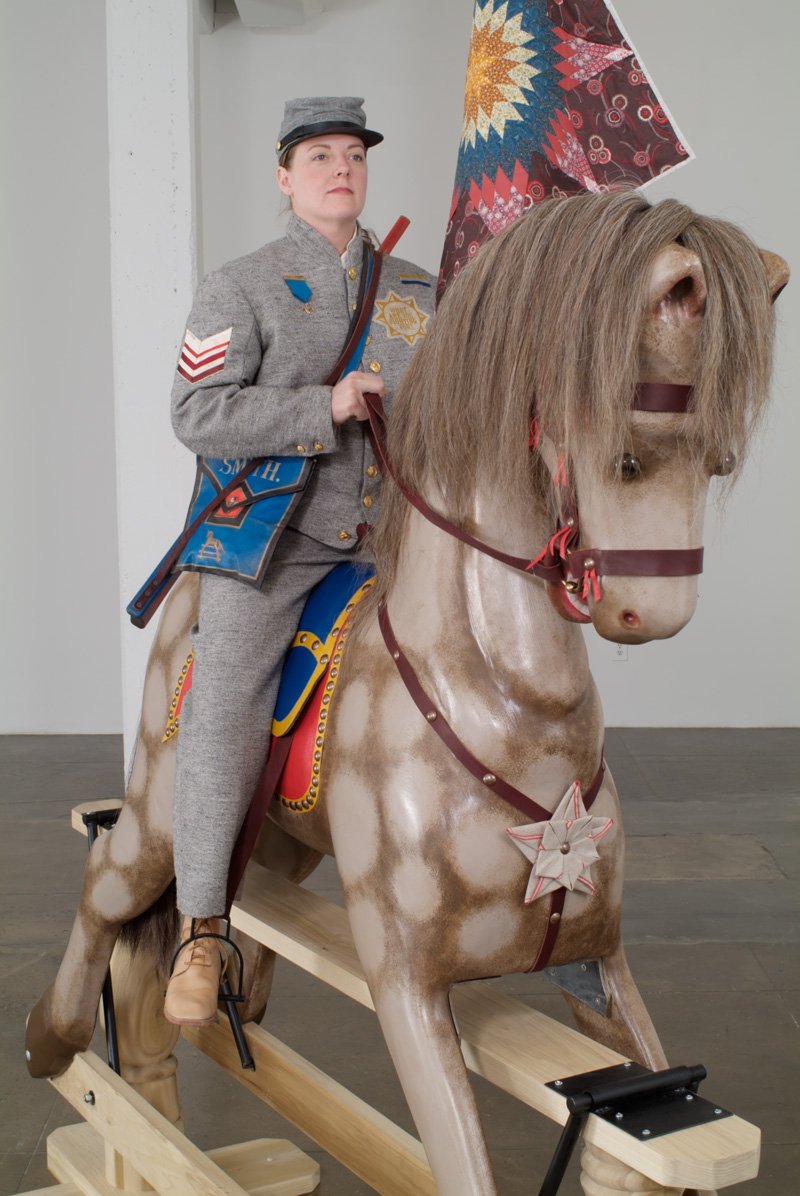 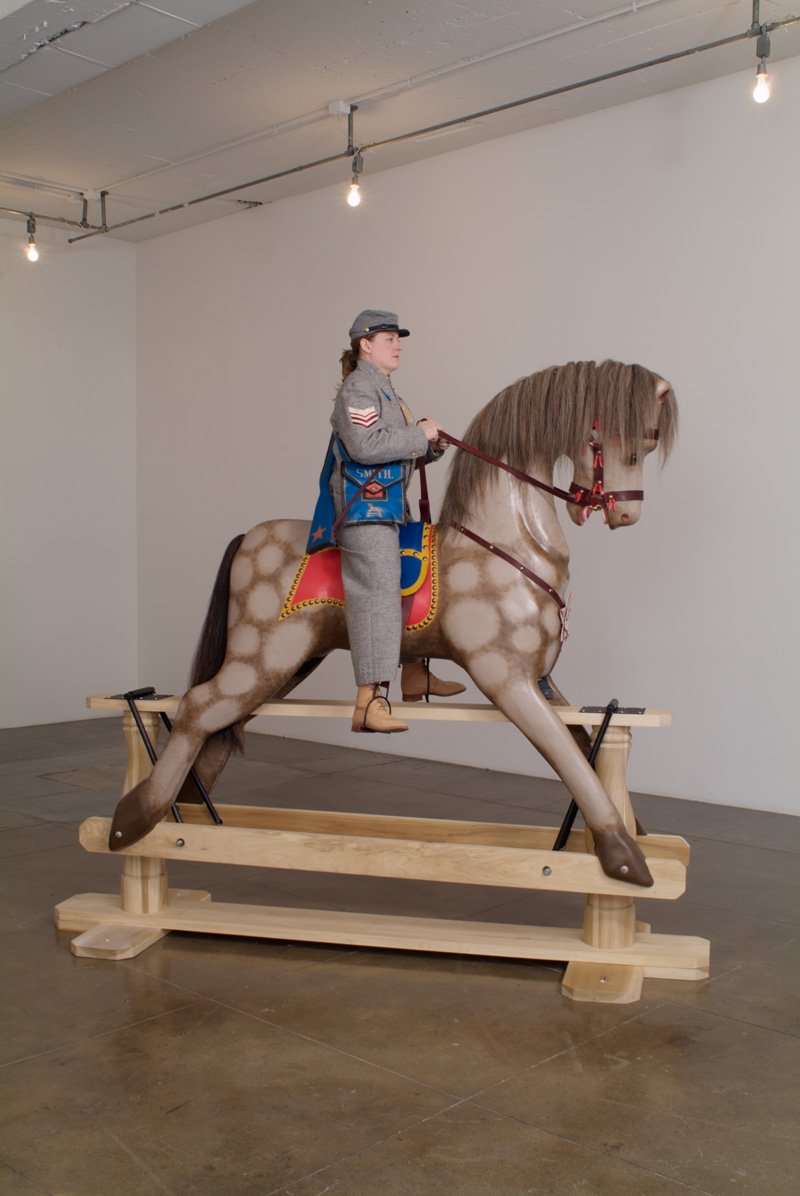 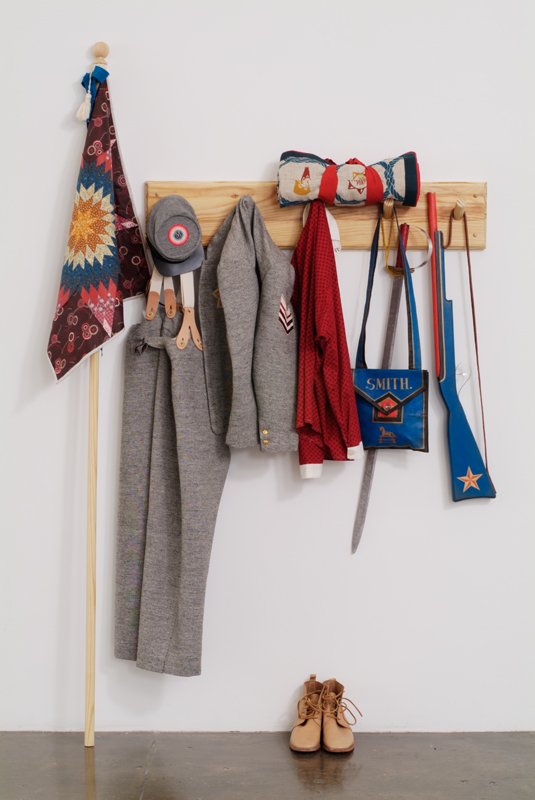 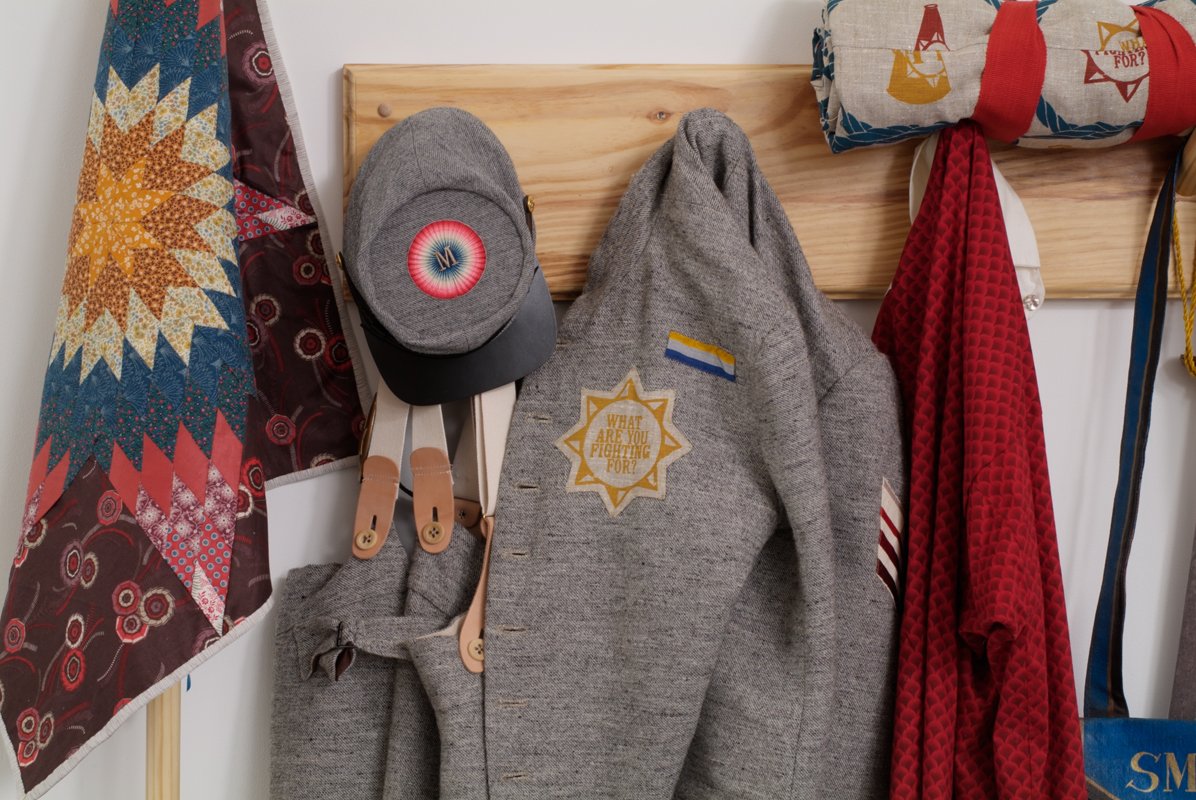 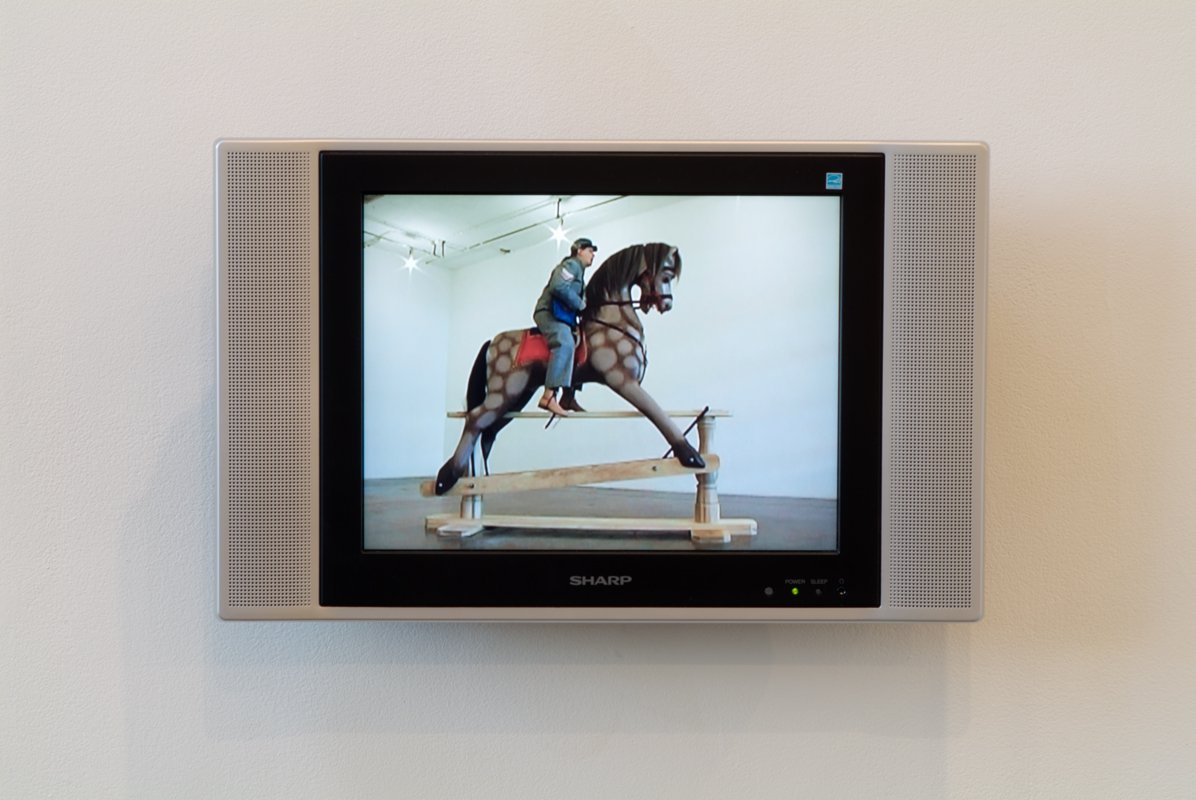 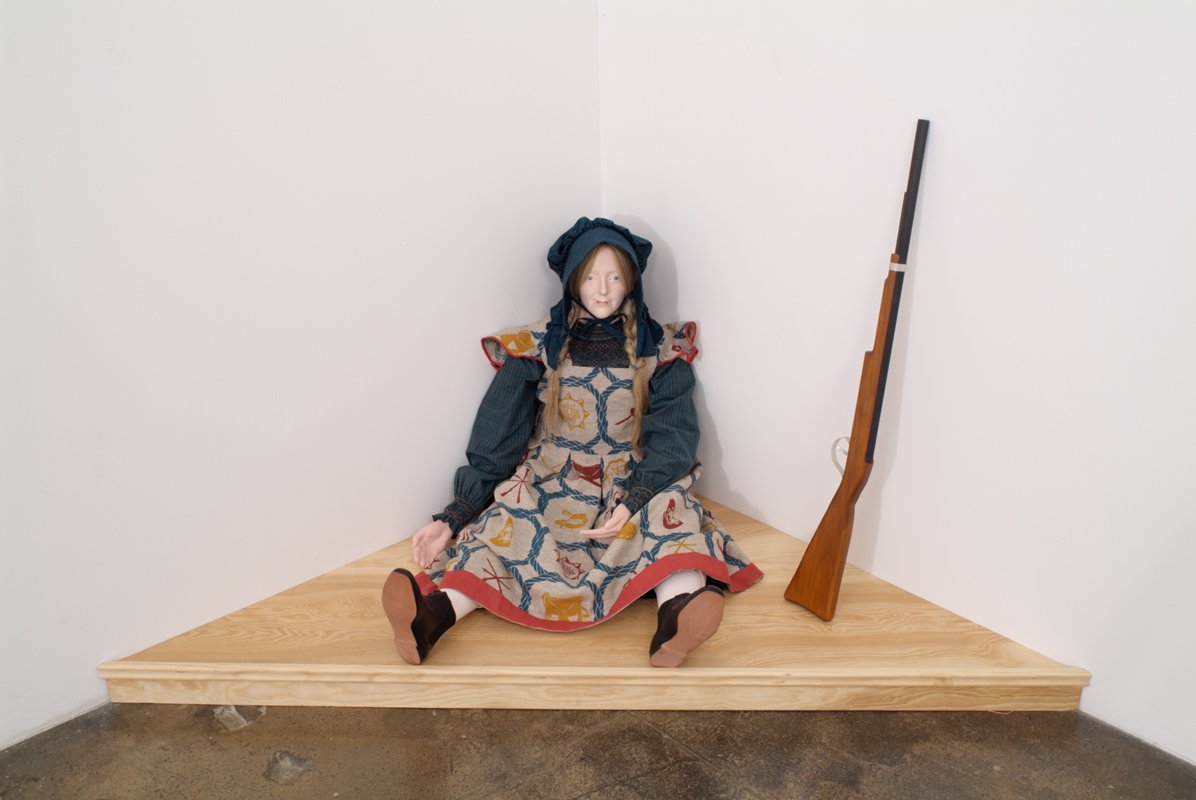 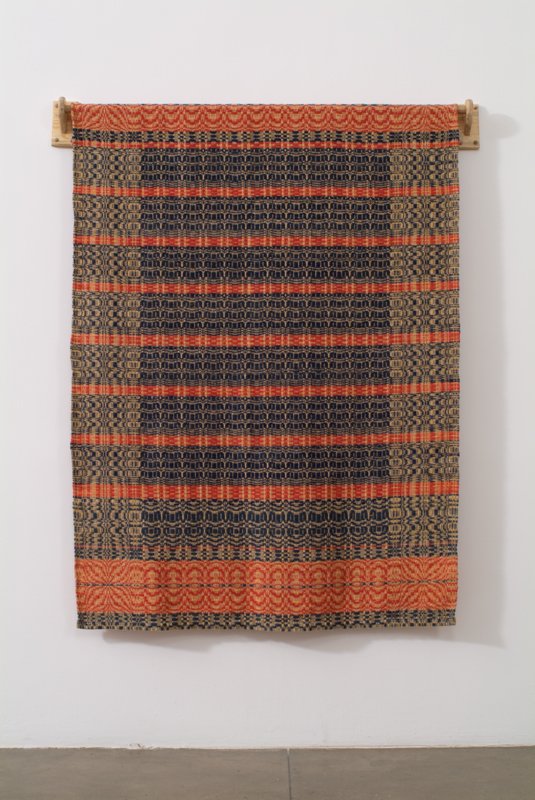 Allison Smith’s Artpace project continues to examine how political meaning can reside within aesthetic forms and to employ history to comment on current events.

Featured is Hobby Horse, a performance-based sculpture of the traditional child’s toy, complete with horsehair, glass eyes, and handmade bridle. Standing more than nine feet tall, the oversized object lays bare the militaristic spirit of this old-fashioned plaything and probes equestrian statuary’s commemoration of bloodshed. The performance staged by Smith at the exhibition’s opening further engaged this duality. Donning a replicated Civil War-era uniform and carrying a handcrafted flag, haversack, and rifle—all deposited in the gallery after the event—the artist mounted Hobby Horse and sang a lullaby, set to the time-honored battle hymn “When Johnny Comes Marching Home.” However, Smith replaced the original lyrics, which are celebratory, with her own, which speak of living in divided times of cultural impasse. A limited edition print of the song sheet accompanies the show.

With her handwoven coverlet Security Blanket (Drums of War), Smith has evoked the politics of textiles. Smith altered the 19th-century design Lee’s Surrender to include oil drums, an allusion to the position of economics in contemporary conflicts, and used red, blue, and yellow, a trio of recurring hues that represent both the US today as a polarized nation and the primary colors of art.

Also included is a life-sized pioneer doll clad in a smocked dress, bonnet, and boots. Made using doll parts cast from her own body, this surrogate object affords Smith an opportunity for role play while addressing the socialization of children through toys. Handprinted in blue, red, and yellow on the girl’s pinafore is Smith’s refrain: What are you fighting for? 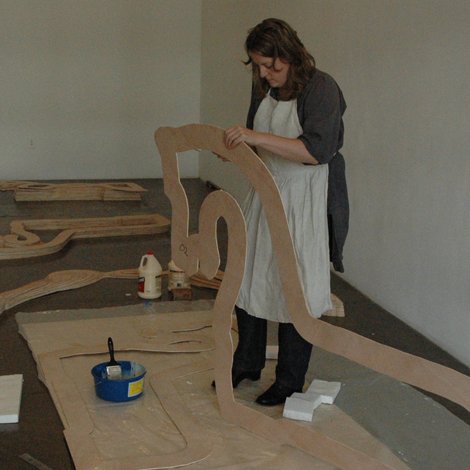 Allison Smith’s objects and performances restage pivotal moments in American history to illuminate contemporary political issues. The myriad elements used in her projects, such as dolls, quilts, and uniforms, are handmade and labor intensive, foregrounding the role of craft in the construction of cultural identity.
Inspired by Civil War reenactments, recent performances have combined art and social activism to stage modern-day musters (rallies), asking uniformed participants, “What are you fighting for?” A related installation, Victory Hall (2005), included framed calligraphic war songs and a decorative wall pattern made of carved wooden rifles. Strewn upon a floor-painted compass rose were human-scaled porcelain dolls clothed as Zouaves, flamboyant male and female soldiers known for their eccentric uniforms and precision in battle. Smith navigates binary oppositions, like masculine and feminine, death and life, north and south, to both critique and celebrate.
Allison Smith was born in Manassas, VA, in 1972 and currently lives in New York, NY. She received her MFA from Yale University School of Art, New Haven, CT, in 1999. She has presented solo projects at Qube, Shropshire, UK (2006); at Bellwether, New York, NY (2005, 2002); and with the Public Art Fund, Governors Island, New York, NY (2005). Her work has been included in Ahistoric Occasion, MASS MoCA, North Adams, MA (2006); The “F” Word, Andy Warhol Museum, Pittsburgh, PA (2006); and Greater New York, P.S.1 Contemporary Art Center, Long Island City, NY (2005).

Tom Eccles is the Executive Director of Bard College’s Center for Curatorial Studies. Prior to that appointment, Eccles served as Director of the Public Art Fund, New York, NY since 1996. While at the Public Art Fund, Eccles defined new directions for the creation and installation of contemporary art in public spaces, organizing engaging exhibitions with artists such as Vito Acconci, Mark Dion, Christine Hill, Kim Sooja, Olav Westphalen, and former Artpace residents Teresita Fernández and Paul Pfeiffer. Eccles holds an MA in Philosophy and Italian from the University of Glasgow in Scotland and has lectured at colleges and universities throughout the United States. 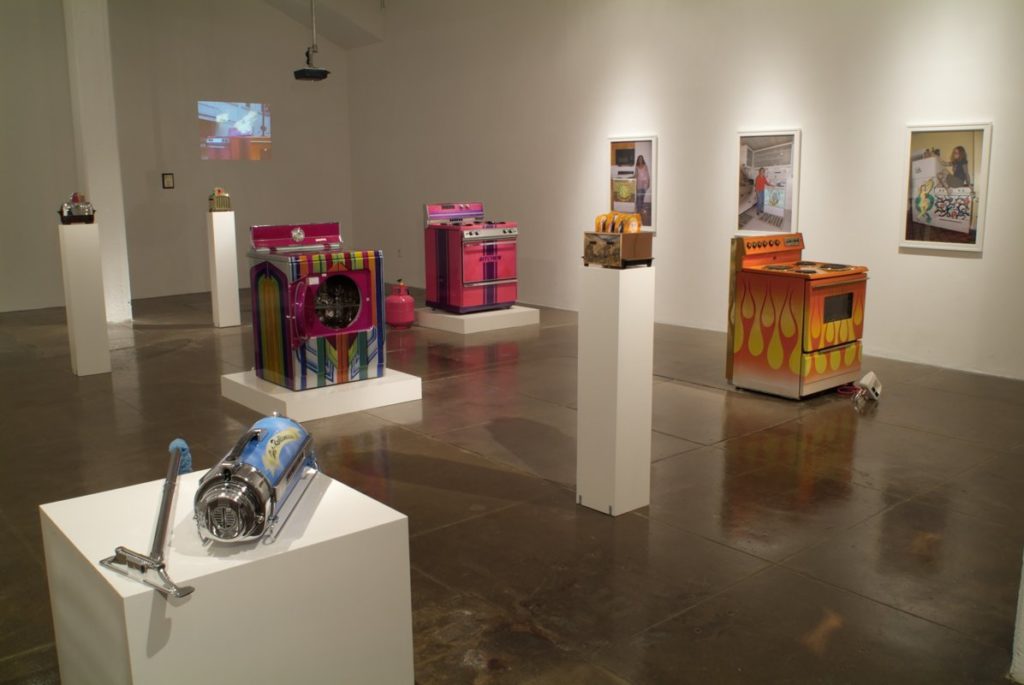 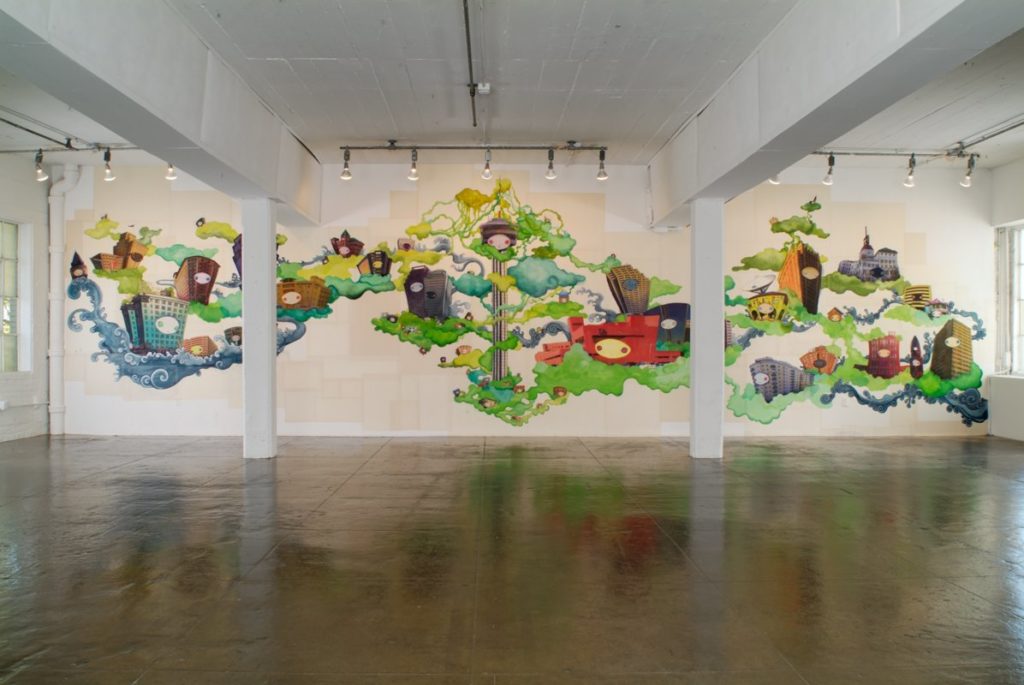 As we died, we began to regain our spirit