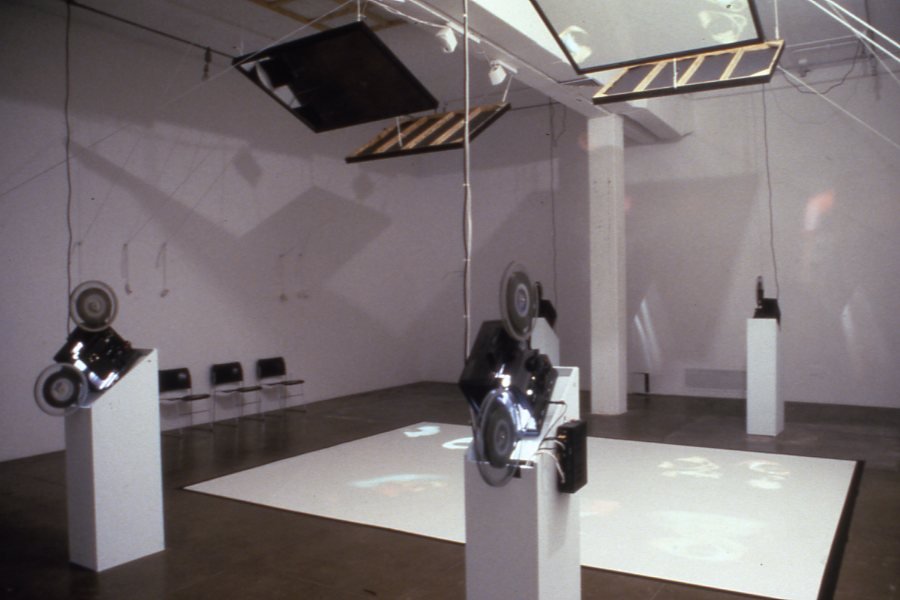 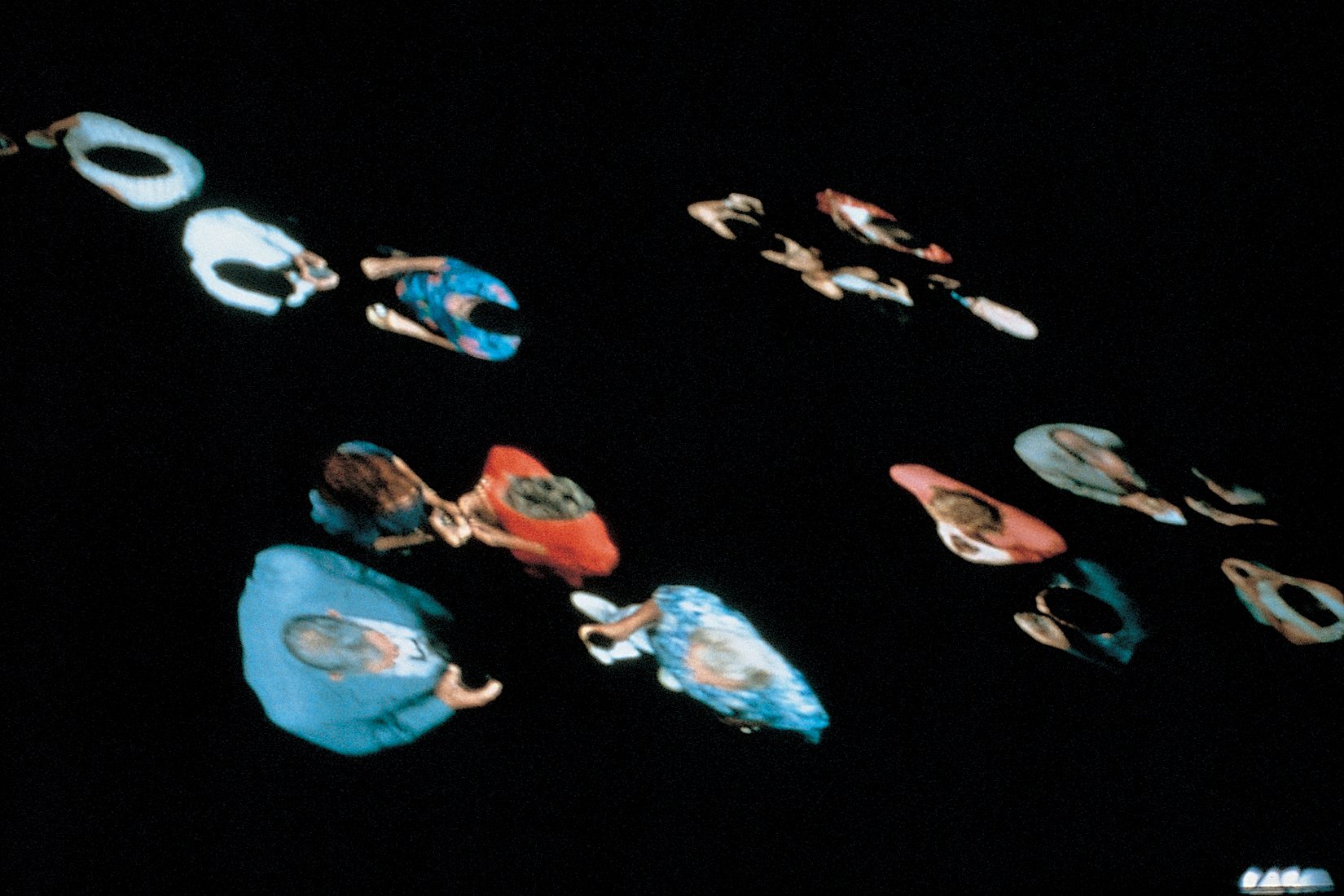 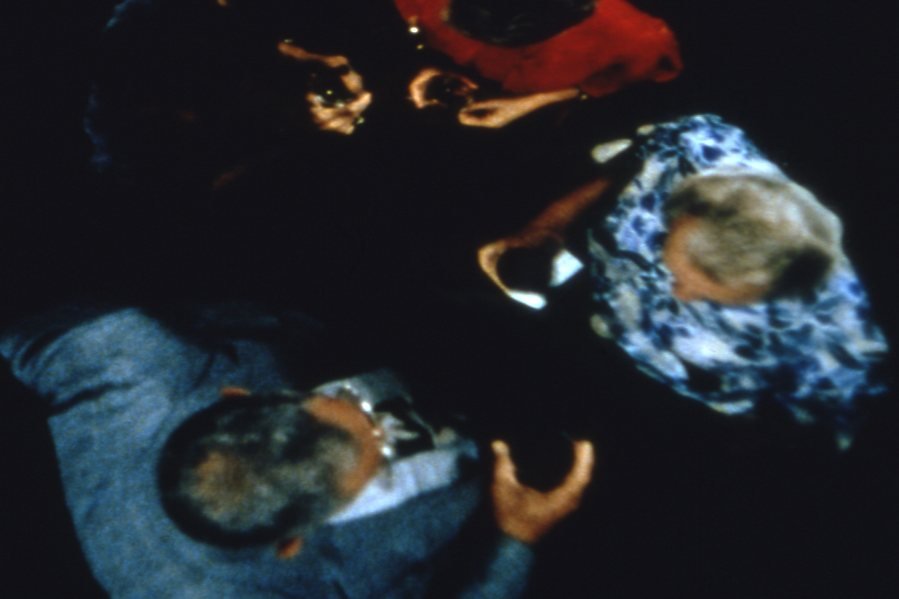 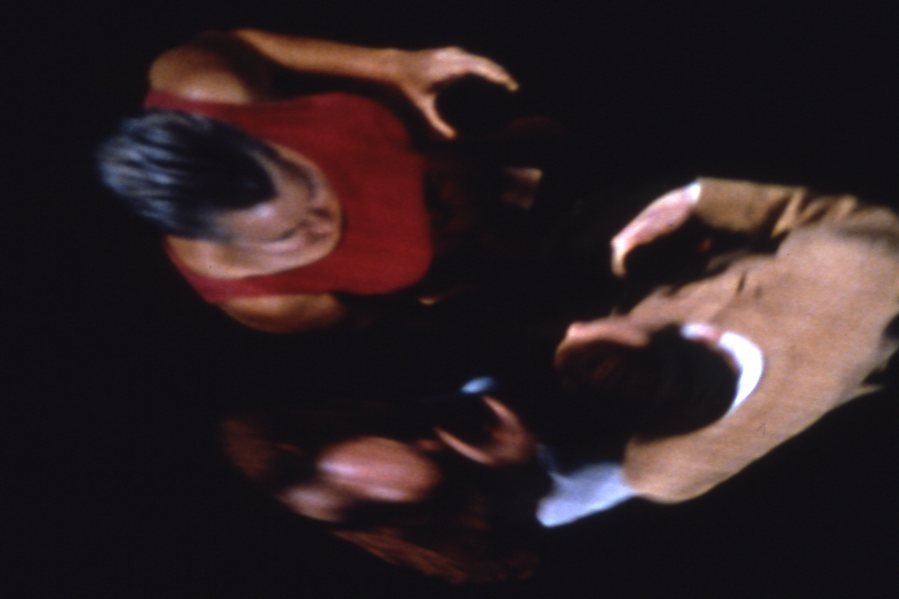 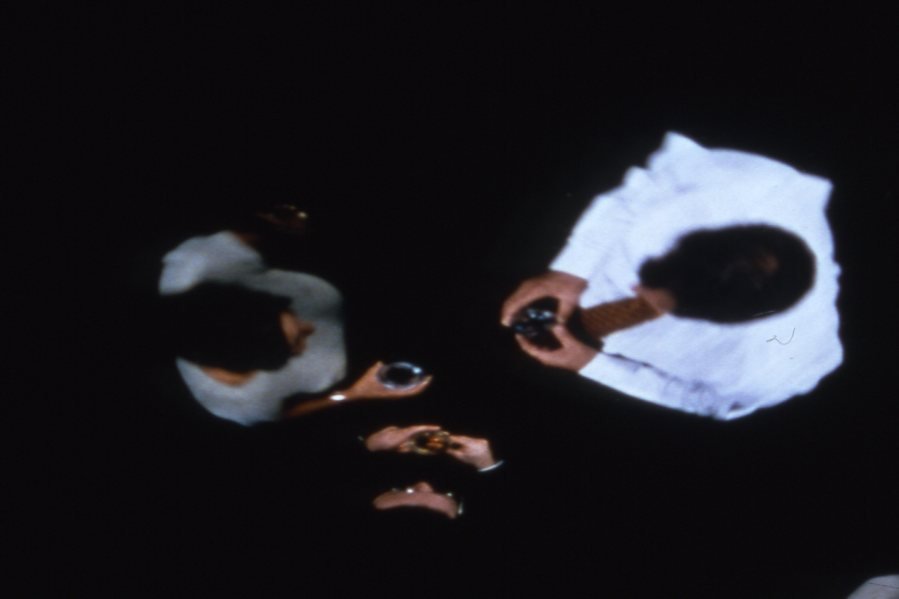 The film installations of Bill Lundberg occupy a position somewhere between film and sculpture. The tension between the concrete and the illusory which characterizes his richly textured images is rooted in a unique moment during the mid-1960s, when the traditional space of cinema was dramatically transformed and the new medium of video began a perceptual inquiry into the relationship between artist, artwork and viewer. In both cases, artists redefined the parameters of the moving image within social space. Lundberg’s film pieces infuse this radical shift with a profound concern for human psychological behavior, a pre-occupation shared by many artists in the late 60s and early 70s who used the new, real-time feedback properties of video directly to engage the viewer in a dialogue with themselves and others. The specific formal and temporal qualities of film remove the possibility of direct engagement, however, since real-time feedback is impossible. Thus film is the ideal medium for Lundberg, since his concern is not personal psychology, but the psychological character of society.

Trained as a painter at Berkeley in the mid-60s, Lundberg began to experiment with film in 1965. But it was not until ten years later, while living in London, that he made his first three-dimensional film installation, using illusion and narrative to create a subjective exploration of psychological behavior. In his earlier pieces and his most recent piece, Opening (1998), created during his residency at Artpace, the film image presents a simple action, the observation of which exposes the subtle nuances of human vulnerability.

In Opening, four films showing clusters of people in bright clothes attending a cocktail party, filmed directly from above in a darkened space, are projected down onto a white surface in the middle of the gallery floor, creating a single, large image of perpetually moving, almost abstract colored forms. The staging of the figures relates to Lundberg’s early paintings, which constructed hyper-realistic scenes stripped of background context.

The acute overhead filming angle in Opening creates a sense of looking down onto a crowd, which is seen in severe foreshortening. This distances and, by implication, conceals the viewer from the activity taking place. Yet the constructed distance allows an intense, almost voyeuristic scrutiny of the social behavior of the participants as they interact with each other in a constant ebb and flow of gentle, swaying movement. Lundberg’s filming angle and distance evoke Maurice Grosser’s observations of the artist’s approach to the portrait subject: “At more than thirteen feet away…the human figure can be seen in its entirety as a single whole…we can look at as if he were a shape cut out of cardboard, and see him…as something as having little connection with ourselves…At the normal distance of social intimacy and easy conversation, the sitter’s soul begins to appear. Nearer than three feet, within touching distance, the soul is far too much in evidence for any sort of disinterested observation.”1

As in traditional painting, in Opening, the viewer is guided to, and also measures, the distance delineated by the artist in front of the subject. This process evokes the first stage in George Quasha and Charles Stein’s discussion of Gary Hill’s Viewer (1996), a large-scale video projection of a group of men standing impassively against a similarly abstract, dark background: “View, viewing, space, the viewer’s state of presence…are all linked to a matter of focus…there is…interactive focus, by which we mean the phenomenon of focusing on the image of [the] other person in a such a way that we ourselves seem to get focused…This in turn produces a field focus, activating the whole of the viewing space, so that the shared sense enlarges and the other figures come alive in new ways.”2

This statement articulates the phenomenological basis of video installation from the 1970s to the present, in which meaning shifts from the object to the viewer in space. In early interactive video installations from the 60s by artists including Frank Gillette, Ira Schneider and Les Levine, 70s pieces by Vito Acconci, Dan Graham and Peter Campus, and in more recent pieces by Gary Hill, there is a process of meeting, of a stark confrontation with the self, in mirrors and live video feedback, or with others, through frontally presented projections of unknown groups of people. It is the viewer who experiences the resulting psychological tension or discomfort. Lundberg brought viewers face to face with their archetypal selves in Personne (1987), in which three films of a theater audience were projected in a wide-screen, panoramic format across a thirty-foot-wide screen. As the viewers confronted the crowd, the audience appeared to respond with periodic applause and laughter.

In Opening, by contrast, Quasha and Stein’s second stage of focus is not activated, as the meeting between people takes place on the screen, rather than in the gallery. Lundberg renders the encounter with the other oblique. Unlike the confrontational video pieces, we see neither the people’s faces nor the full stretch of their bodies. The complex anxieties of social interaction are witnessed second-hand, experienced by others at a distance.

The positioning of the screen as a discrete plane on the floor paradoxically reaffirms the traditional power of the cinematic image to draw the viewer into its narrative space, rather than suggesting a merging with the physical space of the gallery. The visible presence of the four projectors within the gallery space creates a further paradox. On one hand, the old-fashioned, mechanical act of projection emphasizes the isolated position of the film image as a physical plane inserted into the space and so reaffirms the cinematic over the phenomenological ‘field focus.’ On the other hand, the fiction of the image as a cinematic construct is revealed by its radical spatial presentation. Lundberg creates a space whose meaning lies somewhere in between the cinematic (filmic) and the perceptual (video) experience of the moving image.

The transformation of the entire gallery into a spatial metaphor asserts a third, sculptural meaning. Several of Lundberg’s earlier works were more sculptural. In Silent Dinner (1975), a 45-minute film of a dinner, shot from above, was projected onto the table at which the dinner had taken place. To view the work, the audience sat at the table and became interactive with the illusion. In Outlook (1979), Lundberg filmed people, in profile, telling stories, often of regret and disenchantment. One woman was two-timed by her lover; another discovered that her father felt indifferent towards her. The films were projected onto three life-size mylar profile silhouettes, attached perpendicular to the walls of the gallery, three feet above the floor. Once again, the viewer observes a glimpse of people’s lives from a position above the projection.

In Opening, through the flatness of the large moving image, sumptuousness of color and richness of texture, this concrete form undergoes a further transformation from the sculptural to the photographic. At the same time as Lundberg deconstructs cinema, he returns film to its historical roots. In his paradoxical construction—where expanded cinema, sculpture and photography are united within a single, performative environment—the gap between the concrete and the illusory echoes the loneliness of the observer and the observed, passing silently around and amongst each other, either in groups within the film image or as viewers outside it, locked inside their own interior worlds. 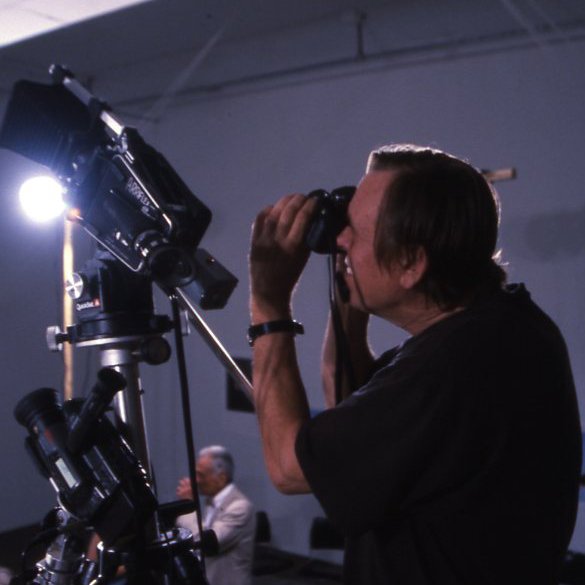 Born in 1942 in Albany, California, Bill Lundberg lives and works in Austin, TX. Lundberg holds a B.A. from San Jose State College, San Jose, CA. and an M.A. from the University of California, Berkeley. Since the early 1970’s, Lundberg has exhibited his work internationally, including solo shows at the Whitney Museum, New York; the Carnegie Museum of Art, Pittsburgh; and Espace Lyonnais D’art Contemporian, Lyon, France. Lundberg’s work has also been presented in such group exhibitions as the 1983 Whitney Biennial, “Concept, Document and Narrative” at the Museum of Contemporary Art in Chicago, and in “Drawing Distinctions: American Drawings of the Seventies”, which toured museums in Switzerland and Germany. In 1992 he received the position of Artist-in-Residence at the Museu de Arte Contemporanea in Sao Paulo, Brazil. Lundberg is a faculty member at the University of Texas at Austin, where he teaches in the College of Fine Arts. 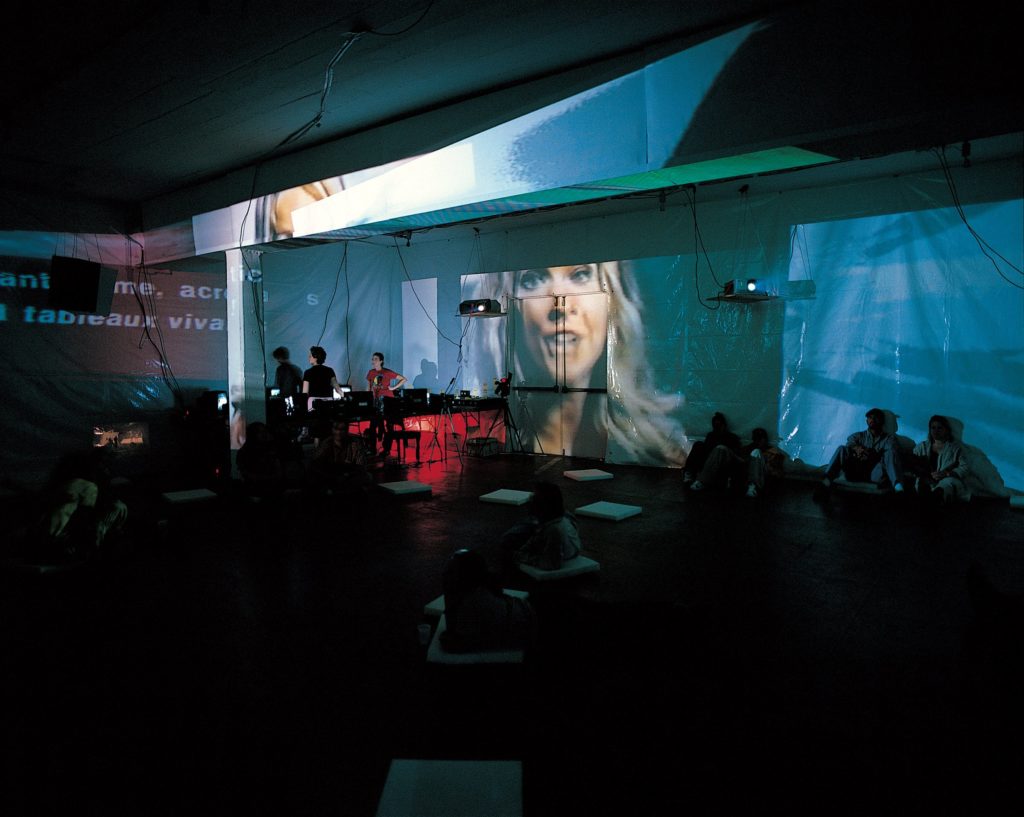 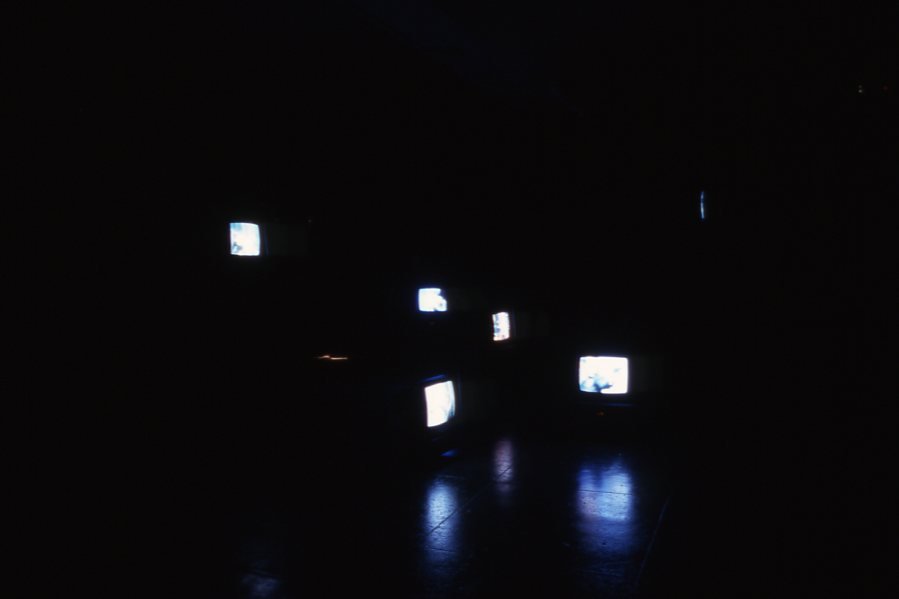