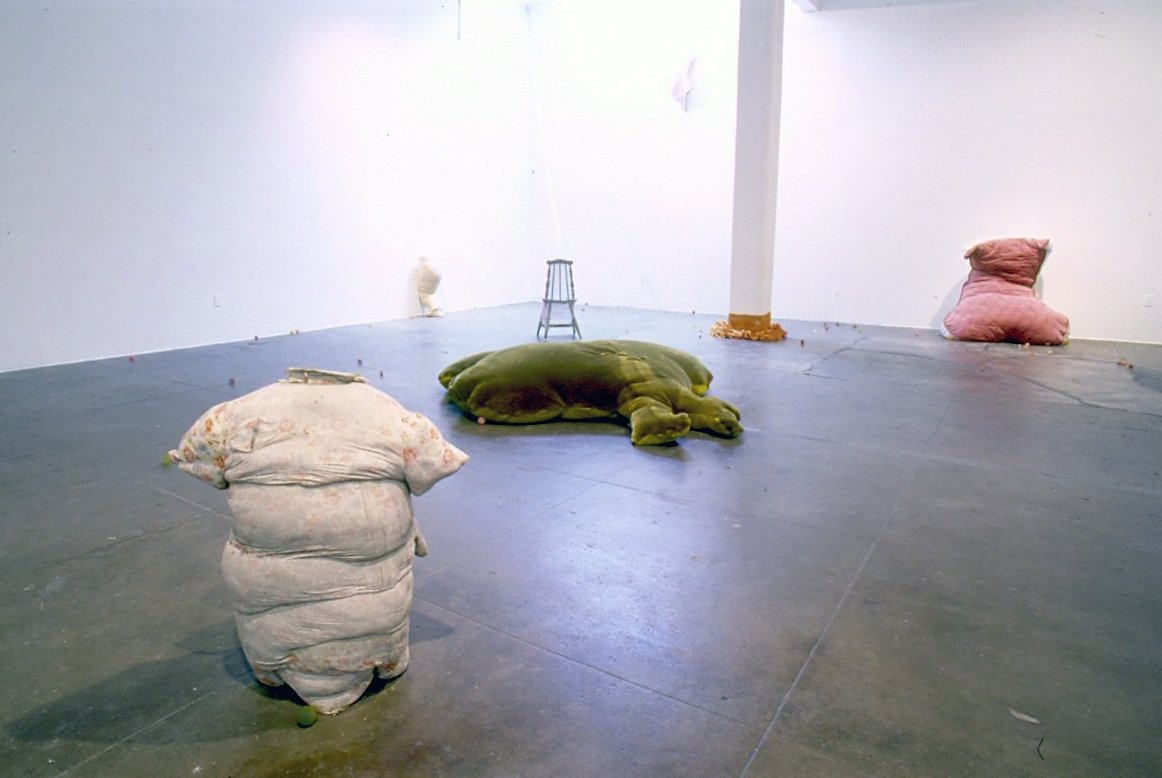 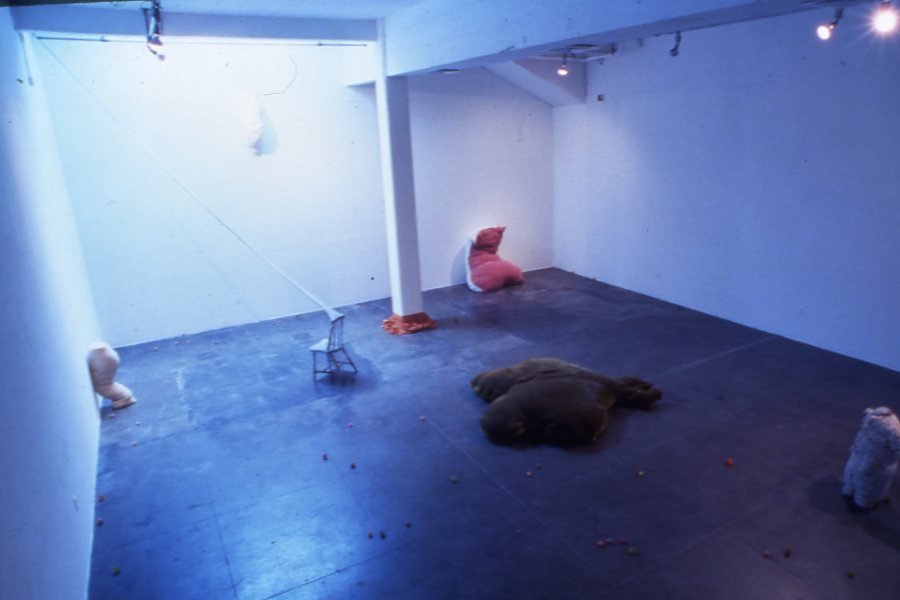 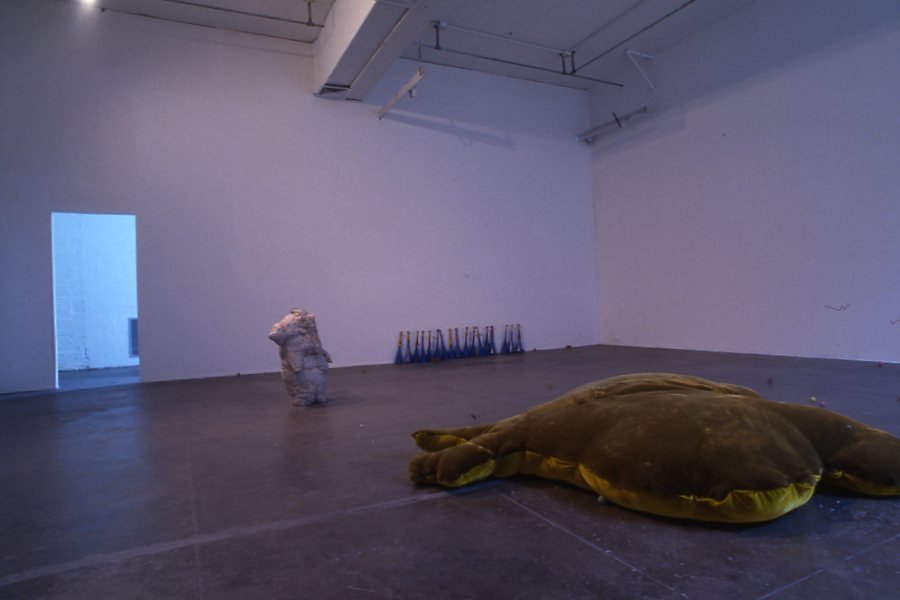 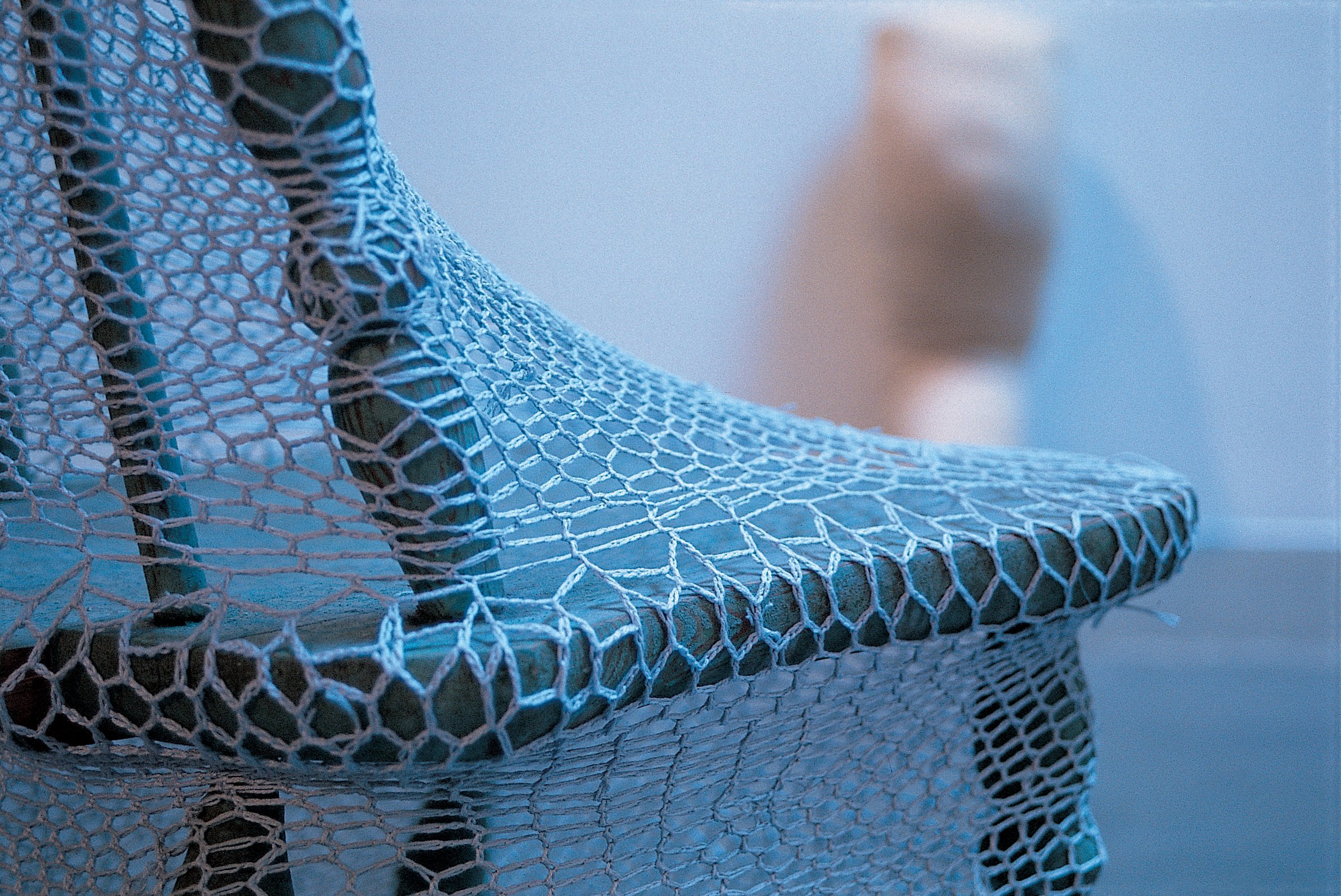 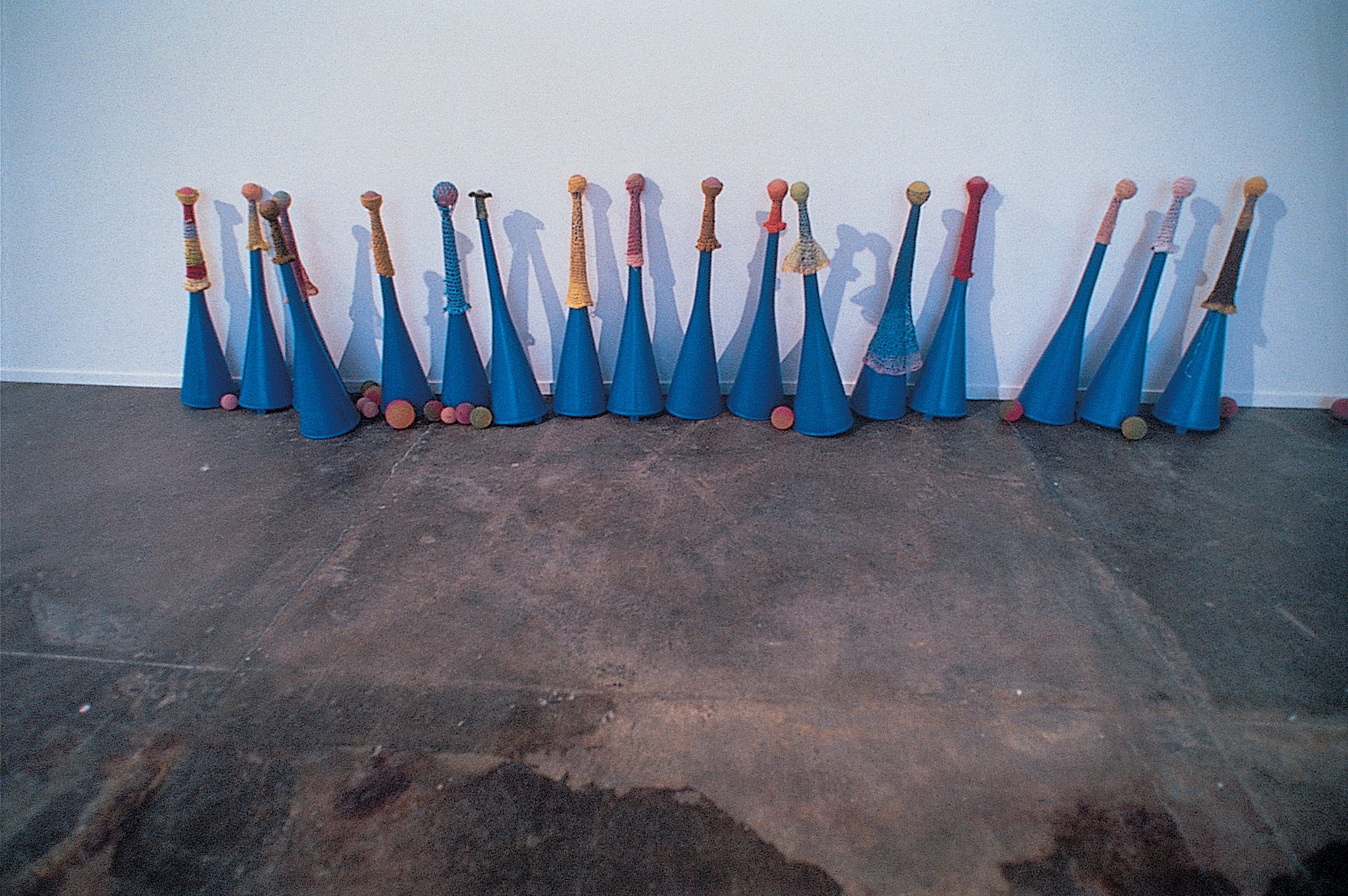 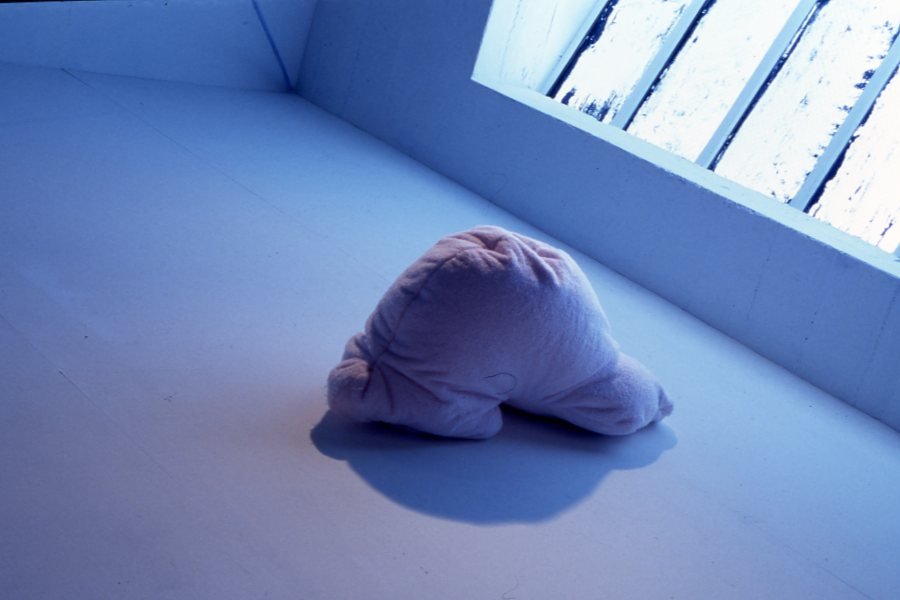 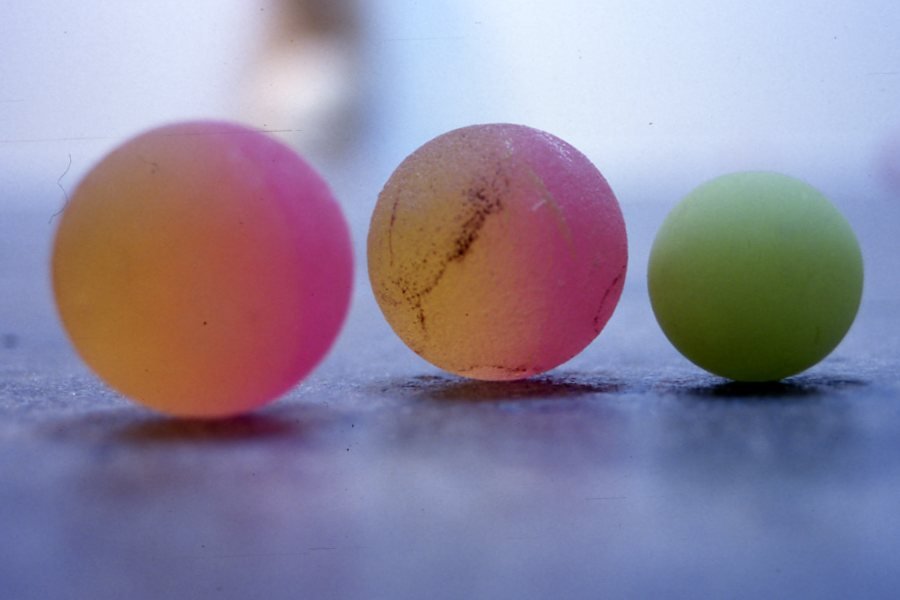 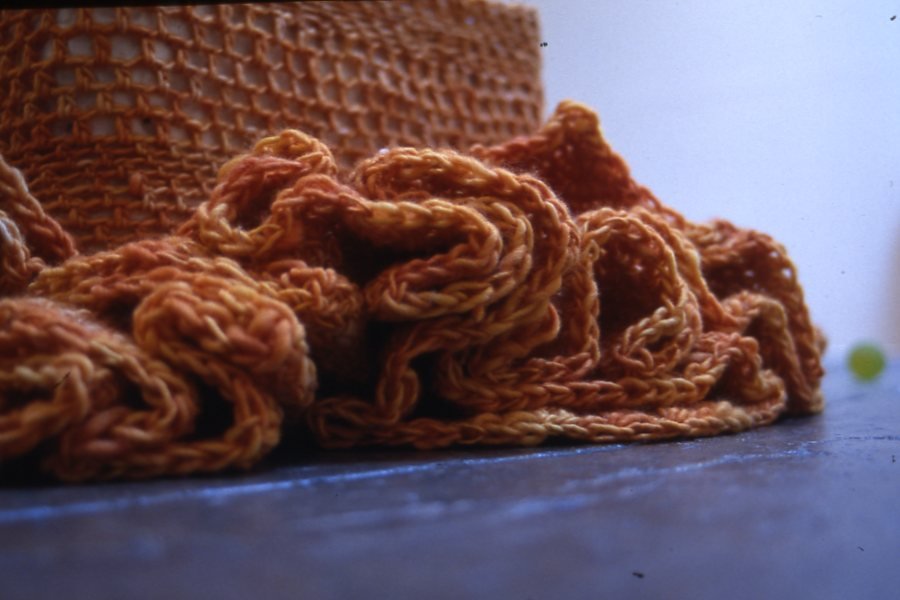 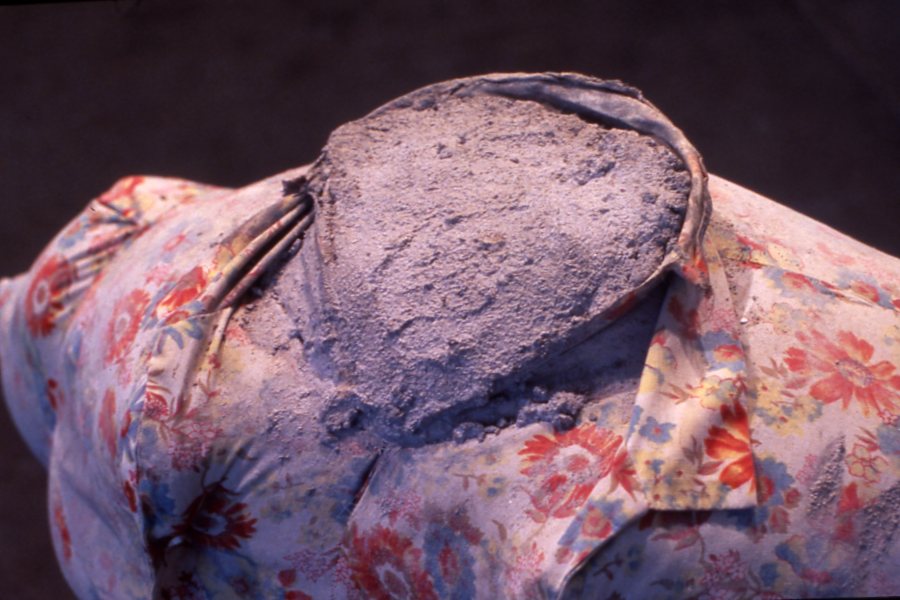 Upon entering a space populated by the works of Elizabeth McGrath, you will notice the near emptiness of the walls. Not the type of elegant economy associated with tastefully placed sculpture, but something more aggressive, more anarchist. Were it not for the artist’s disdain for the category of ‘sculpture,’ you might think this condition to be some sort of revenge for the well-known reproach that sculpture is what you bump into when backing up to look at a painting. But this artist is not out to defend sculpture especially, so you may toss out the revenge element, while still maintaining some of that disdain for the ‘painting’ category, for this work is often placed along the seams, corners, cracks and peripheries of any given space, enlivening that space and foregrounding the lost and lonely aspects of it. McGrath’s mission is to find the areas of in between, and she achieves this with an instinct both informed and mercurial. Her work tends to lounge in a room or in some cases gathers there. None of this is to say that she is sharpening that old saw of art that is about the distinctions between painting and sculpture, but it is worth noting that if you were to stare at these blank walls ordinarily occupied by objects tastefully placed, and if you were to back up further to take in the emptiness, you wouldn’t so much bump into something as fall upon it and once down there you might be tempted to relax and hang out awhile. Comfort, pleasure, idleness, and play are natural responses to the predicament that you, the viewer, are in.

McGrath’s installation at ArtPace in March of 1996, surreptitiously titled please watch your step, will put you in the mood. You might enter tentatively, having been forewarned by the lower case signage, but the laid back tone of the space further sets itself off from you: the room is already in its own groove. The work, at first, seems to have been left more than placed, though the concept of abandonment contains too much intentionality. It is more like the work adjusts itself for comfort after being installed more or less close to where you should go (unless you are already in a comfort zone) in this room full of objects that are already so comfortable with themselves. Maybe you are drawn sideways down the wall to your left by a row of automotive funnels lined up as if for art bowling. These dozen or so Autozone-blue funnels, each placed small end up with a fruit cocktail-colored Superball crocheted to the tip, are arranged in a row on the floor adjacent to the wall. The multicolored silk funnel snuggies, in addition to securing each ball to its funnel, also serve to differentiate each funnel from the next. Superball and crochet together resemble a form of plumage or sprouting such as you would find among the bizarre flora evidenced in Leo Lionni’s book, Parallel Botany. From the dozens of Superballs which litter the floor of the gallery you might conclude, in a moment of gleeful anthropomorphism, that this work is engaged in some kind of pollination. I favor the interpretation that says these Clucks are evidence of play, such as you might experience were you to line a teacup with fur.

Across the gallery, at the point farthest from the entrance, light streams in through a skylight, flooding the three pieces in that corner of the space with drama. A broken chair is both held together and held captive by a blue silk crocheted net which swoops down from a pinpoint of origin in the highest corner of the room. This taut umbilical lattice is straitly diagonal like a Flamenco move and feels mischievous in the way of a comic book shapeshifter. High on the wall to the right of the chair, a large snail-like form made of pink Egyptian cotton terry stuffed with kapok seems to creep toward the skylight resisting gravity by sheer force of slow. A companion piece, Bugs, flanks the chair on the left and leans deterministically into the wall in a bent-kneed slouch. These torso-less hips and legs slump like discarded purpose in the pre-ascension light.

Nearby, a structured pillar is punctuated at the floor with an orange, circular crocheted ruff about one foot high and three feet in diameter. As with other works, it plays a pun on space and placement: a capital at the bottom of a column. A blue and orange flowered housedress filled with concrete follows suit as the negative space of the dress becomes the sculpture. This lady in a housedress, entitled Loaded, seems to have the past overflowing from her pockets. She is present-poor and has a needy look in her staid pose. Her habits of thought and motion are her Medusa. In the center of the room, a large slime-green overstuffed form, vaguely frog-like in shape, seems to be high-centered or breached and invites a lethargic collapse. It bears association with the spirit of artists Jim Woodring and Dr. Suess.

Opening night, people can’t leave the Superballs alone. The bounce everywhere in the room and gather in eddies where the floor is cracked or slightly sunken. A few hide up under the flounce of Ripple. The rotund Slouch is propped against the back wall like a debauched king. Some are tempted to lounge on or with it, or to make finger spirals in the plush viscose fur of Green Pad. It is a beguiling atmosphere in which amused participation is an appropriate response for audience and artists alike.

Elizabeth McGrath, who was based in San Antonio at the time of her Artpace residency, is currently a psychotherapist in Boulder, CO. In her prior career as an artist, she made things that went together as installations. Her work often evoked associations with domestic materials and experiences, including the work she created during her Artpace residency in 1996.
McGrath graduated from Austin College, received her MFA at the University of Texas at San Antonio and went on to earn a MA in Transpersonal Counseling from Naropa University in Boulder, Colorado.
In 1994 she was selected by a regional panel of arts professionals who convened at Artpace to participate in the Foundation’s London Studio program in April 1995, for which she spent six weeks in England. The same year she also received a Mid-American Arts Alliance/NEA Fellowship Award in sculpture.
She moved to New York City in 1998, entered in psychoanalysis, and eventually decided to pursue a different profession. She currently practices as a registered psychotherapist in Boulder, where she works with individuals, couples and specializes in facilitating psychotherapy groups.
Image courtesy of the artist. 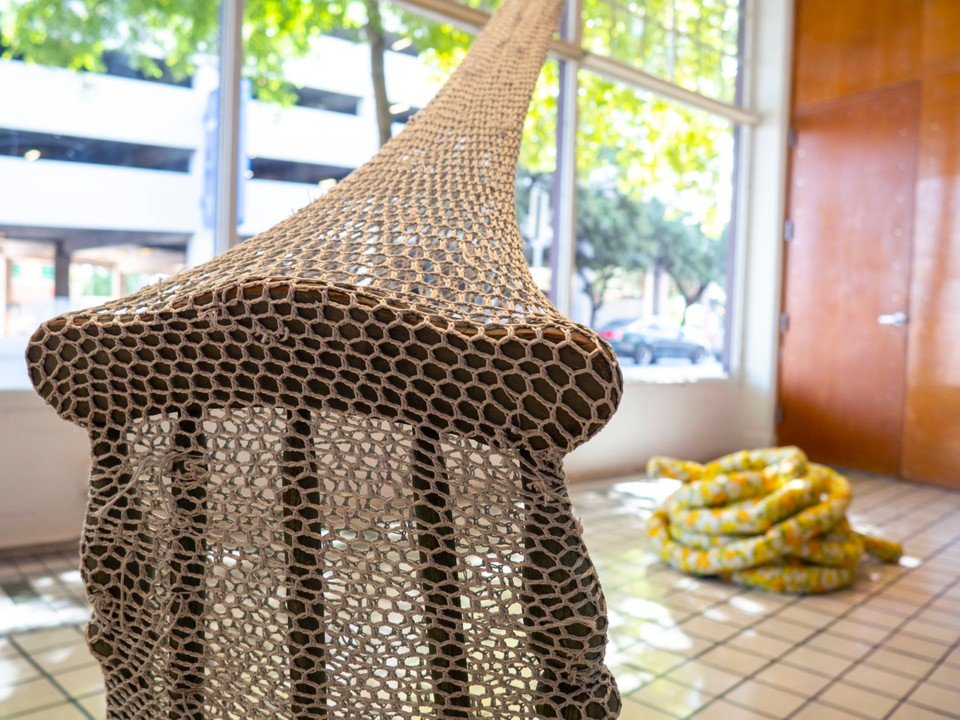 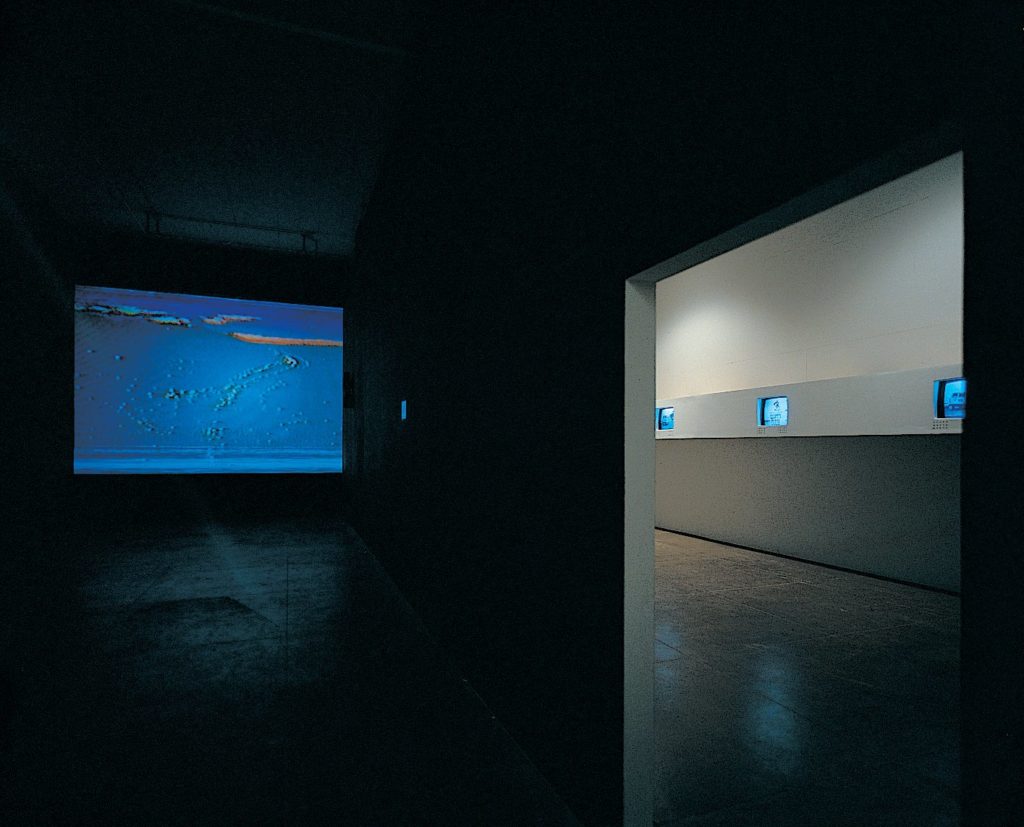 Trajectory: How Am I Driving? 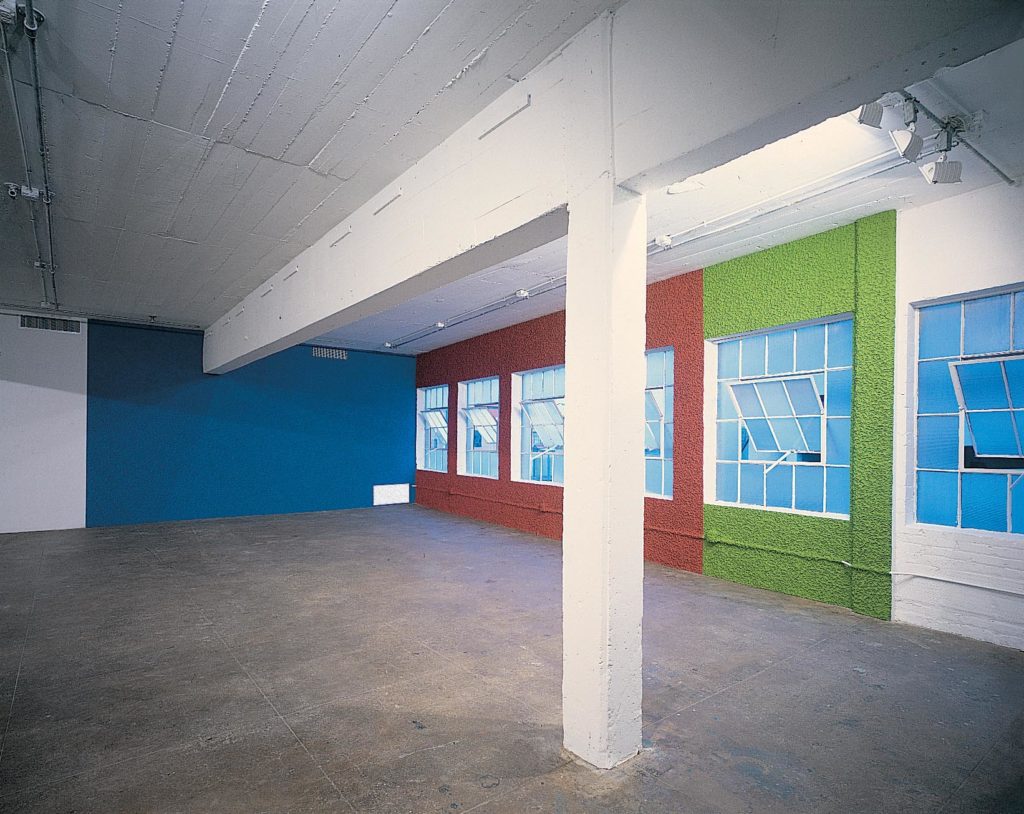