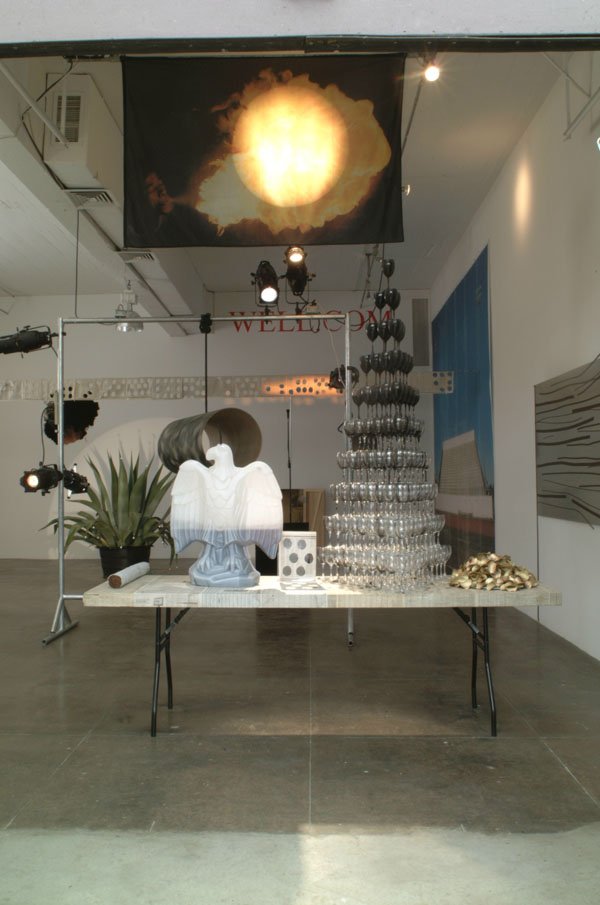 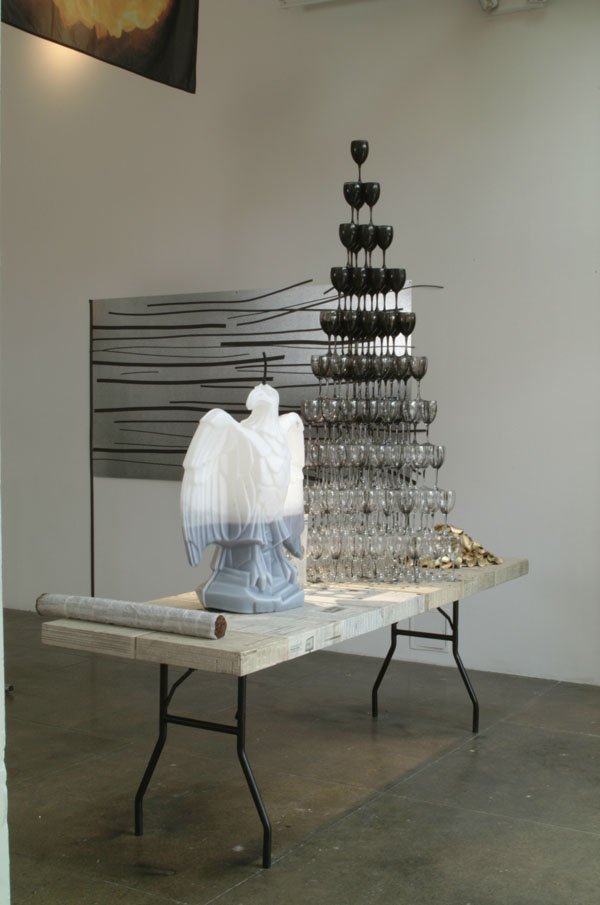 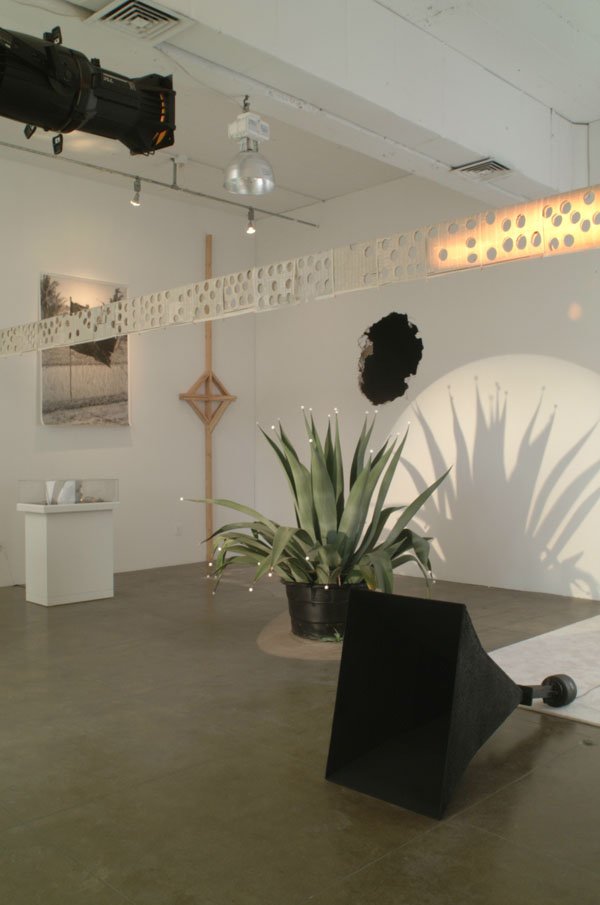 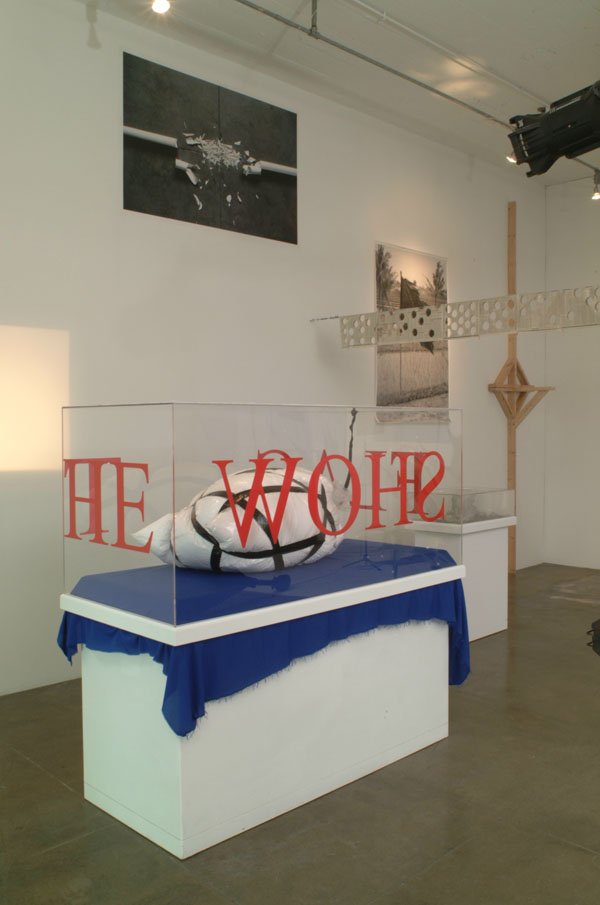 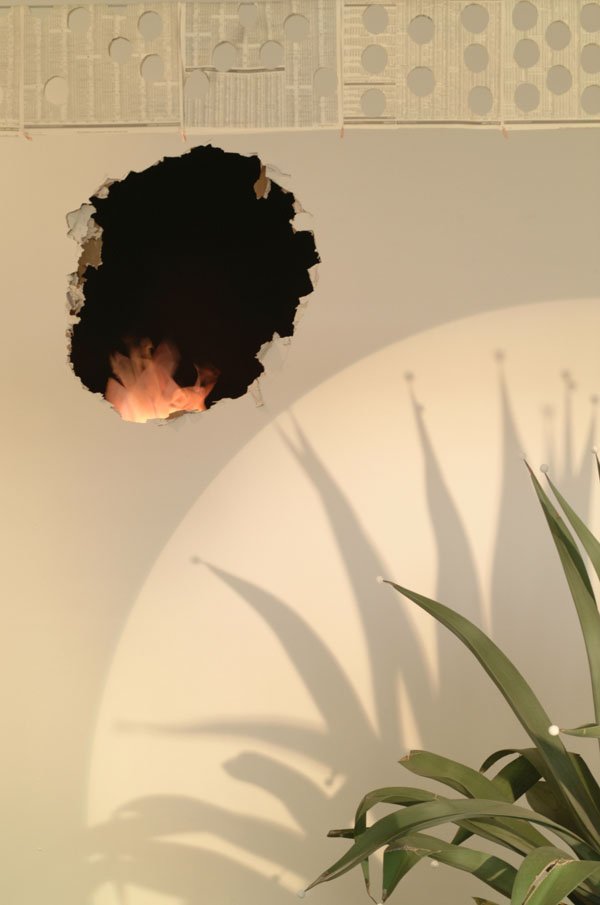 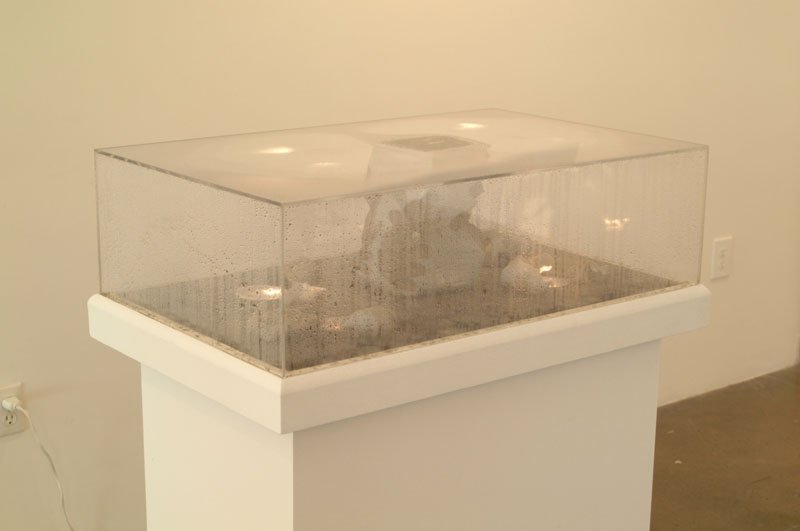 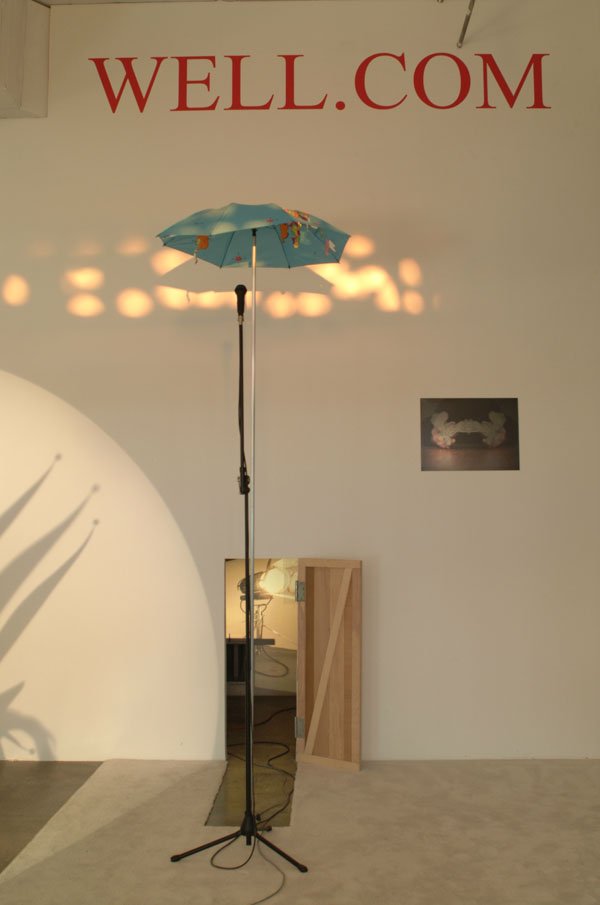 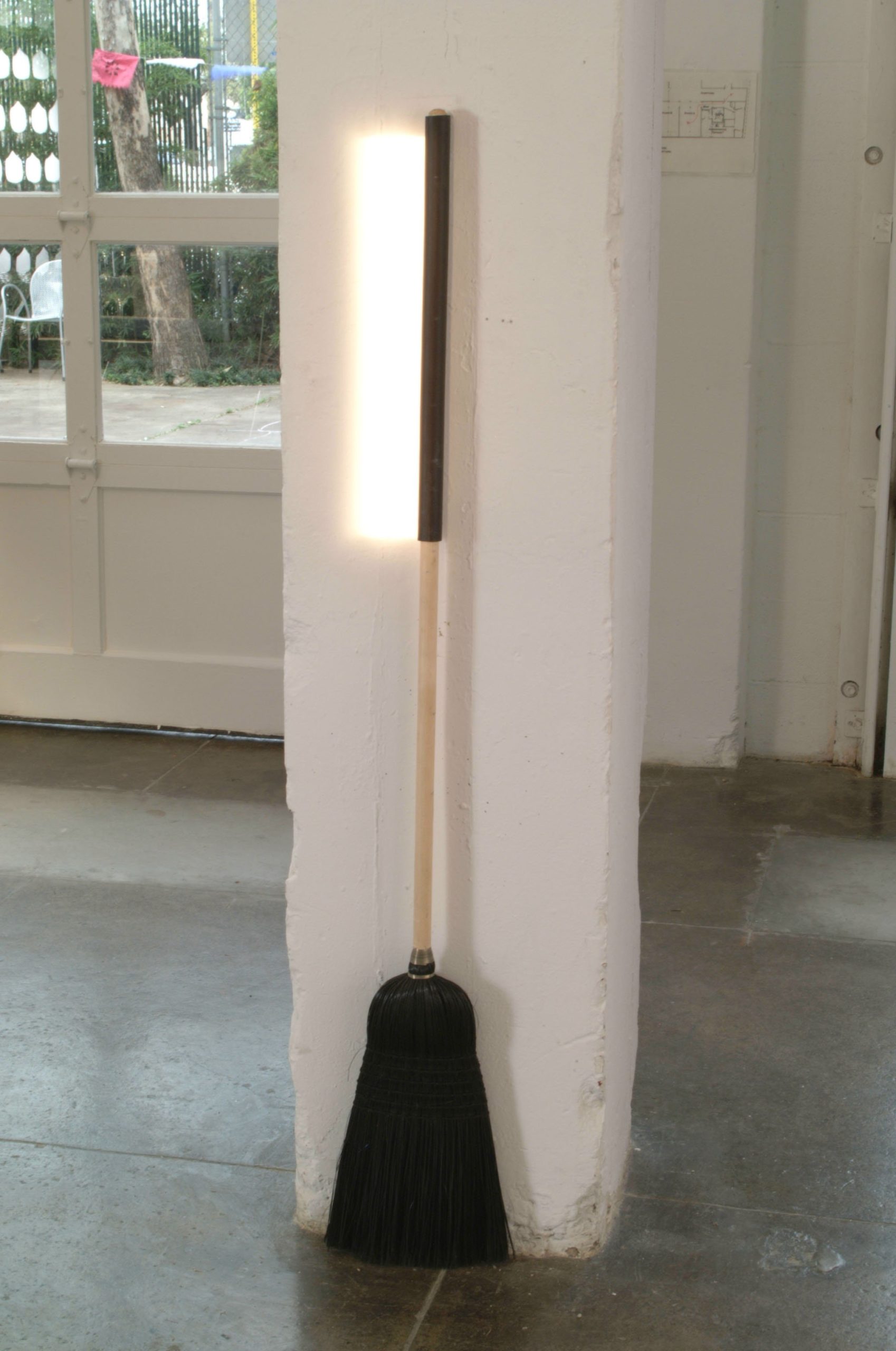 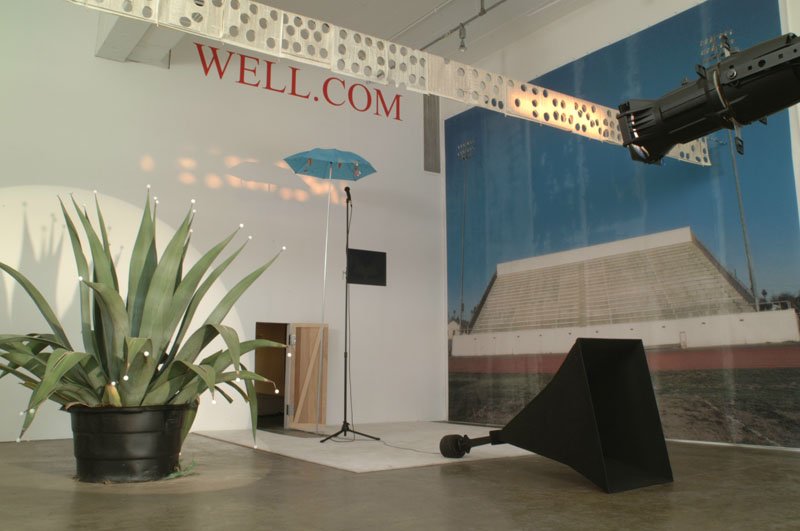 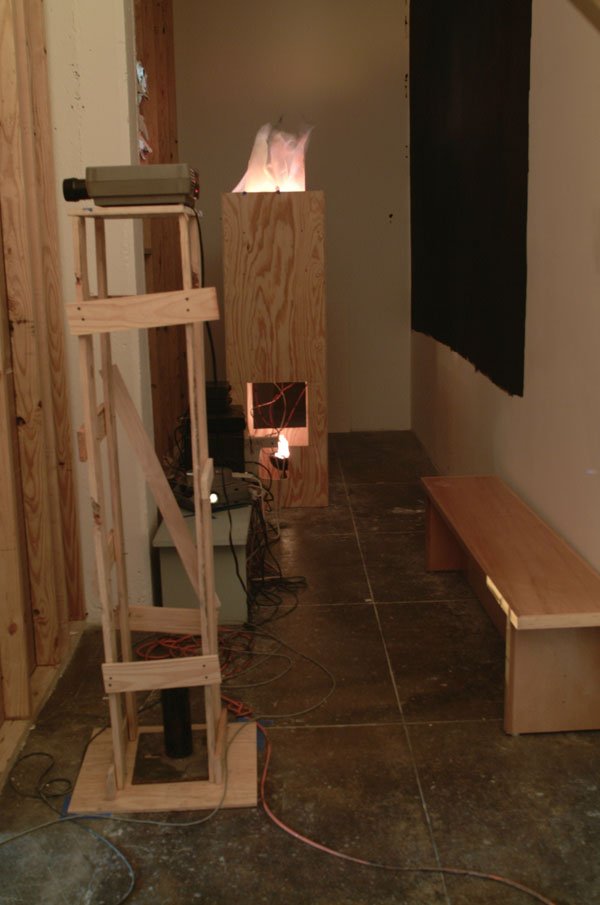 François obscures the initial view of the gallery with a screen that flutters with a whirring fan. Beyond the screen is a table set for a reception. A pyramid of glasses lies in wait, but instead of wine ink spills from the top, staining a tablecloth fashioned from the daily stock exchange listings. The decanter, since removed, was a plastic eagle, which also served used as an ice mold to form a frozen black eagle that melted away.

Behind the reception table a metal armature anchors theater lights that cast a circus of shadows, including some on a “stage” at the back of the room. The wall here has been explosively perforated, and beyond it a fire appears to smolder. The area is spot lit and decorated with a giant agave plant. In front of a miniature door sits a microphone, poised as if awaiting public address; yet an oversized speaker emits the sounds of frogs rather than the head of state one expects. Again confounding expectations, the doorway reveals nothing but a projection of a backstage—its bare wood contrasting with white walls to compound the sense that all is artifice.

The theater of politics is expressed by other elements in the space. There is an enormous photograph of an empty stadium and one of a tattered flag. A metal sheet lined with magnetic strips becomes an abstracted flag, and François sculpts another out of a long tube of popcorn and a rectangle of light cast on the wall. Nearby a plastic bag, stuffed with white styrofoam and bound with black tape, sits on a blue cloth inside a vitrine covered with red text reading THE FLAG SHOW. With its empirical red, white, and blue, the object suggests yet another reference to patriotism.

With Théâtre des Opérations Michel François has sculpted a multifaceted project that suggests that theater is a thread binding together politics, performance, artmaking, and ultimately the act of viewing art. 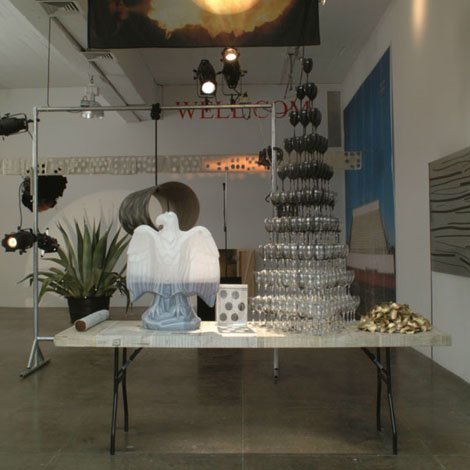 Through videos, photographs, books, and installations Michel François breathes new life into materials and spaces, as well as the act of creating and looking at art. François transforms otherwise static, white galleries into theatrical settings where holes appear in unexpected places and everyday items, purchased or scavenged, are poignantly juxtaposed.
François’ installations creep around doorways and through walls, mirroring the idea of the rhizome—a non-hierarchical, fluid way of operating theorized by Gilles Deleuze and Felix Guattari. As opposed to a vertical structure, such as a tree, a rhizome spreads laterally and diffusely, like a nettle. It has no top, no center, no culminating point. A rhizomatic structure is a series of interconnected nodes, and while some may be larger than others, none is ultimately most important. Like a rhizome, the distinct parts of François’ installations ebb and flow, receding and advancing to create entities that are in flux but nonetheless recognizable.
Revitalizing the familiar, François investigates the tension between public and private, and art and non-art. Stage lights, newspapers, plants, and tobacco reappear in various installations—at times becoming more or less important. For The Plant in Ourselves (2001) François pried into the history of a Nazi-era museum by exposing original marble and old walls. Lights shone on original details. A stately cactus brought organic matter into the art space. Visitors were given clay with which to mark up a room. In this installation, as in others, François refashioned the ordinary into the extraordinary. His amorphous, sculptural creation wavered between clarity and mystery—between explicit politics and beautification of the space.
Born and based in Brussels, Belgium in 1956, Michel François spends time in Amsterdam, the Netherlands, where he teaches at the Rijksakademie. Recent solo exhibitions include the Westfälischer Kunstverein, Munich, Germany (2003); the Centre George Pompidou, Paris, France (2002); the Fundació Miró, Barcelona, Spain (2001); the Haus der Kunst, Munich, Germany (2001); the Kunstahalle Bern, Bern, Switzerland (2000), and the 48th Venice Biennale, Italy (1999).

Lawrence Rinder is the Curator of Contemporary Art at the Whitney Museum of American Art, and was Chief Curator of the 2002 Whitney Biennial which was not restricted by a single theme, and aimed to expose multiple, sometimes conflicting currents, as well as extraordinary works that fall outside of any conventional aesthetic definition. Another recent exhibition, BitStreams (2001), co-curated with Debra Singer, presented projects that harness digital media to achieve new dimensions of artistic expression through the transformation of images, space, data, and sound.
Prior to joining the Whitney in 2000 Rinder was founding director of the California College of Arts and Crafts Institute; Curator for Twentieth-Century Art at the University Art Museum and the Pacific Film Archive, UC Berkeley, and Curator of the Matrix program, UC Berkeley.
In addition to his many exhibition catalogues, Rinder’s writings have been included in books such as Theresa Hak Kyung Cha, (University of California Press, 2001), and Beyond Conceptualism: The Sixties Experiment (ICI, New York, 2000).  His art criticism has been published in numerous national and international periodicals including Shift, Flash Art, and Artforum. 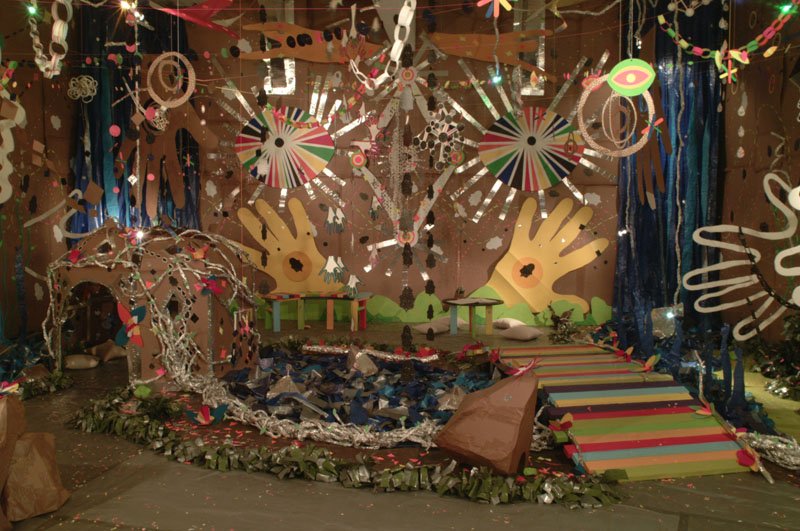 the ü in the i 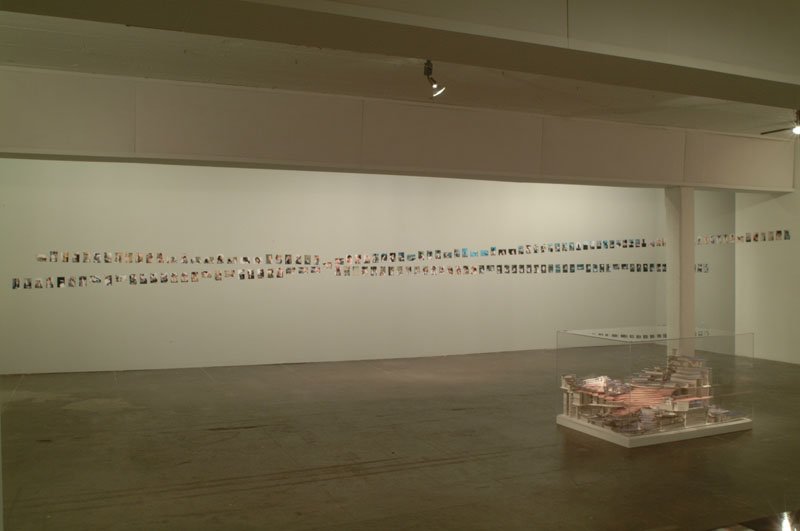