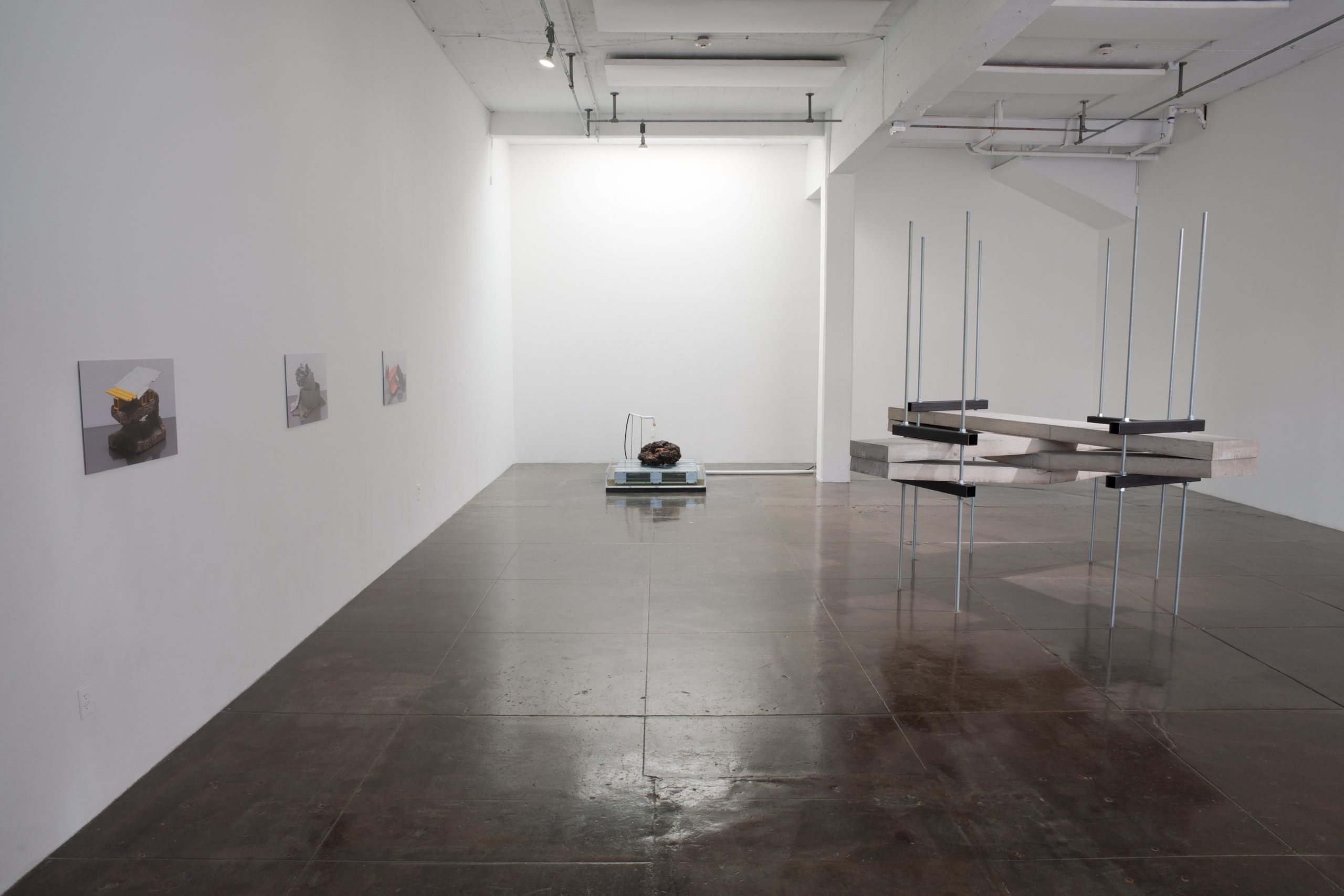 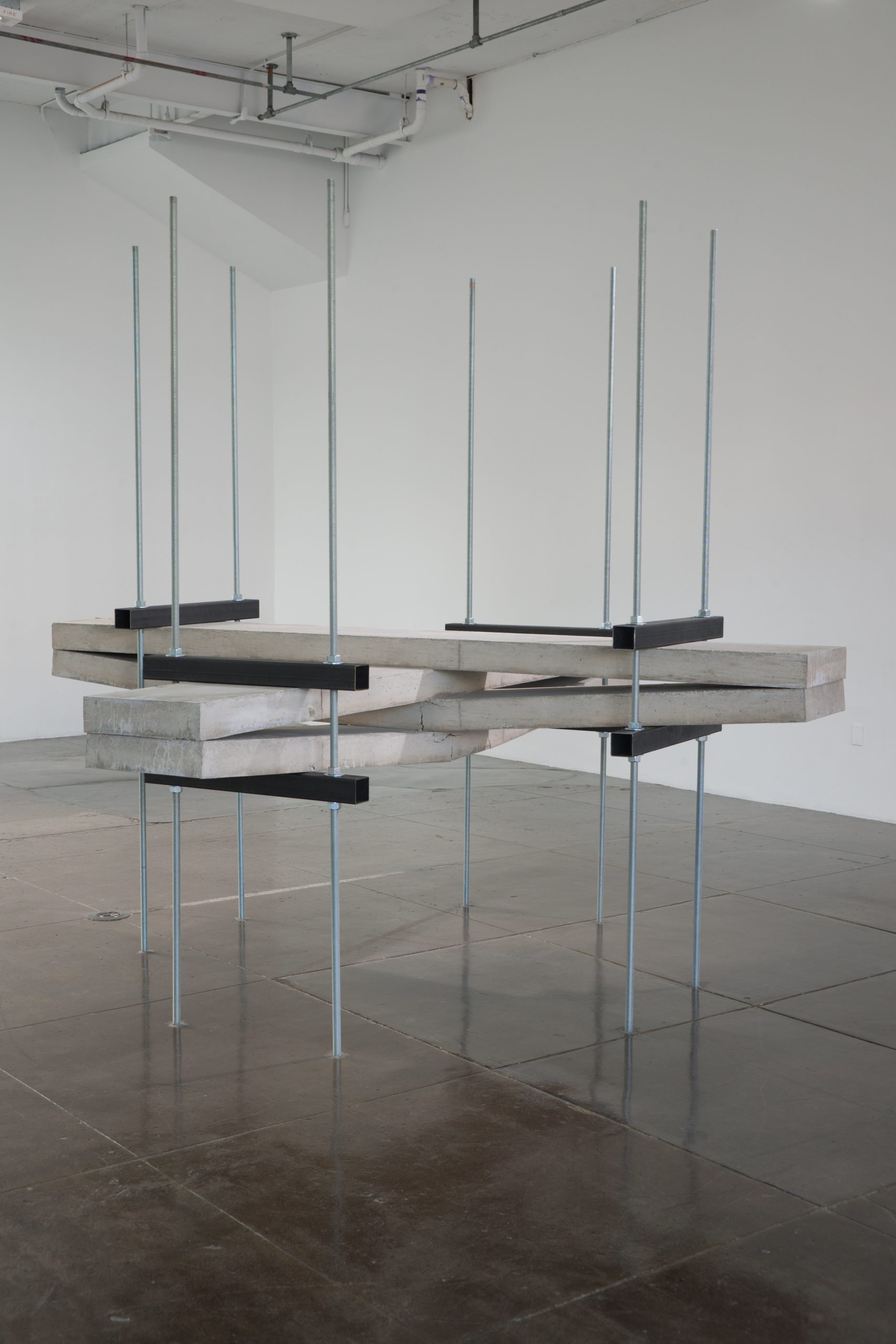 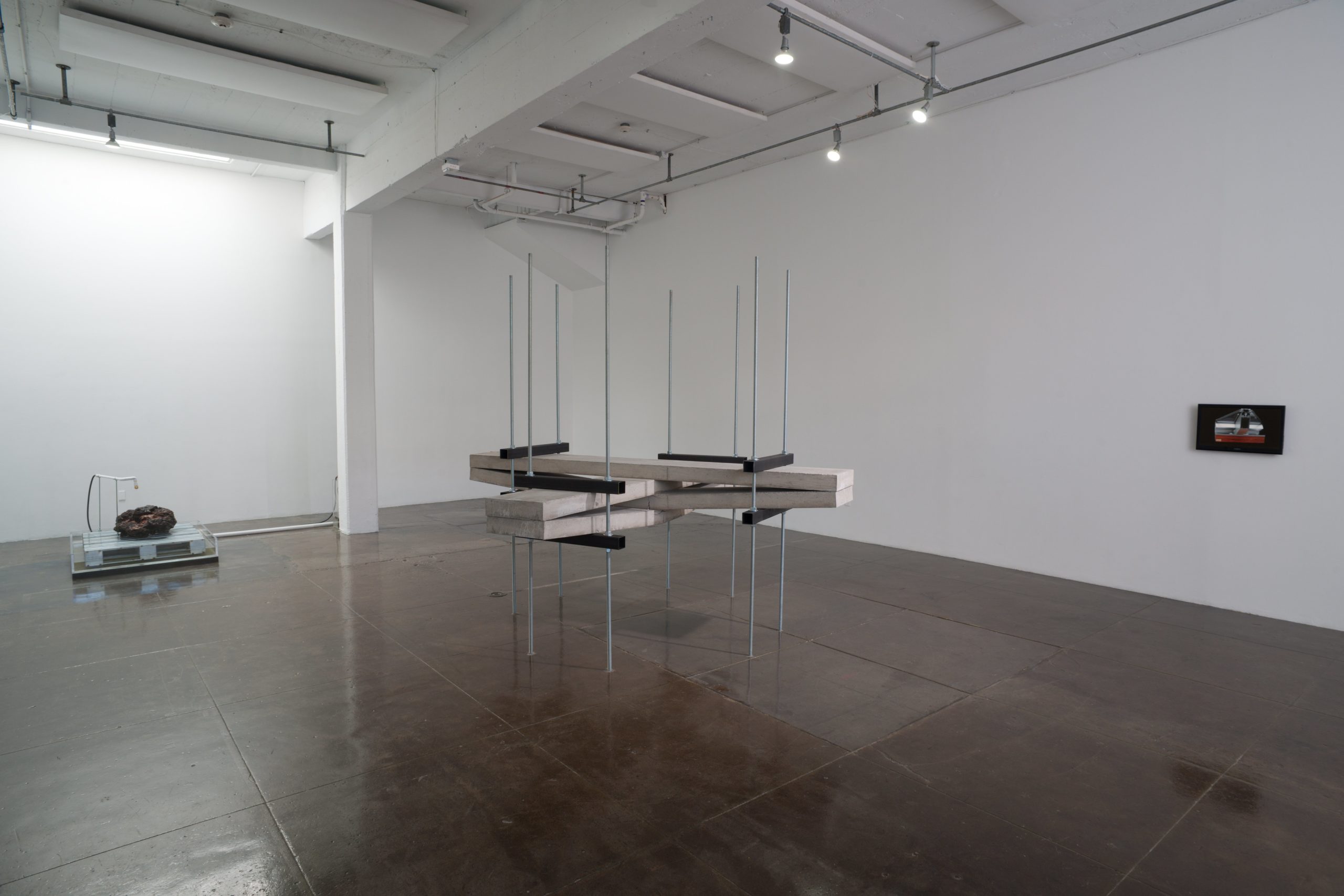 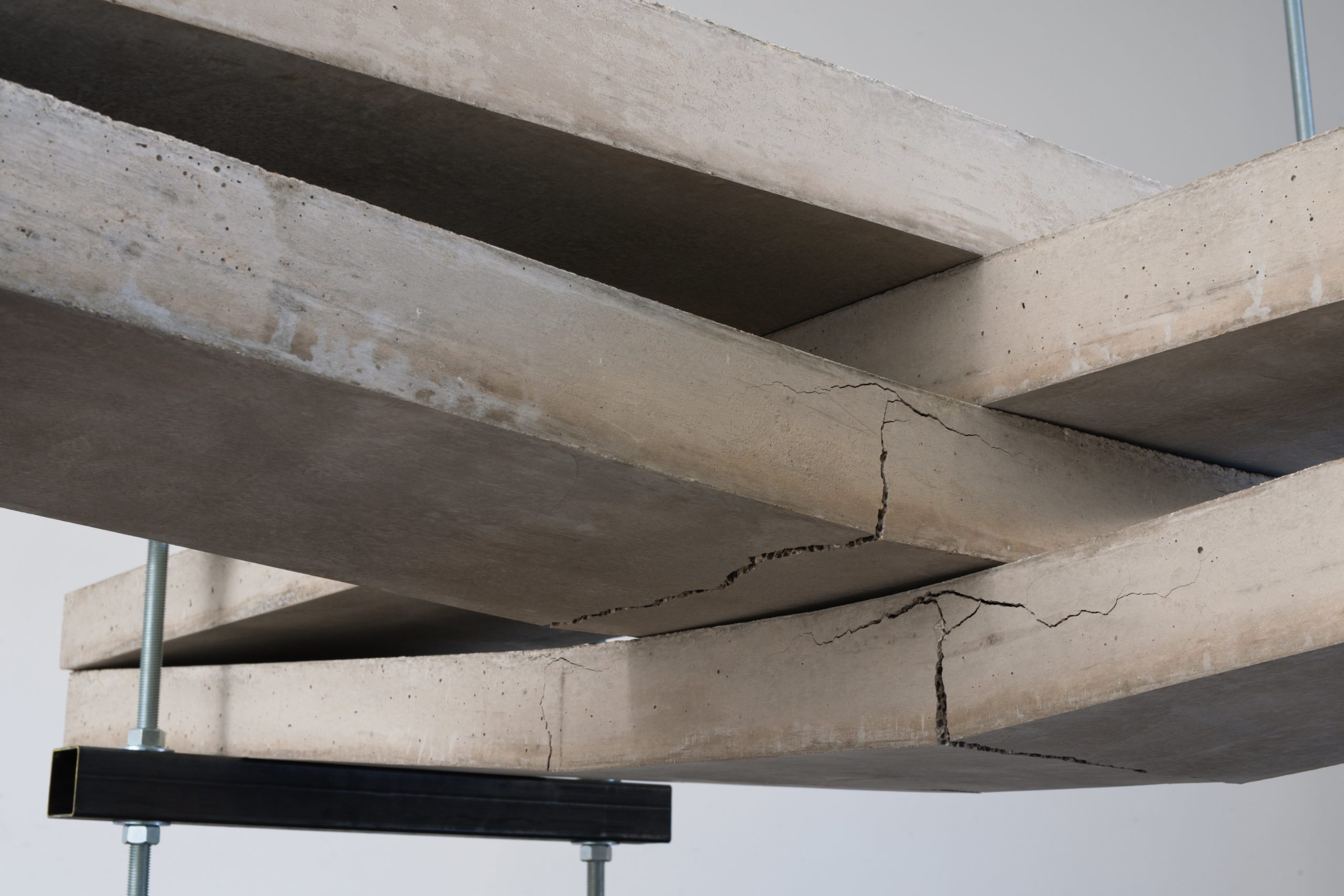 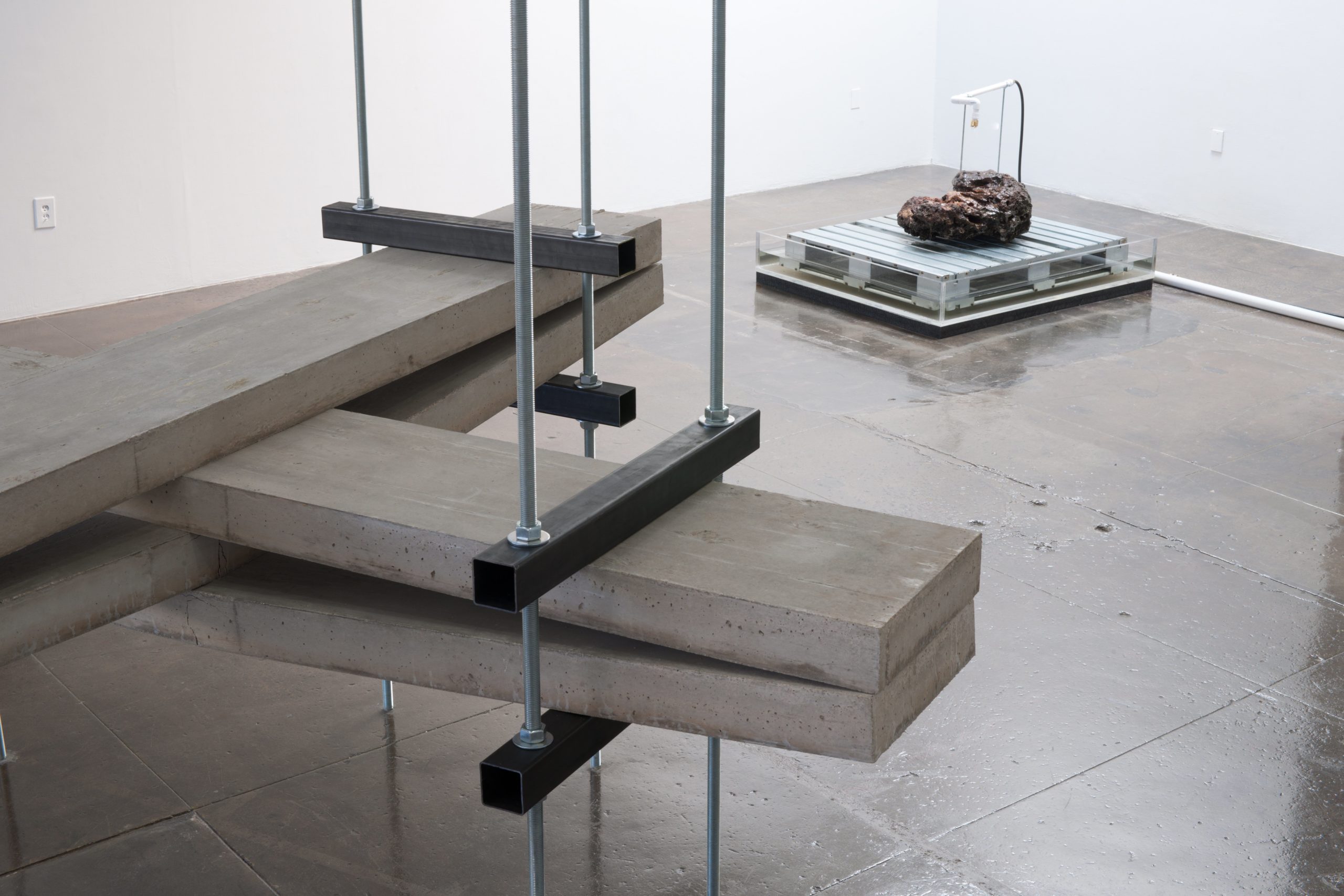 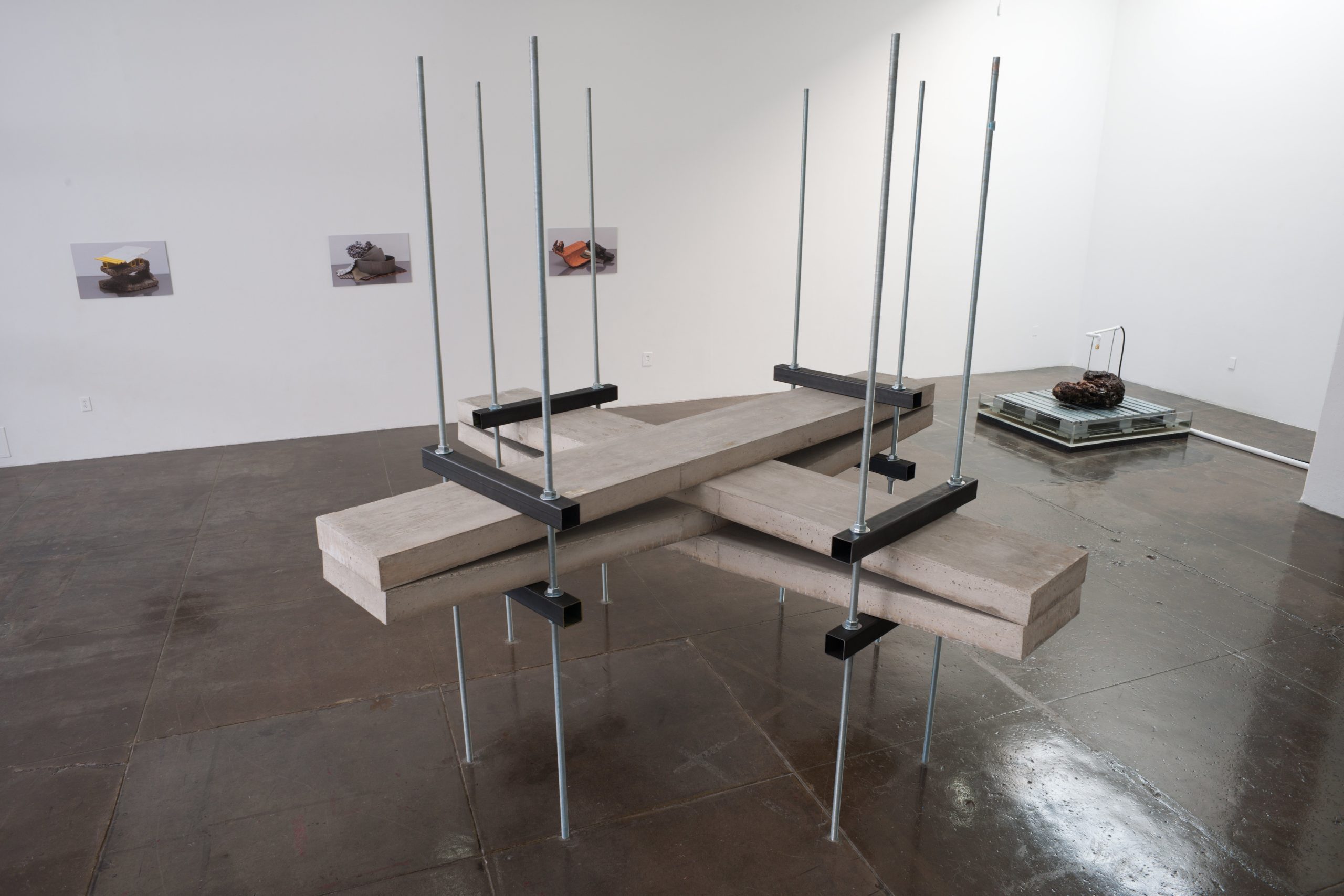 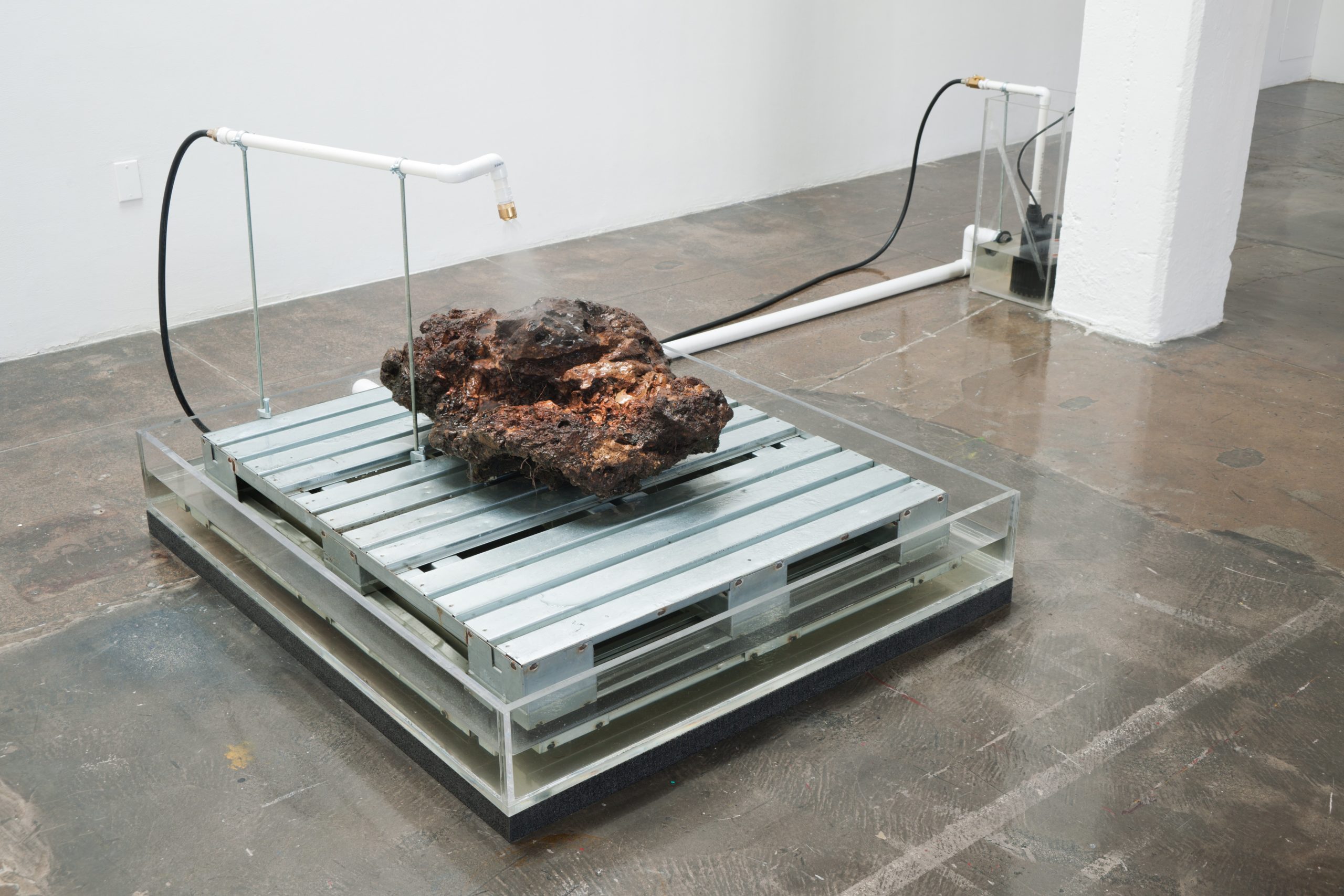 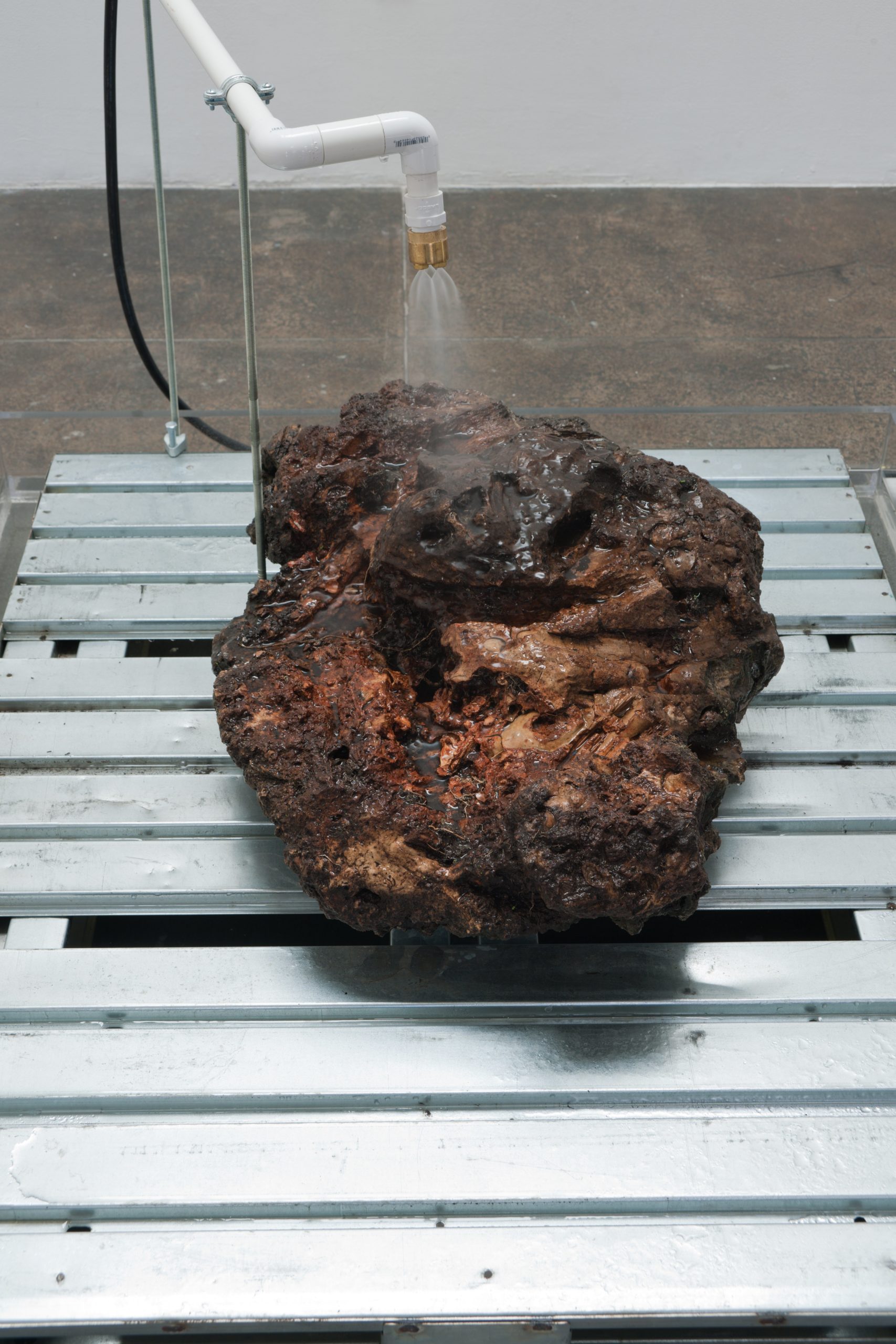 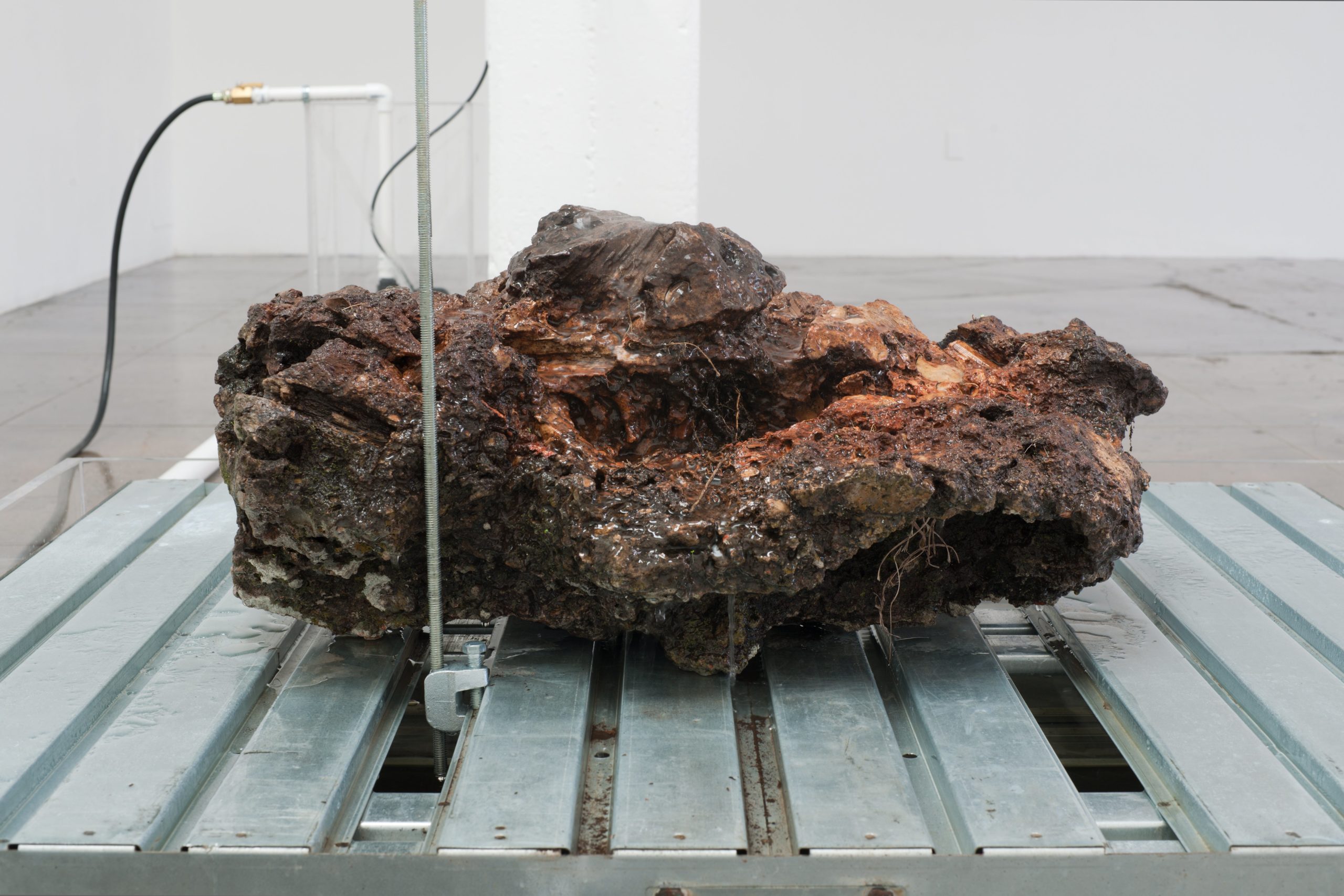 Jeff Williams presents several proposals for a new kind of architecture in There is Not Anything Which Returns to Nothing. These plans, composed of a video, three photographs, and two sculptures, break down the formal complexities of built structures into their simplest arrangements and most basic materials. His experimental juxtapositions of form and matter rearrange these elements to test their structural and aesthetic limits.

Facing the gallery’s entrance, a flat-screen television showcases a rotating image of a computer-generated object: a cross-section of a mock-up installation of a skylight, the likes of which a construction materials vendor might use in a sales pitch. As the skylight turns on screen, its falseness is revealed. We see the hollow core of its aluminum body, the foam insulation filling its interior, and the flimsy aluminum covering its wooden base. Although it already resembles an abstract sculpture more than an architectural form, Williams renders it even more useless by converting it from a real, three-dimensional object into a digital image. A humorous irony arises: a thing that is functionally inept but meant to represent a perfected form is venerated, perpetually rotating in its television display.

Three high-resolution photographs hung on the opposite wall develop this twisted logic and expand it to introduce novel combinations of materials. Here, Williams offers structural arrangements that are as unlikely as they are impractical. The least complex is a roughly hewn chunk of cinderblock resting on shiny, polished steel. On top of the block are perched a few sections of rectangular plastic piping and a small square of form liner, a plastic mold used to create the faux texture of stone on the surface of poured concrete. The smooth sides, sharp edges, and bright yellow hue of the piping contrast starkly with the coarseness of the cinderblock. Although all of the materials are new, their combination suggests a spatialized history of architecture, in which the bizarre forms of contemporary buildings rest, literally and theoretically, upon the remnants of older structures.

A second photograph combines even more materials, marrying metallic forms with a slab of translucent silicone splayed over a clay tile glazed in glossy black. Coarse aluminum foam and a sheet of silver ceramic bathroom tile seem to erupt from a tower of spooled metal sheets. Color unites the objects of this grouping while texture differentiates them. The third photograph combines the most disparate materials and achieves the most peculiar arrangement. A clay roofing tile, faintly imprinted with its brand name, stands on end, supported by silicone, mortar-smeared concrete, welded steel, and dark obsidian. The hardness and blackened shine of the steel and the obsidian resonate, but the rubbery green silicone contrasts sharply with the rugged red surface of the tile. A lump of mineral material perched on the other end of the tile further enhances this dynamic tension between the natural and the man-made.

A large chunk of this same mysterious rock appears in the nearby sculpture, Conservation Fountain (Cibolo Creek Fossil). Here, the hard, earthy material rests upon a steel palette immersed in a water-filled Plexiglas basin. A pump draws water from the basin and forces it through a mister aimed at the rock, which is actually fossilized plant matter excavated from the Hill Country north of San Antonio-where millennia ago, tide pools were a regular part of the landscape. The contrast between the geometric and structural rigidity of the man-made steel palette and the misshapenness of the naturally formed petrified rock reminds the viewer of the composite forms in Williams’s photographs. This time, however, the materials are not frozen in an ideal state. Quite to the contrary, the constant flow of water simulates and accelerates the conditions of natural erosion. Over the course of the exhibition, the fossil gradually dissolves into the tank and into the water that cycles through the fountain. Ironically, he has derived this process from conservation methods meant to clean artifacts gently and with minimal damage. In this sculpture, however, the mist fountain will do exactly the opposite, destroying the fossil and rusting its steel foundation.

Tension and Compression (Evans Rd. Quarry/Alamo Cement Co.) is a massive, unstable structure in the center of the gallery. Four pairs of threaded steel rods plunge through the floor and anchor the support structure suspending a stack of four concrete slabs. As an architectural model, the sculpture is deeply and obviously flawed. Over the course of the exhibition, the concrete will crack and crumble under its own weight, although steel reinforcements inside the slabs will prevent its total collapse. What it lacks in integrity, the structure gains in the naked truth of Williams’s architectural proposals: No structure, no material, no matter how advanced, will endure forever. 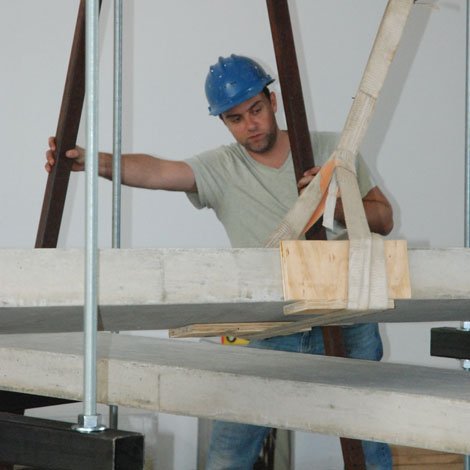 Jeff Williams’s site-specific sculptural works involve intervening in a structure’s architecture to reveal the layers of a building’s history of habitation. His practice incorporates a variety of approaches, including sealing voids, compressing spaces, and opening and constructing walls. Often he uses natural phenomena such as air, light, water, and gravity to create poetic gestures that serve to connect the present with the past. In Sunlight/Substratum (2009), he redirected sunlight using mirrors through subterranean passages in the oldest building of the American Academy in Rome, Italy, where Galileo briefly worked. The piece was only viewable during a few minutes each day, when the sun was in position, thus contrasting centuries of the building’s existence with the fleeting moments of light.
Williams was born in Cambridge, Massachusetts, in 1976. He received his MFA from Syracuse University in New York in 2002, and his BFA from Columbus College of Art and Design in Ohio in 1998. He was a Visual Arts Fellow at the American Academy in Rome from 2008 to 2009, and an artist-in-residence in the Core Program at the Glassell School of Art of the Museum of Fine Arts Houston from 2006 to 2008. Recent solo exhibitions include Worn Thin, Recess Activities Inc., New York, New York (2011); There is Not Anything That Returns To Nothing, Grizzly Grizzly, Philadelphia, Pennsylvania (2011); Underlying Structures, Galeria Perdida, Chilchota, Michoacan, Mexico (2010); Dust Storm, Silicon Labs Inc., Cook and Ruud, Austin, Texas (2010); Sunlight/Substratum, American Academy in Rome (2009); Row House, Round 28, Project Row Houses, Houston (2008); and Thickly Settled, Okay Mountain, Austin (2007). His most recent group exhibitions throughout 2011 include Heat Island, Smack Mellon, Brooklyn, New York; Festival of Ideas for a New City, New York; Black Sunday, Saint Cecilia’s Convent, Brooklyn; and Synthetic Supports: Plastic Is the New Paper, Museum of Fine Arts Houston. 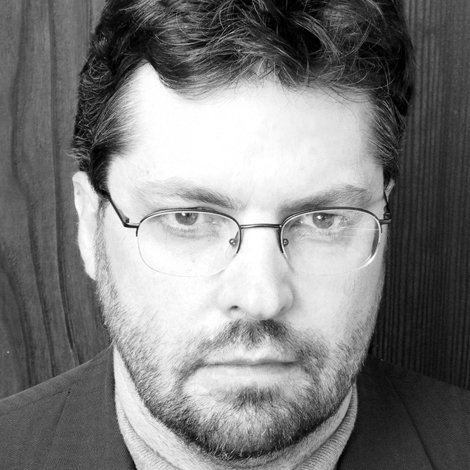 Russell Ferguson assumed his current position as Chair of the Department of Art at the University of California, Los Angeles (UCLA) in 2007. Prior to this appointment, Ferguson held the positions of Director of Exhibitions and Programs and Chief Curator at the Hammer Museum in Los Angeles, and continues to serve as adjunct curator there. Between 1991 and 2001, Ferguson was the Editor, then Associate Curator at the Museum of Contemporary Art in Los Angeles. He has curated numerous exhibitions, including The Undiscovered Country (2004), and solo exhibitions by Larry Johnson (2009); Francis Alÿs (2007); Wolfgang Tillmans (2006); Patty Chang (2005); and Christian Marclay (2003). At the Museum of Contemporary Art, he curated In Memory of My Feelings: Frank O’Hara and American Art (1999), as well as survey exhibitions of the work of Liz Larner and Douglas Gordon (both 2001). With Kerry Brougher, he organized Open City: Street Photographs Since 1950 (2001) for The Museum of Modern Art in Oxford. Additionally, Ferguson is the editor of Discourses: Conversations in Postmodern Art and Culture, and Out There: Marginalization and Contemporary Cultures, both published by MIT Press.
Photo by James Welling 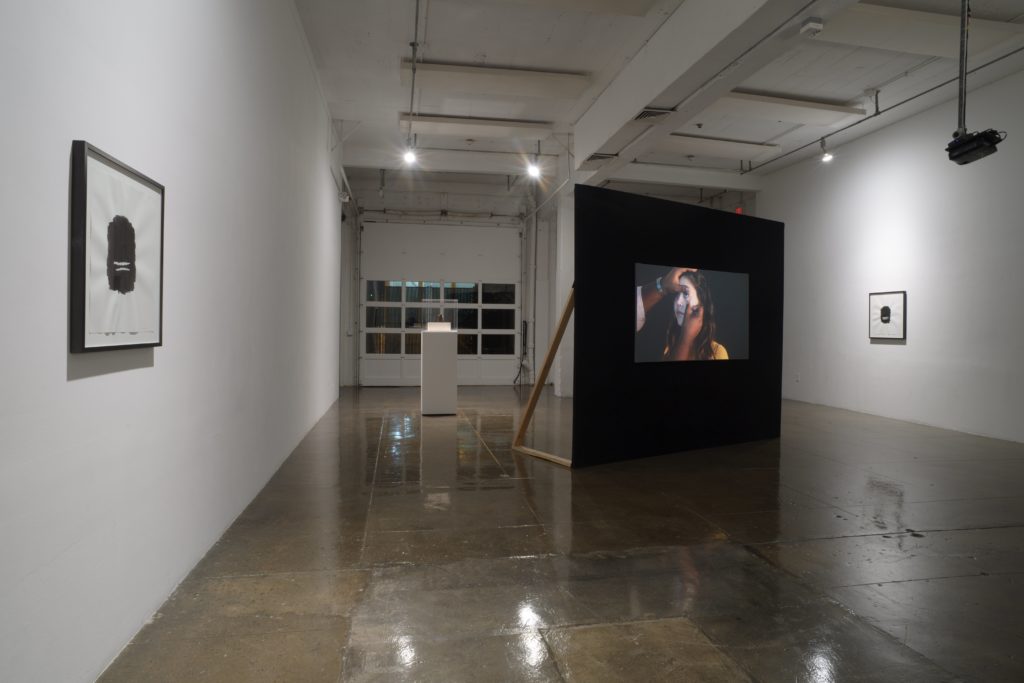 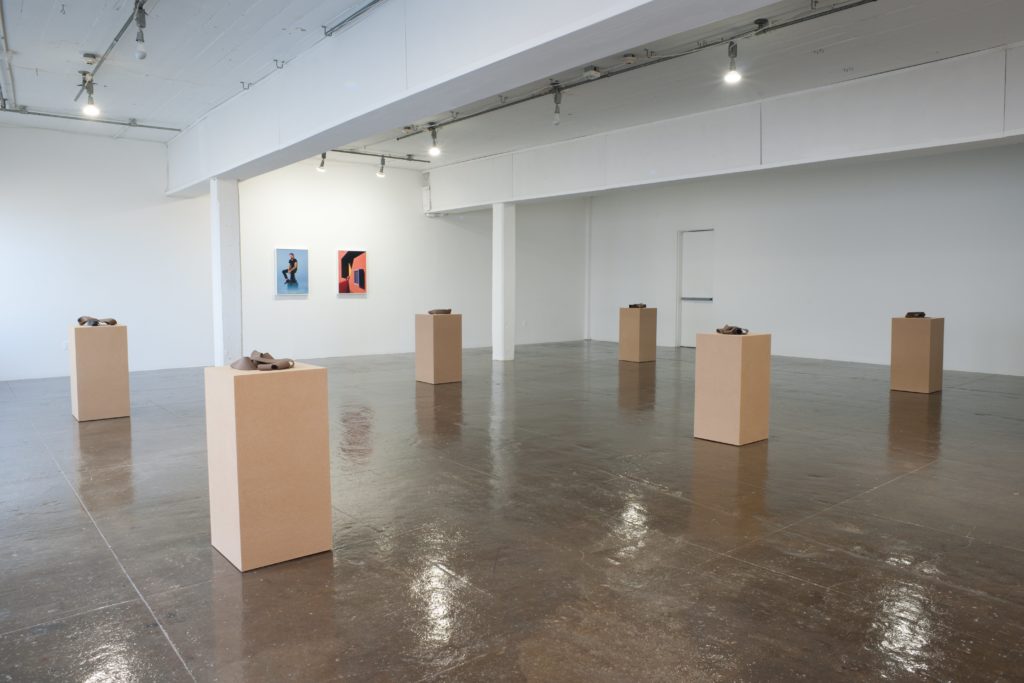