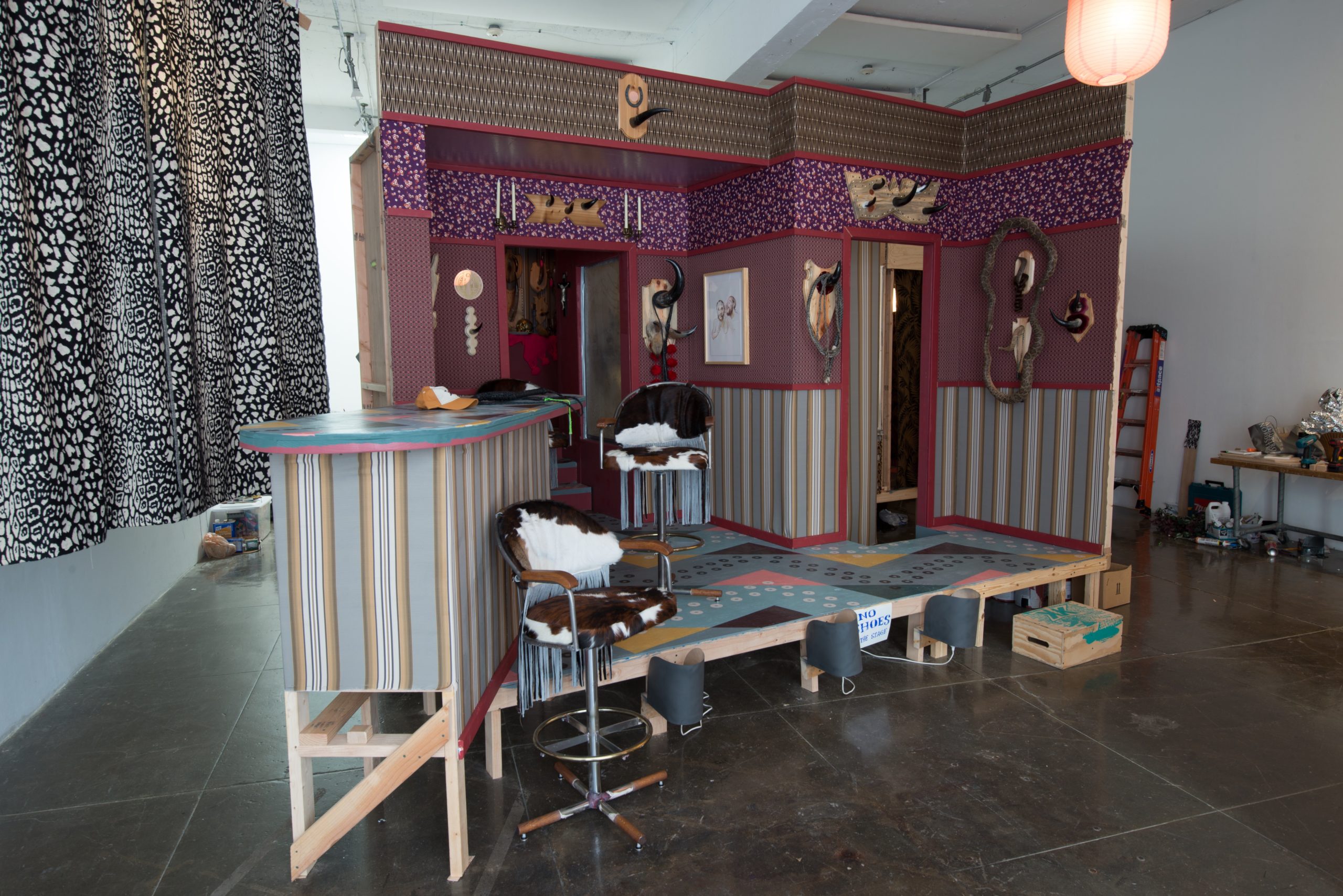 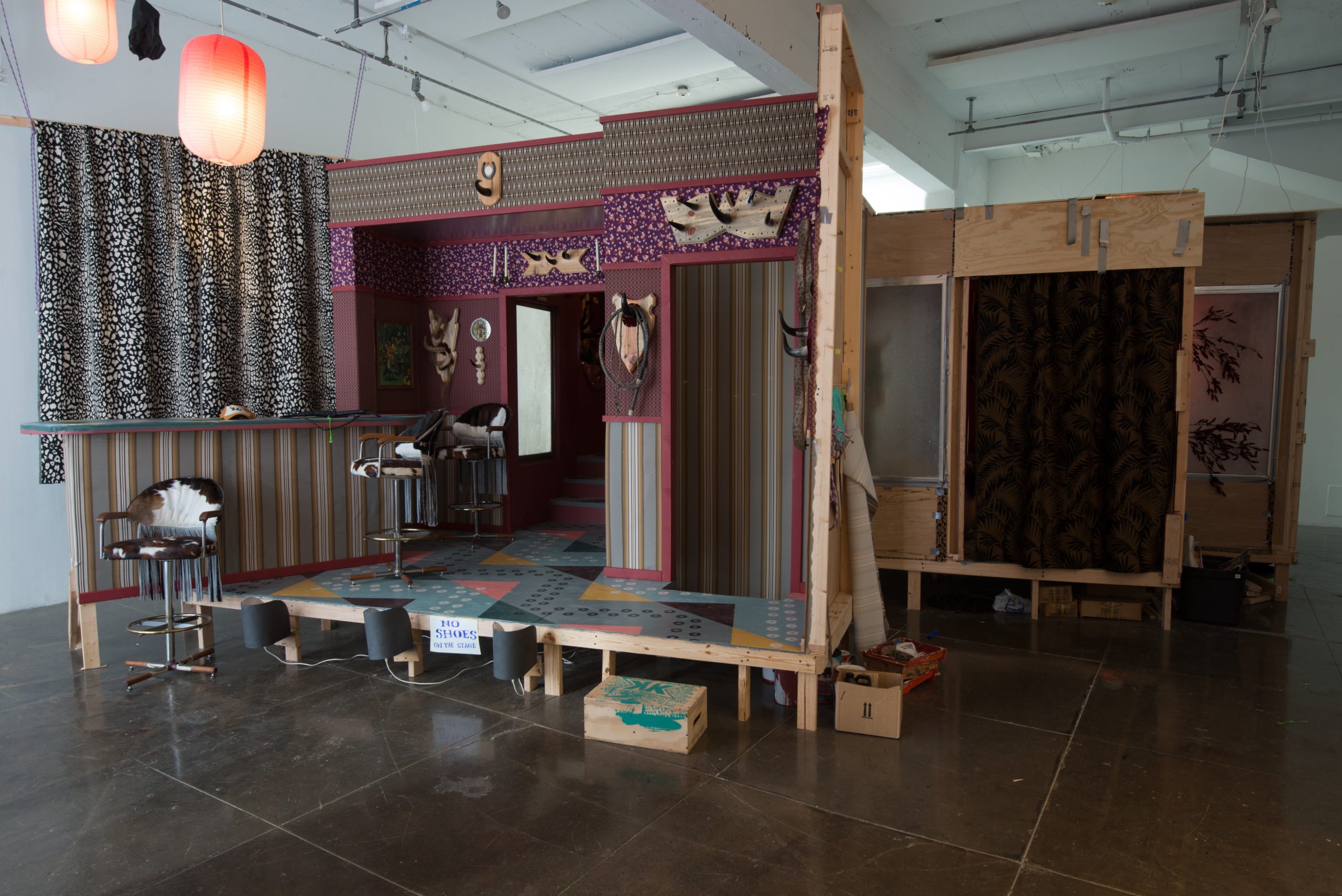 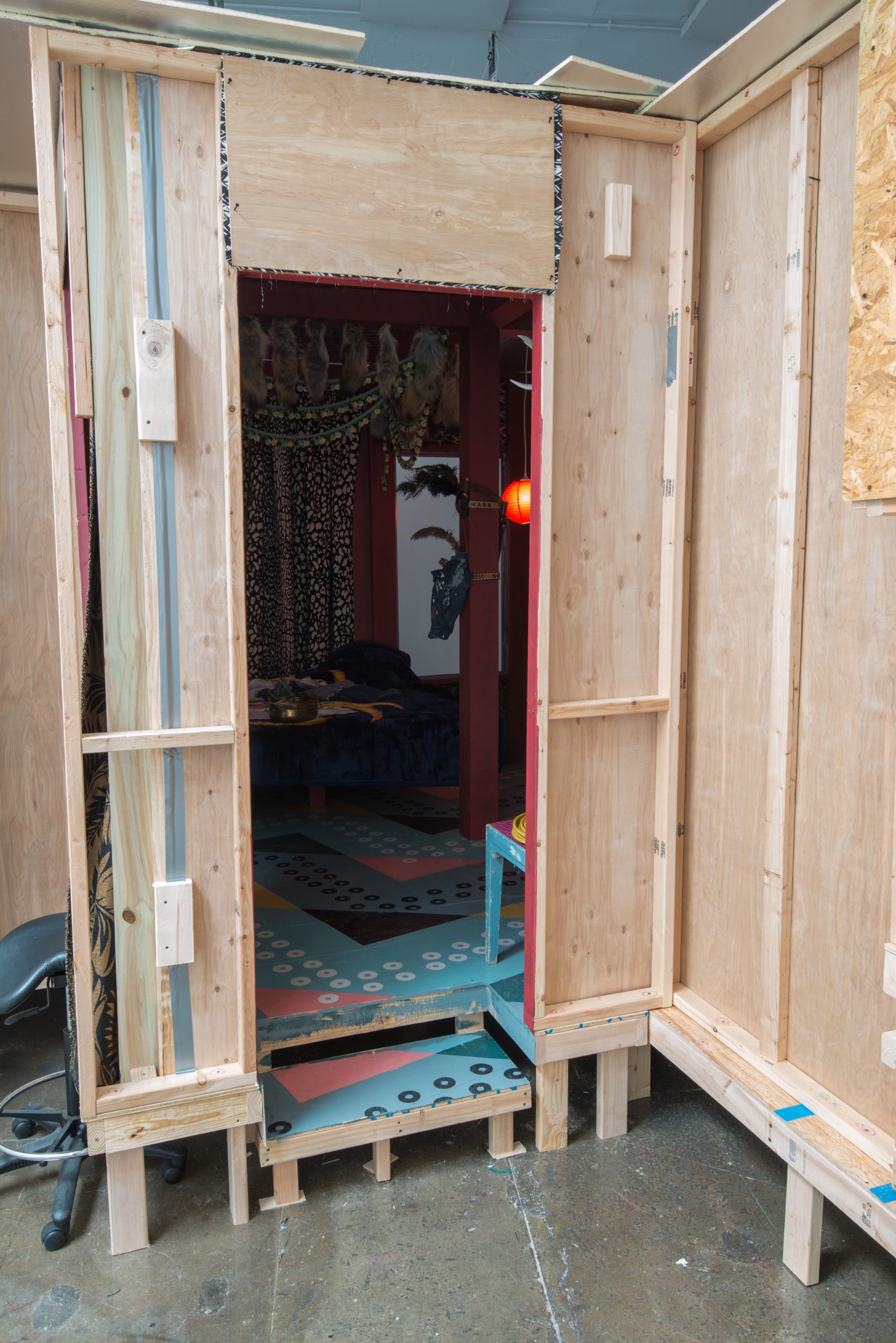 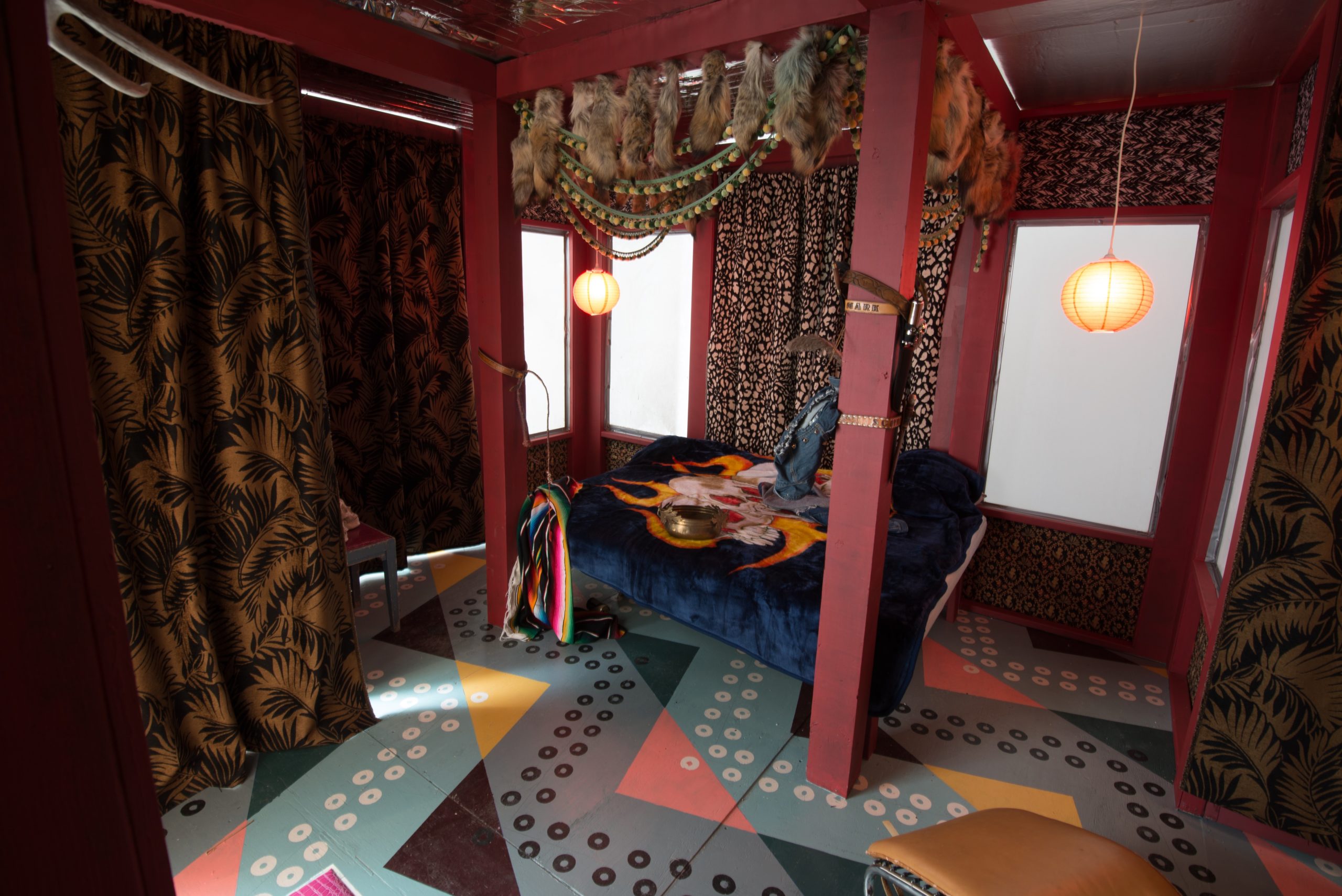 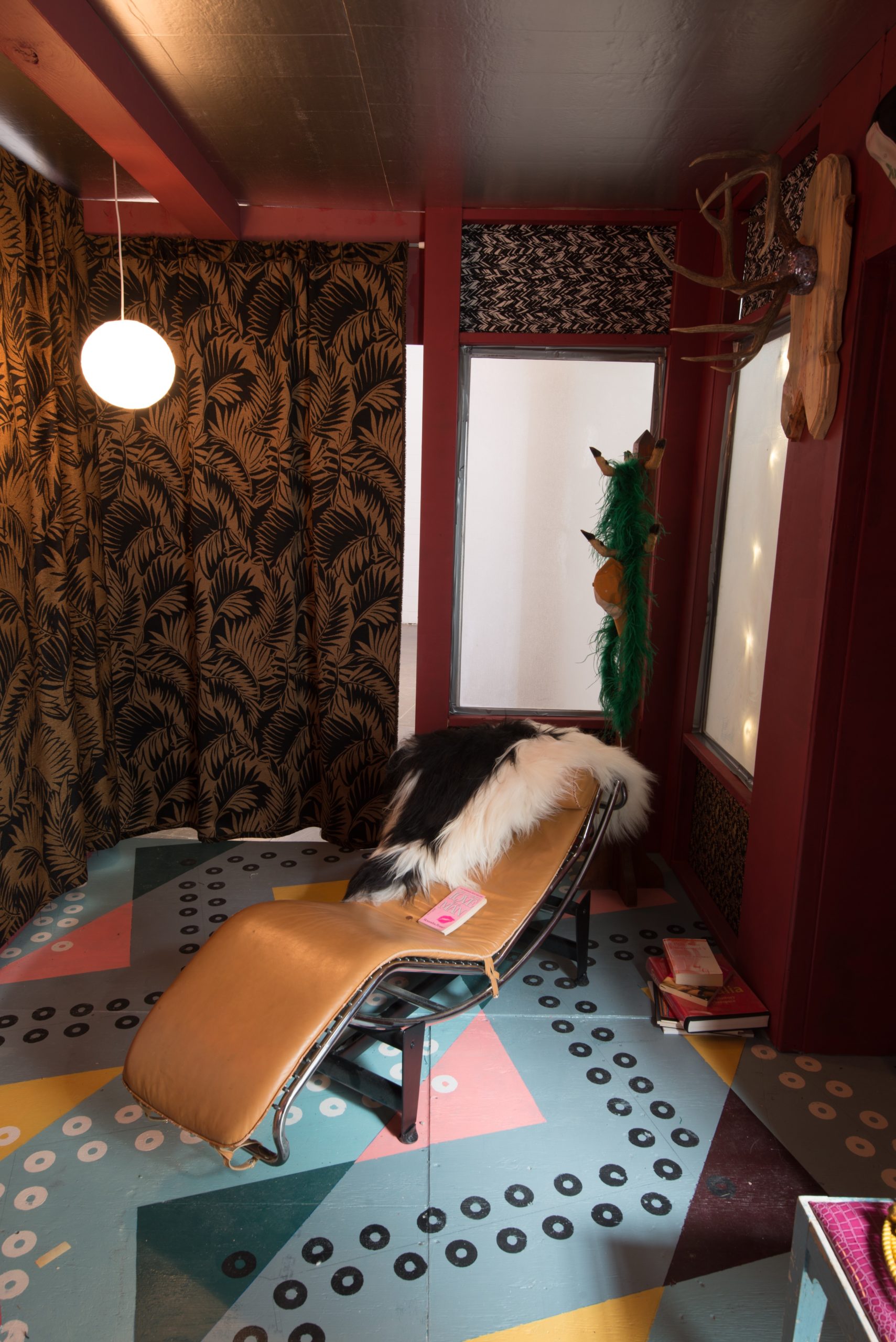 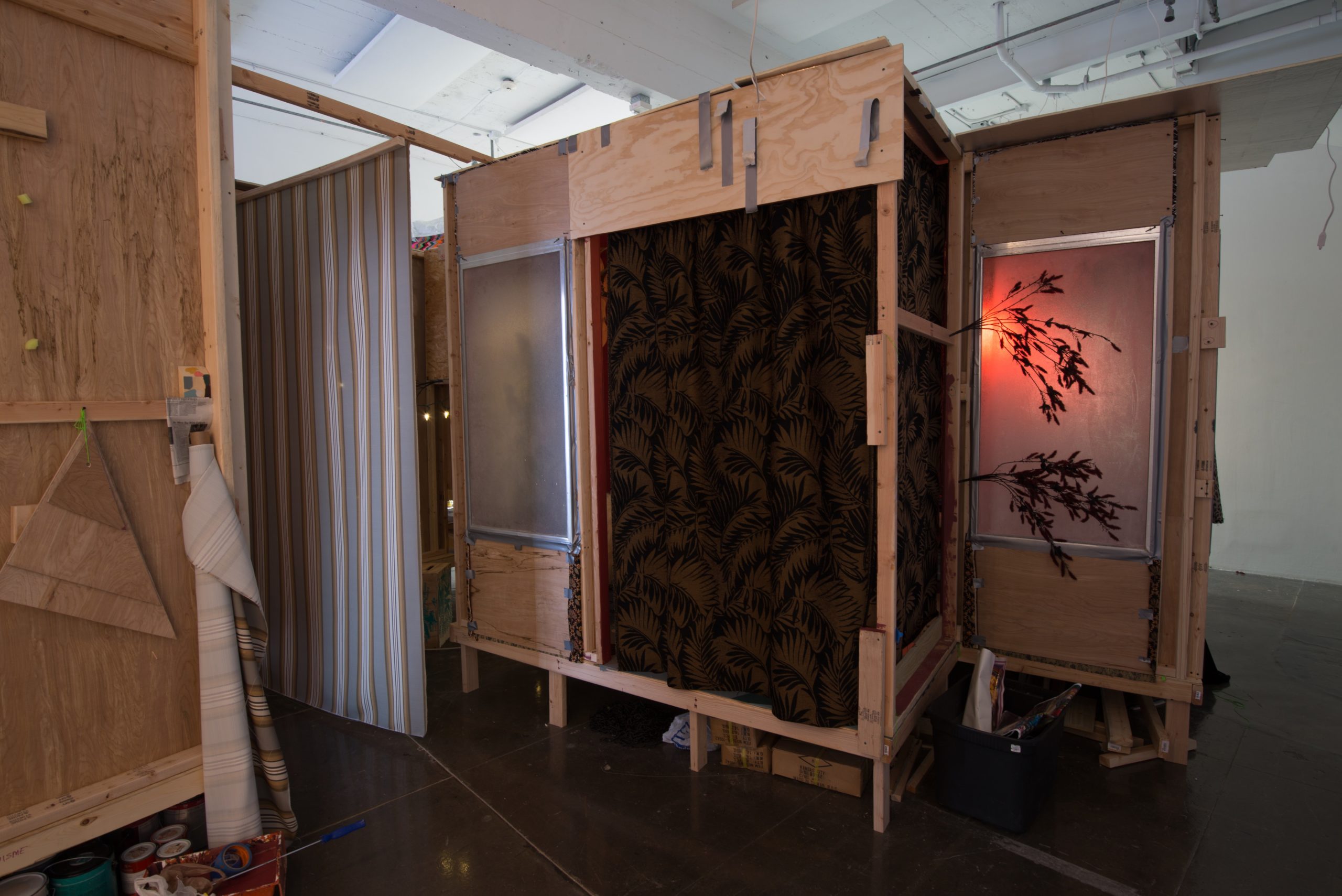 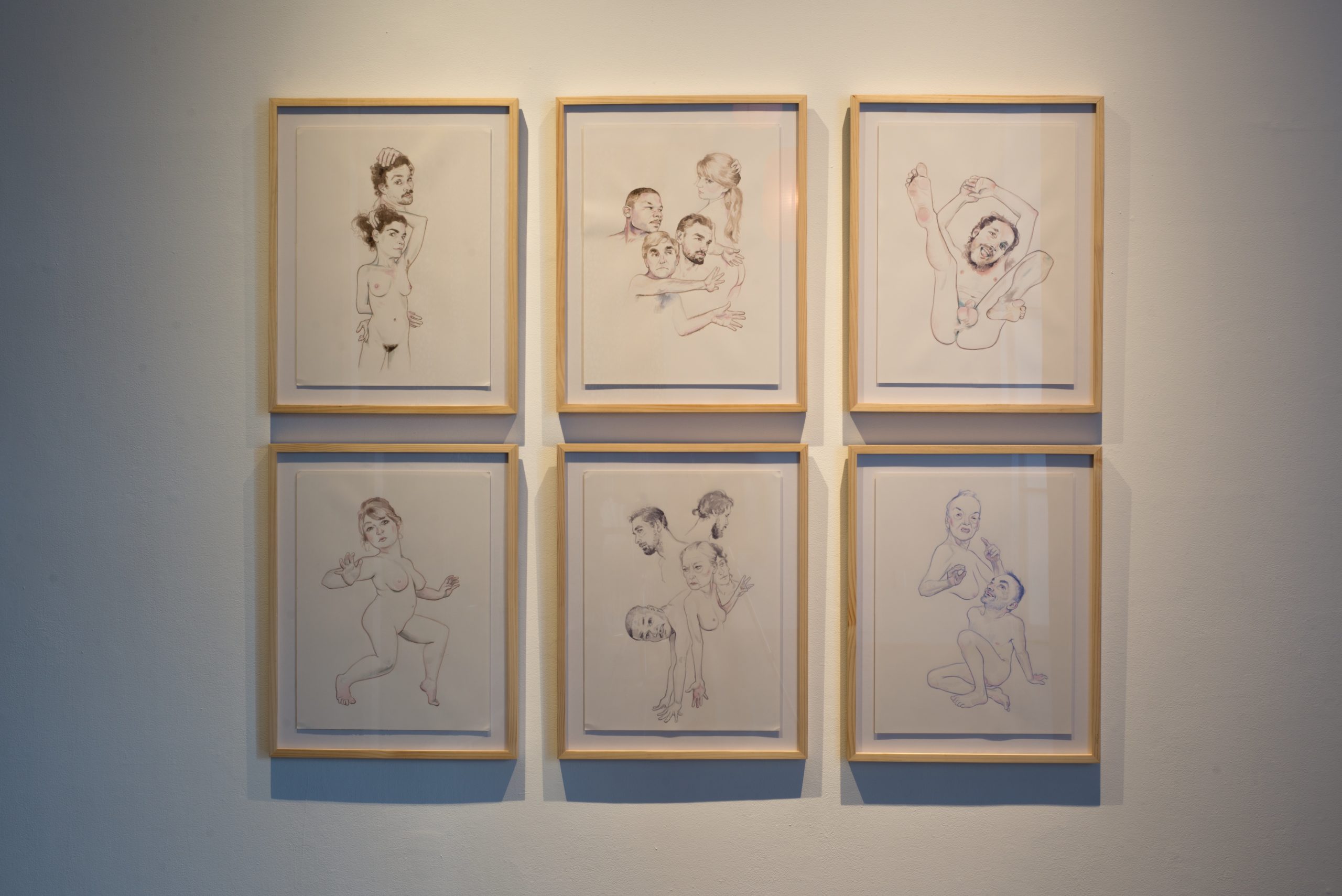 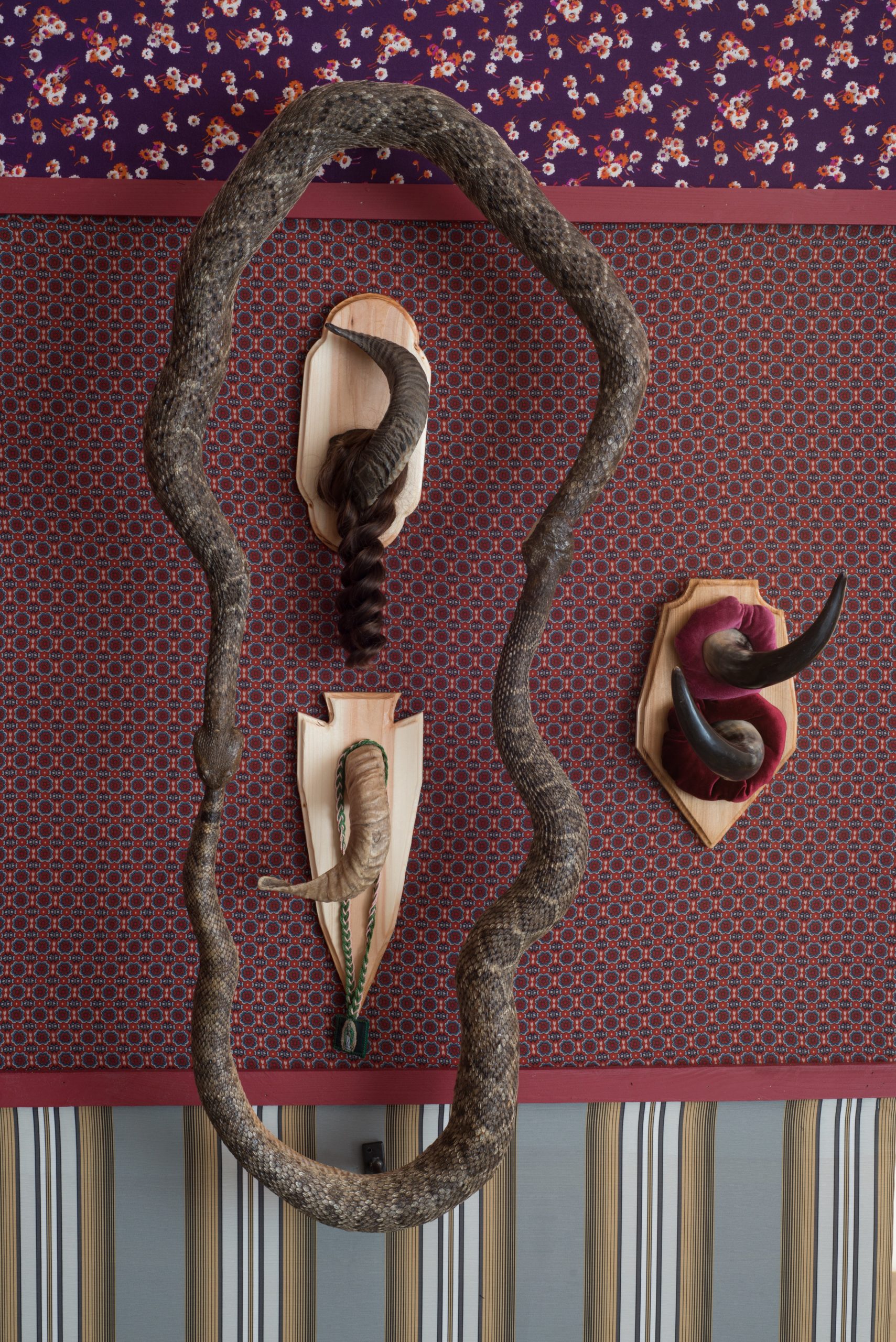 IAIR_HeydFontenotExhibitionImages_CharlieKitchenCredit-8, 2017Heyd Fontenot Unnatural Urges, 2017Source: NIKON D800
How do you plan to utilize the space after the exhibition opens?
I will continue to work in the space after the exhibition opens and use it as a film set. The process of building-out the environment is like stretching a canvas in preparation for making a painting. When the installation is complete and in working order, the filming process can begin. It’s an active, creative space until the exhibition closes and the installation will be disassembled.

You’re mostly known for your drawings. Why did you make a film?
The project I’m doing at Artpace is interdisciplinary. It involves a large sculptural environment that also serves as a film set. Within the environment are pieces made specifically to support themes in the film, everything from the wall coverings to the art, taxidermy, and furniture. I’m also using the environment to engage in more improvisational work with non-actors who will eventually be filmed.

What role does performance play in your Artpace project?
In my work, I often have performers present in an exhibition because I feel they lend context by inhabiting the space and inhabiting a character. This is something I refer to as an “occupied or peopled installation,” which includes elements of “performance.” This is about helping the audience to see more fully my intention with the environment, but I wouldn’t call it performance.

I have worked in film and theater, but I’m trying to find a new way of working. Because of the economic constraints of commercial filmmaking (which are massive), the process for working with large crews and staying on-budget is very streamlined. While this is effective for the Hollywood system, it is immensely restrictive and makes spontaneity in the creative process impossible. In some ways this system is killing cinema. So my approach to making this film is purposefully very different. I’ve been shooting scenes for the last six years, and I refuse to have a deadline, which is an indulgence and a kindness for the creativity of the project.

Why did you choose to work with taxidermists during your residency?
I have a fondness and nostalgia for taxidermy because the home I grew up in and all the homes of my relatives (in Louisiana) had loads and loads of taxidermy everywhere. It’s richly symbolic for me because as a kid I had to go hunting with my dad. I didn’t like it and never understood the appeal, but it was part of my indoctrination into a masculine role that I rejected in various ways. Not only do I currently reject it, but I hold it up for examination. It’s very uncomfortable for many people to examine gender roles and how we may contribute to and support these oppressive, jacked-up notions. Consider for a minute Texas’s own “bathroom bill” and the time and resources spent trying to somehow “defend” gender by punishing people who don’t conform to gender roles. But also more recent topics like “toxic masculinity” where we can see the effects of stringent attitudes to gender negatively affect almost everyone.

Taxidermy can be viewed on various levels. Superficially it’s about a love of nature and the attempt to preserve that animal and its natural beauty. But upon closer examination, you have to realize you’ve just destroyed the thing you love in order to preserve it, so it’s another clumsy attempt by man to conquer nature. These animals are also trophies; “Look at how I kicked this de ’s ass!” And they’re the most primal of trophies, because they’re the parts of animals that we display the same as we did before man had written language, when we literally wanted to harness the power and magic of that animal.

This folds back into the idea that in this “domestic environment” (installation and film set), there is a display of power. This accumulation of conquered animals, which should indicate strength tells you that a powerful character resides here. On the flipside, there is a feeble attempt to display power, because the ways we position and present ourselves socially aren’t infallible. Sometimes a middle-aged man buys a sports car with the hope that he looks virile driving it, yet he becomes a cliché and a joke.

What motivated you to build a space that emulates a domestic interior?
I’ve been thinking about how our domestic lives are constructions. And that’s not to say that they are artificial, but either consciously or unconsciously, we are fabricating our lives. And in contemporary consumer culture, there’s an emphasis on the material and in gathering, stockpiling, accumulating, and staging. We all construct a “nest,” either with a partner or in hopes of attracting a partner. I recently saw a video of a puffer fish making this intricate, geometrically perfect design in the sand to attract a mate. Bowerbirds do something similar—they make a complex and pleasing display to entice a mate. It’s incredible to consider that animals have a design sense or an artistic impulse, but then to see that in a sense we do the same thing with “creating a stage” to act out our domestic/romantic fantasies. Consider how appealing interior design magazines (sometimes referred to as “house porn”) are and how they work psychologically. We project ourselves into these spaces, imagining our perfect lives.

Photo credit Leon Alessi.
At the heart of Heyd Fontenot’s artwork is a protest of dominant cultural perceptions concerning sexual responsiveness and the human machine. He recognizes that mass media exploitations and religious dogmas are designed to manipulate the public by provoking anxiety and encouraging shame. The concerted efforts of both corporations and churches effectively create a false sense of value and morality and Fontenot responds to these damaging effects with humor, empathy and “defiantly gleeful” images. Fontenot is represented by Conduit Gallery in Dallas and by Inman Gallery in Houston. 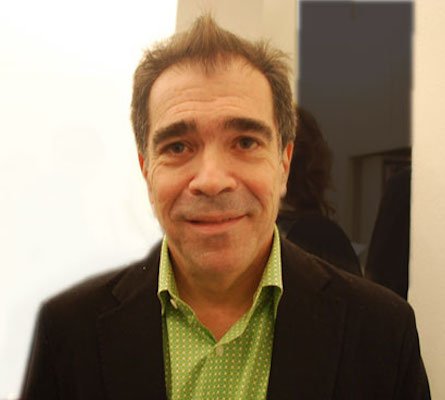 Michael Smith is a performance, video, and installation artist who has exhibited widely at fine art and popular venues, including museums, galleries, theaters, festivals, nightclubs, children’s parties, television, online, and in the street. His work has been shown internationally at Tate Modern and South London Gallery, London; Glasgow International; Mumok, Vienna; Jeu de Paume, Paris; Whitney Museum, Metropolitan Museum, MoMA, New Museum and Greene Naftali Gallery, New York; ICA Philadelphia; and Blanton Museum, Austin. His works are in the collections of MoMA and Paley Center for Media, New York; Walker Art Center, Minneapolis;  Migros Museum, Zurich; Centre Pompidou, Paris; and Centro de Arte Contemporânea Inhotim. Smith has received numerous awards, including fellowships from the Guggenheim Foundation, National Endowment for the Arts, Center for Advanced Visual Studies at M.I.T., New York Foundation for the Arts, Louis Comfort Tiffany Foundation, and Alpert Award in the Arts. He is a Professor in the Department of Art and Art History at the University of Texas at Austin, where he has taught since 2001. Smith lives and works in Austin, TX and Brooklyn, NY. 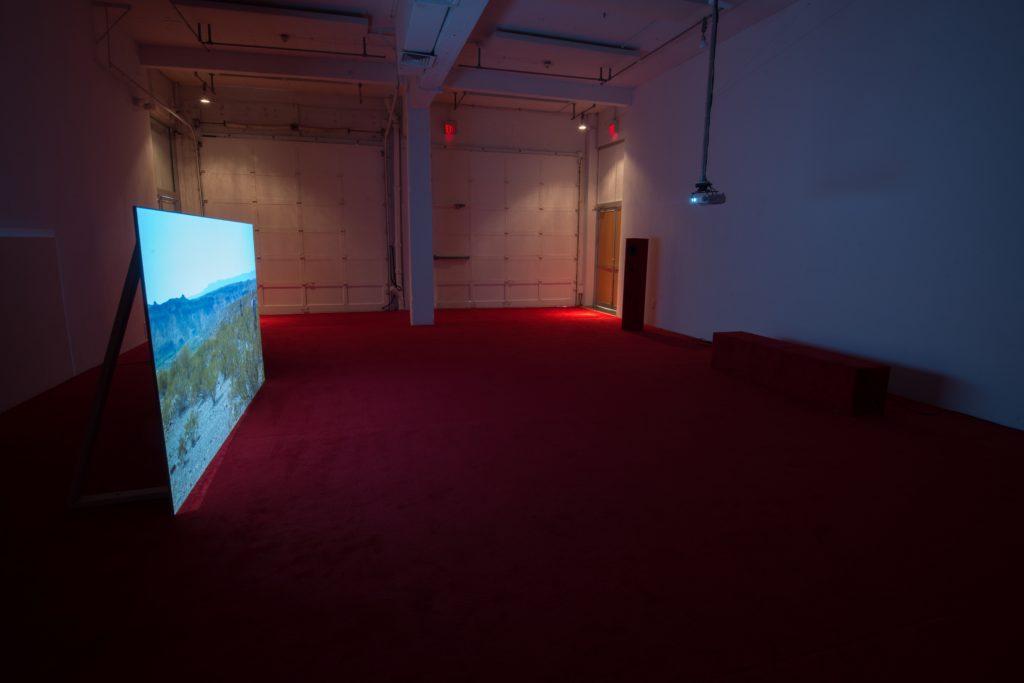 BEYOND THE LAND OF MINIMAL POSSESSION 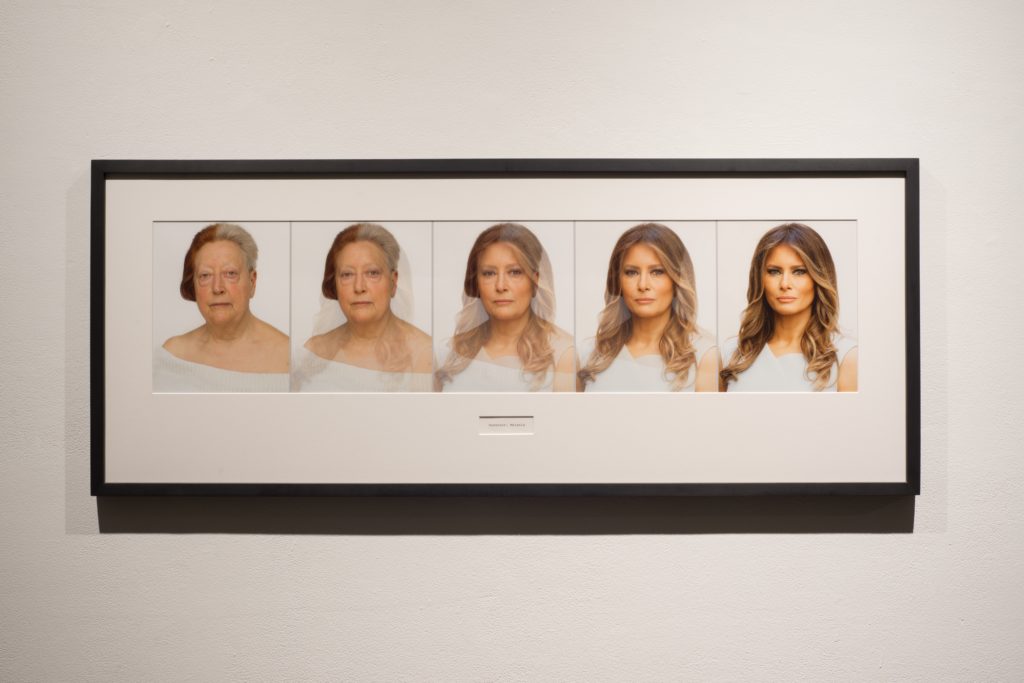