Mamas Don’t Let Your Babies Grow Up To Be Cowboys 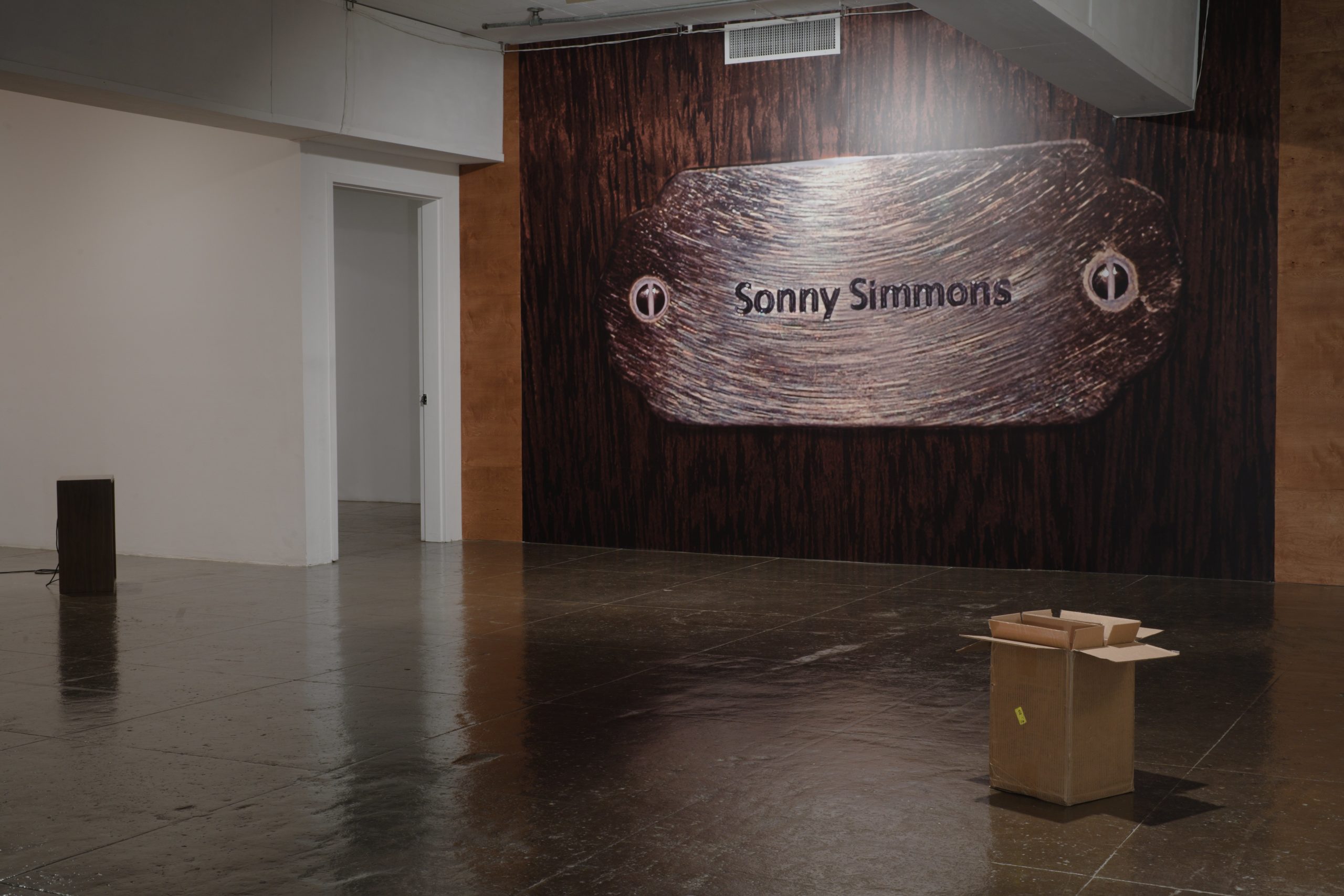 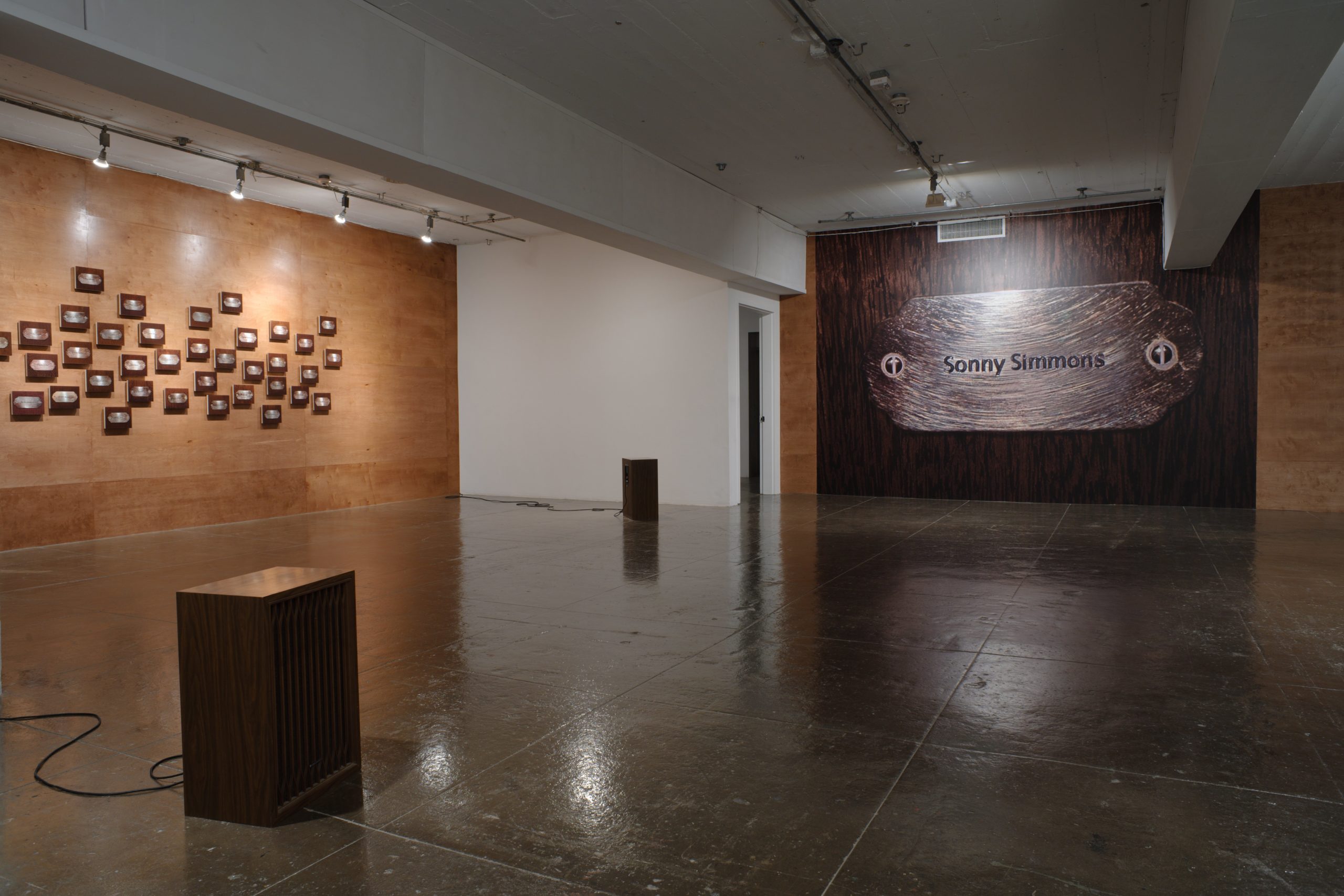 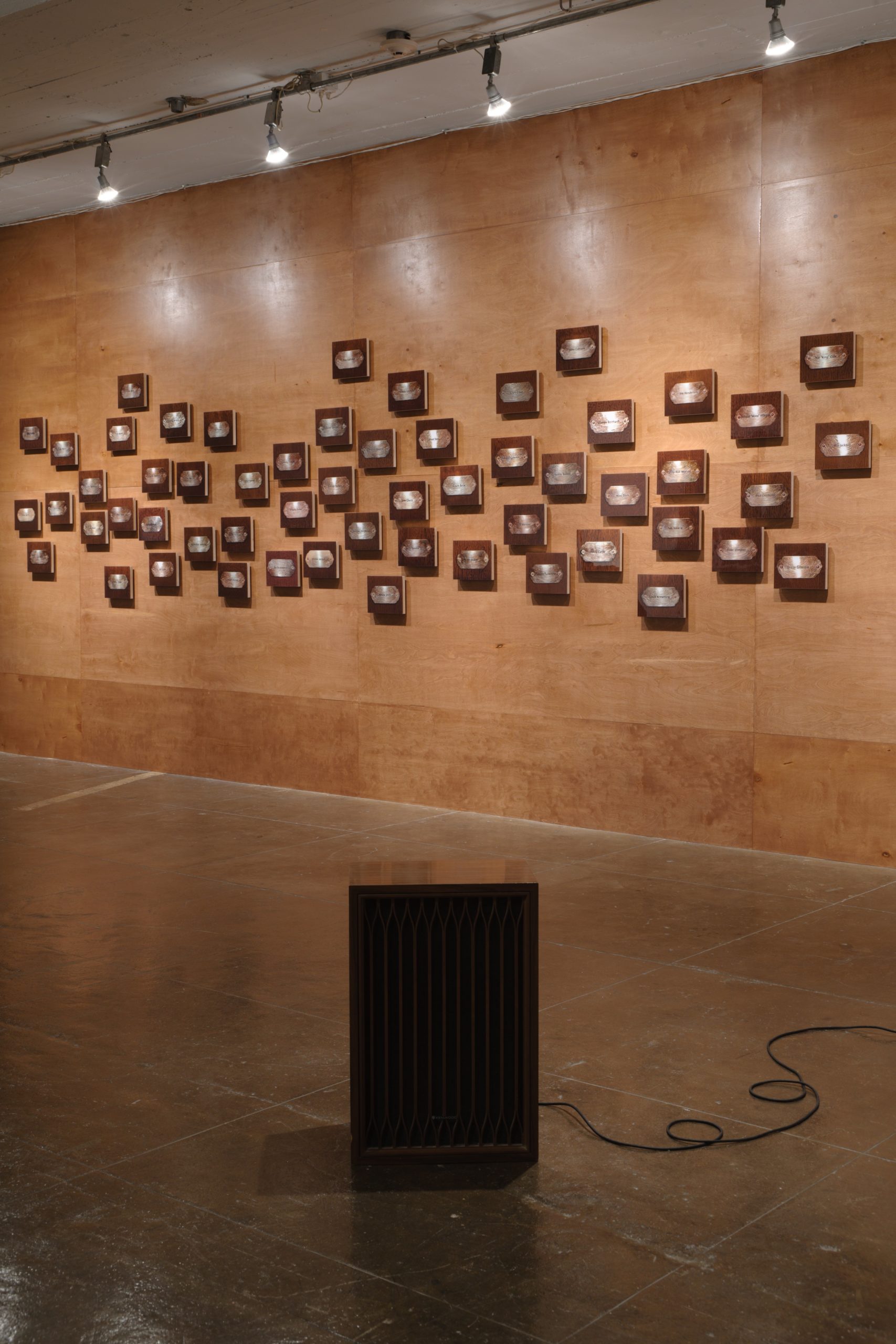 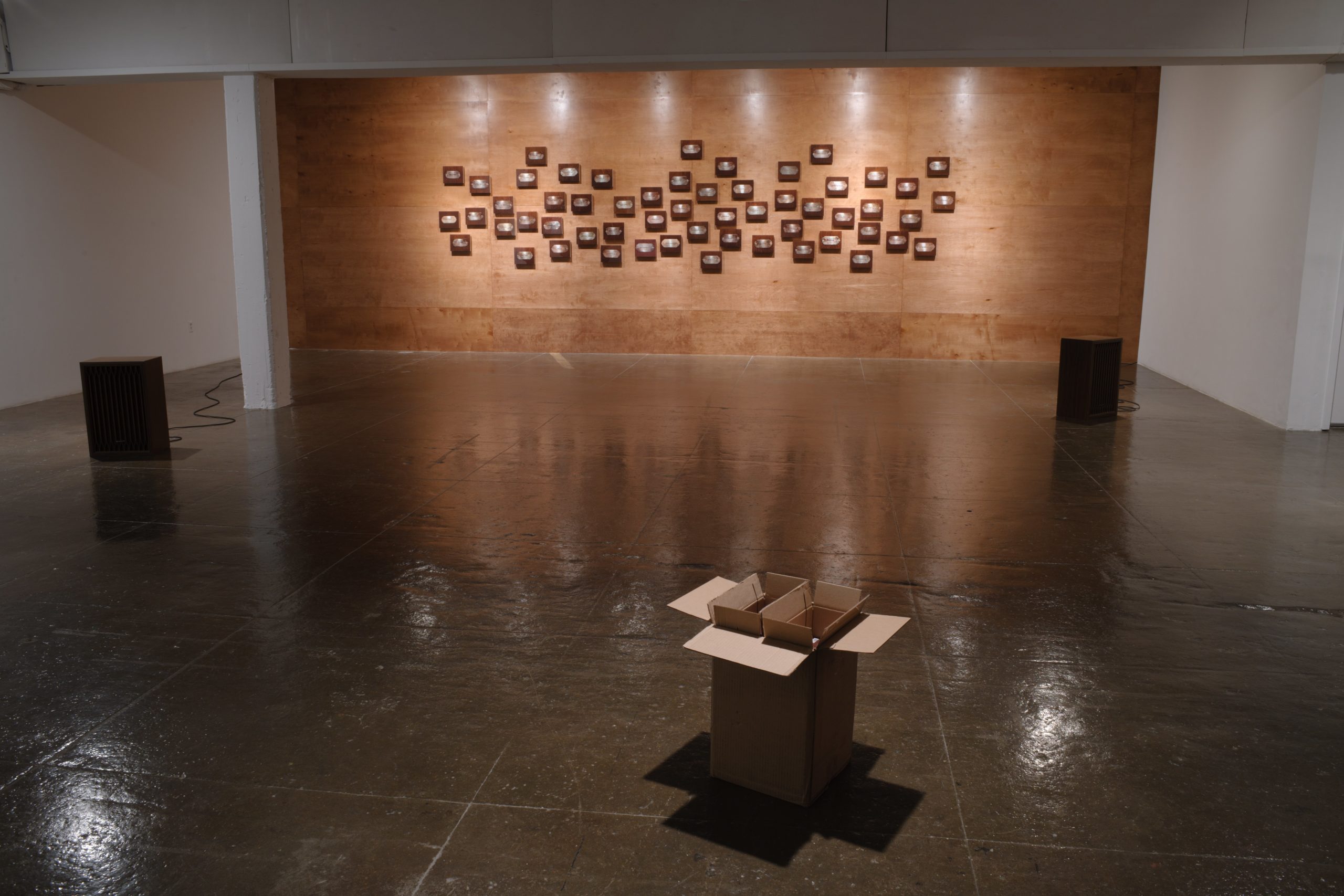 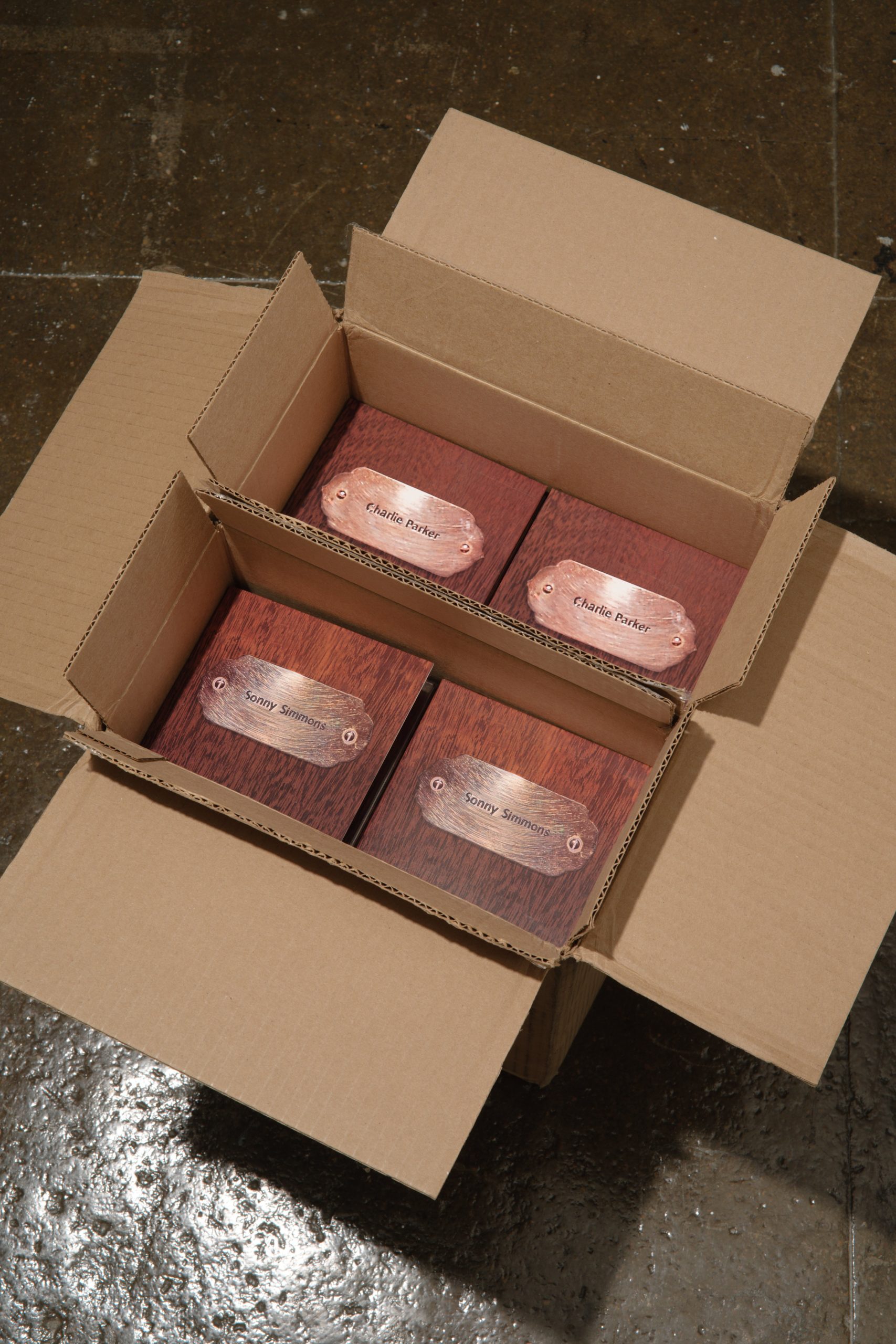 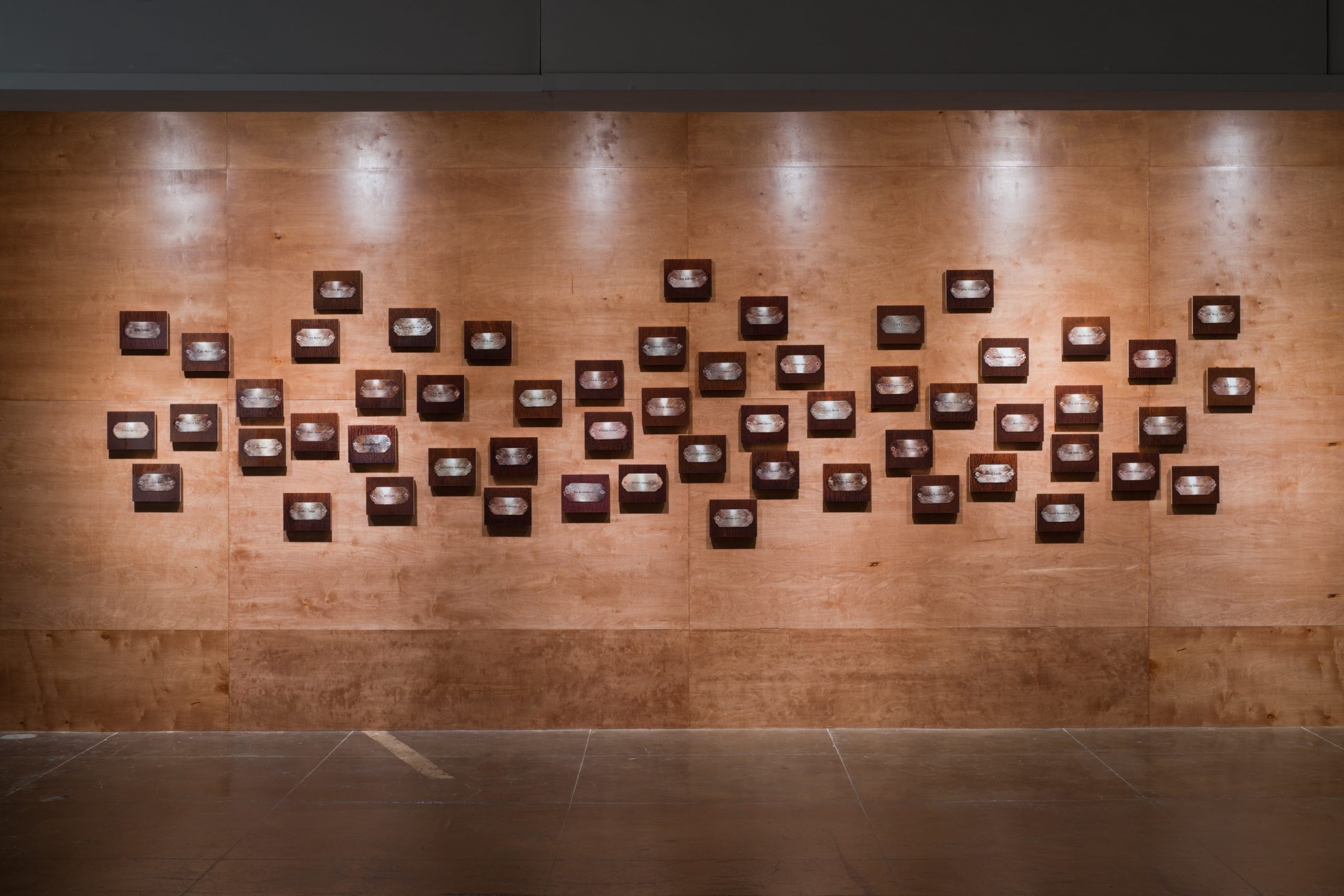 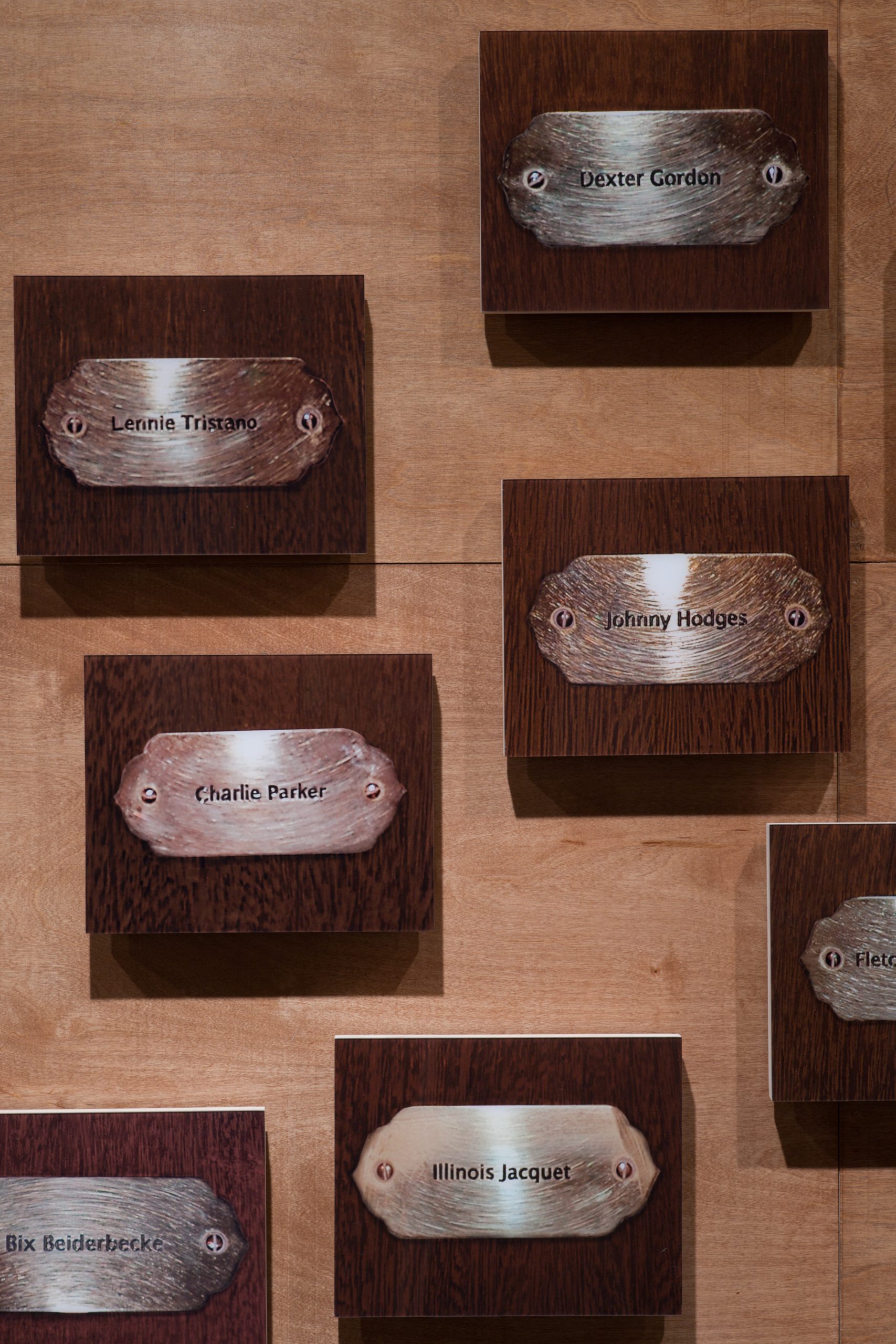 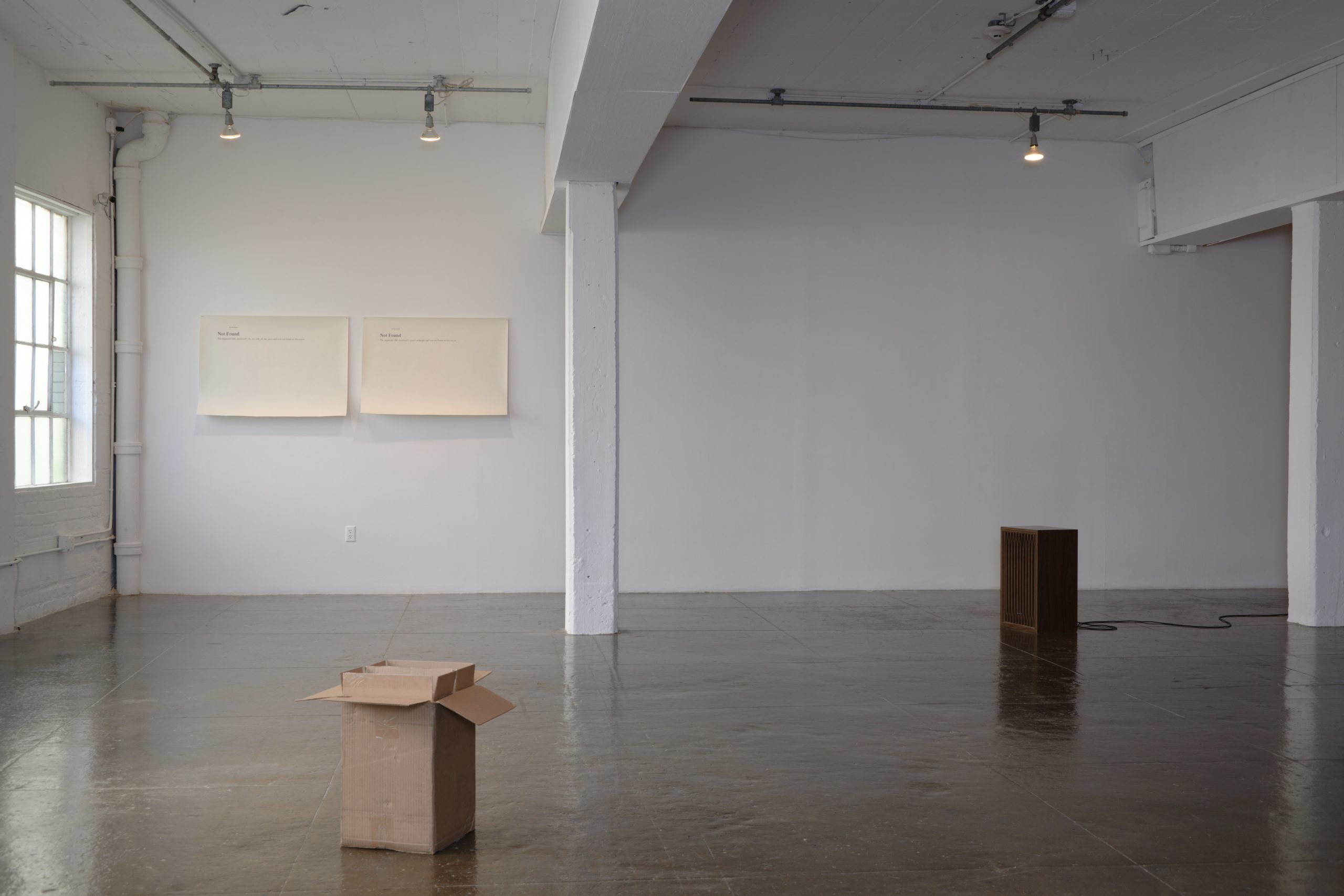 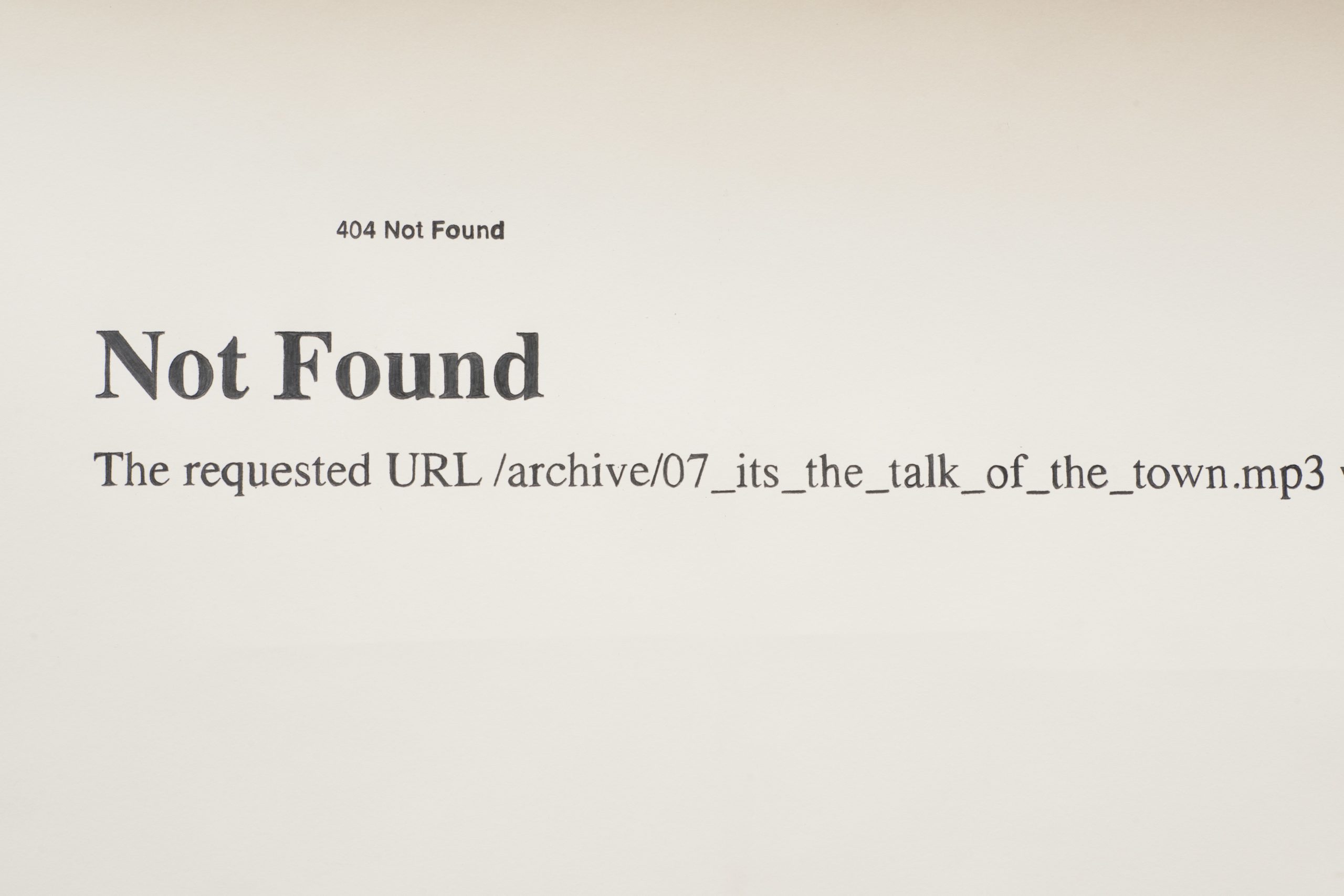 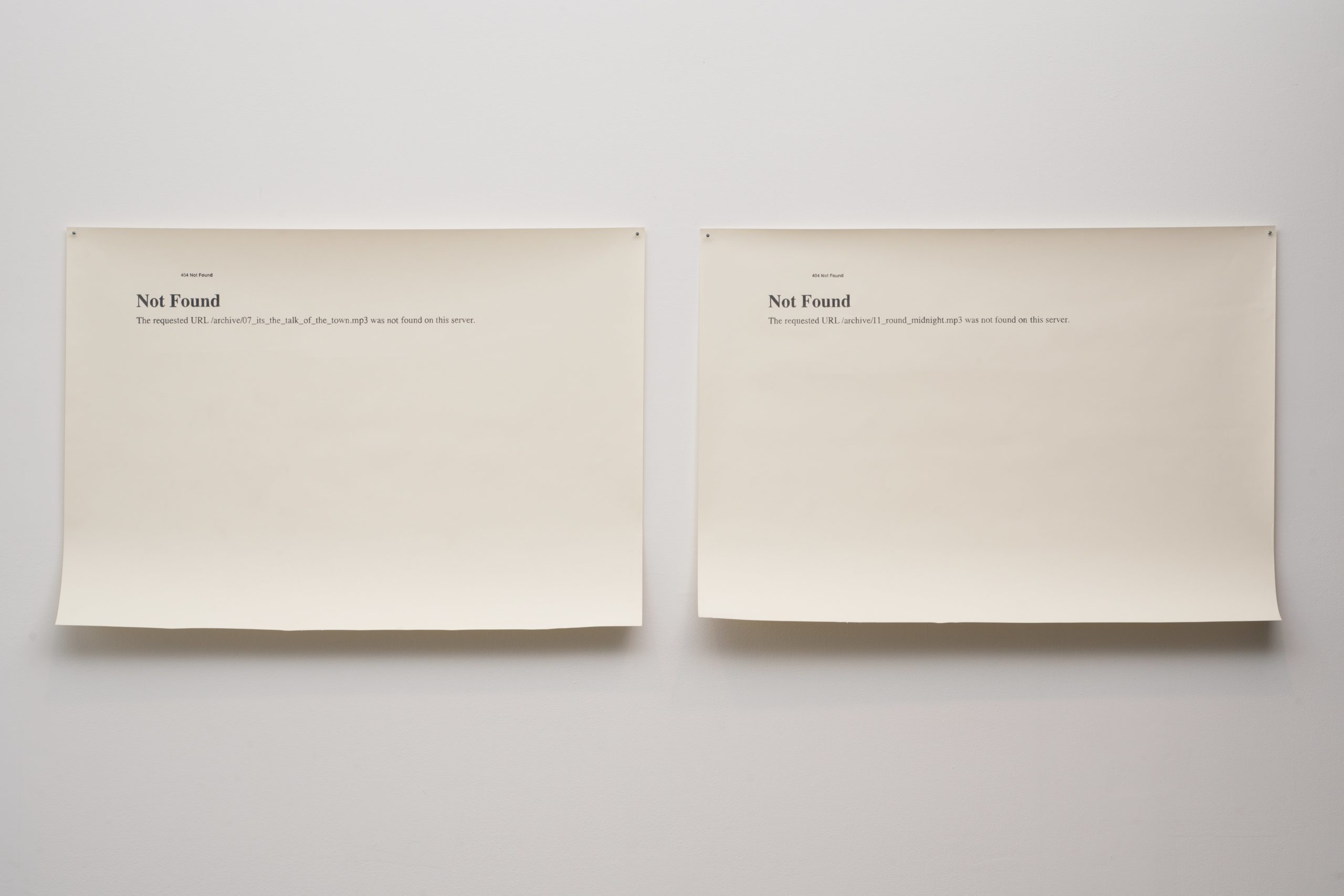 Devon Dikeou’s Mamas Don’t Let Your Babies Grow Up to Be Cowboys continues her ongoing exploration of the complicated relationships among artists, curators, collectors, spectators, and the art that circulates among them. This time the subject is jazz, widely recognized as America’s only native art form. In this exhibition, the artist acts as curator, critic, and detective, and asks that the viewer also take on and learn from these roles.

Spanning the length of a constructed wood-paneled wall in the gallery are 56 color photographs arranged in haphazard, multi-layered rows. Each 8×10-inch image depicts a metal nameplate against a wood background, each shiny plate engraved with the first and last name of an American jazz musician. The photographs, which range from clear and crisp to fuzzy and out-of-focus, are mounted on blocks of stained wood and set behind Plexiglas.

The casual viewer would not easily recognize most of the names on display, many of which are obscure to non-experts in jazz. The only clue to their individual and collective importance is that each was originally memorialized on a metal nameplate, has been photographed, and is re-presented in Dikeou’s installation. Only after spotting iconic names such as Miles Davis or Nat King Cole does the viewer begin to understand that the series is comprised of the names of jazz musicians. Armed with this realization, one could assume that the significance of the few most recognizable names might also apply to those unfamiliar ones displayed next to some of the genre’s greatest musicians. In the same way that a visitor may infer that the artworks collected in a museum are noteworthy and important, the viewer of this exhibition concludes that each musician is deserving of having his or her name commemorated with a photographed nameplate.

As the curator of this makeshift jazz Hall of Fame, Dikeou assumes a position of authority that the viewer must accept or reject. However her expertise is as questionable as her source for the nameplates. Where do they come from and why were they made? Out of hundreds of famous jazz artists, why were these particular musicians selected for display? These questions call to attention the choices made by curators, critics, and other experts who influence public opinion, but whose methods for defining what is worthy of attention are often mysterious to the everyday consumer of culture.

Dikeou has further complicated her curatorial authority by inserting a forged nameplate for Sonny Simmons in the exhibition. A friend of the artist and an influential jazz musician, he was not included in the collection of nameplates she found and photographed. Yet an expansive 17×12-foot photo wall mural of his nameplate is installed near the entrance to the gallery. By including and inflating Simmons’s name among the jazz greats, Dikeou presents a revised history of the genre. In doing so, she challenges the authority of taste and the apparent rigidity of entrenched and historicized popular culture.

Dikeou has complemented the installation by collaborating with Simmons to produce a limited edition CD, Sonny Simmons Quintet Performs the Music of Charlie Parker. Containing covers of the jazz icon’s songs and an oral history piece in which Simmons comments on the 56 jazz greats included in the exhibition, the album enriches the work’s pervasive themes of homage and remembrance. Mamas Don’t Let Your Babies Grow Up to Be Cowboys (which takes its name from another music legend) refigures the history of an art form as flexible and negotiable. Here jazz is subject to the same whims of taste and personal pleasure that make the music itself bad, good, or great. 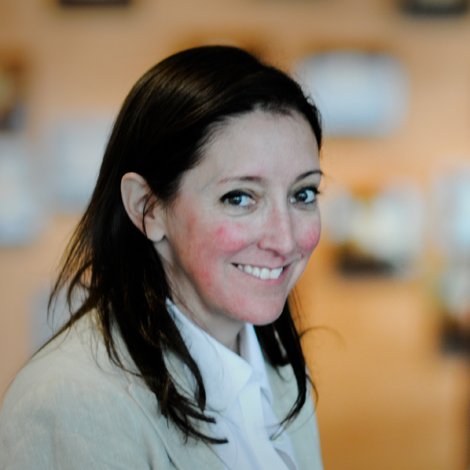 Devon Dikeou is an Austin-based artist, curator, and collector, as well as the editor and publisher of the collaborative curatorial publication zingmagazine, which she founded in 1995. “I have concentrated my artistic efforts in defining the spaces that act as interfaces between the artist, the context of viewing the art gallery/museum/street/magazine-and the collector,” says Dikeou. “The visual means I employ distinctly reiterate or re-enrich Conceptual models in their physical reality, often reinterpreting these models through an autobiographical twist.”
Dikeou received her MFA in 1988 from the School of Visual Arts in New York, New York. She has had many solo exhibitions, including those at Domy Books, Austin, Texas (2010); 179 Canal, New York (2010); artMovingProjects, New York (2008); CANO estudio, Madrid, Spain (2004); and Mamco (Musée d’art moderne et contemporain), Genève, Switzerland (2003). Her recent group exhibitions include Obfuscation, James Fuentes LLC, New York (2010); Re-Accession: For Sale by Owner, The FLAG Art Foundation, New York (2009); and On from Here, Guild & Greyshkul, New York (2009). Dikeou has also participated in numerous art fairs, among them The Independent, New York (2010); NADA Art Fair, Miami, Florida (2010); and Hohenthal und Bergen: Statements, Basel Art Fair 29, Switzerland (1998). 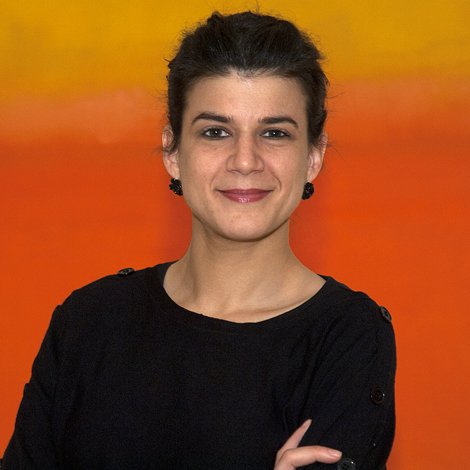 Since 2008, Pesanti has served as Curator at the Albright-Knox Art Gallery, where she has organized curatorial projects including Bad Habits (2009); Artists in Depth: Picasso, Braque, Léger, and Delaunay (2011), and, most recently, Surveyor (2011). She is currently organizing a large-scale historical exhibition on the dynamic cultural scene in Buffalo in the 1970s, scheduled for March 2012 at the Albright-Knox, called Wish You Were Here: The Buffalo Avant-Garde in the 1970s. She is also adjunct professor at the University at Buffalo, where she teaches in the Visual Studies Department. Prior to her position in Buffalo, she was the Assistant Curator of Contemporary Art at the Carnegie Museum of Art in Pittsburgh, Pennsylvania, where she worked onLife on Mars, the 2008 Carnegie International. Pesanti holds masters degrees in cultural anthropology from the University of Oxford, England, and in modern/contemporary art history from New York University’s Institute of Fine Arts.
Photo by Tom Loonan 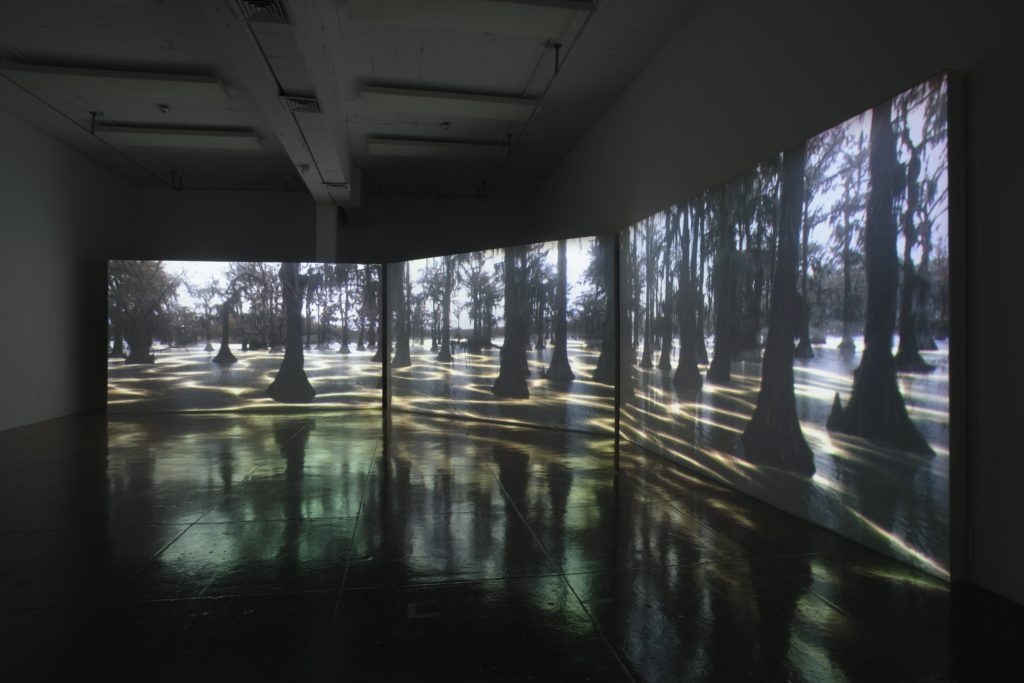 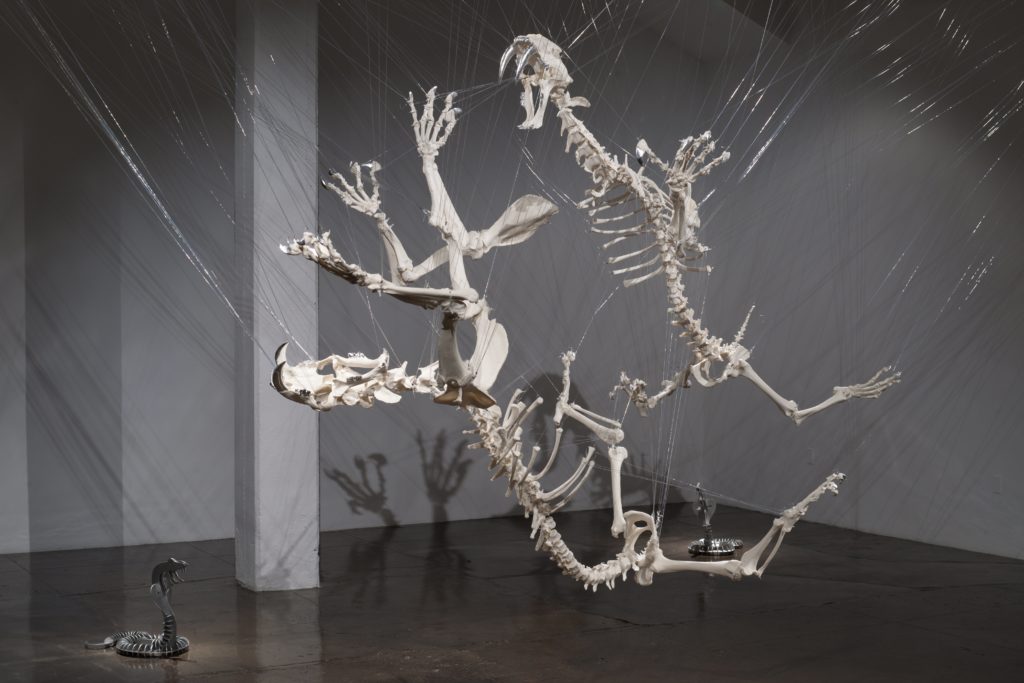